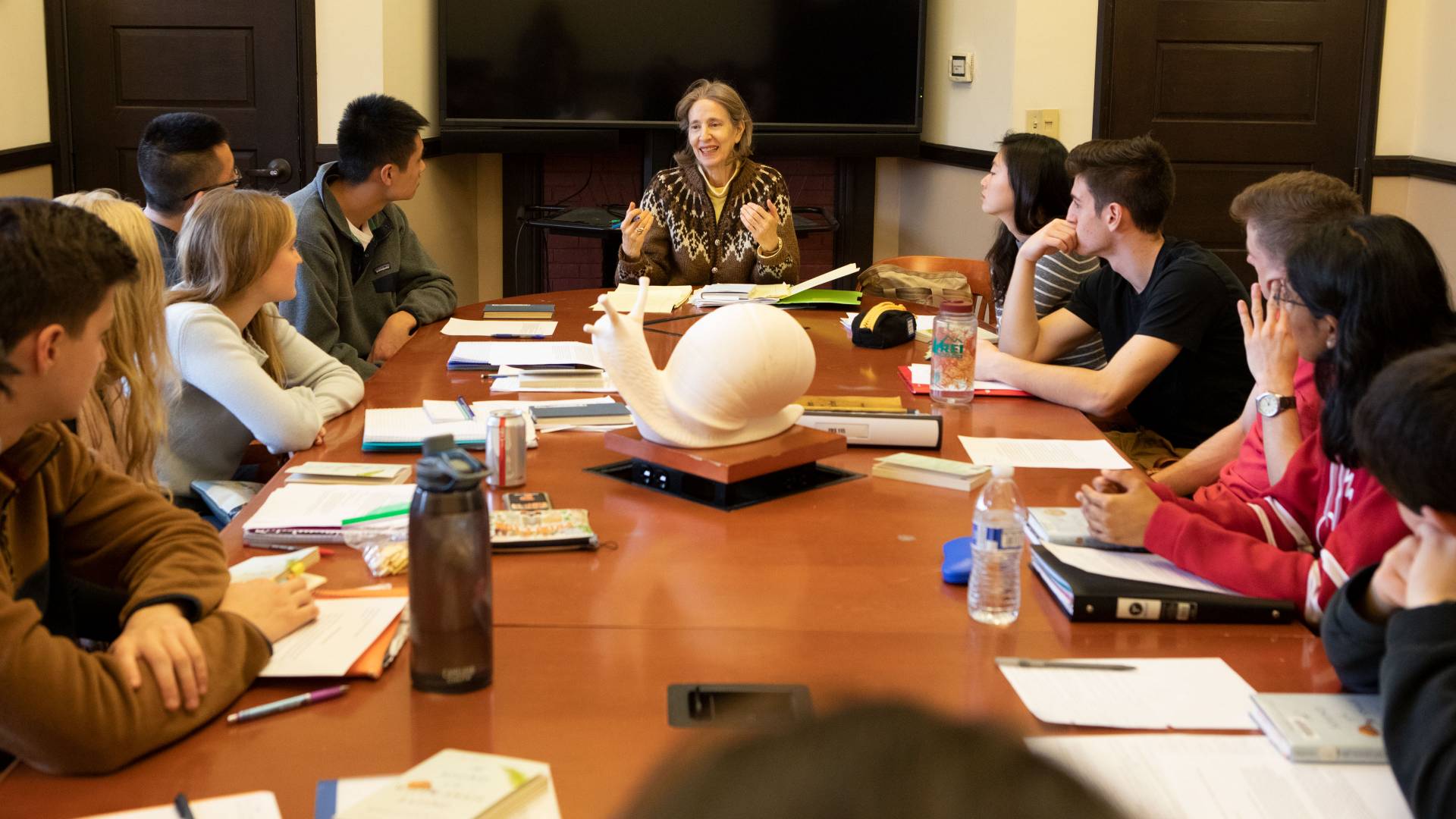 Ellen Chances, professor of Slavic language and literatures (center), leads a discussion in the freshman seminar "What Makes a Meaningful Life? A Search." She designed the course to give first-year students the opportunity "to contemplate what others have said about living a meaningful life, and to reflect upon their own thoughts and questions." The snail at the center of the table depicts the topic of one of the class readings, "The Sound of a Wild Snail Eating" by Elisabeth Tova Bailey.

On a recent Monday, 15 first-year Princeton students sat in a classroom in Blair Hall and contemplated a large ceramic snail in the center of the table.

The topic of the afternoon was "facing personal adversity: resilience and meaning” in the freshman seminar "What Makes a Meaningful Life? A Search." And the snail? A prop inspired by one of the assigned readings — "The Sound of a Wild Snail Eating" by Elisabeth Tova Bailey.

This is the sixth time Ellen Chances, professor of Slavic languages and literatures, has taught the seminar since creating the course in 2013. “I hoped that in this era of overly busy lives, it might be helpful for first-year students to contemplate what others have said about living a meaningful life, and to reflect upon their own thoughts and questions in connection with the topic and with their lives,” she said.

Readings from literature, nonfiction, philosophy, history, psychology and religion — across centuries and different spheres of experience — are often paired with films and documentaries. Reflecting her academic focus, Chances includes several Russian works, such as Andrey Tarkovsky’s film, “Stalker” and an excerpt from Dostoevsky’s “The Brothers Karamazov.” Also taught is an episode from Tolstoy’s “Anna Karenina,” in which, Chances said, Tolstoy “describes the spiritual journey of one character, Konstantin Levin, who is haunted by the question of the meaning of life.”

Each weekly topic looks at life from a different perspective: wisdom of our elders; a response to life’s imperfections; creativity and meaning; love, connection and responsibility; hope, dreams and ideals in societal contexts; and material and spiritual values. 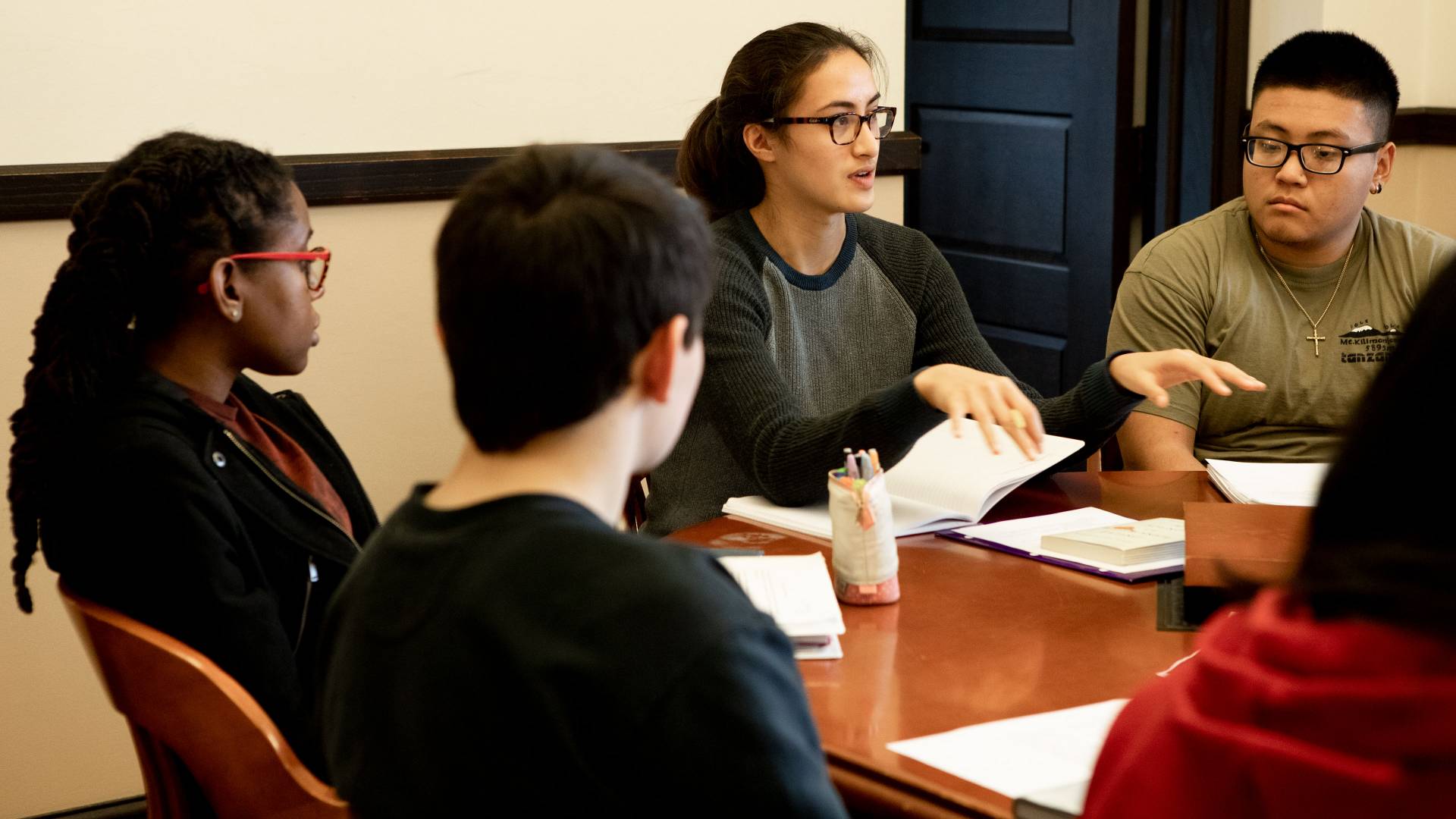 First-year student Maya Keren (second from right) offers a thought-starter question to the group related to the day’s theme of “facing personal adversity: resilience and meaning.” She is seated next to Victoria Laurencin and Eric Tran.

Examining life at a snail’s pace

Bailey's book, part memoir, part nature writing, chronicles one year of her decades-long battle with an illness that keeps her in bed and barely able to move. As Bailey finds herself first observing, then connecting with, a woodland snail attached to an African violet a friend brings her, she contemplates survival, resilience and her own place in the world.

Chances asked the students if they or someone they knew had faced personal adversity. "Did the experience change your perspective on life in any way?"

Slowly at first, then more quickly, their stories tumbled out.

When she was 8, one student said her house was destroyed by a tornado in Virginia, and then she was hospitalized with pneumonia. She said the experience made her value her relationships. She added, “But also, if you're in a good state right now in life, you can never be certain it will stay that way."

Another said his friend has a brother who is severely autistic and requires constant care. "My friend has no self-pity and has a positive view. He always tries to help others. I am inspired by his resilience."

Chances shared her own reaction to the mass shooting in Thousand Oaks, California, the previous week, a town ravaged the next day by wildfires. "Yes, there were people who said, ‘I've lost everything,' but there were also those who said, 'We're alive, we'll rebuild, we'll keep going.' The fact that there is that resilience is really inspiring."

Students bring discussion questions to each class. Noting Bailey's ability to "observe without thinking,” one asked the others if they consider this ability "a kind of ideal."

One student, who plays piano with several jazz ensembles at Princeton, compared her efforts to try meditation this year — which she said also requires observing without thinking — to the “flow” in jazz improvisation. "You shut off the part of your mind that makes judgments. You want a complete flow of ideas from inside your head into your fingers."

This is just the sort of reflection Chances encourages.

“I hope that the students will be connected to the most acutely alive aspects of their beings, those parts that keep growing, searching, questioning, in order to live meaningful lives,” Chances said. “I hope they find fulfillment personally, intellectually, spiritually and ethically, in terms of pursuing authenticity, integrity, sensitivity to other people.” 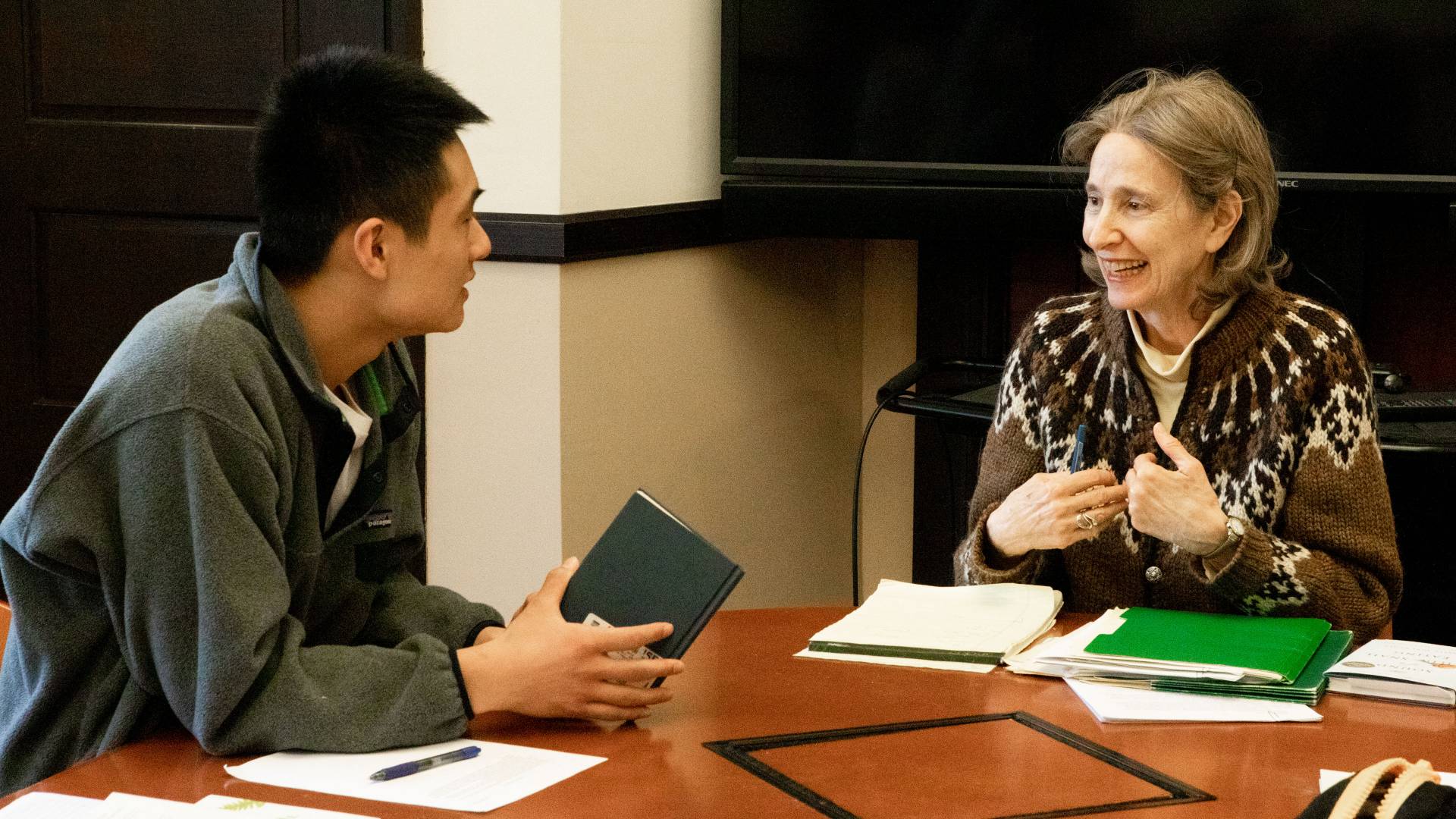 During the break halfway through the three-hour seminar, Kenneth Peng has an impromptu conversation with Chances.

After a break halfway through the three-hour class, the group discussed Akira Kurosawa’s 1952 film “Ikiru (To Live).”

The protagonist, Watanabe, a widow and bureaucrat, is diagnosed with stomach cancer and given six months to live. The film follows Watanabe's journey from quiet despair to purpose — as he navigates a labyrinthine bureaucratic system to turn an area flooded with toxic waste into a playground for children, while hiding his disease from those closest to him.

After the 1923 Tokyo earthquake, Kurasawa's older brother took him to observe the devastation. "He didn't want to look," Chances told the class. "His brother said, you have to face what is. Kurasawa has said he carried that experience with him all his life. He said, you have to confront the difficult things in life. And he shows that in 'Ikiru.'"

The students asked each other a range of questions. “Can misfortune serve as a catalyst for good? Does limited time give us urgency?”

Chances wrapped up. "We don't have to be faced with a fatal diagnosis or get a horrible neurological disease to consider something that becomes very important. ... We all have now, so think about being with the now."

As the students gathered their belongings, she called out with a big smile: "Have a meaningful week!" 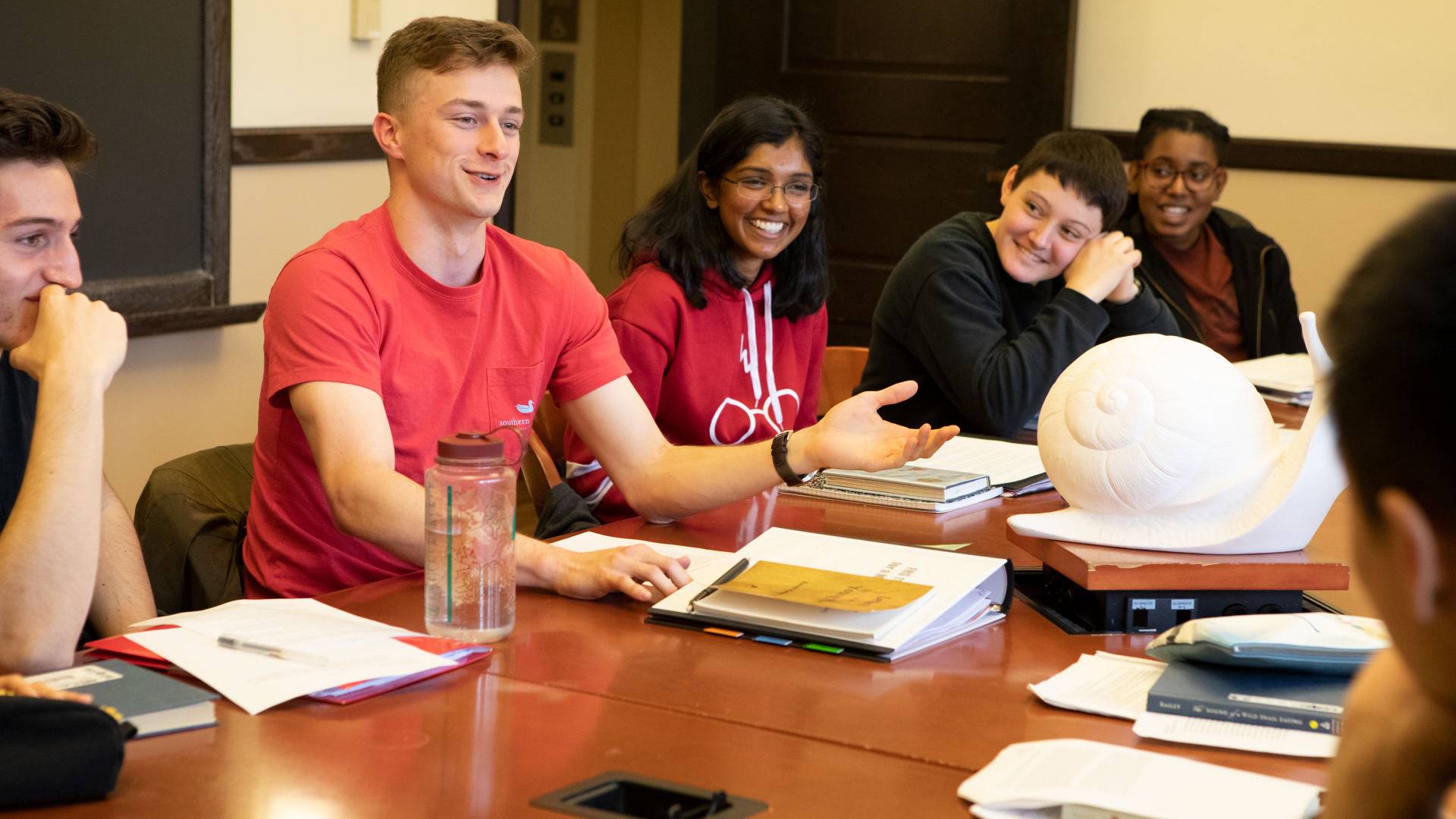 Bennett Thompson (second from left) responds to a fellow student as they share their impressions about one of the readings. Also pictured: Samuel Lee (left), Soumya Gottipati, Isabel Koran and Victoria Laurencin.

The power of questions

Maya Keren said she chose the seminar because she grappled with a lot of “big” questions before coming to college: “What should I do with my life? What is meaningful to study deeply? I believed that this course would allow me to be able to create a foundation of values on which I could base some major decisions going forward in my college career and in life.”

“Oftentimes we don’t come to concrete conclusions after discussing complicated questions,” Mackenzie Caputo said. “The questions give rise to more questions, but I find the investigation process extremely rewarding. As we search for what makes for a meaningful life in this seminar, I find tools that will be extremely helpful when analyzing future decisions.”

Bingjian Li said he was drawn to the idea of “a search.” The class has motivated him “to take classes from different disciplines and to explore more during my academic journey at Princeton.”

Isabel Koran plans to study engineering. "I knew that much of my coursework would be problem sets, resolving questions that have a right answer. I was lured in [to this seminar] by the opportunity to pose questions that dig deeper — in the company of similarly motivated peers and Professor Chances as well as the gigantic voices of literature, history and culture,” she said.

"I have been exposed to films and books that I will likely go back and read many times in my life,” Bennett Thompson said. “This seminar has given me the perspective necessary to begin study here, and the grounding to begin to understand my place and role in a complex world."

This freshman seminar is funded by the University Center for Human Values.