Curbing school bullying has been a focal point for educators, administrators, policymakers and parents, but the answer may not lie within rules set by adults, according to new research led by Princeton University researchers. Instead, the solution might actually be to have the students themselves, particularly those most connected to their peers, promote conflict resolution in school.

A team of researchers from Princeton, Rutgers University and Yale University engaged groups of influential students in 56 New Jersey middle schools to spread messages about the dangers of bullying and school conflict. Using messaging platforms such as Instagram, print posters and colorful wristbands, the selected students were encouraged to discuss in their own voices positive ways to handle conflict, using terms with which their peers could identify.

The research team wanted to test whether certain students, who they label "social referents" or social influencers, have an outsized influence over school climate or the social norms and behavioral patterns in their schools. Social referents are not necessarily the most popular kids school-wide, but rather students who demonstrate influence within their smaller peer group. All activities were designed to test whether, by making their anti-conflict stance well known, these social influencers could shape their peers' behaviors and social norms.

In the course of a year, the middle schools that employed social referents saw a 30 percent reduction in student conflict reports, the researchers report in the Proceedings of the National Academy of Sciences (PNAS). Critically, the greatest drop in conflict was observed among the teams with the highest proportion of social influencers, supporting the researchers' hypothesis that these students do exert an outsized influence over school climate.

"We designed our own curriculum because current programs address problems as defined by adults, and they aren't necessarily fitted to each individual school environment," said lead author Elizabeth Levy Paluck, associate professor of psychology and public affairs at Princeton's Woodrow Wilson School of Public and International Affairs. "We think the best way to change social norms is to have these student influencers speak in their own voices. Encouraging their own messages to bubble up from the bottom using a grassroots approach can be very powerful."

Peers influencing peers is a widely accepted concept. But the question of whether certain, more influential peers have more influence on social norms governing a group is what spurred Paluck and her colleagues to design their test program, the Roots program.

This program is designed to engage the school's most influential students, only some of whom fit the typical profile of a student leader or a popular student, to spread anti-conflict messages. Using a survey measurement known as social network mapping, the researchers are able to identify students with the most connections to other students, both in person and online. These students serve as the "roots" to influence perceptions and social norms in schools.

"The real innovation here is using student social networks to choose the peers ... which can lead to a less unorthodox group of student leaders," Paluck said. "When adults choose student leaders, they typically pick the 'good' kids. But the leaders we find through social network mapping are influential among students and are not all the ones who would be selected by adults. Some of the students we find are right smack in the center of student conflicts. But the point is, these are the students whose behavior gets noticed more."

During the 2012-13 school year, Paluck and study co-authors Hana Shepherd from Rutgers University and Peter Aronow from Yale University were able to implement the study into middle schools across New Jersey. The timing was paramount. Just a year prior, Governor Chris Christie signed a bill issuing a law that required all teachers to have anti-bullying training. The bill was passed without funding.

This gave Paluck, Shepherd and Aronow a chance to offer their program as a training solution. With encouragement from the State Department of Education, they implemented the program in volunteer middle schools, as they were seeing higher rates of student conflict than high schools.

For the purposes of the experiment, half of the middle schools were randomly assigned to receive the intervention, which was training through the Roots program. The schools not selected were given the opportunity to receive free training on how to run the program at the end of the school year.

To pinpoint the most influential students, the researchers distributed a survey to the 24,191 students enrolled at all schools. The survey asked them to nominate the top 10 students at their school who they chose to spend time with, either in or outside of school, or face to face or online. Using these data, the researchers then mapped each school's social networks.

A representative sample of 22 to 30 students in the intervention schools was invited to participate in the Roots program. Only the researchers knew which students within each group were expected to be the top influencers, based on the fact that they were in the top 10 percent of students at their school nominated by their peers in the survey. 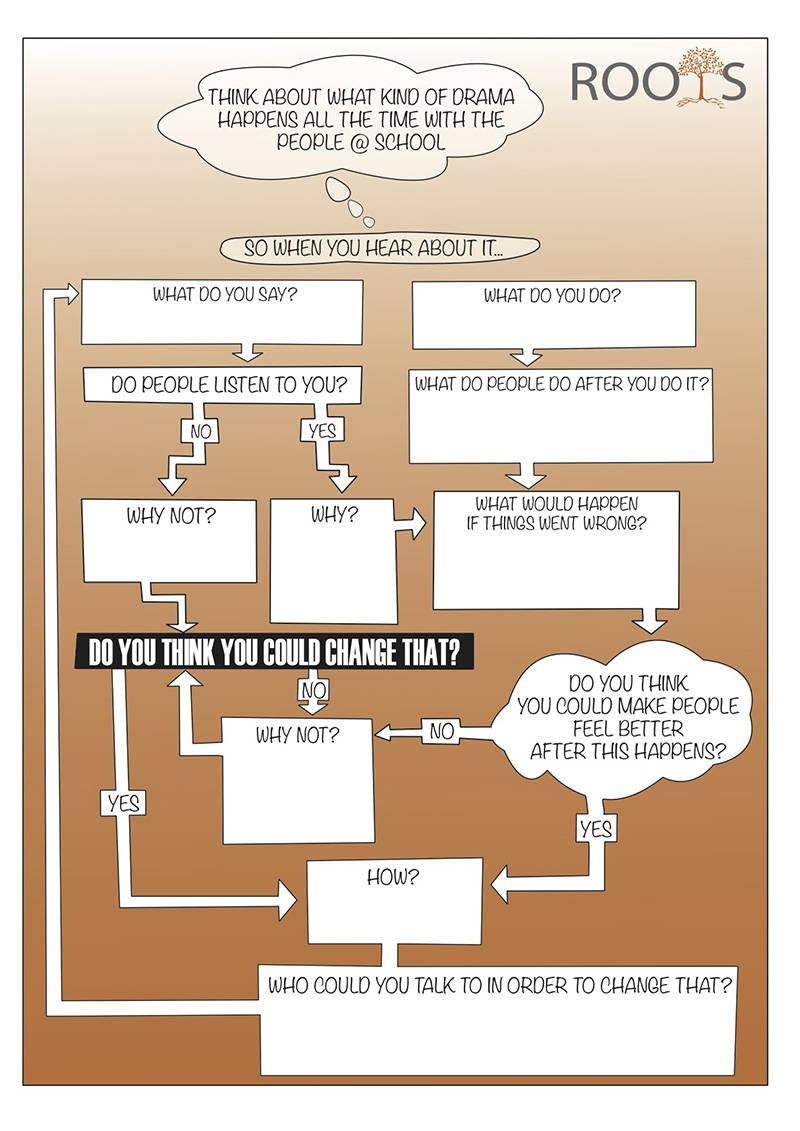 This is a sample exercise that students completed through the Roots program. By completing the exercise, students are able to prepare for potential student conflicts and prepare their reactions. (Image courtesy of Elizabeth Levy Paluck, Princeton University)

These students had some important shared traits, the researchers found. Many had an older sibling, were in dating relationships and received compliments from peers on the house in which they lived.

"This cluster of characteristics suggests that these students are hooked into more mature social patterns in their lives and at schools," Paluck said. "Earlier dating is one indicator, and an older sibling suggests they have more exposure to older students with a more mature vocabulary, perhaps making them savvier communicators. Receiving compliments on their house was a way for us to evaluate their socioeconomic background."

Once the sample of students was selected, they were invited, but not required, to attend Roots training sessions, held during convenient school hours. More than half showed up regularly. The researchers provided students with templates for campaign materials, both print and online, which the students were able to customize. They also trained students in dealing with student conflict.

"We wanted to distinguish ourselves from other school campaigns by letting students lead the messaging efforts. We even wanted the aesthetics of the program to look different," Paluck said. "So we put a lot of value into very clean sharp designs and bright colors. We gave them the templates to work with, and they controlled the messaging."

Throughout the year, the students launched several messaging campaigns. One entailed using hashtags such as "#iRespect" on Instagram, which represented tolerance and conflict resolution. Students printed the hashtags on bright colored paper, which they signed and hung around school, highlighting which students were involved in the effort. 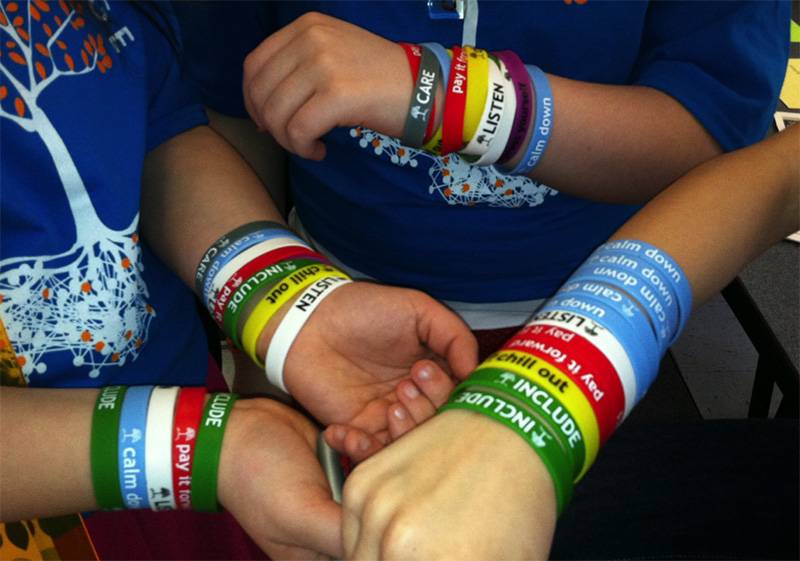 In addition to creating signs, students wore colorful wristbands to spread the message. This photo was taken on Roots Day, a one-day festival in which students promoted Roots through print posters, other multicolored and Roots-themed wristbands, and even the T-shirts they wore. (Photo courtesy of Elizabeth Levy Paluck, Princeton University)

Another campaign used brightly colored rubber wristbands, which remain very popular among adolescents, Paluck said. These orange wristbands included the Roots program logo and came with a tag that said, "A Roots student caught you doing something great." Each Roots student received 20 wristbands and when the student saw a peer intervening in a conflict or helping another student, he or she gave them a wristband.

Among the most popular campaigns was Roots Day, a one-day festival in which students promoted Roots through posters, other multicolored and Roots-themed wristbands, and even the T-shirts they wore. There were giveaways, and students asked others to sign a petition to do something nice for someone at school.

"Roots Day made the Roots program and the Roots students enormously salient to all of the other students at each school," Paluck said. "Students loved the giveaways and were clamoring to sign the petition. It brought everyone in the school together and seemed to unify their attention and energies in a big way."

After this yearlong effort, the authors found stark statistical differences between the schools that had participated versus those that hadn't. On average, schools participating in the program saw a 30 percent reduction in disciplinary reports. Because each conflict can take up to an hour to resolve, this reduction is equivalent to hundreds of saved hours.

"Our program shows that you don't need to use a blanket treatment to reduce bullying," Paluck said. "You can target specific people in a savvy way in order to spread the message. These people — the social referents you should target — get noticed more by their peers. Their behavior serves as a signal to what is normal and desirable in the community. And there are many ways to figure out who those people are and work with them to inspire positive change."

For more information about the Roots program or to implement it into your school, visit the Roots website.

The paper, "Changing climates of conflict: A social network experiment in 56 schools," was published in PNAS Early Edition on Jan. 4. Funding for this project came from the WT Grant Foundation Scholars Program, the Canadian Institute for Advanced Research, Princeton Educational Research Section, Russell Sage Foundation, the National Science Foundation and the Spencer Foundation. None of the authors are affiliated with the New Jersey school system or received compensation for this research.

The experiment was registered at the Experiments in Governance and Politics site prior to the analysis of outcome data. The research was approved by the Princeton Institutional Review Board (Case No. 4941). 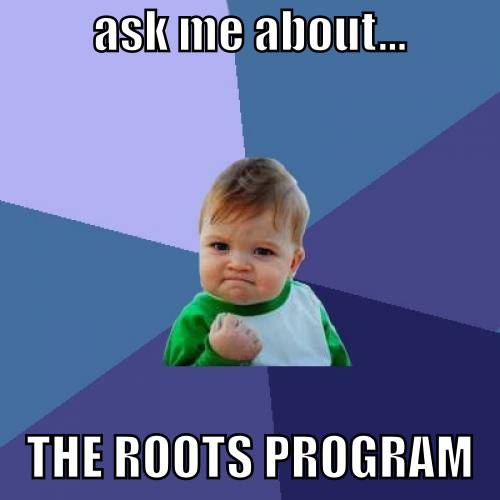 Students created print poster and Instagram images to spread the word about the Roots program. This is an example of a "campaign" created by an influential student. (Image courtesy of Elizabeth Levy Paluck, Princeton University)