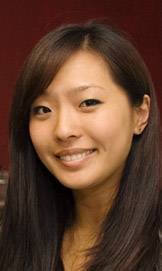 For her senior thesis in psychology, Julia Yang evaluated the effectiveness of behavioral messaging by conducting a flier campaign in four dorms that encouraged students to unplug their appliances before leaving for winter break. Yang's project will be used as a model for continuing sustainability awareness endeavors at the University.

With dorm rooms mostly empty and a snowstorm blanketing the Princeton campus, senior Julia Yang and a hardy group of student environmentalists spent three hours on the first morning of winter break combing residential halls for signs of energy savings.

This effort was the centerpiece of Yang's senior thesis, in which she tested the effectiveness of behavioral messaging aimed at encouraging students to conserve resources. Yang, a psychology major who is pursuing a certificate in environmental studies, used a flier campaign to study whether manipulating how messages are presented would change student behavior.

"This was a really good field experiment for me, because it does have practical implications and it can be applied in so many ways on college campuses and with different environmental initiatives," she said.

Yang collaborated on the project with faculty adviser Elizabeth Levy Paluck, the Office of Sustainability, Students United for a Responsible Global Environment (SURGE) and the Department of Undergraduate Housing. In addition to providing insights into research on behavioral theories, Yang's thesis will be used as a model for continuing sustainability awareness endeavors at Princeton.

"It was a phenomenal effort and paved the way for future collaboration in the science and practice of sustainability campaigns on campus," said Paluck, an assistant professor of psychology and public affairs.

Toward the end of the fall semester, Yang worked with her collaborators to craft an e-mail that was sent by the housing office to residents of 716 dorm rooms seeking their participation in a "sustainability audit" of their rooms. The e-mail asked students to unplug their refrigerators and televisions as they left for break, building upon the "Pull the Plug!" campaign created in 2006 by SURGE and Greening Princeton, another student group. 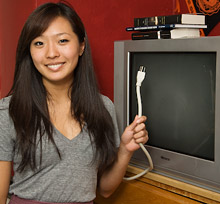 Yang found that students who received fliers with her specially designed messages unplugged their appliances at a higher rate than those who received a generic flier or no flier. She said it was rewarding to see that "my messages did have some kind of positive impact on energy conservation."

Yang designed six fliers to hang on the doors of 472 rooms in 1901-Laughlin, Scully and Bloomberg halls and Forbes College whose residents agreed to participate in the audit. The fliers had the same visual design and roughly the same number of words, but each carried a different message framed to test certain behavioral theories.

To gauge the effectiveness of social norms messaging, which explores how people may conform to group identity, some fliers noted that 75 percent of all Princeton students or previous residents of a particular dorm room had "pulled the plug." Another flier said the Daily Princetonian student newspaper would publish the results of how many residents of a particular hall unplugged their appliances.

Yang also devised messaging to test prospect theory, a method typically used to examine economic decision-making behavior, by including messages that "Princeton will lose energy" if dorm residents did not unplug or "Princeton will gain energy" if they did. Other students received a generic flier that simply urged students to "save the environment," while others received no flier.

The project suffered a minor setback when a snowstorm hit campus as winter break began, leaving some students in their rooms temporarily and reducing the study's sample size. Yang's team -- including 16 volunteers from student environmental groups, representatives from undergraduate housing and Shana Weber, manager of the Office of Sustainability -- ultimately inspected 372 rooms on Dec. 19.

"The sample is not as big as we hoped, but considering it's a pilot study of an initiative that people can build upon next year, it's still pretty useful," Yang said. 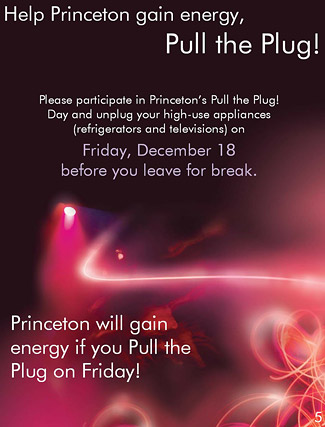 Yang studied the effectiveness of prospect theory, a method typically used to examine economic decision-making behavior. This theory was tested by devising messages that "Princeton will gain energy" if dorm residents unplugged their appliances or "Princeton will lose energy" if they did not. (Image: Courtesy of Julia Yang)

Yang found that 38 percent of students who have a refrigerator or television in their rooms did unplug them. While there was not a major distinction in the effectiveness of social norms messaging versus prospect theory messaging, she found that students responded more strongly to both types of messaging than the generic flier or no flier.

"It was really rewarding to actually get results, to know that -- no matter which one was most effective -- my messages did have some kind of positive impact on energy conservation," she said.

"Julia's done an admirable job analyzing her results," she said, noting that Yang learned new techniques to examine complicated datasets. "She plowed through some dense statistical reading I gave to her, used graduate student help and worked with me on the analysis and interpretation."

Paluck added, "She designed the messages to retest some promising techniques and to test one theory (prospect theory) that, to our knowledge, has not been applied very often to sustainability behaviors. Both theories boosted unplugging in the dorms. We weren't sure what to expect, so this was an advance -- food for thought, and for future testing."

Weber noted that Yang's research will benefit the Office of Sustainability's efforts to encourage individuals on campus to save energy.

"Work like this can give us a glimpse into how sustainability communication and education efforts on campus can actually result in behavior change," Weber said. "The more we can partner with students and faculty who are interested in researching these ideas, the more effective we will be in achieving the culture shift needed to reach our aggressive sustainability goals."

Yang, who is from Silver Spring, Md., currently is exploring her postgraduate options and may pursue environmental law studies after a few years in the work force.

Yang conducted her experiment with help from adviser Elizabeth Levy Paluck (right), an assistant professor of psychology and public affairs, as well as student environmentalists, the Office of Sustainability and the Department of Undergraduate Housing.