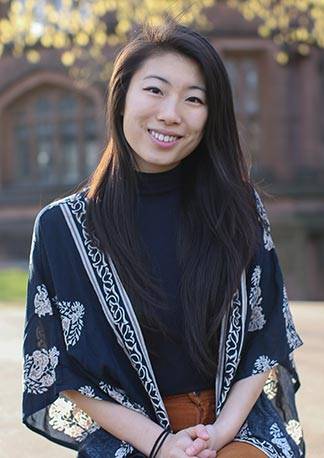 As Princeton University senior Lisa Gong completed her internship at the Boston Health Care for the Homeless Program in the summer of 2015, she said goodbye to a patient she had come to know named Betsy.

Thanks to the Martin Dale Fellowship, Gong may have the opportunity to reconnect with Betsy as the ecology and evolutionary biology major travels the country for a year working in programs that provide health care to the homeless and capturing the lives of patients through documentary photography and video.

"The main goal of my project is to dispel unfair judgments against those experiencing homelessness and to elevate an awareness of the common ground we all share as humans existing together," Gong said. "I think everybody deserves the opportunity to be understood on his or her own terms. It's an overly idealistic sentiment, sure, but I hope that this project can at least somewhat help to project the voice of a population that typically goes unheard."

"One of the primary criteria for the Dale Fellowship is that it have transformative potential, and Lisa's project exemplified this goal," said Matthew Lazen, the fellowship's adviser and director of studies at Butler College. "Lisa intends to be a doctor, and the year she spends photographing homeless patients with the Dale will enrich her medical practice by focusing a compassionate regard on the personal lives of people under medical care. "

Gong said her experience at Princeton has helped her develop and explore two interests combined in her Dale project: disparities in health care access and visual storytelling.

As a sophomore, she participated in a Breakout Princeton trip that focused on HIV/AIDS and the intersections of poverty, social inequality and activism in New York City. That trip was sponsored by the Pace Center for Civic Engagement. Pace, the Center for Health and Wellbeing and the Keller Center supported her Boston internship through the Princeton Internships in Civic Service. She is focusing on health-care issues through her senior thesis, which models HIV and Hepatitis C co-infection in at-risk urban populations.

In addition, Gong has volunteered or worked at a Tennessee hospital's cancer center, a research lab at Vanderbilt University and a New Jersey hospice program. She is also a peer health adviser through University Health Services.

Gong said her interest in photography emerged during her freshman year and intersected with her academic work when she took a seminar called "Liberation Photography/The Engaged Photographer," with Richard Steven Street, a documentary photographer, historian and the fall 2014 Anschutz Distinguished Fellow through the Program in American Studies.

"The class really expanded my understanding of photos as vessels for storytelling rather than as standalone pieces," Gong said.

Street said Gong embraced the image-driving storytelling techniques discussed in the course by exploring the challenges of Faith Konigbagbe, a member of the Class of 2015 who was born with underdeveloped legs.

"By submerging in Faith's world, Lisa learned about bravery, determination, humor, companionship, and the physical and emotional challenges of overcoming obstacles most of us normally brush off," Street said. "Rather than a predicable narrative of struggle against adversity, Lisa discovered how a student in the face of adversity was able to lead a full, happy and productive life."

Gong, a member of Whitman College, has been a senior photographer and assistant photo editor at The Daily Princetonian student newspaper and is a lead producer at 1080Princeton, a student-run photo- and video-journalism group. She was also a photo director for Spoon University.

Gong is finalizing the itinerary for her Dale project but plans to work with groups affiliated with the National Health Care for the Homeless network in the South, West and East of the United States. Along with online photo essays from her work, she hopes to publish her photos after her fellowship.

She also hopes to come away from the fellowship with a clearer picture of her own future.

"I want to become a doctor — I've wanted to for a long time — but I've had this fascination with journalism and visual storytelling that I felt I couldn't reconcile with that ultimate goal," she said. "I hope to use this fellowship year to see if a union of these two interests is feasible in my long-term future."