Students collaborate around issues of social justice in freshman seminar 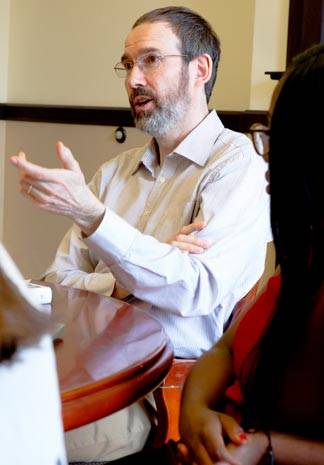 In the freshman seminar "Capitalism, Utopia and Social Justice," students collaborate as they examine complex issues in society. The seminar is taught by Marc Fleurbaey, the Robert E. Kuenne Professor in Economics and Humanistic Studies and a professor of public affairs and the University Center for Human Values.

Princeton's newest undergraduates are setting out on a path of inquiry and discovery this spring through the University's freshman seminar program.

A total of 281 freshmen are enrolled this semester in 26 seminars, each of which is held in one of the six residential colleges. The seminars are open to students from all of the residential colleges. Class discussions often continue in informal settings on and off campus, through meals, guest lectures, field trips and other activities.

Halfway around the table, it came time for freshman Ryan Ozminkowski to report on his research.

"The world is insanely complex," he said by way of introduction, before describing to his 13 Princeton classmates and professor how he was progressing with his study of intellectual property rights.

"My goal," he said, "is still to make some kind of ideal copyright law. I'm going to come into class with a draft and get feedback."

Tackling complex topics and exploring solutions as a group is a key feature of "Capitalism, Utopia and Social Justice," the Freshman Seminar in Human Values being offered this semester. It is taught by Marc Fleurbaey, the Robert E. Kuenne Professor in Economics and Humanistic Studies and a professor of public affairs and the University Center for Human Values.

"The seminar connects well with my own interests in welfare economics and political philosophy," said Fleurbaey, who joined the Princeton faculty in 2011 and has taught the seminar several times. Fleurbaey, who previously held various academic positions in economics in his native France, is the author of "Fairness, Responsibility and Welfare," among other books.

On a recent spring afternoon in Blair Hall, the seminar kicked off with a slide presentation by four students on the book, "The Great Escape: Health, Wealth and the Origins of Inequality," by Angus Deaton, the Dwight D. Eisenhower Professor of International Affairs and a professor of economics at Princeton, who was awarded the 2015 Nobel Prize in economics.

The presenters summarized the book's main themes, delving into arguments around life expectancy, health, poverty, inequality, happiness and aid. The range of ideas and the following discussion, which centered around how aid can harm as well as help, set up a strong foundation for student reports that crisscrossed significant societal issues.

The students had five minutes each to share their latest research on the topics they had chosen. Some of those subjects and students' remarks are below:

• Expanding internet connection in developing countries: "I'm following the news; so much is happening." — Casey Chow

• The role of government in education: "How do we compensate teachers fairly and attract college graduates?" — Hundley Poulson

• U.S drug pricing and development: "A lot of money is spent doing research that others have done; we need to make the development of drugs cheaper." — Benjamin Jacobson

• The question of democracy in general: "The democracy paradox — if it's good to expand suffrage, but if it brings in less informed voters, then is expanding it good?" — Jacqueline Berardo

• Environmental policy and human interest: "Climate change severely impacts the poor more than the rich — actually, I think you [Fleurbaey] have a paper on that." — Miriam Buscher

• Food and education about nutrition: "The cheapest way to provide health care is through preventive care." — Elizabeth Wright

• Terrorism and terrorists, including government responses and the role of education: "Current [military intervention] techniques are not working; they are creating the opposite effect." — Belinda Azamati 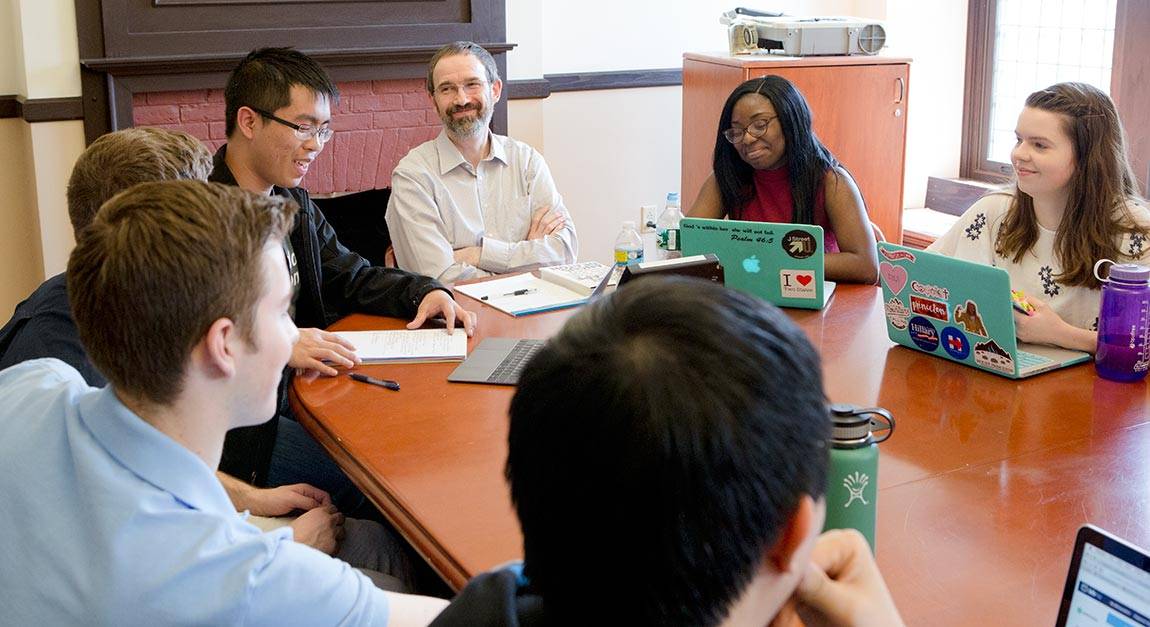 Students, who are exploring a range of topics, share the progress of their research with the group and invite feedback.

As the students took their turns, they spoke about what they had been researching, from government reports to newspaper and journal articles to films. Several thanked classmates for emailing relevant articles for their work, and some mentioned collaborating with or wanting to talk to others on shared issues. Each time, Fleurbaey invited students to respond.

In his presentation on religion and social justice, Caleb South spoke about how difficult it is to define religion, before even assessing its role in society. After the class, he explained that he lives in Provo, Utah, which has a predominantly Mormon population, and also has lived in Connecticut and Morocco.

"I'm from a highly religious part of the country, but I've also spent time living both in non-religious and in highly religious but non-Christian areas," South said. "As a result, I'm familiar with a wide variety of religious and non-religious attitudes, and I've seen firsthand the influence that religion can have on society. I've had many interesting conversations here at Princeton about what religion might look like in society in the distant future, and what it ought to look like. I realized that this project would be a unique opportunity to expand and formalize my interest in this topic, and to connect the academic literature to my personal experience."

For Miriam Buscher, who is interested in a career in environmental policy, learning to collaborate across research areas is an important part of the seminar.

Said Buscher: "I think our class's focus on connecting our various research topics is definitely a central component of the course. There are so many different factors that make up the social influences of issues, and, although it is difficult to consider all of them extensively, I believe efforts to do so should be in place. This perspective of social influences is why we collaborate so much and try to identify connections among our respective topics. We may not be able to consider every link between every topic imaginable, but that won't stop us from trying, and I really enjoy that attitude about our class — it's the type of attitude that often leads to real change in the world, and I think Professor Fleurbaey's requirement for collaboration among peers fosters a great environment for it." 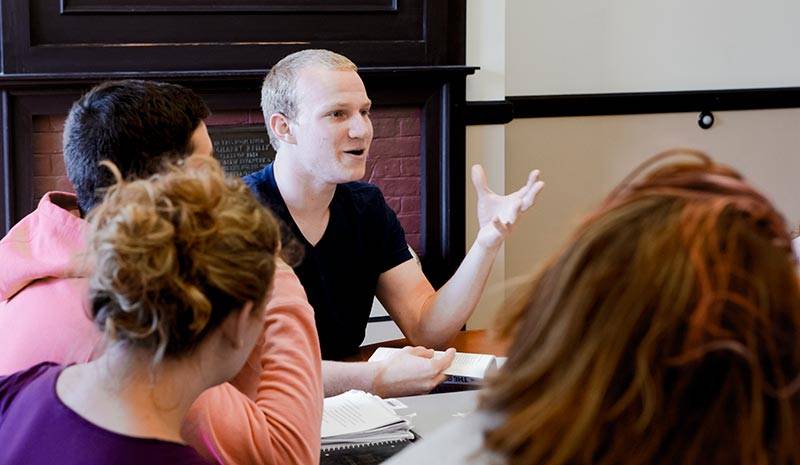 "The collaboration is everything," Ozminkowski said. "I think the biggest thing that I've gotten out of it is an understanding, or perhaps a misunderstanding, of how complex and impossible our world is to navigate and solve."

The ongoing nature of collaborative work on big social issues is something Fleurbaey knows well, and that too, he brings to the seminar. Fleurbaey is active with the International Panel on Social Progress (IPSP), a group of researchers across the globe who are writing a report covering a host of topics to do with social change. The idea for the IPSP grew out of Fleurbaey's involvement with the Intergovernmental Panel on Climate Change and was launched during the 2012 session of this seminar. IPSP is supported by the University Center for Human Values.

"This connection to the panel will enable the students to follow the works of a large author team and to make contributions of various forms," Fleurbaey said. "More than 20 Princeton undergraduates work as research assistants for this panel, and several are veterans of this seminar."

"Professor Fleurbaey has such a network of colleagues that he has given us the opportunity to reach out to," Ozminkowski said. "It's amazing to be a freshman knowing that I have access to the top scholars in any given field thanks to my professor."