Brian Herrera began developing one of his primary research methods — watching and re-watching TV shows and films — even before he hit third grade.

"I was a TV hound. I would watch the same episode of 'Gilligan's Island' over and over again," said Herrera, an assistant professor of theater in the Lewis Center for the Arts at Princeton University.

Being a latchkey child also played a role. Both his parents worked and didn't get home until late. Herrera grew up in the 1970s in a rural New Mexico town outside Albuquerque. Even with access to only two channels, NBC and PBS, he watched and re-watched everything from "The Brady Bunch" to "Sesame Street" and "The Muppet Show."

When his father's work took the family to an expatriate community in Saudi Arabia, Herrera would spend hours immersing himself in the neighborhood's ad hoc collection of VHS tapes of movies and TV shows.

Herrera said his curiosity about cultural stereotypes and references "became part of the gathering encyclopedia in my brain; I started being interested in filling in those gaps." Thus began a lifelong fascination with TV, film and theater. Herrera's work, both academic and creative, examines the history of gender, sexuality and race within and through U.S. popular performance. His recent scholarship focuses on Latinx intersections in this arena.

"Being an avid re-watcher serves me as a scholar and teacher, because when you see something again, you see different things," he said. There are movies, such as "West Side Story," Herrera has watched hundreds of times, "but every time I see it, I see a different movie."

Brian Herrera, an assistant professor of theater in the Lewis Center for the Arts at Princeton, is a self-described "cultural historian" whose work, both academic and creative, examines the history of gender, sexuality and race within and through U.S. popular performance. (Photos by Denise Applewhite, Office of Communications)

"Brian is the most important scholar today working at the intersection of American performance studies and Latino studies," said Wendy Laura Belcher, associate professor of comparative literature and African American studies. "His work urges us not to look only at how stereotypes victimize Latinos, which they surely do, but at how Latinos participate in constructing American popular culture and in determining a new future."

"I consider myself a cultural historian of U.S. popular performance and what it tells us about how that culture understood itself at that moment," Herrera said.

"Brian possesses tremendous vision about the possibilities of theater and performance studies, as well as Latino and American studies, at Princeton," said Stacy Wolf, professor of theater and acting chair of the Lewis Center for the Arts.

One 'Latin explosion' after another

The Nathan Committee took particular note of Herrera's analysis of the success and impact of the 1957 musical "West Side Story," which takes up a chapter in the book. Herrera examines every aspect of the groundbreaking musical — from the media controversy surrounding the depiction of Puerto Ricans to the decision to cast unknown Latino/a actors — weaving in issues of politics, economics and cultural identity, peppered with theater trivia. 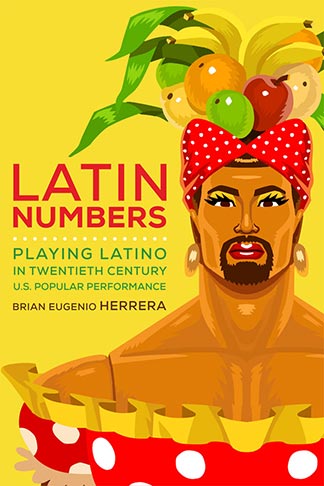 "The book is an important contribution to the field of Latino/a popular culture studies," said Wolf. "[Brian's] work intertwines history and analysis of performance through a Latino lens. The chapter on 'West Side Story' completely changed how people think about that musical. The book is now required reading in the field."

The book grew out of Herrera's dissertation. "I decided to write the book in the context of the summer of 1999, the summer that everyone was 'Livin' La Vida Loca' [the hit song by Latino star Ricky Martin, which won the Grammy for Song of the Year]," he said.

"The historian in me was frustrated by the lack of historical awareness that this 'newness' of Latinos in U.S. popular entertainment and performance was being celebrated as a new thing," Herrera said. "I had lived through three or four other 'Latin explosions' where the same claim had been made, where Latinos were suddenly about to be important. The book looks at why these moments of Latin explosion happened.

"My hope is that the book is a referent point for whenever we have these 'Latin' explosions, one of which is happening right now," he said. He noted three major television shows that launched between November 2015 and January 2016 helmed by major Latina stars: Eva Longoria in "Telenovela," (telenovelas are Latino soap operas), America Ferrera in "Superstore" and Jennifer Lopez in "Shades of Blue" — all of which followed on the heels of 2014's "Jane the Virgin," which parodies telenovelas and features a majority Latino cast and characters who speak only Spanish.

Herrera is working on a new book, "Casting: A History," which he said grew out of his research for "Latin Numbers." "I kept going to the library and looking for a history of casting — with its controversies around race and gender and equity — and I couldn't find one," he said. 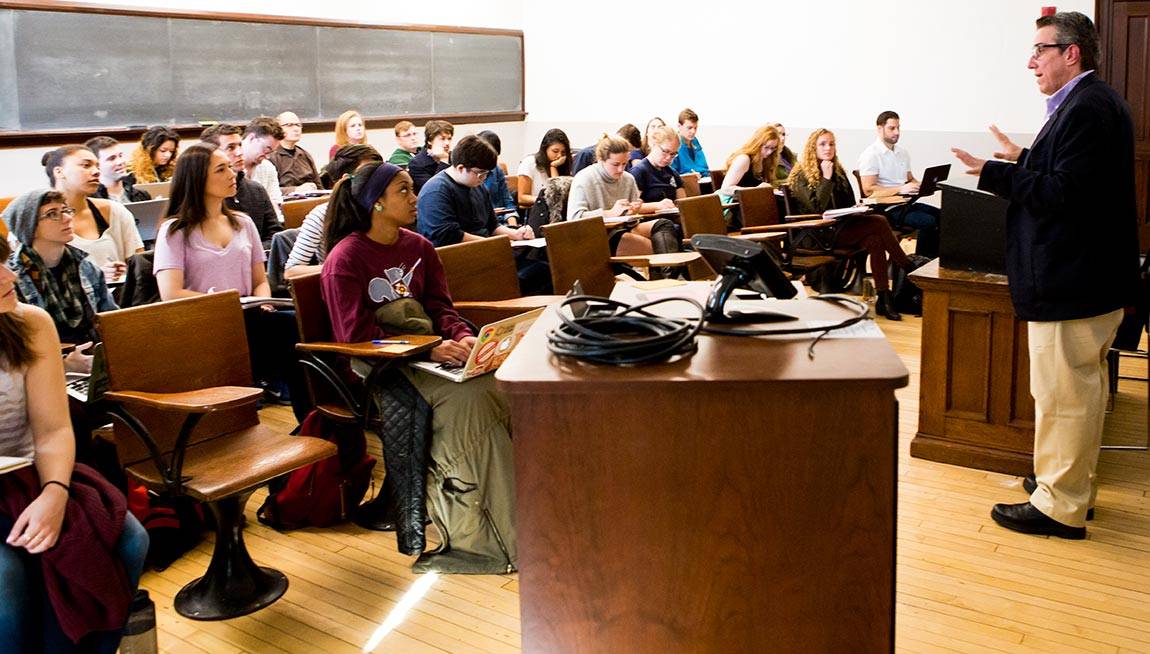 Herrera teaches courses including "Queer Boyhoods," "Autobiographical Storytelling" and "Playing Against Type," which are often cross-listed in theater, gender and sexuality studies, American studies, and Latino studies. Above, Herrera leads a discussion in his spring course "History of American Popular Entertainments." (Photo by Denise Applewhite, Office of Communications)

A theater-maker who nurtures 'creative intellect' in the classroom

The creative and the academic reside hand in hand in Herrera's work as a theater-maker, scholar and teacher.

His autobiographical show "I Was the Voice of Democracy" — about an essay he wrote as a teenager that won a national contest — premiered in 2010 in Albuquerque and has been seen in venues from New York to Beirut and Abu Dhabi. In 2013, he launched two new story work shows, "Boys Like That" and "Touch Tones."

"Professor Herrera's work sits at the intersection of many different fields and illuminates their commonalities," said Rosina Lozano, assistant professor of history.

The themes that inform his theatrical and scholarly endeavors are also reflected in the courses he teaches at Princeton. These include "Queer Boyhoods," "Autobiographical Storytelling" and "Playing Against Type." The courses often are cross-listed in theater, gender and sexuality studies, American studies and Latino studies.

"We don't have to talk about questions in terms of politics, then history, then literature; we talk about them all at the same time," Herrera said. "That's what we do as theater artists; it's also what we do as interdisciplinary scholars. That's one of the great luxuries and privileges I am allowed at Princeton."

Every class he teaches includes a creative component and a critical component. "I love tuning into what I call the creative intellect — how you ask an intellectual question and use art as a way to explore that and then as an artist ask how those questions land in a scholarly mode. Creative intellect is the suturing between artistic and academic practices," he said.

Freshman Justin Sansone took Herrera's "Playing Against Type" in fall 2015 and described the course as "an in-depth analysis of the current process of casting performance work … where representation of persons of color and LGBT actors is finally becoming part of the conversations which determine who tells stories in film, theater and television."

Sansone said: "I have never had an educator who uses creativity as a catalyst for negotiating ambiguity and discovering clarity so well. Professor Herrera combines intellectual discourse with very hands-on artistic projects, be it acting through scene work or experimenting with monologue, voice and movement. He encourages his students to be critical thinkers, but also creators and active, curious learners."

Another facet of Herrera's creative engagement with the scholarly process can be found in the "acadoodles" he draws at lectures he attends — a combination of key phrases and doodling, which he creates with colored markers in a standard composition book.

"They get at the heart of the speaker's message and capture their own words along with the essence of their argument/message," Lozano said. Watch the video below to see a time-lapse of one of Herrera's acadoodles and listen to his explanation.

One facet of Herrera's creative engagement with the scholarly process can be found in the "acadoodles" he draws at lectures he attends — a combination of key phrases and doodling, which he creates with colored markers in a standard composition book. In this video, filmed during a reading at Princeton by the playwright Cherríe Moraga, Herrera explains his process. (Video by Danielle Alio, Office of Communications)

An 'open' mentor and teacher

When Arlene Gamio decided to pursue an independent concentration in Latinx studies, the sophomore was unsure about what first step to take. After meeting Herrera at a Latinx and LGBTQA panel in fall 2015, Gamio asked for help in drafting a proposal. "He was very open to my ideas and agreed very early on to support my project," Gamio said.

Gamio is taking Herrera's course "Movements for Diversity in American Theater" and said going to class is "an invitation to an honest dialogue concerning the issues at hand. … While you are learning all these amazing new concepts, it is very enjoyable and excitable, which opens a more natural flow of discussion in the classroom." 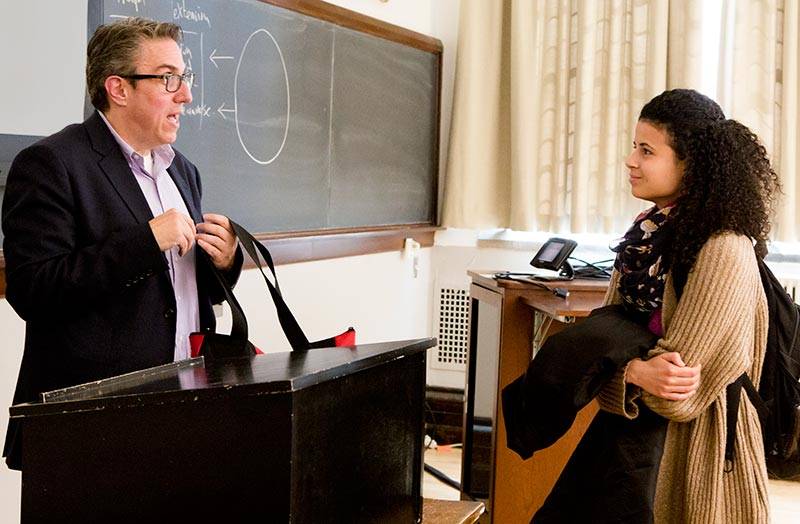 Every class Herrera teaches includes creative and critical components to tune into what he calls the "creative intellect." Above, Herrera chats with junior Briana Christophers after class. (Photo by Denise Applewhite, Office of Communications)

Herrera also serves as an academic adviser at Mathey College, one of Princeton's six residential colleges.

Sansone, one of Herrera's advisees, said: "He has been an essential role model and mentor for me. Additionally, if not more importantly, it was extremely comforting to have Professor Herrera, a proud gay man who devotes his life to theater, performance and literature, as someone to turn to for guidance when I first came to Princeton."

Sansone looks forward to taking more courses with Herrera. "He has taught me to have faith in myself and my work, and for that I am grateful beyond measure. I hope to continue to learn from Professor Herrera and see what wonderful scholarship and artwork he creates in the future."

Drawing the line: Anatomy of an ‘acadoodle’