Early in Jane Austen's "Pride and Prejudice," the main character, Elizabeth Bennet, takes a three-mile walk. It is an outing that reveals a lot about her character, and more than 200 years since the book's publication, is an event that captured the scholarly attention of a Princeton student.

Cameron Platt, an English major who is also earning a certificate in theater, used Elizabeth's walk as the seed for her senior thesis, part of her own academic journey that led to her being named the valedictorian of the Class of 2016. She will deliver an address at the University's Commencement ceremony on May 31.

Elizabeth traipses from the village of Longbourn to Netherfield Park, arriving a little disheveled and with muddied stockings at the manor where her sister Jane is being courted by Mr. Bingley. Platt uses this walk — a bit reckless for an unmarried woman of Elizabeth's station — and other examples of motion to explore new ways of understanding female selfhood and familial succession in English literature. Platt also focuses on works by William Shakespeare and Virginia Woolf.

Platt earned the Shapiro Prize for Academic Excellence in her sophomore year and was the co-winner of the George B. Wood Legacy Junior Prize for exceptional achievement during the junior year. She was elected to Phi Beta Kappa in fall 2015. She has received an English departmental prize annually since the spring of her first year, including the Class of 1870 Junior Prize and the Class of 1870 Old English Prize. She is a peer academic adviser in Wilson College, one of Princeton's six residential colleges, and a member of the undergraduate advisory committee in the English department.

In the fall, she will attend the University of Oxford as a Rhodes Scholar and is hoping to pursue a career in academia, the arts or a combination of the two. 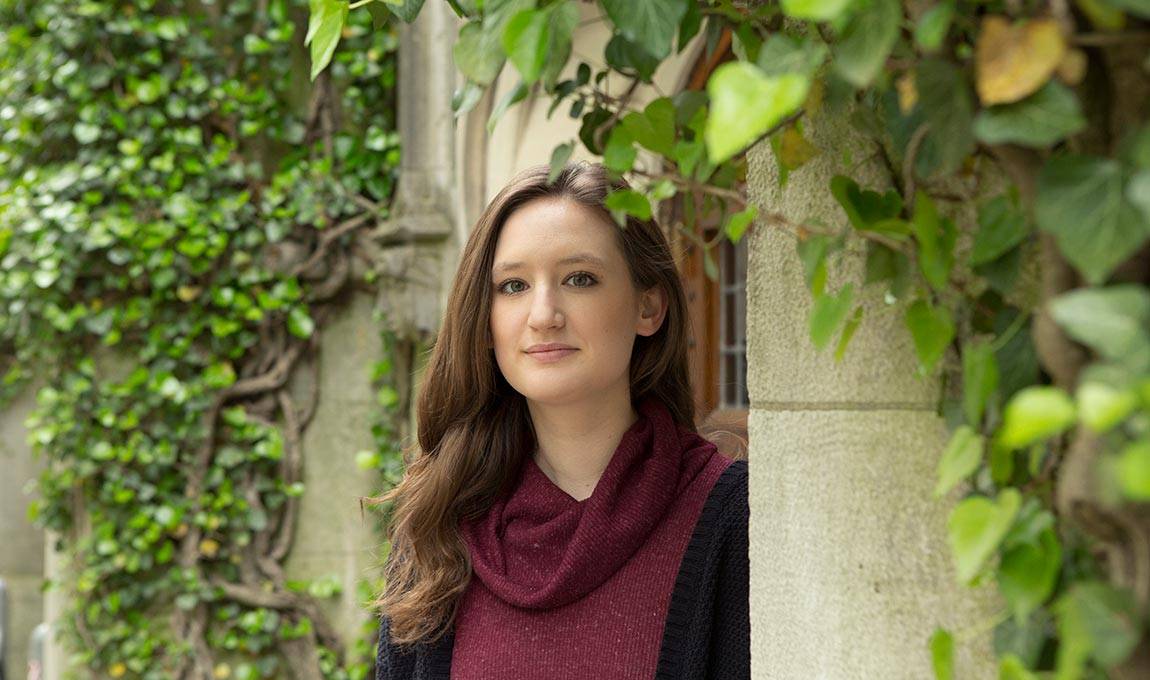 Cameron Platt, the valedictorian of Princeton University's Class of 2016, is pursuing a concentration in English and a certificate in theater. She will deliver the valedictory address at the University's Commencement ceremony Tuesday, May 31. After graduation, Platt will attend the University of Oxford as a Rhodes Scholar and is hoping to pursue a career in academia, the arts or a combination of the two. (Photo by Denise Applewhite, Office of Communications)

Platt's studies already have taken her to Oxford, where she participated in the Middlebury Bread Loaf School of English and did research for her senior thesis in the Bodleian Library during the summer of 2015 as part of a seminar taught by Sophie Gee, an associate professor of English at Princeton.

While looking through the catalogues of the local parish archives at the Bodleian, Platt discovered a set of sketchbooks made by a young woman around Elizabeth's age named Fanny Smith, who lived in Hertfordshire County in the early 19th century — the same time and place when and where "Pride and Prejudice" is set.

Platt noted how special it was to hold these sketchbooks and to observe how the choices Fanny made — drawing from particular angles and distances that reflected where she was allowed to be and not allowed to be in relation to the landscape — mirrored Platt's themes of women and motion.

Gee, who served as Platt's thesis adviser, said: "One of the lovely things about Cameron's thesis — and her critical writing generally — is her alertness to the complexities and contradictions in the arguments she makes. She gets that nuance paradoxically strengthens arguments, and she resists the urge to smooth things out too much."

Gee, who also taught Platt in "Introduction to English Literature" and "Inventing the English Novel," commended her scholarship on multiple levels. "The best way I can put it is that when I advise Cameron, I talk to her as I would to a colleague who'd shared their work with me. I learn from her — and what I learn is how to use careful, imaginative thinking to make connections between literature and the world. Cameron's writing always engages my attention, I always find myself responding to it wholeheartedly; I find her ideas as subtle, nuanced and refined as those of many colleagues in the field." 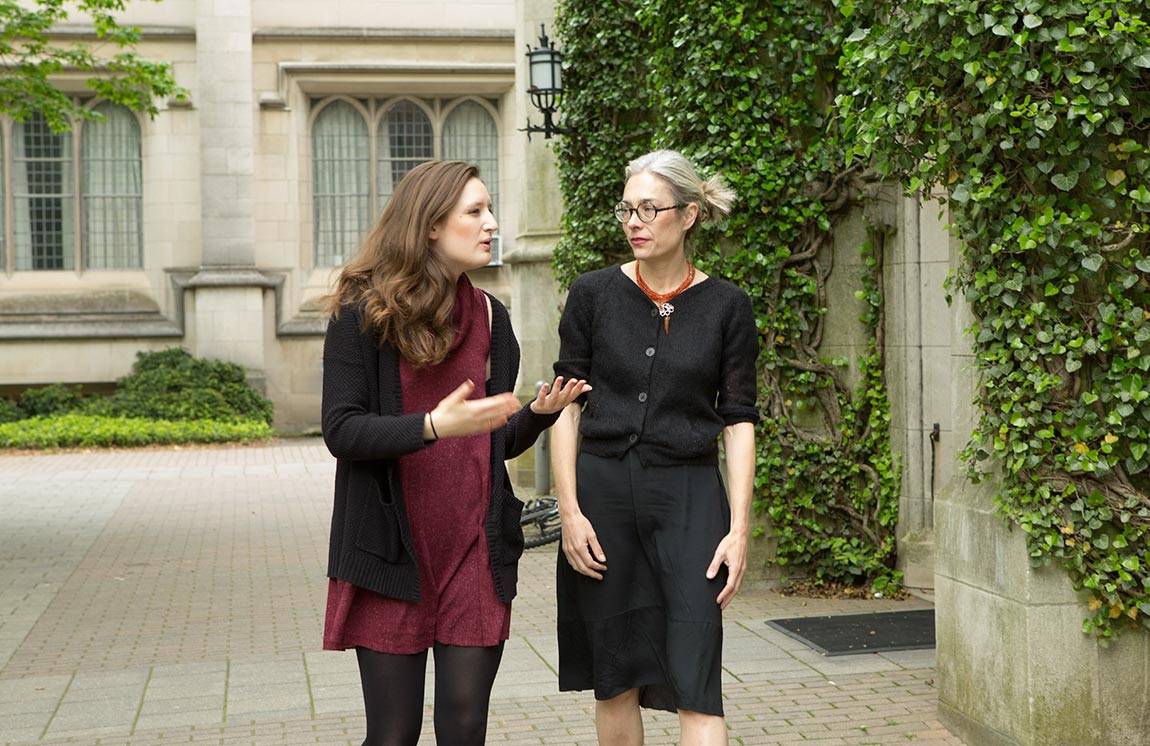 Platt takes a spring walk on campus with her senior thesis adviser, Sophie Gee, an associate professor of English. (Photo by Denise Applewhite, Office of Communications)

Curtain up: Onstage and behind the scenes

Platt's engagement with storytelling, both through literature and theater, began as a child in Santa Barbara, California. "I read all the time and spent a lot of time imagining my own world," she said. The rocky slope of her backyard, dotted with avocado trees, became a makeshift stage where she would act out adventure stories she made up, sometimes with friends and sometimes alone. After helping her older brother prepare for his audition for a sixth grade production of "Guys and Dolls," she was bitten by the theater bug, and by high school — she attended Laguna Blanca School — was active in community theater.

Before heading to Oxford, Platt will spend the summer working on "Cyrano: a love letter to a friendship," an original play inspired by "Cyrano de Bergerac," written by 2014 alumnus Sean Drohan and directed by 2015 alumnus Eamon Foley, to be presented at the Hollywood and New York Fringe festivals.

At Princeton, as an actor, director and in other production roles, Platt has worked on more than 20 theatrical productions — with the student-run Princeton Shakespeare Company, Theatre Intime, Grind Arts Company and Princeton University Players. At the Lewis Center for the Arts, she has also performed in three productions, including this spring, when she played the role of stage diva Irina Arkadina in Anton Chekhov's "The Seagull" to meet the requirements of her theater certificate.

"The only trouble I ever had with Cameron was getting her to be a diva," said Mark Nelson, a professional actor and a lecturer in theater and the Lewis Center for the Arts, who directed the production. "There's not a drop of egotism or spite in her being, and that was a problem. She finally found her way in through intelligence and love, which guide Cameron in all her pursuits. She played Arkadina's courage: the determination of an aging female artist and a single mother in a time that discouraged both. And out of that sympathy, Cameron found her fight."

Nelson also commended Platt's work with the ensemble. "She is a natural leader, even though an entirely modest one, and she set the tone for the whole company with serious dedication and beautiful laughter," he said.

Platt, who has twice been recognized for Outstanding Work in the Program in Theater, said the collaboration inherent in the process of producing theater has shaped her outlook on the world. "You can't help being really aware in theater of how many different kinds of insights people can bring to a single story," Platt said. This awareness has opened her eyes to "finding ways to achieve unity and understanding within that difference," she said. 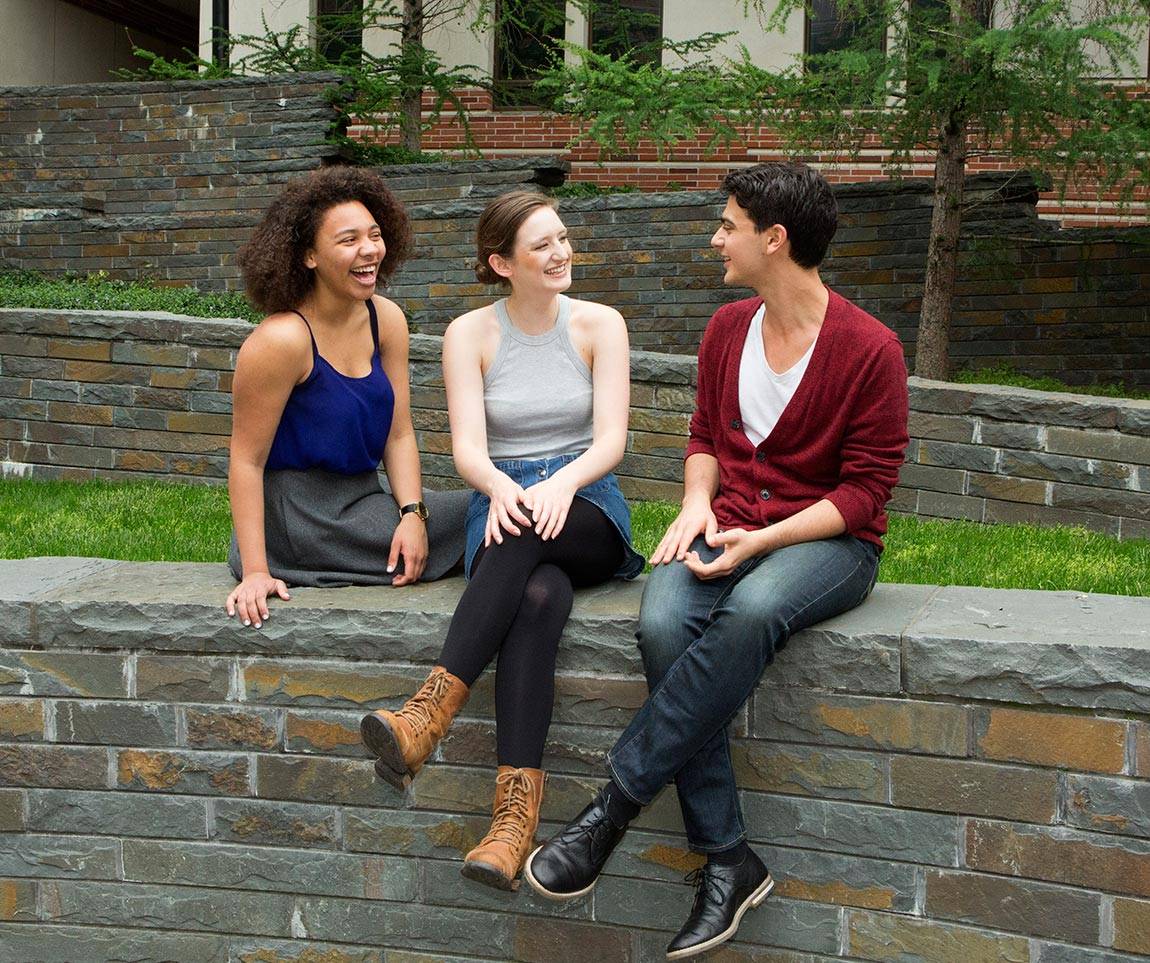 Platt, center, the former president of the student-run musical theater ensemble Princeton University Players (PUP), chats with newly elected PUP board members Abigail Jean-Baptiste, a sophomore, and junior Dylan Blau Edelstein. One of Platt's most meaningful experiences at Princeton was mentoring PUP board members as they chose their upcoming season to tie into conversations on campus about "identity and representation and inclusion," she said. (Photo by Denise Applewhite, Office of Communications)

Mentoring the next generation of Princeton theater students

Platt admitted she had "not the easiest transition to Princeton" during her first year. She was homesick and missed the community theater ensemble she had grown to love. She said if she were to write a letter to her freshman self now, she would tell her to "focus on finding ways to spend your time that are meaningful to you."

She said joining the executive board of Princeton University Players (PUP) in the winter of her freshman year, at the encouragement of an upperclassman, helped her find that meaningful pursuit at Princeton. Having served on PUP's board all four years, including as president, she has enjoyed the turning of tables — mentoring the underclassmen on the board. A critical arena for this mentorship, before handing over her title as president to a newly elected successor this spring, was in helping the younger board members choose the programming for the coming year.

"This year in particular those conversations about show selection have been tied to larger conversations on campus about identity and representation and inclusion," Platt said. "More clearly than before, I saw that the arts have an urgent responsibility to make voices audible — to create spaces that can welcome people with richly varied experiences and encourage dialogue among them."

As she looks back over her time at Princeton, Platt said she has sewn together her two passions — literature and theater — to shape her own artistic life.

"To live artistically, for me, is to look for ways to engage with lives that are different from my own. It's about respecting difference while recognizing the connections that persist within it. At its core, art asks us to live — or to try to live — in ever more empathetic and open-hearted relation to others," she said. 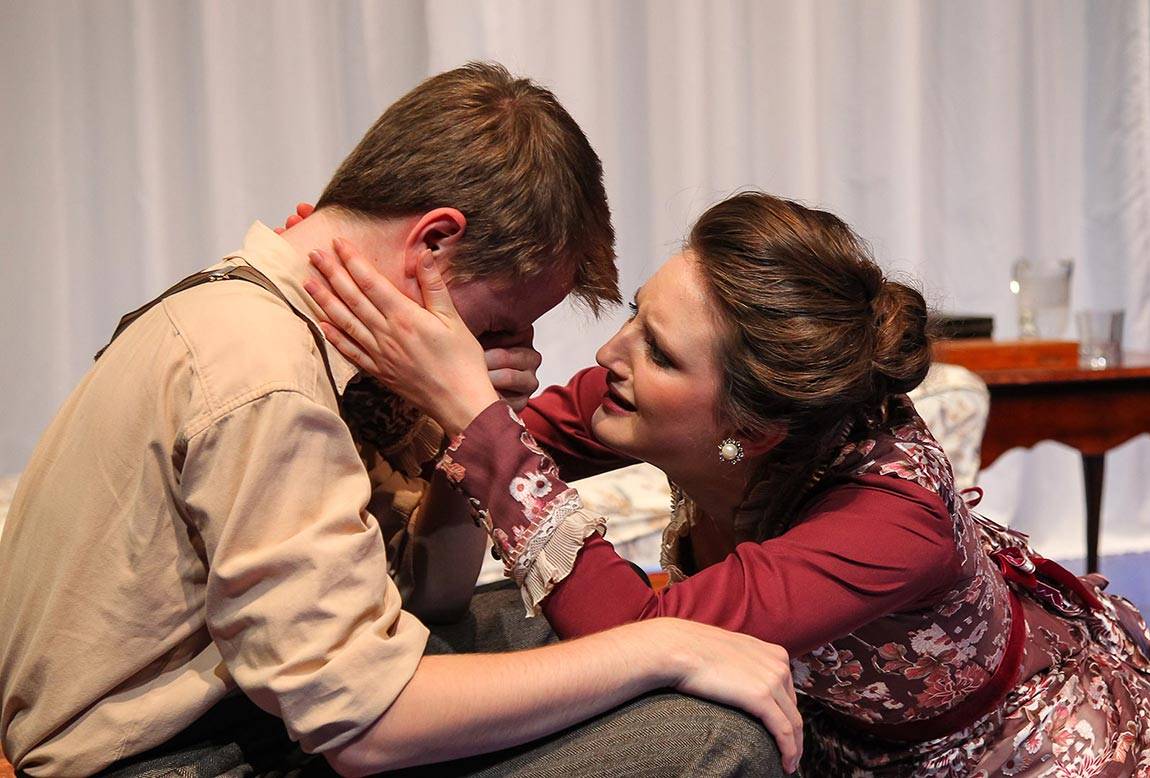 To satisfy the requirements of her certificate in theater, Platt portrayed the role of Irina Arkadina in a production of Anton Chekhov's "The Seagull" this spring. Above, Platt performs in a scene with junior Charlie Baker in the role of Konstantin Treplev, her son. (Photo by Larry Levanti for the Lewis Center for the Arts)