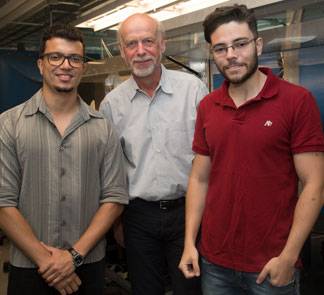 Alexander Smits (center), the Eugene Higgins Professor of Mechanical and Aerospace Engineering, hosted undergraduates from Brazil in his lab this summer as part of the University's pilot International Student Internship Program (ISIP). Davi Andrade (left) and Filipe Cunha (right) were among 14 international undergraduates who interned with Princeton faculty in different departments.

University of Delhi undergraduate Unnati Akhouri loves physics. When she is not studying the mysteries of the particle world, she is drawing playful cartoons about the field (which she calls "phymics") featuring a superhero electron or photon in love.

So the opportunity to spend the summer working with faculty at Princeton University's Department of Physics was truly her dream come true.

"When I started researching summer internships in the United States I never thought I would end up at Princeton. Some of the top physicists have been here," said Akhouri, who recently returned to India for her final year at university.

Akhouri is one of 14 international undergraduates who spent this summer at Princeton as part of the International Student Internship Program (ISIP). The pilot program allows promising young scholars from institutions abroad to work with Princeton faculty and to experience the University's unique academic and research environment.

Students came from Brazil, China, India and Slovenia, and were mentored by professors in computer science, ecology and evolutionary biology, engineering, molecular biology and physics. When not in the lab or library, they learned about each other and life in the U.S. while watching July Fourth fireworks in New York City or eating cheesesteaks and pretzels in Philadelphia. 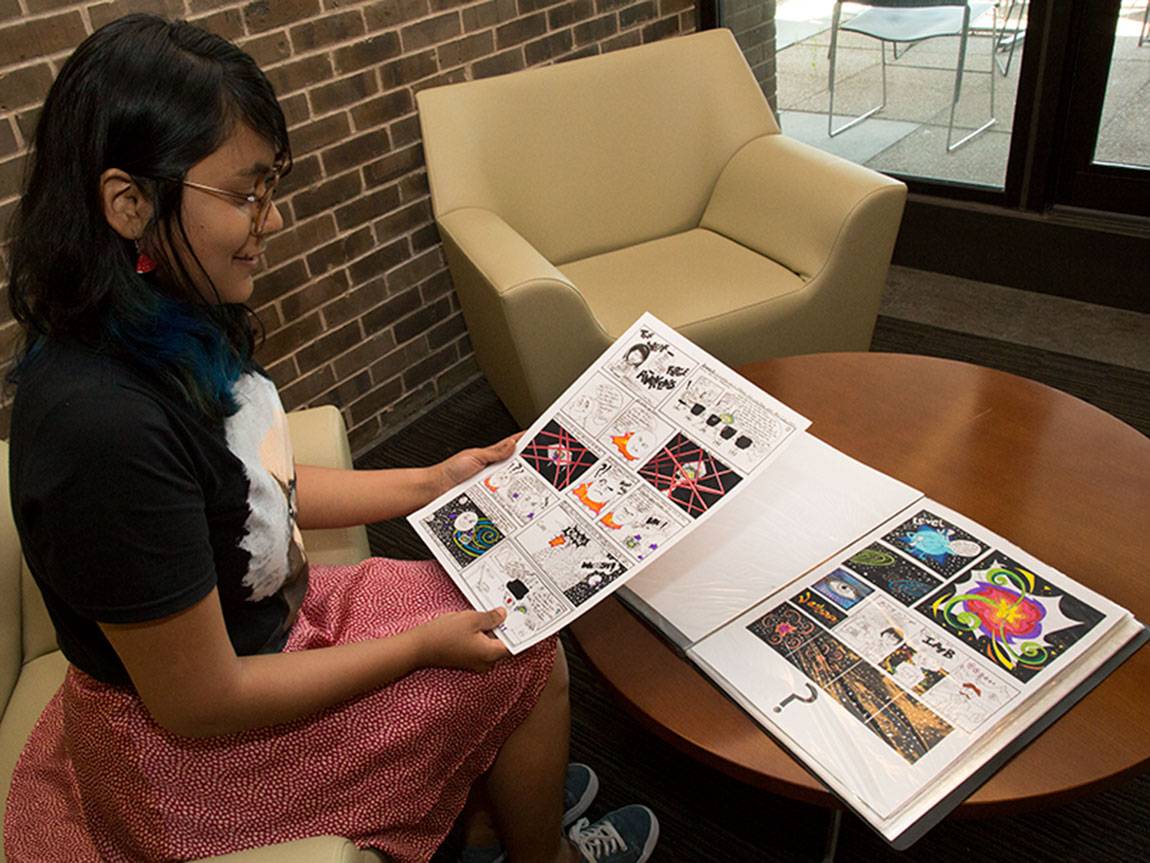 University of Delhi undergraduate Unnati Akhouri shows one of her "phymics," or physics comics, inspired by her summer internship at Princeton. She said the opportunity to work with physics professors at Princeton was a dream come true. Many of the international undergraduates participating in ISIP said their internships cemented their interests in pursuing graduate studies, perhaps at Princeton. (Photo by Danielle Alio, Office of Communications)

"This has been an amazing, hands-on experience," said Akhouri, who interned with Professor of Physics Kirk McDonald. "The professors here are willing to learn with you and take you through the journey and joy of learning. I will miss Princeton very much — it has truly changed the way I look at things."

This is exactly the type of outcome the University hoped for when it developed ISIP, said Vice Provost for International Affairs and Operations Anastasia Vrachnos.

"It's about transformation of perspective," Vrachnos said. "That is something that can only happen by having the experience of coming here, seeing firsthand the research environment that Princeton offers and interacting with our scholars. You can't read it in a textbook. You can't have someone tell it to you. It is that kind of experiential, international learning."

And the program is as much of a benefit to Princeton and the participating faculty as it is to the visiting students.

"Computer science is a truly international field, and many of our top graduate students come from abroad," said Department of Computer Science Chair Jennifer Rexford, the Gordon Y.S. Wu Professor in Engineering and professor of computer science. "Attracting top international undergraduate students to a summer internship is a wonderful way for us to energize our ongoing research collaborations, recruit great applicants to our graduate program and raise broader awareness of the exciting research here at Princeton."

ISIP students came from Brazil, China, India and Slovenia, and were mentored by professors in computer science, ecology and evolutionary biology, engineering, molecular biology and physics. Here, the interns take a break from their work to share stories of home during an international tea and talk on campus. (Photo by Denise Applewhite, Office of Communications)

ISIP was developed in partnership with faculty who were interested in hosting undergraduate interns from abroad, and the creation of the program establishes a formal University mechanism for them to do so. (The University already had a program for visiting graduate students to work with professors on short-term, non-degree projects.) The summer is an opportune time for internships when faculty and undergraduates are on break between academic years.

"I always like to have interns during the summer because it gives me a chance to try new things or make progress on existing work," said Alexander Smits, the Eugene Higgins Professor of Mechanical and Aerospace Engineering. 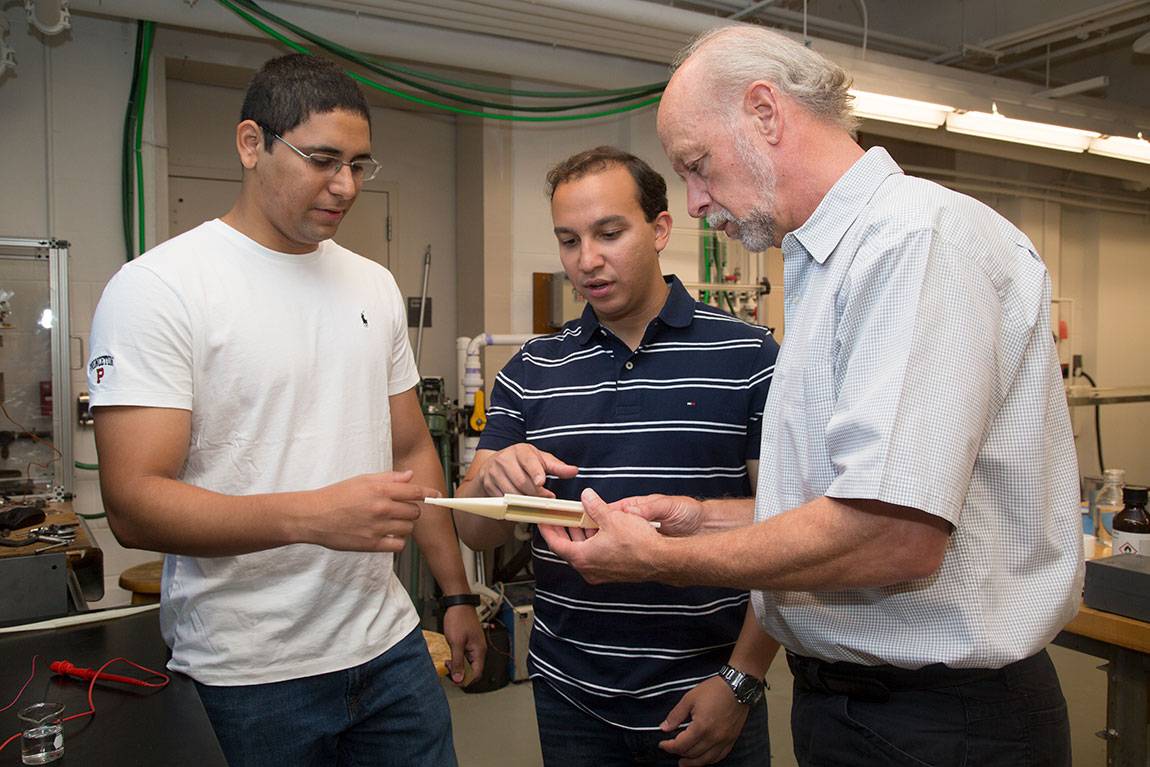 Smits often hosts Princeton students as summer interns, and said he was pleased to add four engineering students from Brazil to this year's group. "It was wonderful to meet them, and I hope this experience will help their research and career in the future," he said.

Smits paired the international interns to work on projects reflecting his eclectic research interests. One team developed a prototype for a medical device that can measure red blood cell damage in real time, while the other team built a wind tunnel model to examine the flow of heat in urban environments.

"Professor Smits is always very present. When something is not right, he is always smiling and motivating us to figure it out," said Filipe Cunha of the Universidade Federal de São João del-Rei.

"Everyone [at Princeton] is so capable in what they do," said Andrade, who attends Universidade Federal de São Paulo. "The opportunity to come here is not something I ever thought would have been possible. I am really proud." 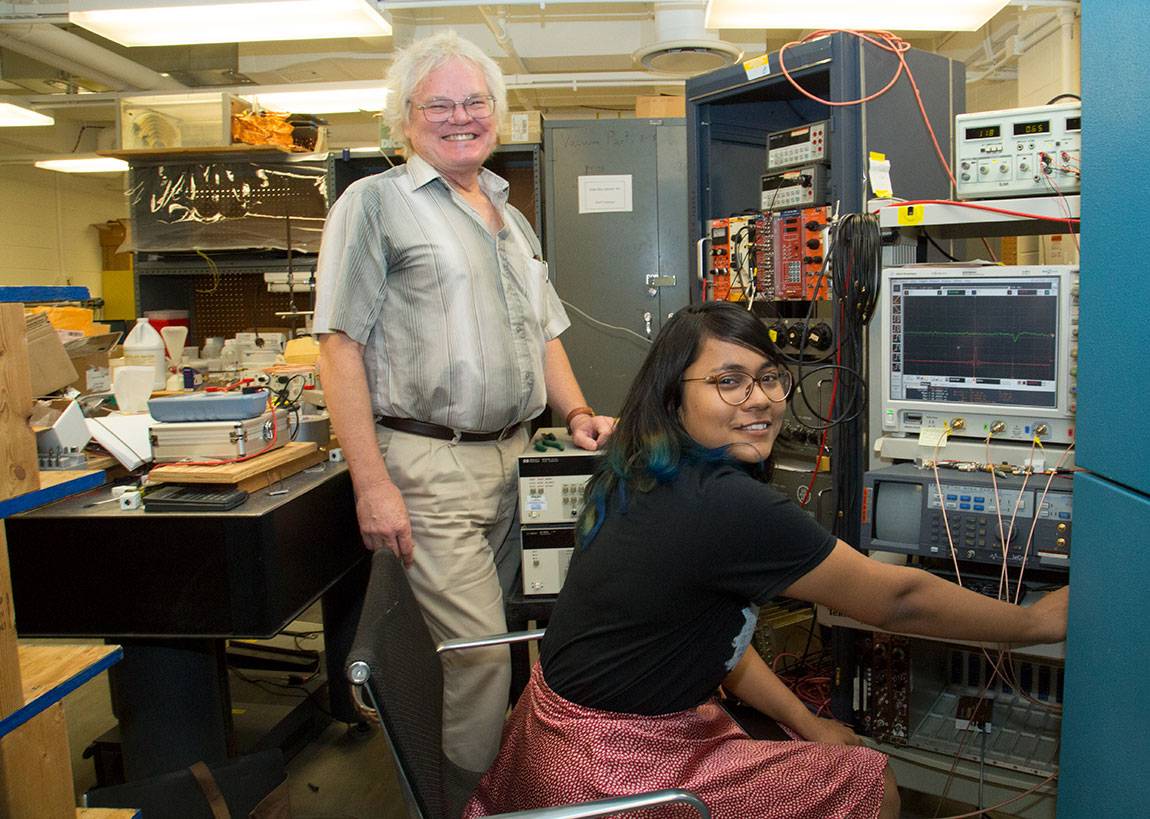 Akhouri spent the summer working with Professor of Physics Kirk McDonald (left). McDonald said he enjoyed mentoring an enthusiastic young scientist from abroad and hoped Akhouri gained an appreciation of where the frontiers are in physics. (Photo by Danielle Alio, Office of Communications)

Students from Zhejiang University in China expressed similar feelings about their respective internships in the Department of Molecular Biology.

"I really thank ISIP for giving me the precious opportunity to participate in this amazing research program," said Qianyun Zhang. She worked in the lab of Coleen Murphy, professor of molecular biology and the Lewis-Sigler Institute for Integrative Genomics, on research related to the molecular mechanisms of aging.

"I appreciate every person I worked with. When I had some problem or challenge, they were all willing to help me," said Junkai Wang, who studied cancer metastasis in lab of Yibin Kang, the Warner-Lambert/Parke-Davis Professor of Molecular Biology. "I also loved being here because there are so many trees and fresh air in Princeton. It seems like a forest and not a college campus."

During Caio Burgardt's internship with Professor of Computer Science Nick Feamster, the two started an information technology security blog and established a connection that Burgardt hopes will continue. Burgardt said he plans to help Feamster with research even after he returns to the Universidade Federal de Pernambuco in Brazil.

Many of the international undergraduates said the summer cemented their interests in pursuing further studies at graduate school.

"It is so important for these students to get a glimpse of what their future path can look like," Vrachnos said. "And it's a bonus for us if this deepens their interest in Princeton and if they go back home and tell their friends about their experience and the opportunities here." 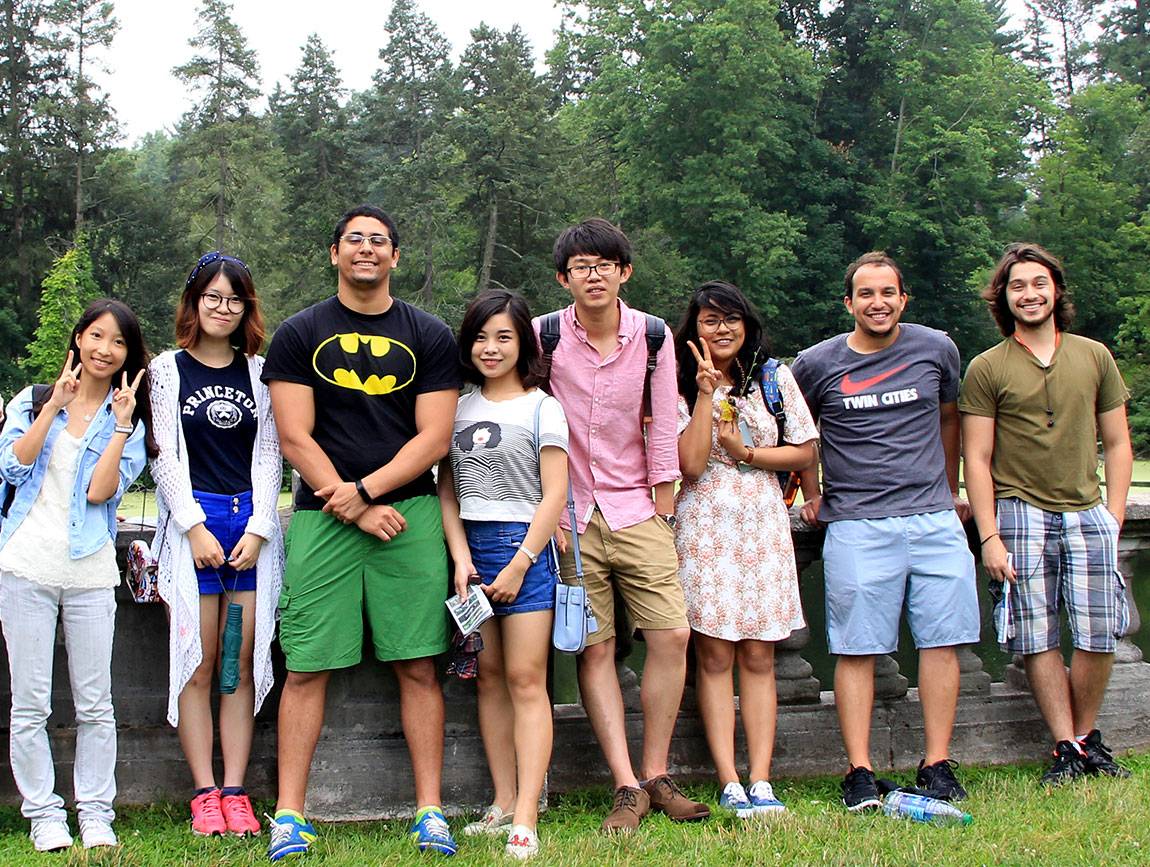 The visiting students said the bonus of ISIP was meeting each other. During their free time, the group attended concerts on campus, visited New York City and Philadelphia, and went on day trips such as this excursion to Duke Farms in Hillsborough, New Jersey. (Photo courtesy of ISIP)

On top of everything they learned at Princeton, the visiting students said the bonus of ISIP was meeting each other. At a closing dinner, students called the group a family and made plans to stay in touch.

Claire Hu, international affairs and operations manager, said it was wonderful to see everyone become fast friends. Hu helped organize the program and ensured the interns had the opportunity to experience Princeton and the surrounding community. During free time, the group attended concerts on campus, gathered for meals at local restaurants and went on day trips hiking and sightseeing.

At a tea and talk organized by the Davis International Center, students brought something that represented home to them — the Brazilian flag, a Slovenian poem, a Chinese calendar — and shared stories of life where they are from.

"This summer, I learned how to say my name and a few phrases in Chinese. I tried Brazilian food for the first time and absolutely fell in love with it," Akhouri said. "I love making friends from different cultures and countries. It has really broadened my horizons."

Looking back on the program's pilot, Vrachnos called it "a very successful beginning." Her office will now start to work with more academic departments to offer the opportunity to participate in ISIP next summer.

For Akhouri's mentor, McDonald, the experience was a worthwhile investment.

"I hope Unnati has come to some appreciation of where the frontiers are in physics. We need a generation of young people like her to get involved," McDonald said. "She was actually my first summer intern. I would definitely host another if the person is as enthusiastic and interested in learning as she is."