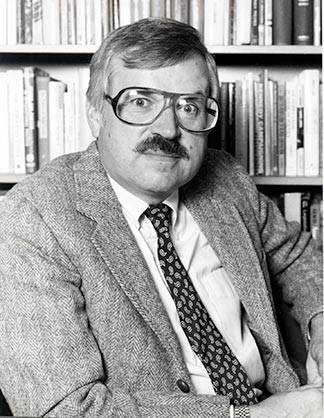 Princeton University political scientist Michael Danielson, who helped modernize the study of local government in the United States and abroad, died Sept. 22 in Princeton, New Jersey. He was 82 years old.

Danielson, the B.C. Forbes Professor of Public Affairs, Emeritus, and professor of politics and public affairs, emeritus, joined the Princeton faculty in 1962 and transferred to emeritus status in 2005. Born in New York City, Danielson received his bachelor's and master's degrees from Rutgers University and his Ph.D. from Princeton. From 1956 to 1959, he served as an intelligence officer in the U.S. Air Force.

Danielson's scholarship focused on urban policy and planning, with a particular interest in the politics of economic development. He also served the University as chair of the Department of Politics and associate dean of the Woodrow Wilson School of Public and International Affairs, among many other posts.

"He was a very fine scholar of urban government and American institutions," said Ezra Suleiman, the IBM Professor in International Studies and professor of politics. "He was an excellent chair of the Department of Politics at a time when the department was beginning to expand and so was responsible for setting a new direction for the department. In that regard, he was responsible for many fine hires. He was also known for his decency and for being a warm and concerned colleague."

Cecilia Rouse, dean of the Wilson School, the Lawrence and Shirley Katzman and Lewis and Anna Ernst Professor in the Economics of Education, and professor of economics and public affairs, sent condolences on behalf of the school to Danielson's family and loved ones.

"While at Princeton, Professor Danielson was devoted to University service, which is evident in the roles he held," Rouse said. "For example, he served as associate dean and faculty chair of the undergraduate program, two positions that are central to the academic excellence of the Wilson School."

Danielson's best-known book, "The Politics of Exclusion" (1976), set the stage for analysis of the growing distinctions between cities and suburbs, said Paul Lewis, who earned his Ph.D. from Princeton in 1994 and is now associate professor in the School of Politics and Global Studies at Arizona State University.

"'The Politics of Exclusion' was a thorough examination of the problem of the 'exclusionary zoning' of suburbia, through which many suburbs were able to remain exclusive upper- and middle-income enclaves in an era when the urban poor, particularly racial minorities, were seeking residential opportunities outside of segregated inner-city areas," Lewis said.

In all, Danielson wrote 11 books, including "Home Team: Professional Sports and the American Metropolis" and "Profit and Politics in Paradise: The Development of Hilton Head Island." He also wrote about growth in modern Turkey, regional development in New York and urban transportation.

"Home Team," a critical examination of the relationship between cities and pro sports teams, helped launch a popular course Danielson taught in the latter part of his Princeton career on the political economy of sports.

Danielson, whose interest in sports went beyond his scholarship, brought famed sports announcer Howard Cosell to campus in 1992 to lecture on "Public Policy and Sports in American Life." Former colleague Henry Bienen, later president of Northwestern University, recalled sharing many trips with Danielson to Princeton basketball games. With Lewis, Danielson shared a love for the long-suffering New York Mets.

Danielson was in high demand as an adviser for undergraduates' senior theses, Lewis said.

"For years, Mike had a highly coveted corner office on the top floor of Robertson Hall, where students could sit on a comfortable sofa and take in a scenic vista of the campus while getting detailed advice on their papers or career options — and maybe even borrowing a book from the extensive collection in Mike's office," Lewis said.

Memorial donations may be made to HomeFront or the D&R Greenway Land Trust.

A memorial service was held earlier this month.