What could be a better welcome to America than carving pumpkins? That's what Matt Weiner, Princeton University's associate dean of religious life, and Patrick Barry, director of refugee and immigration services for Catholic Charities in Camden, New Jersey, were thinking when they brought 25 refugee youths to carve pumpkins with Princeton students one sunny Saturday in October. The refugees were mainly from Syria and Myanmar, and the Princeton students were from the Class of 2019.

The Office of Religious Life (ORL) had been hoping to engage with refugees resettled in New Jersey, in connection with its interfaith conference on faith-based approaches to forced migration and the refugee crisis, scheduled for March 2-4, 2017. In early October, ORL also convened more than 50 faculty, staff and students engaged in refugee and immigration issues on campus. The meal at that event was catered by Global Grace, a refugee-staffed café run out of the Reformed Church of Highland Park. 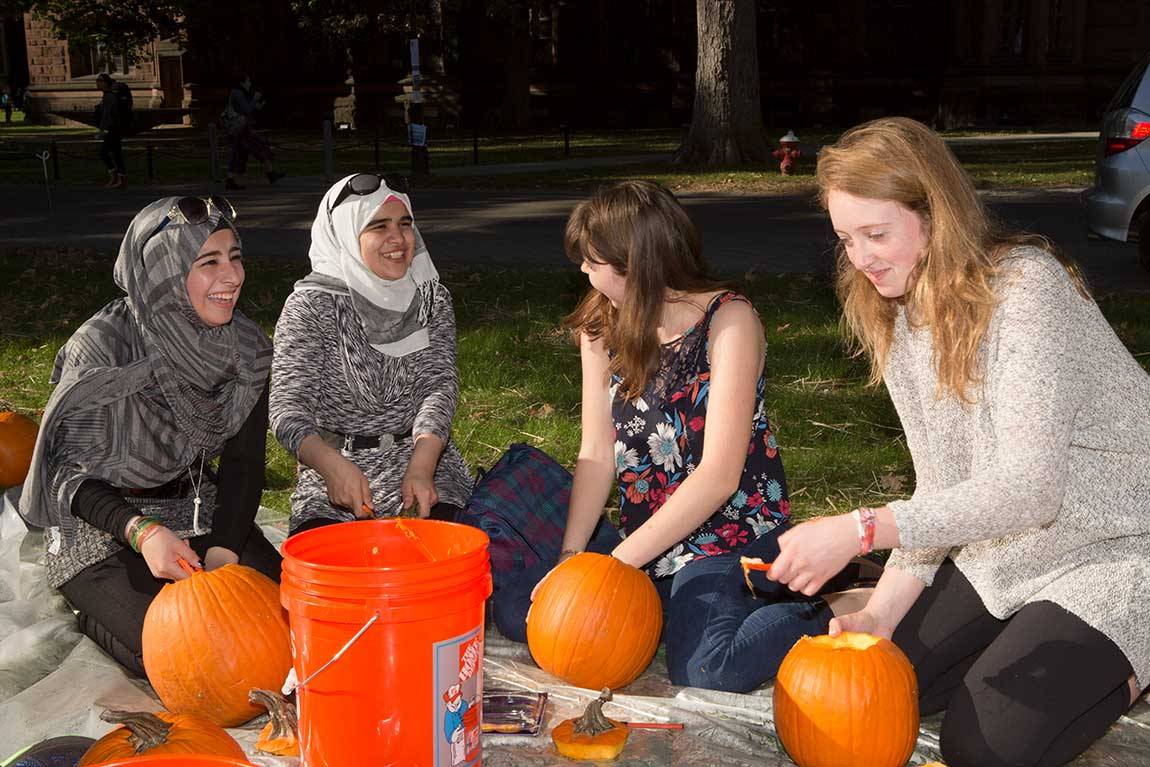 Princeton students and 25 refugee youths now living in New Jersey recently spent a sunny afternoon on campus carving pumpkins before Halloween. The event was co-organized by Princeton's Office of Religious Life and Catholic Charities in Camden. From left to right: Syrian refugees Rahaf and Reem get to know Princeton sophomores Stephanie Ward and Lilly Chadwick as they carve pumpkins on the lawn in front of Murray Dodge Hall. (Photos by Denise Applewhite, Office of Communications)

In this spirit of the growing momentum of refugee work on campus, Weiner wanted to connect Princeton students who participated in the global seminar "Exploring the Global Ghetto" with refugees in one-on-one work. The students spent six weeks last summer in Italy studying with Mitchell Duneier, Princeton's Maurice P. During Professor of Sociology, as part of the Princeton Institute for International and Regional Studies (PIIRS) Global Seminars program.

Weiner contacted Barry at Catholic Charities and they began exploring mentorship opportunities. They decided that most of the Princeton students who participated in the "Global Ghetto" seminar would have the opportunity to tutor 13 teenagers from Myanmar who now live in New Jersey.

The tutoring program will involve Princeton students connecting via Skype with the refugee students living in the Camden area. The students will work together remotely throughout the year and also hope to meet on occasion in person at Princeton.

Weiner and Barry wanted to bring the Princeton and refugee students together first before the tutoring program began, and planned an event shortly before Halloween.

"Then we thought, oh, let's do something that is fun and introduces them to a basic piece of American culture," Weiner said. "I've always loved carving pumpkins, and when I mentioned this to Catholic Charities they were really excited." 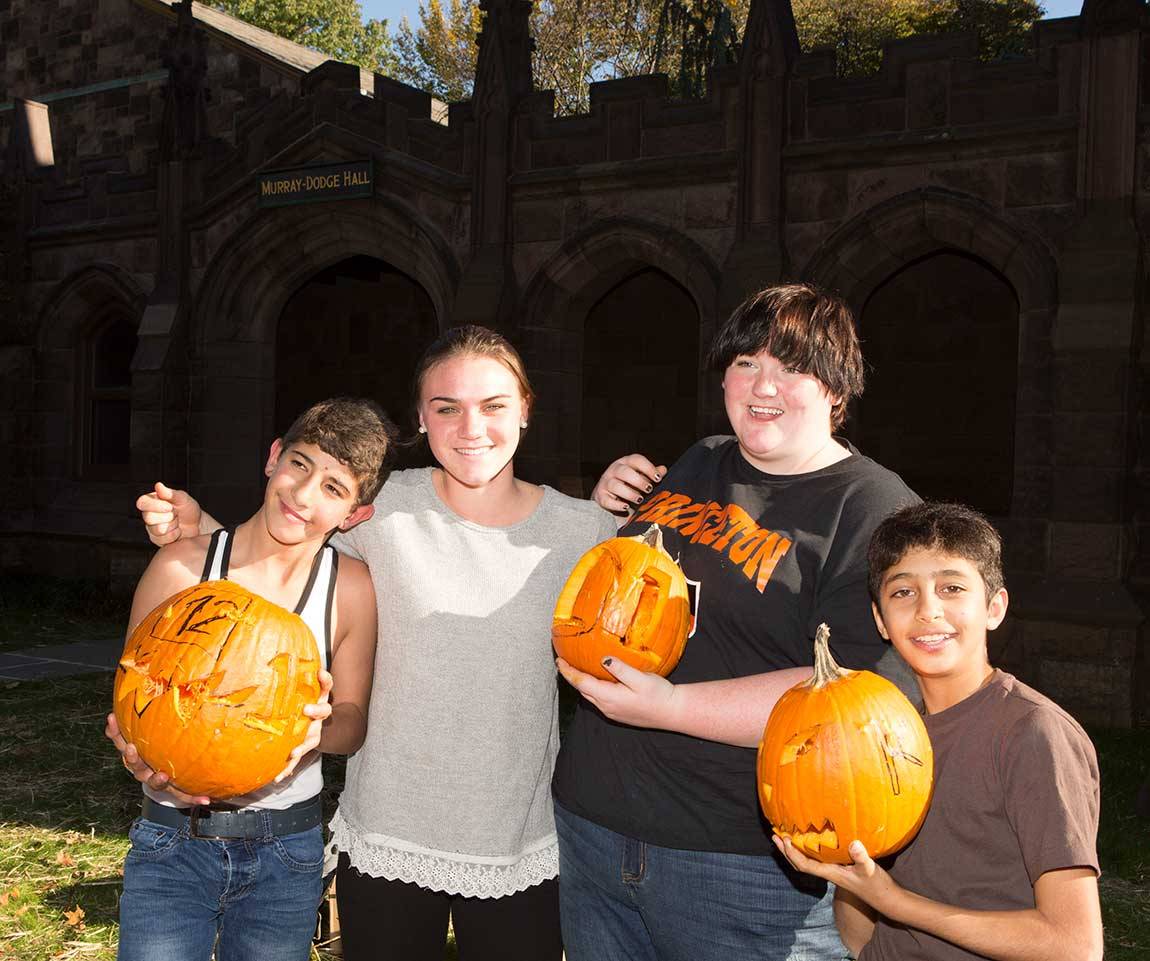 Princeton sophomores Carly Bonnet (center left) and Téa Wimer (center right) show off the pumpkins they carved with Abdulhafiz (far left) and Khaled (far right). Refugee students from Syria, Myanmar, Ethiopia and Iran were paired with Princeton students and staff members and their families to carve pumpkins. Some of the refugee youth from Myanmar also will participate in a year-long tutoring program with Princeton students.

Weiner then connected with the sophomore class government about co-sponsoring the pumpkin carving event. "It is important to show how close to home this issue is," said Class of 2019 president Chris Umanzor, adding that he believes that "class unity [for each undergraduate class year] comes through service."

One hundred pumpkins were set up outside Murray-Dodge Hall for the event Oct. 15. In addition to the students from Myanmar participating in the tutoring program, other refugee youths were invited to take part in the festive afternoon. Refugee students, from Syria, Myanmar, Ethiopia and Iran arrived in vans from Camden and were paired with students and staff members and their families to carve. Some of the refugees had lived in America for a year; others only arrived the week before.

"The language barrier made things a bit difficult — many of the students are still learning English — but we were certainly able to communicate enough to produce some really neat Jack-o'-lanterns," sophomore Julia Casazza said.

Later, Umanzor and Maya Wahrman, communications coordinator for ORL and program officer for ORL's upcoming conference, gave the students a tour of campus, with Arabic translation by Tarek Mousa from Catholic Charities. The refugee youths could be heard chanting "Go Tigers!" as they circled back to Murray-Dodge to see their lit Jack-o'-lanterns in twilight.

The meeting of Princeton students and the newly arrived refugees was meaningful on both sides. Aya and Mahram, 16- and 17-year-olds originally from Damascus, Syria, who had been living in Amman, Jordan, arrived in the United States 20 days before the carving. They told sophomore Chiara Ficarelli they were happier in the United States because "people don't like Syrians" in Amman. 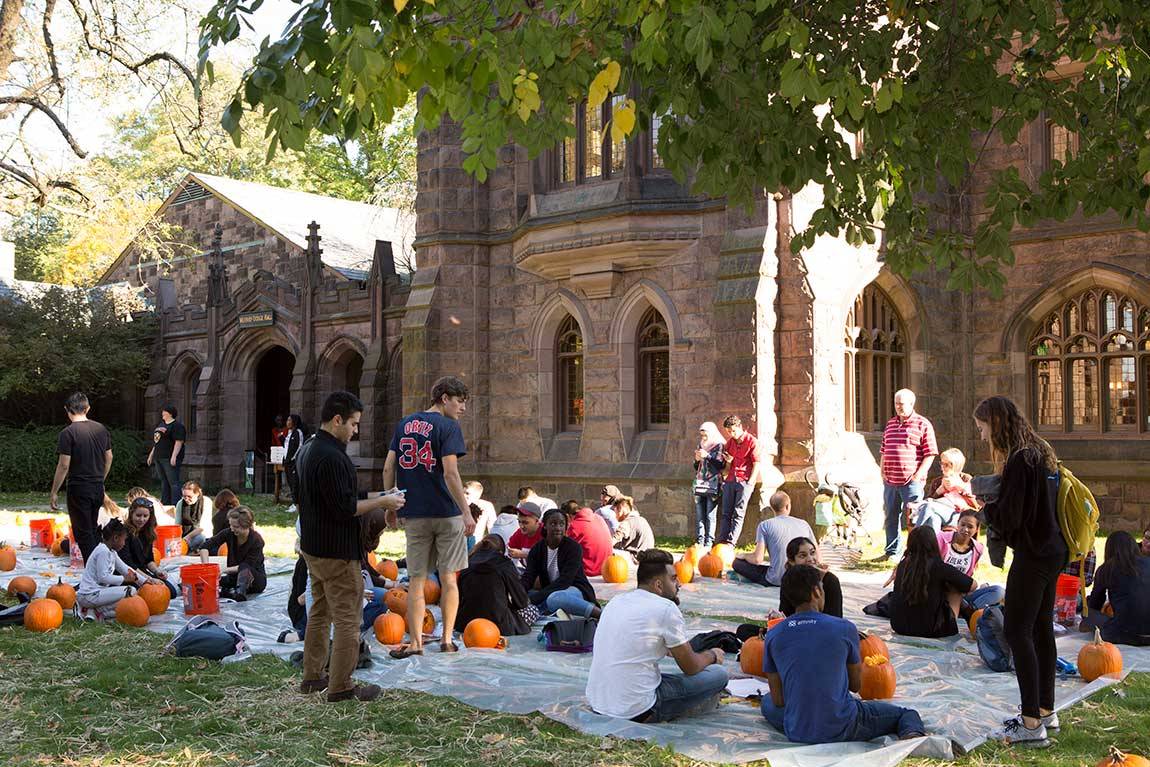 One hundred pumpkins were set up outside Murray-Dodge Hall for the event on Oct. 15. The Office of Religious Life organized the pumpkin carving as part of its ongoing programs related to refugee issues. Religious Life will host an interfaith conference on faith-based approaches to the refugee crisis on March 2-4, 2017.

Evan Schneider, program coordinator for the Pace Center for Civic Engagement, said that "with all the hyperbolic rhetoric about the danger that Muslims and refugees pose to Americans, it was a wonderful opportunity to show the refugee youths that many Americans warmly welcome them to our country."

Barry, from Catholic Charities, said it was amazing to see how the Princeton students welcomed youths who had fled their homes and spent many years waiting to receive refugee status and be resettled in the United States.

"These kids are an example of how they may become future American citizens and will contribute to civil society," he said.

Casazza added: "I think the benefits of this interaction are likely even greater for American students. The past year and a half or so, there have been a lot of misconceptions floating around regarding the refugee crisis. Interacting with someone whose life has been profoundly changed by this situation helps dispel any preconceived notions that American students might hold."

Schneider said the carving was a good reminder to "members of the Class of 2019 that though we strive to maintain the illusion of control over our lives, sometimes fate or war or sickness or something else can wrest away that control and send our lives spinning in unforeseen directions."

"When we think about the response to forced migration and refugees in this country, the faith-based aspect is a huge piece," Weiner said. "We want to model that here, as people of faith who care about the relationship between one's spiritual path and doing service. One way to do that is just to be welcoming."

At the end of the campus tour, Ali, a high school senior originally from Syria, told Wahrman: "Thanks so much. Maybe I'll see you here again — I'm thinking of applying here."

Chiara Ficarelli, Class of 2019, contributed reporting for this story.