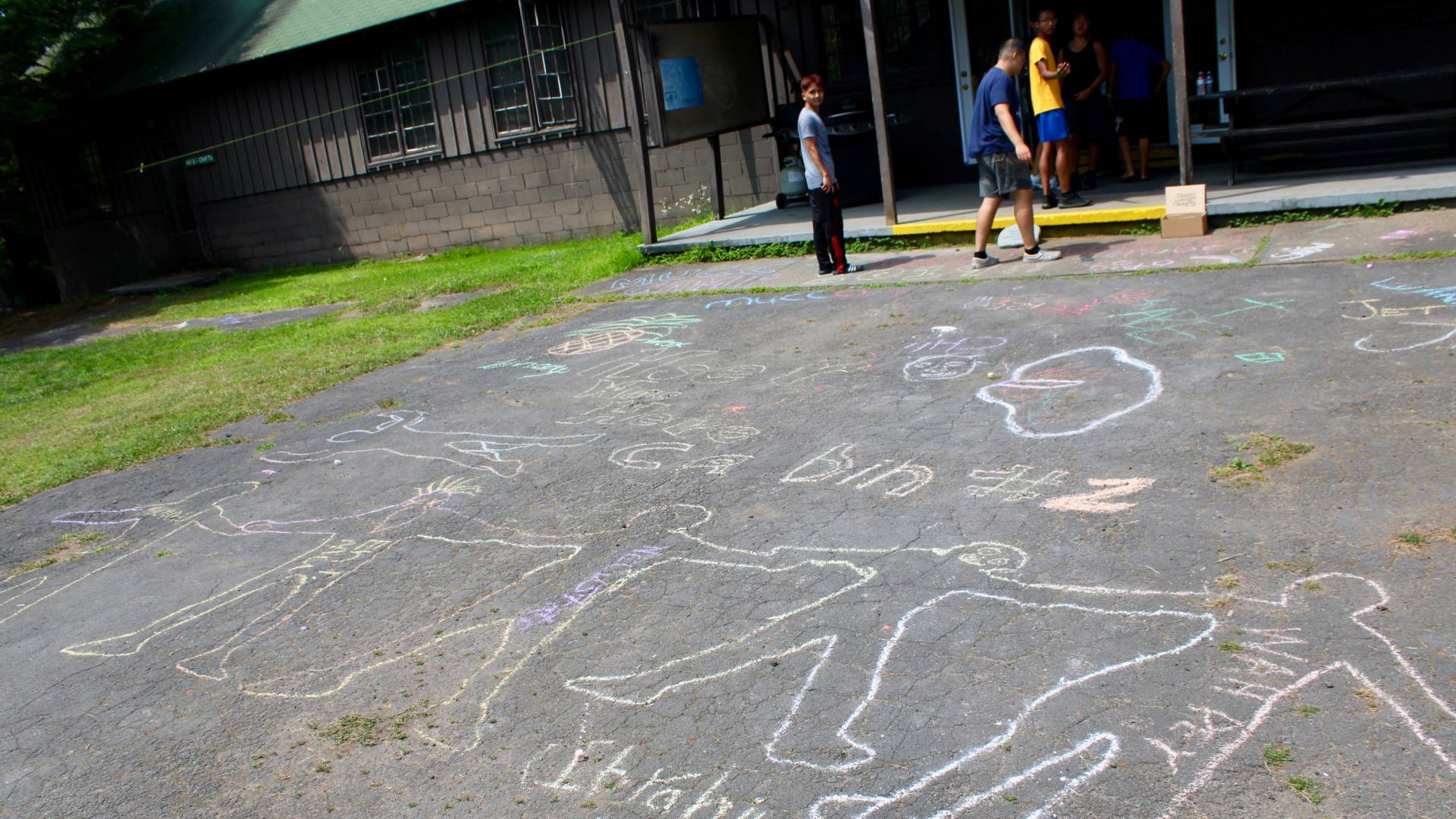 This summer, 14 Princeton students interned with a range of resettlement-related organizations and conducted interviews for an oral history project through the Office of Religious Life's Religion and Resettlement Project. Pictured: Campers use chalk to decorate the sidewalk at the summer camp that Midtown Utica Community Center (MUCC) runs at Camp Nazareth in Woodgate, New York, in the Adirondacks. Irene Hsu, Class of  2020, volunteered at the camp.

This summer, 14 Princeton students practiced the art of active listening. As interns involved in an oral history project designed to capture the experiences and personal narratives of resettled refugees across the U.S., they were immersed, as one student described, in “the landscape of immigration.”

As part of the Office of Religious Life’s (ORL) Forced Migration Internship Program, Gabriela Rivera, Class of 2020, interviewed resettled refugees in Boston. In Christ Church, Virginia, Simone Wallk, Class of 2021, spoke with refugees who entered the country with a Special Immigrant Visa (SIV), which grants legal status to those who worked for the U.S. military and were persecuted in their country of origin. Irene Hsu, Class of 2020, conducted interviews in Utica, New York, where foreign-born residents constitute nearly 20% of the population, including refugees from Bosnia, Myanmar and Vietnam, among other countries. Others volunteered in North Carolina, Georgia, New York state and elsewhere.

The internship program is one component of ORL’s Religion and Resettlement Project (RRP). Launched in fall 2018, RRP is a three-year national program that aims to create a better understanding of and response to the role that religion plays in the lives of refugees as they resettle in the United States. It is primarily funded by the Henry Luce Foundation and co-chaired by the United States Conference of Catholic Bishops (USCCB). Although the majority of refugees identify as religious, and faith-based organizations have resettled the majority of refugees historically and presently in the U.S., no systematic studies have yet addressed the rich interplay of faith and forced migration. 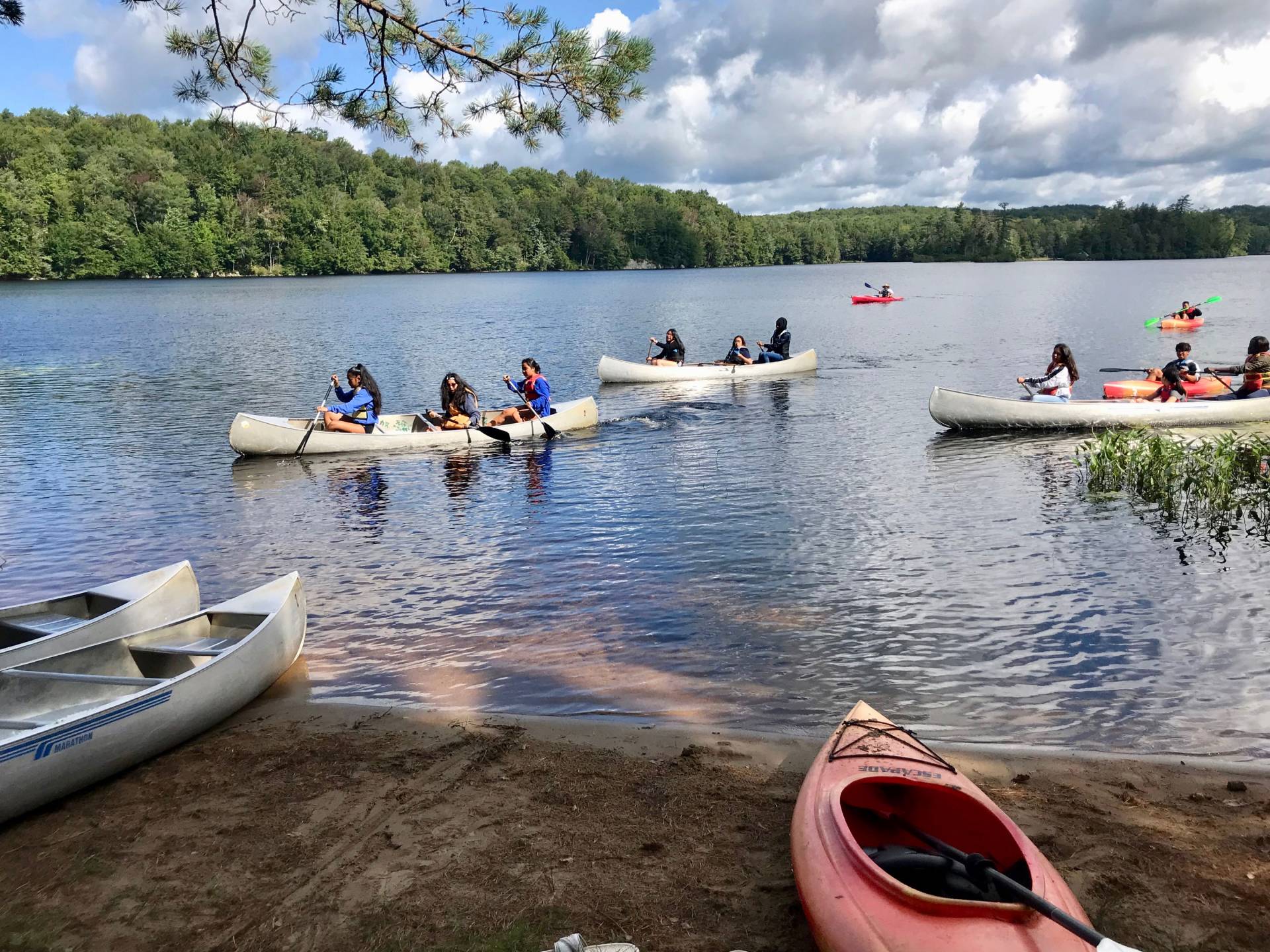 Campers race to win the canoe regatta at the MUCC summer camp.

The interns worked with a range of resettlement-related organizations — from day camps to social and legal services providers. They spent roughly 20% of their time interviewing refugees for RRP’s oral history project, a developing archive that considers how refugees’ religious and spiritual lives have been consequential in their resettlement and integration. The open access archive, housed at Princeton University Library’s Mudd Manuscript Library, is designed to preserve refugees’ stories to support civic engagement, dialogue, listening and chaplaincy within intercultural and interfaith communities across the country.

Matthew Weiner, associate dean of religious life, said the internship program fits into ORL’s overarching vision: “Traditionally an office of religious life may be understood as focusing on religious worship and individual chaplaincy, but Princeton’s ORL understands the religious life to include civic, intellectual and public life as well. This program helps students to foster their vocational and professional development, enhance their understanding of the relationship between academic work and service, and respond to the world around them while reflecting with peers and mentors.”

Before conducting interviews, students were trained in oral history methods. During the interviews, many said they made meaningful connections.

Rivera, who interned at Catholic Charities in Boston, interviewed a Somali woman in her 30s who resettled in the U.S. as an 18-year-old. Initially, Rivera, a Boston native, related to the woman’s description of landing in Boston: “She described to me a feeling that I have felt countless times — that of flying into Logan Airport and seeing the city from above, remembering that you are returning to a familiar place.” Rivera said the woman’s tone changed, however, when describing how “the hijab she wears marked her as a potential threat.” 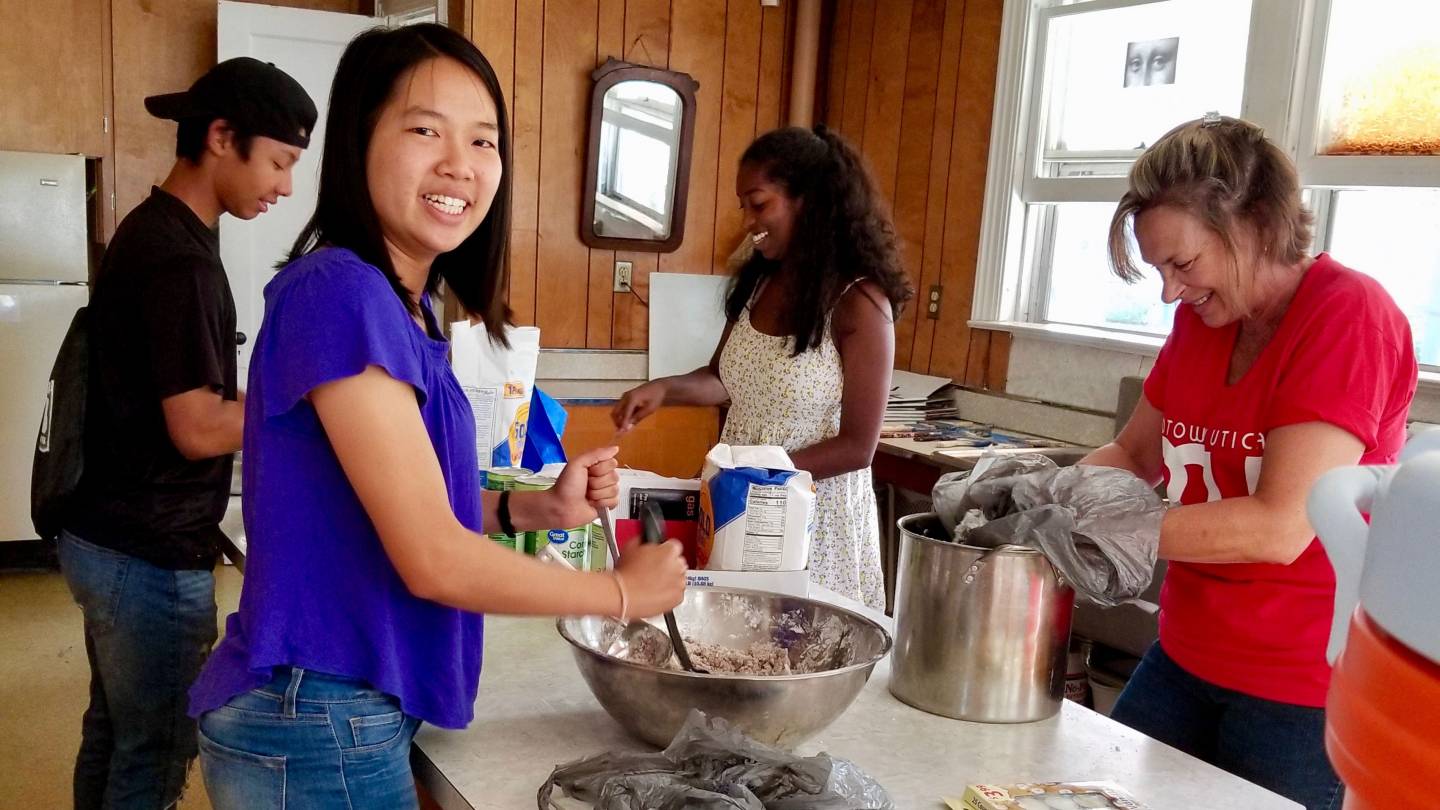 Irene Hsu, Class of  2020 (left foreground), helps staff and youth workers to create DIY colored powder for a color run activity at MUCC's summer camp. She said that while interviewing refugees for the oral history project she realized the gravity of “the immense hardships [refugees] have encountered in escaping war. … Refugees didn’t choose to be refugees … [and] they wish everyone understood that.”
Photo by Chris Sunderlin

“It was a striking moment for me to feel the connection we shared and the subsequent differentiation in our life experiences,” Rivera said, “…[and] to consider how the place that I call home is both welcoming and diverse, but also full of separations.”

Amna Amin, Class of 2021, who interned at Islamic Relief in North Carolina, was inspired by the optimism of a Syrian torture survivor she interviewed. “This conversation was meaningful to me since it reminded me that the ability to do good is a privilege that others don’t always have.”

Hsu, who interned at the Midtown Utica Community Center in Utica, New York, interviewed a young man from Syria who had witnessed heart-wrenching violence when crossing the Syria-Jordan border. She said she realized the gravity of “the immense hardships [refugees] have encountered in escaping war. … Refugees didn’t choose to be refugees…[and] they wish everyone understood that.”

At Lutheran Immigration and Refugee Services in Washington, D.C., Amy Jeon, Class of 2021, interviewed a Cambodian man who resettled in Tennessee in the ’60s and faced discrimination when restaurants and gas stations refused to provide him service. “United States history is not just black and white,” Jeon said. “Many different minorities and people of color settle and participate in this history.

“I think that being able to meet with someone, even a stranger, and listen actively and graciously to their story is an important skill,” Jeon continued. “It is a great privilege to have someone, especially from a vulnerable population, entrust me with their story, and the process has provided so many moments of heartfelt connection and newfound learning.”

Many of the interns found that these personal narratives demonstrate how faith serves as a primary force in the lives of refugees. Unlike leaving behind most of their belongings, refugees do not have to leave their faith behind. It can bridge them to the home they were forced to leave and provide community in the new home they seek to find. 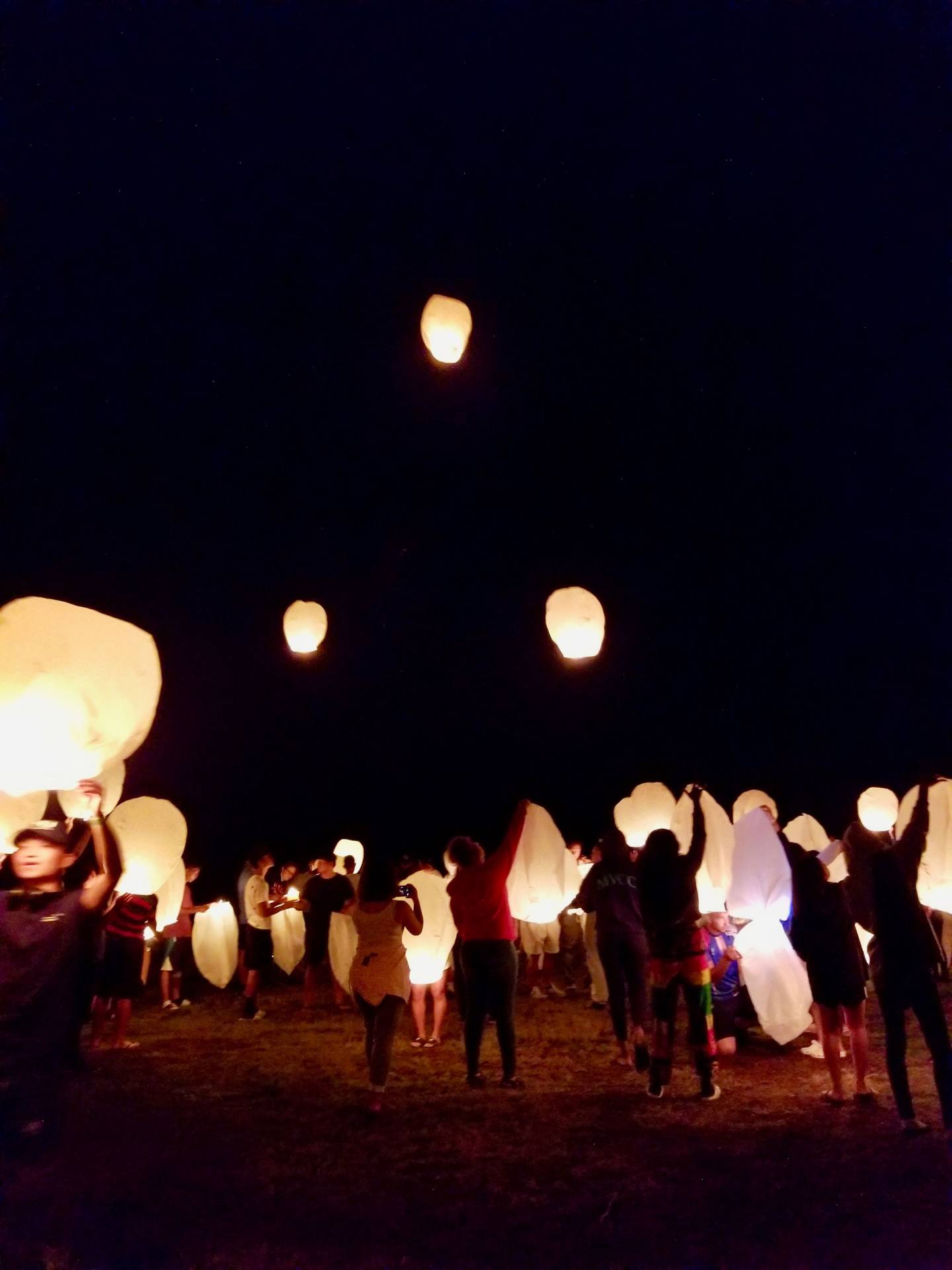 Paper lanterns are released into the night sky during the MUCC summer camp in Utica, New York, where foreign-born residents constitute nearly 20% of the population, including refugees from Bosnia, Myanmar and Vietnam, among other countries.

Imane Mabrouk, Class of 2021, who interned at New American Pathways in Atlanta, said: “I've heard the most heartbreaking stories during my interviews — seeing murders happen in front of you as a child, being stuck in the Indian Ocean on a boat with no food for months, having to walk for weeks to find a square mile of safety, and it made me wonder, ‘How does anybody survive this emotionally? How is this person sitting in front of me right now telling this story?’ Every refugee I've spoken to has credited their faith as their sole motivator and helper in staying strong. … Practicing their religion allows them to belong to their religious community in the United States, making everyday life feel less lonely.”

Amin said, “For a lot of refugees, their faith gets stronger in the face of adversity and gives them comfort during difficult times.” She credits her interest in applying for this internship and welcoming refugees to her own Muslim faith.

Wallk met many refugee families through a church that provides long-term support for newcomers. Many of the people she interviewed said that “the most important part of religion is not theology or practice but being a good person and treating others in the best way possible.”

The students reflected on how they will bring what they have learned back to campus.

Amin said the internship “has prompted me to more deeply consider questions such as how will the work that I do contribute positively to the person that I want to become? I know that the example my co-workers set and the workplace environment I experienced this summer will be influential for me when I return to school and consider what my next step will be after Princeton.”

As a rising junior, Mabrouk said: “This experience was the best thing that could have happened to me during my halfway mark at Princeton. It has shown me how strong and resilient people can be no matter what they go through, and will give me motivation to complete my last two years so I can go into the world and use my education in a positive way.”