by Matt Soniak for the Office of Engineering Communications

In August 2015, a dust storm blanketed large areas of seven Middle East nations in a haze of dust and sand thick enough to obscure them from satellite view. The storm led to several deaths, thousands of cases of respiratory ailments and injuries, and canceled airline flights and closed ports.

At the time, the storm's unusual severity was attributed to the ongoing civil war in Syria by media outlets in the Middle East, Europe and the United States. Reports blamed the conflict for changes in land use and cover — and for activities like increased military traffic over unpaved surfaces and farmers reducing irrigation or abandoning agricultural land — that created extreme amounts of dust to fuel the storm. 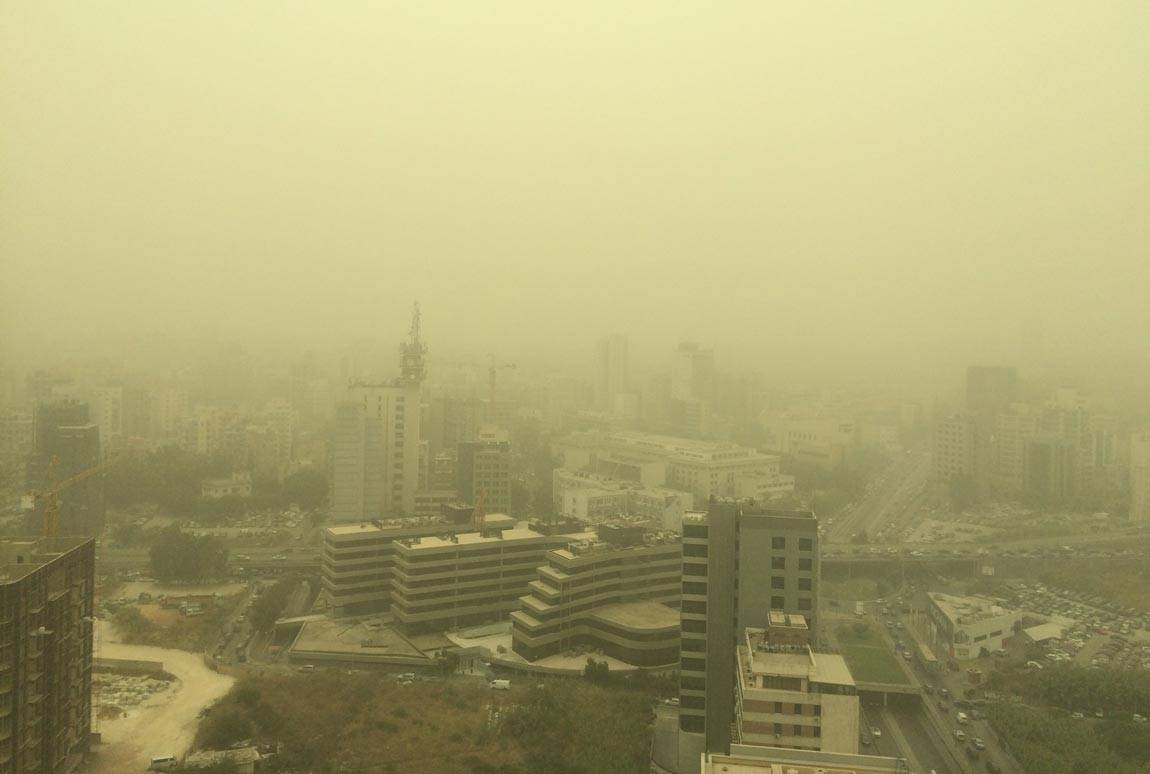 A dust storm that blanketed seven nations in the Middle East in late summer 2015 was caused by climate factors and unusual weather, not human conflict in Syria, concluded researchers including Elie Bou-Zeid, an associate professor of civil and environmental engineering at Princeton. Bou-Zeid took photos in Beirut, Lebanon, during the storm. (Photo by Elie Bou-Zeid, Department of Civil and Environmental Engineering)

Now, a team of researchers including Elie Bou-Zeid, an associate professor of civil and environmental engineering at Princeton who experienced the storm while in Lebanon, has found a more likely cause for the unprecedented storm — it was not human conflict, but a combination of climatic factors and unusual weather.

While reduced vegetation cover and soil disturbance can make more sediment available for emission in dust storms, the researchers say, the widely reported link between the storm and the fighting in Syria was untested and lacked empirical support. "The reports suggesting that this was related to the conflict in Syria were not supported by any research," Bou-Zeid said. "It was just hypotheticals thrown into the air."

As the storm got more attention, Shmuel Assouline of Israel's Agricultural Research Organization and Bou-Zeid emailed several colleagues and suggested they look into cause of the storm.

For their study, published Nov. 8, 2016, in Environmental Research Letters, the researchers first analyzed vegetation cover data for the months leading up to the storm to see if the Syrian conflict had really changed the land cover that much. "These observations told us that the normalized difference vegetation index (NDVI) — which is kind of a measure of how 'green' the surface is, how much vegetation there is — was not abnormally low," Bou-Zeid said. "So, there was nothing to suggest that during this particular period there was less greenery or agriculture in the region than normal." In fact, the storm-struck region's vegetation cover was nearly twice as high last year than the 2007-2010 average, and also greater than the 2001-2007 average.

After gathering data on surface air temperature, humidity and wind speed, and running meteorological simulations for the region before, during and after the storm using the Weather Research and Forecasting (WRF) model, the researchers say that climate, not conflict, led to the conditions that made the storm possible.

"The simulations showed that what was very unique about this storm is that first, it was preceded by a very hot period, and so the land that was not covered with vegetation would be drier and it would be easier to entrain sand grains from it," Bou-Zeid said. 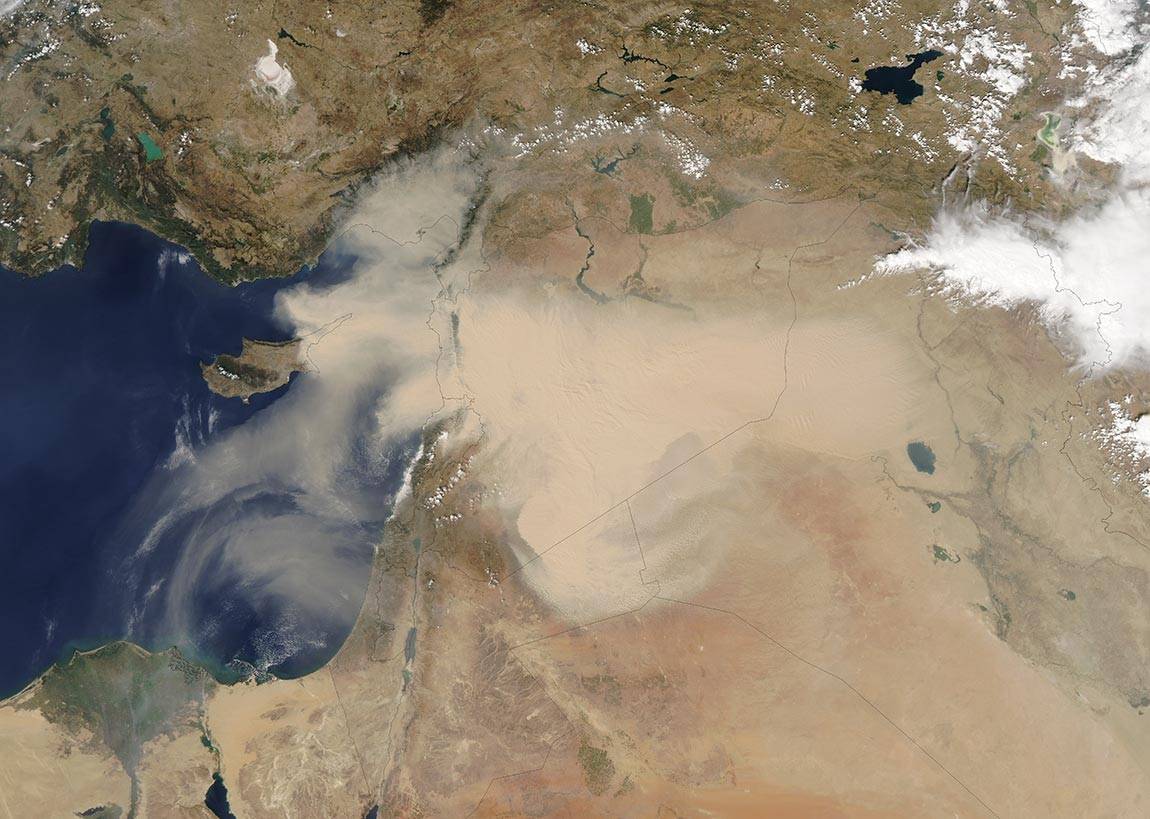 The 2015 Middle East dust storm as shown by the Moderate Resolution Spectroradiometer (MODIS) satellite. The satellite images, which track the storm from its inception on Aug. 31 to its peak on Sept. 8, can be viewed at NASA's website: worldview.earthdata.nasa.gov. (Image courtesy of NASA)

Summer 2015 was unusually hot and dry relative to the last 20 years, and extreme high temperatures and low humidity were more frequent in August and September than during the region's long-term drought, which lasted from 2007 to 2010, Bou-Zeid said. The extremely arid conditions increased the amount of dust available and lowered its threshold for erosion, making it more likely that the dust would dislodge into the atmosphere.

The other factor that helped generate the storm, the researchers say, was an unusual wind pattern. "Usually these dust storms are created somewhere between Syria and Iraq and are transported south, but during this period the wind pattern was going east to west," Bou-Zeid said. The wind reversal added friction on the ground — which dislodges more dust — and transported it westward over long distances before depositing it in high concentrations on the densely populated east Mediterranean coast.

Bou-Zeid said it was important to answer the question of the storm's origins directly. "If the cause of the storm was human conflict, then when the conflict ends, the causes go away, and that's all good," he said. "But if the cause was not conflict and is more climate, and this is due to climatic conditions that are going to become more frequent in the future, then this is something that will reoccur."

The team warns that if the Middle East becomes more arid in the long term due to climate change, extreme dust storms may become more common, and their impact unavoidable.

Bou-Zeid and Assouline's co-authors on the paper, "Climate, not conflict, explains extreme Middle East dust storm," were Anthony Parolari from Marquette University, Dan Li from Boston University and Gabriel Katul from Duke University. Support for the study came from U.S. Department of Energy, the National Science Foundation and the U.S. Department of Agriculture.