Meg Urry was the first tenured woman professor in the Department of Physics at Yale University and was often the only woman in her physics classes, including her graduate class at MIT, but she still heard a fellow student complain that women were unfairly given advantages over their male colleagues. "That's when I realized there was something fishy going on," she said.

Urry spoke at the 2017 APS Conference for Undergraduate Women in Physics (CUWiP) Mid-Atlantic Regional Conference at Princeton University the weekend of Jan. 13-15. She told students that she is still often the only woman in the room even though her department now has six out of 32 female faculty members — the highest number of the top 50 physics departments in the United States. "That's crazy, right?" Urry said. "If we were offered the same opportunities and had the same treatment, women would be half the faculty in every subject."

Urry, a professor of astrophysics at Yale whose research focuses on active galaxies that host supermassive black holes in their centers, was one of the plenary speakers at the conference, which focused on giving young women the tools to stay in physics and other STEM fields. More than 200 women attended the event.

A career panel was one of the many events at the 2017 APS Conference for Undergraduate Women in Physics held at Princeton Jan. 13-15. It was one of 10 regional conferences held simultaneoulsy across the country.(Photos by Elle Starkman, Princeton Plasma Physics Laboratory)

Urry noted that the percentage of women in the United States graduating from college with physics degrees has remained flat at 20 percent for the past decade. Women in physics and other fields are affected by unconscious bias, Urry said. She cited one study that found participants who were given the resumes of equally qualified men and women were more likely to pick resumes with men's names.

The Princeton CUWiP Conference was one of nine conferences nationwide and one in Canada that took place simultaneously. Other host institutions included Harvard University, Virginia Polytechnic Institute and the University of California-Los Angeles. The Princeton conference was offered free aside from a $45 registration fee and travel expenses. It was funded by the the Department of Energy's (DOE) Office of Science and the National Science Foundation through grants to the American Physical Society.

Shannon Swilley Greco, a Science Education program leader at the DOE's Princeton Plasma Physics Laboratory (PPPL), organized the conference with Lyman Page, chair of the University’s physics department, and graduate student Laura Chang. Greco told the young physicists that she hopes the conference will inspire them to stay in a physics or STEM field. "I don't ever want anyone to leave the field they loved because they felt ill-prepared," she said, "or because they just had so much doubt that they were afraid they weren't where they were supposed to be, or that they were made to feel unwelcome or uncomfortable."

The conference kicked off with a tour of University research laboratories, including the Andlinger Center for Energy and the Environment, the Department of Geosciences and PPPL. More than 60 people attended the PPPL tour, which visited the National Spherical Torus Experiment-Upgrade test cell and control room. "I love it!" said Bernadette Haig, a student at Fordham University. "This is new stuff for me, so it's really cool!" 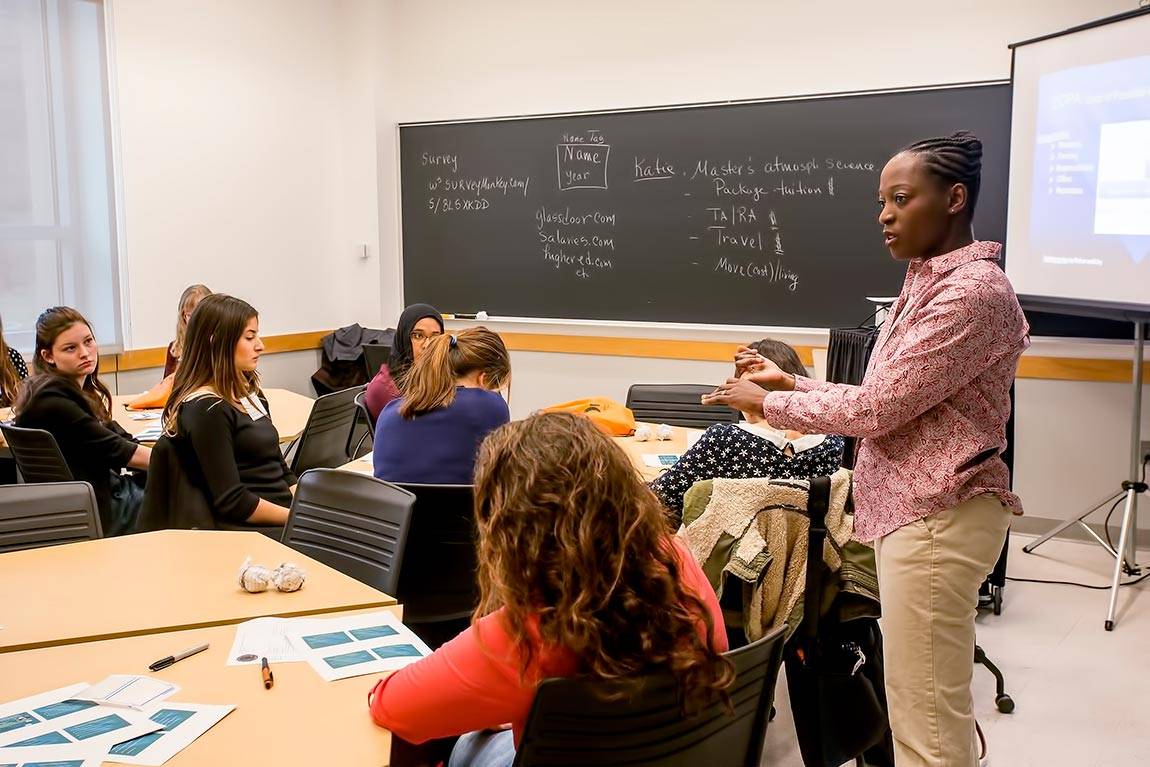 Josee Vedrine-Pauléus, a professor in the Department of Physics and Electronics at the University of Puerto Rico-Humacao campus, gives a workshop on negotiation.

A career panel made up of women at Google, Solvay, and Princeton and Rowan universities, advised the attendees to be persistent. "The golden rule is don't get discouraged," said Katerina Visnjic, a senior lecturer in the Princeton physics department, who is redesigning the introductory physics curriculum. "When you see scientific results presented, that is the last 1 percent of the work that went into that. It doesn't reflect the 99 percent that didn't work."

The conference offered a variety of workshops, including "mental health," "out in STEM," and "negotiation and other professional skills." In the workshop on "combatting imposter syndrome and bias and developing a growth mindset," David Yaeger, an assistant professor of psychology at the University of Texas-Austin, said: "Intelligence itself is malleable especially in your developing stage. Every time you do a hard mathematical proof, your brain actually changes."

One workshop focused on how to be an ally to under-represented groups. "If you have privilege, use that privilege," said Geraldine Cochran, dean of the Douglass Project for Rutgers Women in STEM. "If you are only looking at job candidates who have graduate degrees from Harvard and Princeton, why not look at people who did really well but have not gone to undergraduate institutions like that?" 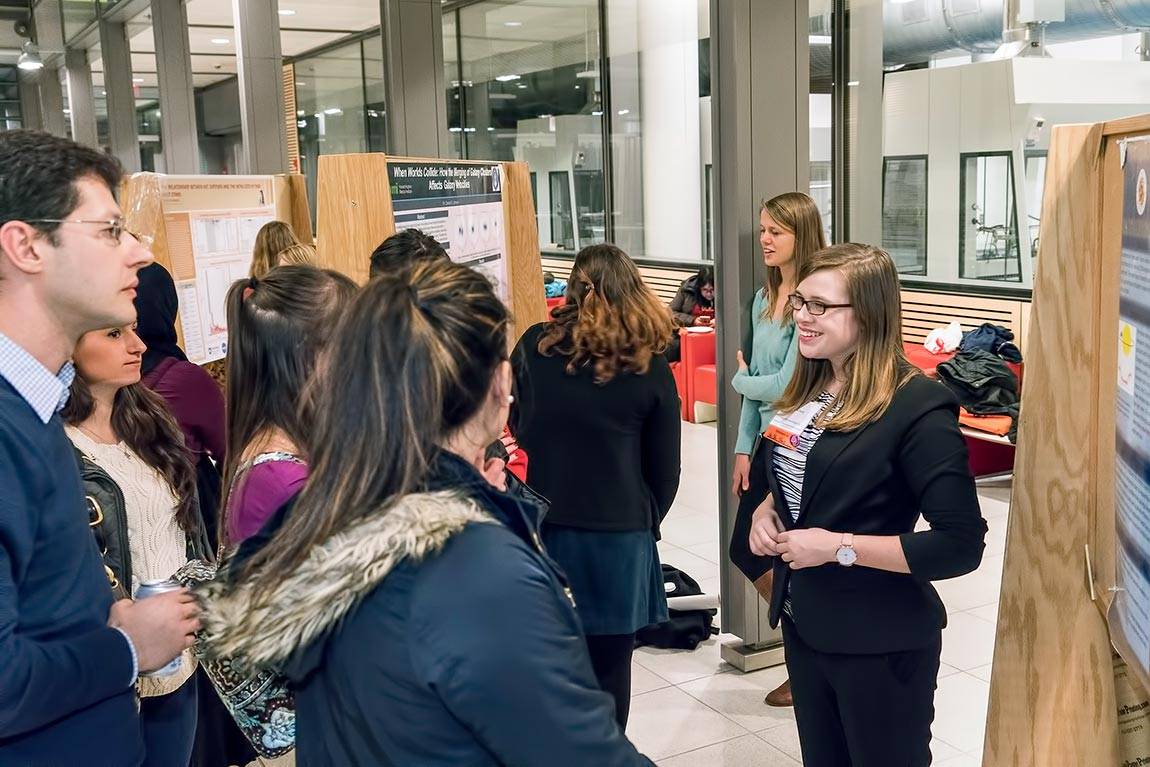 Undergraduates present their research at a poster session at Frick Chemistry Laboratory.

Students attending a workshop on work-life balance were encouraged to think about developing a plan that builds in time for outside activities and having fun. "How are you going to find ways to motivate yourself that help you feel fulfilled?" asked Amada Sandoval, director of the Princeton's Women's Center. "And what is a full life apart from what you imagined a successful life is?”

Nergis Mavalvala, a physics professor known for her work in the confirmation of gravitational waves at the Laser Interferometer Gravitational-Wave Observatory, broadcast her keynote speech from Harvard, with all 10 conferences broadcasting video greetings from their audiences.

Fatima Ebrahimi, a PPPL physicist, discussed her research studying a phenomenon in magnetic reconnection that could be used to start fusion devices called tokamaks and might also yield insights into magnetic reconnection, the process that triggers solar flames, the Northern Lights and other astrophysical phenomena. "If you know plasma physics, there's no boundary," Ebrahimi said. "You can do detailed analysis in the lab but then you can move on and answer fundamental questions in astrophysics."

Several students presented their research in a poster session at the end of the day on Jan. 14. On Jan. 15, Katja Nowack, an experimental condensed matter physicist at Cornell University, discussed her research. The conference concluded with a career and research expo at the Frick Chemistry Laboratory Building.

A small group of about 20 students attended a CUWiP Plus session at PPPL, where they spent Sunday afternoon and Monday morning learning about plasma physics led by physicist Arturo Dominguez, a Science Education program leader. A second group, called Physics on All Scales, learned about astrophysics through a giant radio antenna and a trip on Sunday to the Princeton University Imaging and Analysis Center.

Participants in the conference said they enjoyed meeting other female physicists. "I wanted to come to the conference because there are only eight women in my year in physics," said Katherine Guido, a student at the Stevens Institute of Technology in Hoboken, New Jersey. "I thought it would be really cool to talk to other women physicists."

"I think it's amazing," said Jessica Irving, an associate professor in geosciences at Princeton. "I've never been to a meeting like this before — a meeting full of women who are excited about science."

PPPL, on Princeton University's Forrestal Campus in Plainsboro, N.J., is devoted to creating new knowledge about the physics of plasmas — ultra-hot, charged gases — and to developing practical solutions for the creation of fusion energy. The laboratory is managed by the University for the U.S. Department of Energy's Office of Science, which is the largest single supporter of basic research in the physical sciences in the United States, and is working to address some of the most pressing challenges of our time.