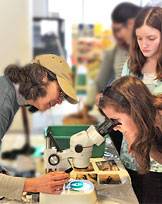 For 240 young women from area schools, the excitement of scientific discovery was illuminated by a visit to a Princeton University laboratory where researchers are pursuing a new energy source linked to the sun's power.

Fisher Middle School eighth grader Lucie came from Ewing Township hoping to learn more about science and to see technical demonstrations. Her schoolmate, Maria, wanted to find out about new fields of research.

Lucie and Maria were among the seventh- through 10th-grade female students from 28 area schools who journeyed to the University's Forrestal Campus in Plainsboro to attend the Young Women's Conference, an annual event sponsored by the U.S. Department of Energy's (DOE) Princeton Plasma Physics Laboratory (PPPL). 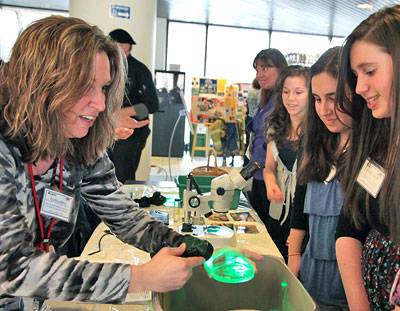 Patti Bruno, a senior health physics technician at PPPL, and the visiting students view a dragonfly nymph that Bruno caught in a creek near the laboratory earlier in the morning.

Scientists at PPPL are working to harness fusion energy, a clean energy source based on the same reaction that powers the sun. Showcasing the work of PPPL scientists and other researchers, the March 11 event was aimed at increasing young female students' interest in science, math and technology.

Lucie said the conference gave her "exactly what I hoped for." Maria said she was inspired by the visit and is "really interested in studying weather and astronomy."

PPPL postdoctoral researcher Stephanie Wissel, who directed the conference, told the young women during an introduction, "Being a scientist means being curious. Seize the opportunity and ask lots of questions while you are here."

In a welcome that touched upon energy issues, PPPL Deputy Director for Operations Adam Cohen added, "There is so much to learn at this lab and in this field (of fusion energy research). Imagine a role you could play." 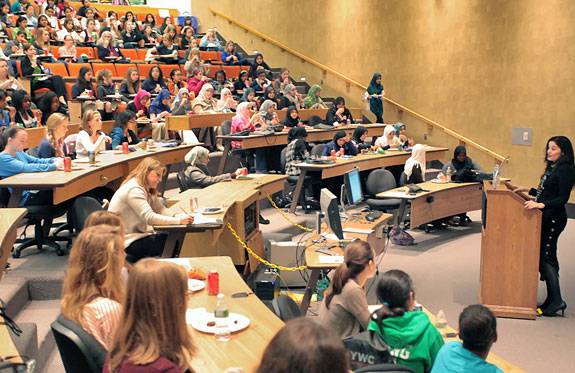 Cindy Quezada, a scientist who is actively involved with outreach efforts for young girls, addresses the Young Women's Conference participants in the PPPL auditorium. Quezada is a special assistant to the undersecretary for democracy and global affairs at the U.S. Department of State, where she holds a fellowship sponsored by the American Association for the Advancement of Science.

From physics to music to microplasmas

The annual conference began several years ago to provide female students with an opportunity to meet women working in scientific fields and to foster an awareness of varied career opportunities for women.

This year's conference included more than a dozen exhibitors, whose interactions with the students provided a lively atmosphere in the lab's lobby. The exhibitors gave hands-on demonstrations about topics such as plasma physics, the interplay between music and mathematics, and heat transfer between objects.

Courtney Kaita, a mathematics and cello performance student at the University of Michigan and a former PPPL summer intern, used her cello and numerical equations to demonstrate the connection between math and music.

Virginia Finley, who heads environmental compliance at PPPL, operated a display titled "Aquatic Macroinvertebrates Help Tell the Tale of Good Water Quality." Under a microscope, she showed larvae of the caddisfly -- an insect that resembles a moth -- collected from a streambed that collects the lab's discharge water. 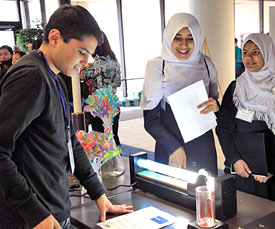 Graduate student Jeffrey Parker (left) oversees a display of plasma, the fourth state of matter, at the conference. Plasma is a hot gas of charged particles and is the fuel for fusion energy production, which is the focus of research being conducted at PPPL.

In addition, presenters in four small breakout sessions scattered throughout the lab discussed oceanography, artificial muscles, brain science and microplasmas, which are small gas discharges that can be used for applications such as medical sterilization.

Oceanographer Marian Westley, a researcher at the National Oceanic and Atmospheric Administration's Geophysical Fluid Dynamics Laboratory (GFDL) on the Forrestal Campus, delivered five 25-minute sessions about her research. She said no two sessions were the same because the girls asked great questions that led them away from her prepared talk. During one session, she made it through only a handful of her 20-plus slides when a student asked about the politicization of climate science.

"We talked about the scientific process," said Westley, who was presenting at the conference for the fifth year. "We discussed how scientists are trained to be skeptical since we often make progress by disagreeing with each other."

Jasmin John, also a GFDL researcher, presented a poster on Earth climate system computer models. She said the students asked good questions about climate change and were interested in the simulations, especially those of hurricanes and tsunamis. The simulations were relevant to the students since earlier that morning a large earthquake and resulting tsunami had struck Japan.

Jenni Zelenty, a University of Chicago junior who was an intern at PPPL for two summers, came back to inspire the next crop of young female scientists. Zelenty joined Watchung Hills High School teacher Sophia Gershman, who has been involved in PPPL programs, and Watchung Hills students in demonstrating a microwave-induced plasma experiment. Plasma is a hot gas of charged particles and is the fuel for fusion energy production.

Zelenty, who is a physics major at Chicago, recalled working on experiments as a high school student at Watchung Hills. "Having a research experience in high school got me started," she said. Describing the conference, Zelenty said, "[It shows] women supporting women in science."

The keynote speaker for the event was Kristina Johnson, the CEO of Enduring Energy, a wind energy systems firm, and former undersecretary of energy at the DOE. She said she became interested in energy and the environment during the first Earth Day in 1970. "That's because I had a great science teacher," Johnson said. Recalling how people threw trash out their car windows four decades ago without recognizing the impact of their actions, she noted that environmental conservation has come a long way, but still has far to go.

At the conclusion of the event, organizer Wissel said she was pleased with how the conference unfolded. "I was delighted with the variety of speakers and the young female attendees' level of interest and excitement about science," she said.