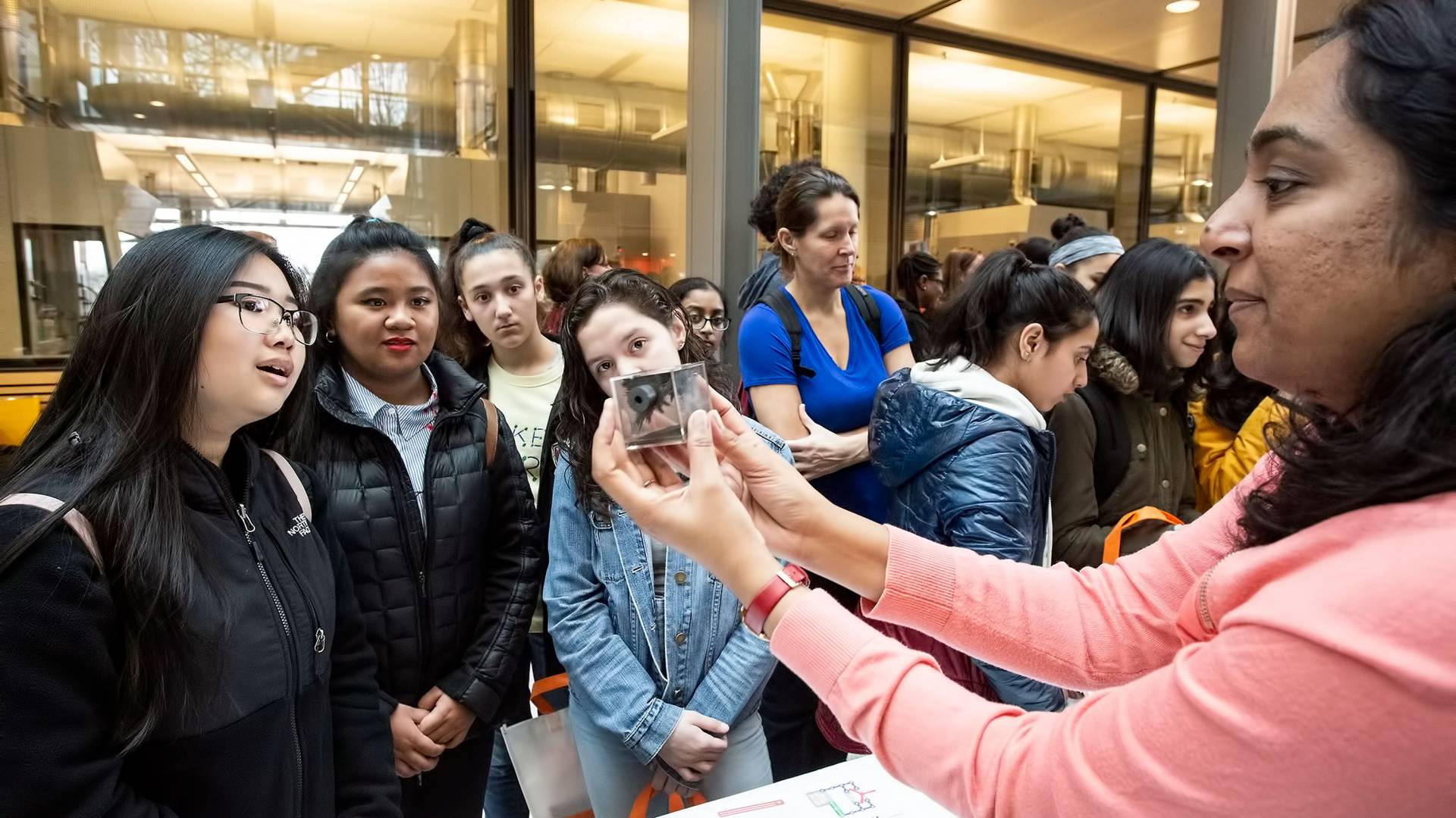 Ankita Jariwala, an engineer at the Princeton Plasma Physics Laboratory (PPPL), demonstrates a magnet to students at the Fords Middle School in Edison, New Jersey, as part of the annual Young Women's Conference in Science, Technology, Engineering and Mathematics (STEM). The event was held March 22 in the Frick Chemistry Laboratory at Princeton.

Some 750 seventh- to 10th-grade girls spent the day learning about computer coding, plasma science, artificial intelligence and other subjects through numerous hands-on activities at PPPL’s Young Women’s Conference in Science, Technology, Engineering and Mathematics (STEM) on March 22 at Princeton University.

The annual STEM conference, sponsored by the U.S. Department of Energy’s (DOE) Princeton Plasma Physics Laboratory (PPPL), brings girls from all over New Jersey, as well as Pennsylvania and Delaware, to take part in more than 40 activities, meet female scientists and engineers, and learn about cutting-edge science.

“I love it,” said Caroline Balick, an exhibitor from AI4All at Princeton University, a nonprofit organization seeking to increase diversity in the artificial intelligence field. “It makes me so happy seeing all these girls walking around interested in science.” 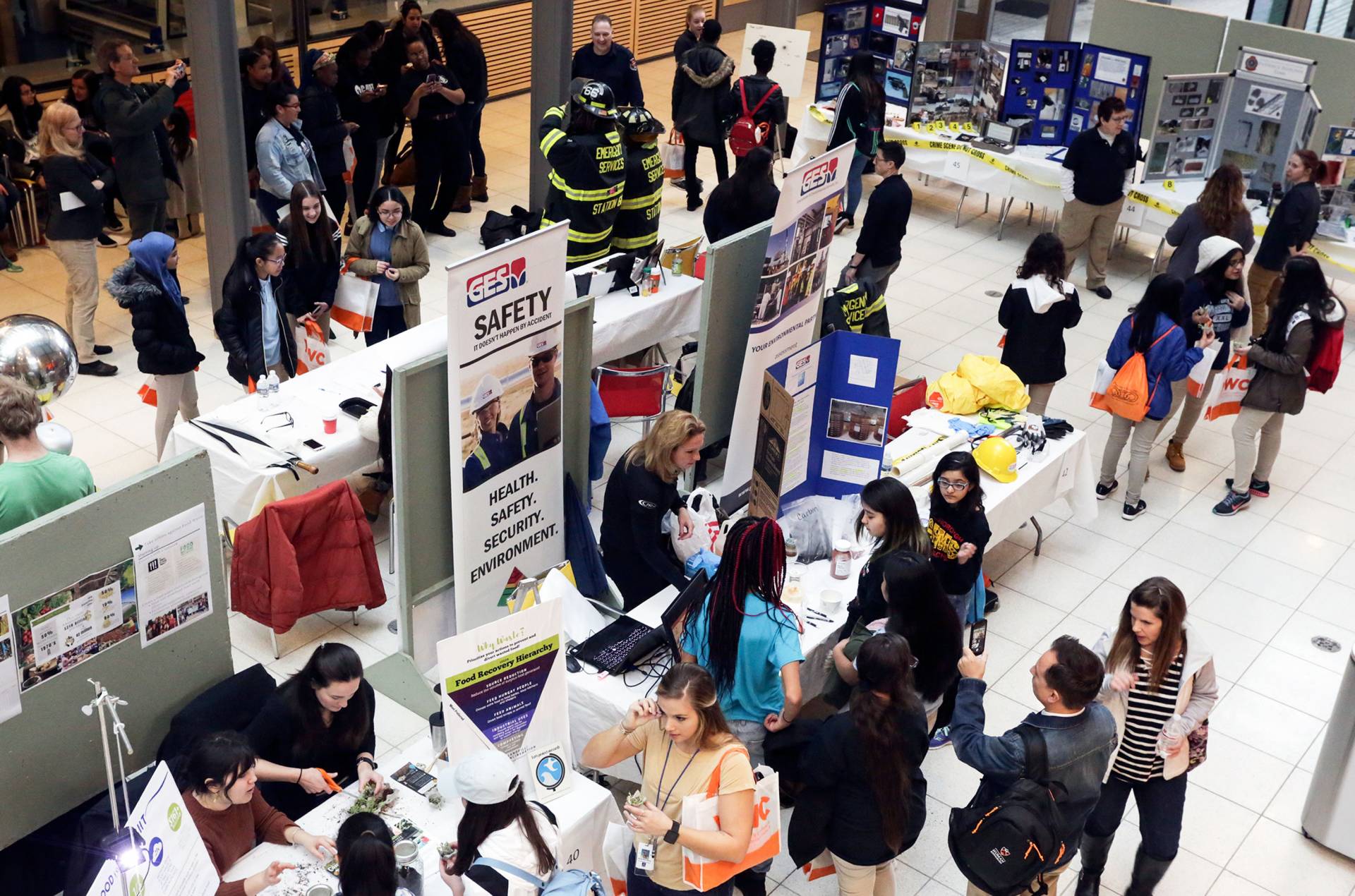 Deedee Ortiz, a program manager in PPPL’s Science Education Department who organized the conference, said the girls’ engagement was evident. “There was a tremendous amount of enthusiasm,” she said. “They loved all of it. They had two hours at the hands-on session and they were disappointed they had to stop.”

PPPL had several tables at the exhibition hall at Princeton’s Frick Chemistry Laboratory including a table by the Women in Engineering group where girls could learn about magnets and circuits, as well as exhibits offering hands-on plasma experiments, and even a booth staffed by PPPL’s Emergency Services Unit where students could try on fire fighting gear.

Lily Alia, a 10th-grader at West Morris Central High School in Chester, New Jersey, said she most enjoyed forming a chain with her friends to PPPL’s Van de Graaff generator, which demonstrates static electricity, and “being shocked by my friends.”

Anisha Iyer, a junior at Princeton High School who was one of the exhibitors, said she liked the variety of activities. “I think it’s interesting,” she said. “I like how there are a lot of different booths and a lot of different things to do.” 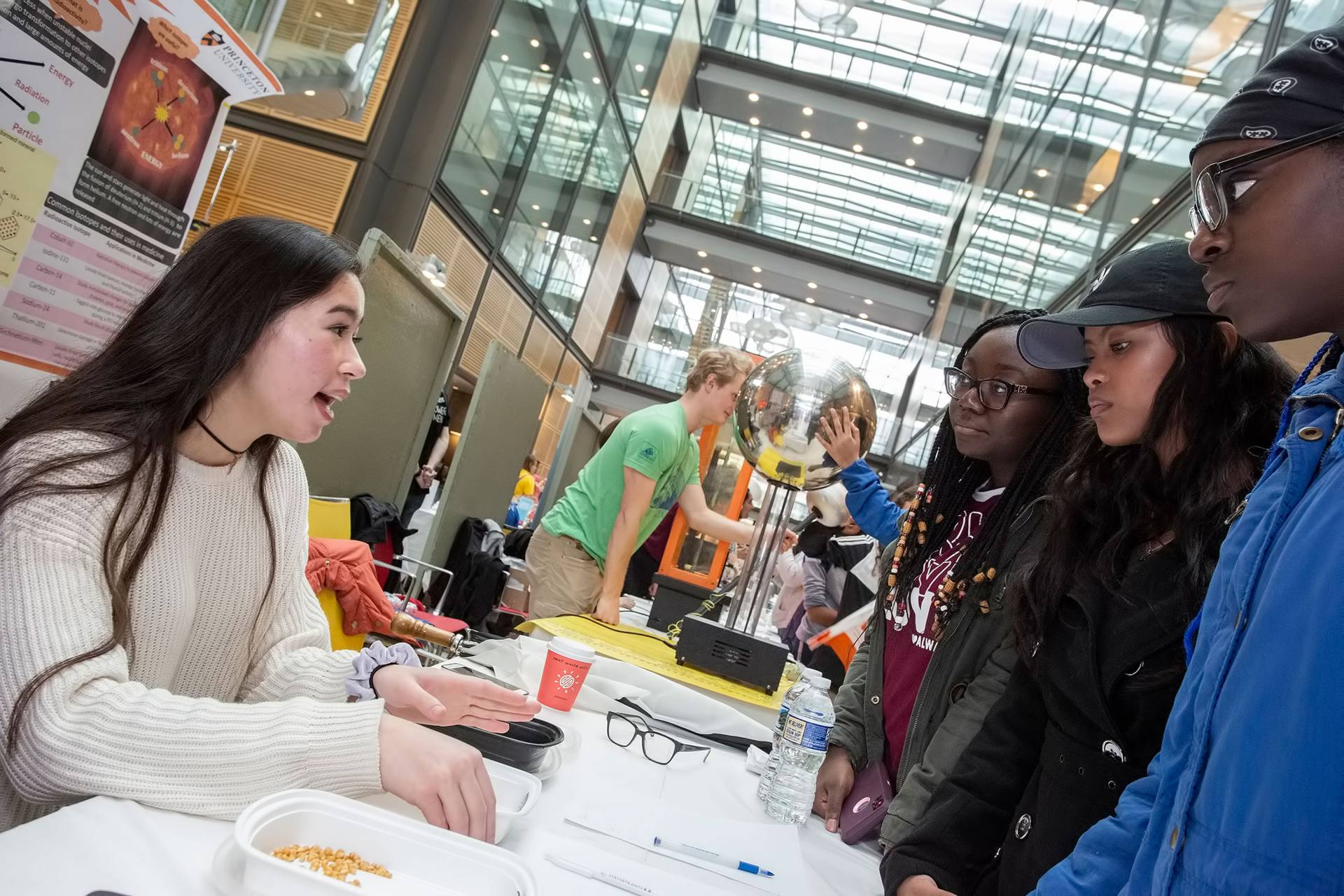 The annual conference had more exhibitors than ever before with new exhibitors like the Liberty Science Center, the New Jersey Department of Environmental Protection, as well as several exhibits by young women themselves such as TCNJ TechGirls from the College of New Jersey and GEMS (Girls into Engineering Math and Science).

Charisse Miglis, a physics teacher at Kilmer Middle School in Trenton, said she brought her honors physics class. “I look forward to it every year,” she said. “Some of the things we’re doing in the classroom they get to see here.”

More than 50 volunteers from PPPL, Princeton University, and numerous science organizations made the event a success by serving in numerous roles, including exhibitors, group leaders and registration helpers. “This is the 18th year that PPPL has done a young women’s conference,” noted Andrew Zwicker, head of the PPPL’s Office of Communications and Public Outreach. “Every year is better than the year before. That doesn’t happen without the amazing work of our volunteers.”

In addition to hands-on activities, the students were treated to an eye-popping chemistry show by Kitty Wagner, of Princeton’s chemistry department. They also listened to a panel discussion by three early-career women scientists. 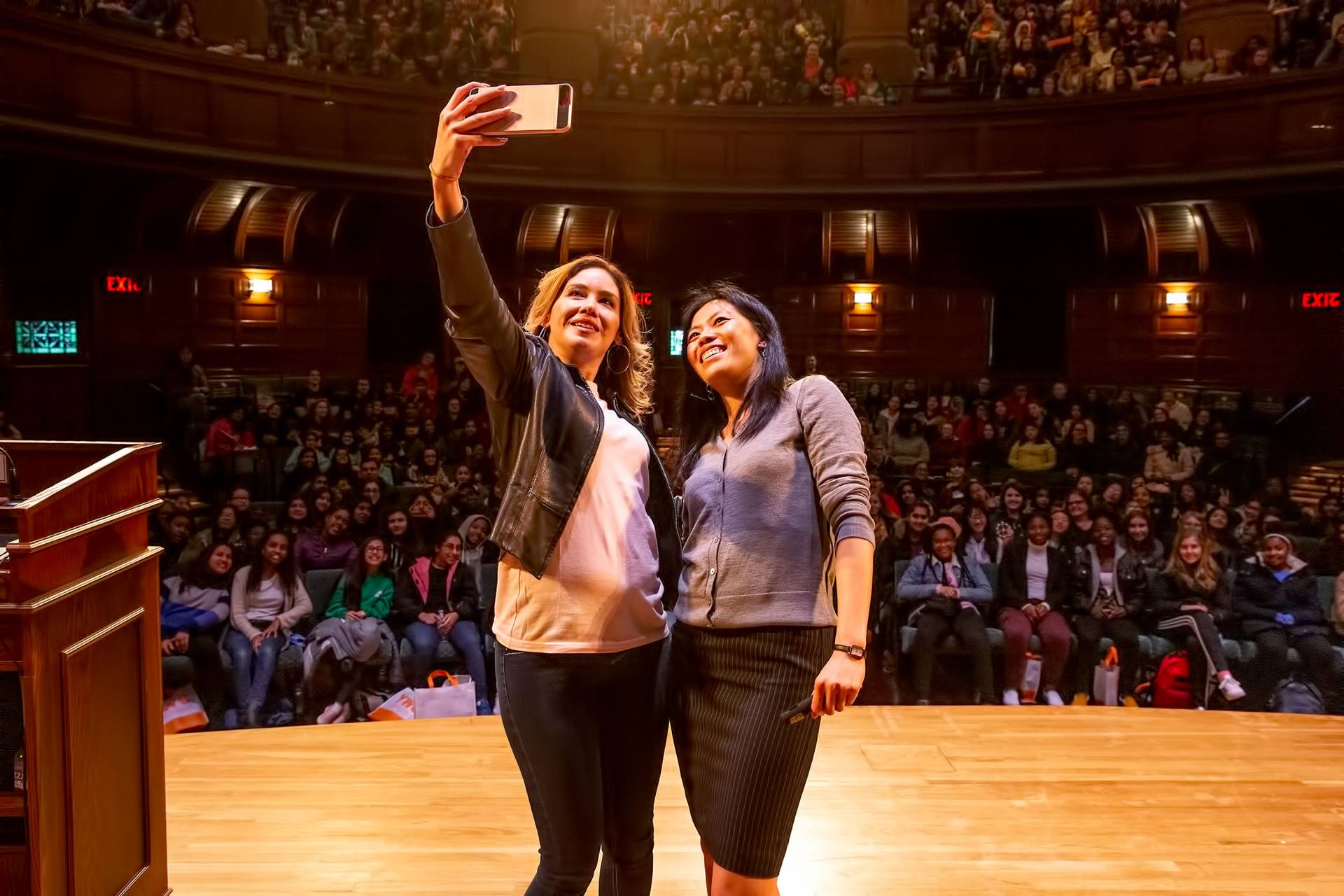 In her speech at Princeton’s Richardson Auditorium, Ma recalled that she wanted to be a scientist from an early age and she first wanted to be an astronaut. “Then I decided I actually really liked school and I decided to go to grad school at UC San Diego and get my fill of surfing and now I’m a physicist!”

Ma said there is massive demand for energy, which will only increase as industrial development continues. The answer, she said, may someday be to “build a miniature sun on Earth” using fusion energy. Fusion energy would have several advantages — it would be safe and sustainable and abundant, she said. The National Ignition Facility is trying to do this using a technique called inertial fusion, while PPPL is trying to do this using a different technique called magnetic fusion.

“If it can work,” Ma said. “It’s completely clean, it’s a limitless energy source and we really believe it’s the answer for human kind for the future.”

In the end, Paige Larson, a 10th-grader from Metuchen, New Jersey, who wants to be a computer scientist, pronounced the conference a success. “I think it was very informative,” she said. “It was interesting to see people do all different types of STEM jobs.”

PPPL, on Princeton University's Forrestal Campus in Plainsboro, New Jersey, is devoted to creating new knowledge about the physics of plasmas — ultra-hot, charged gases — and to developing practical solutions for the creation of fusion energy. The Laboratory is managed by the University for the U.S. Department of Energy’s Office of Science, which is the largest single supporter of basic research in the physical sciences in the United States, and is working to address some of the most pressing challenges of our time.