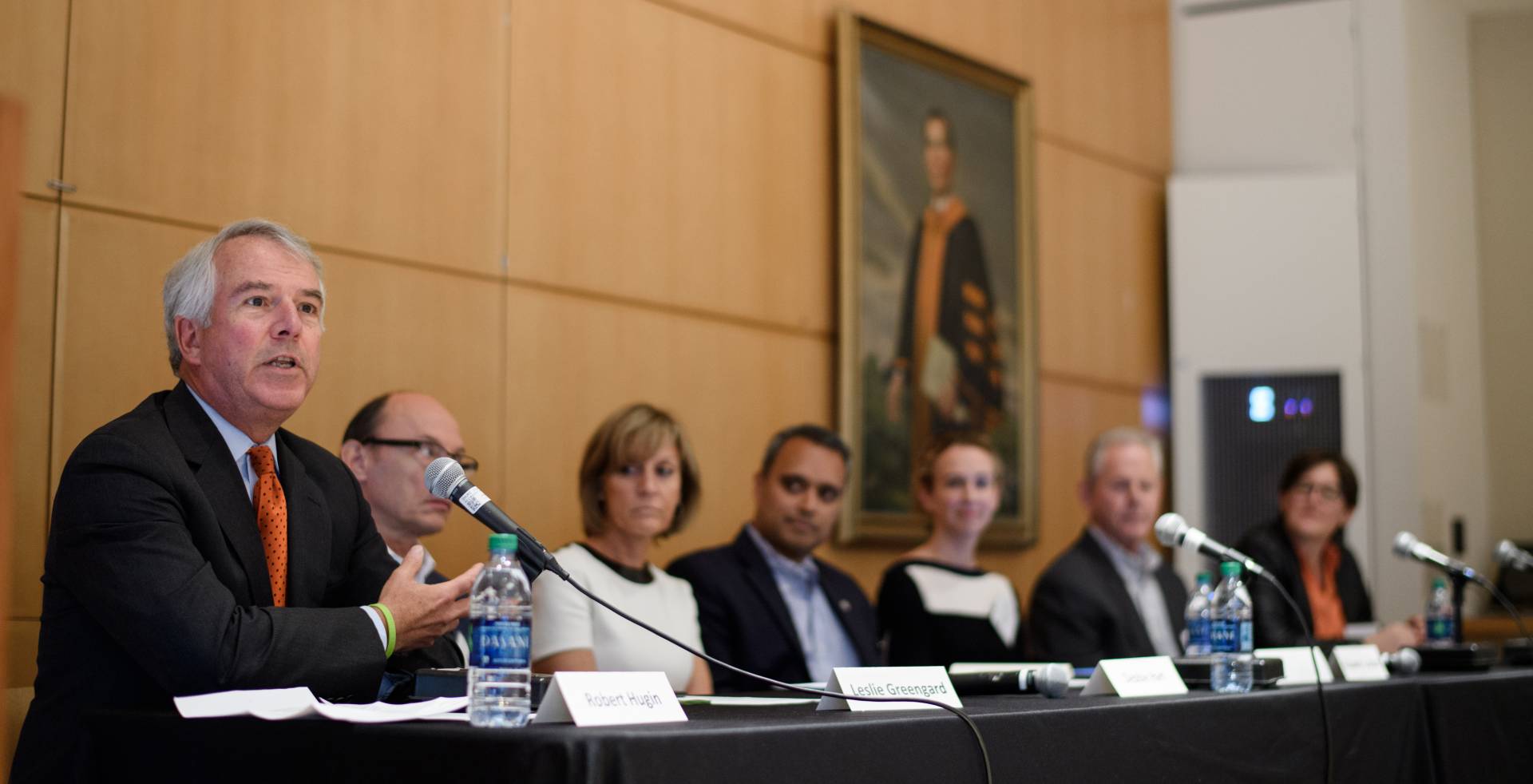 A daylong conference on biomedicine and data science at Princeton University on Oct. 25 concluded with a panel discussion of opportunities and challenges for building a hub of research and innovation in New Jersey. Panelists included, from left, Robert Hugin of Celgene Corporation, Leslie Greengard of the Flatiron Institute, Debbie Hart of BioNJ, Prakash Balan of the National Science Foundation, Elizabeth Bruce of Microsoft, William Welsh of Rutgers University, and Jennifer Rexford of Princeton University.

Companies and academic institutions of New Jersey have a unique opportunity to solve health care problems and grow new businesses at the intersection of biotechnology and data science, a panel of leaders from industry and academia concluded at a conference convened by Princeton University on Oct. 25.

"It is a critical time in New Jersey," said Debbie Hart, president and CEO of BioNJ, an industry group for biotechnology and life sciences companies. "We are at a tipping point where there are a number of things stacked up about to happen that will make a big difference." She cited a new incubator space for early-stage companies, the Princeton Innovation Center Biolabs, that the University will soon open along Route 1 as a "game changer" along with a range of corporate initiatives and the state's recently created Biotechnology Task Force.

Hart was one member of a panel discussion that concluded a day-long workshop bringing together about 65 leaders from regional biotechnology companies and national organizations as well as faculty from Princeton and Rutgers University. The event was organized by Princeton University's Office of Corporate Engagement and Foundation Relations with the School of Engineering and Applied Science.

"We are thinking about a whole ecosystem and what we can potentially build together," said Emily Carter, dean of the engineering school, as she introduced the day's events. "I fully believe the work we do together will be more than the sum of the parts." 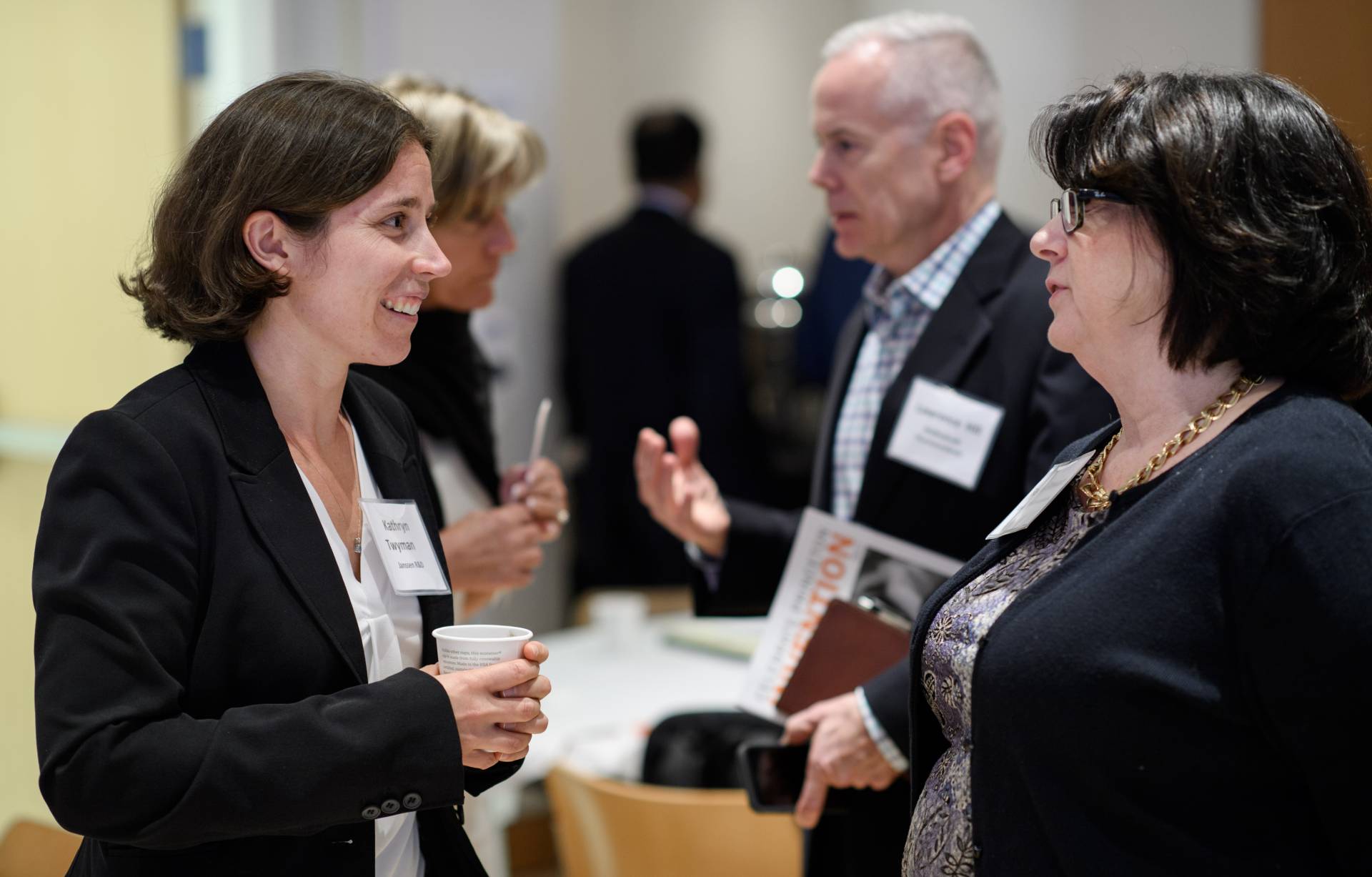 Throughout the day, Princeton researchers presented their work at the emerging intersection of data science and biology and medicine. Talks covered subjects such as "Computational Cancer Genomics" and "Machine Learning for Personalized Health Care." From the Princeton Neuroscience Institute, Co-Director Jonathan Cohen explained how a deep collaboration with Intel has enabled real-time processing of data from brain images, and Professor Sebastian Seung described how he has mobilized online gamers around the world to help create 3-D reconstructions of neurons.

The day ended with the panel, moderated by Robert Hugin, executive chairman of Summit, N.J.-based Celgene Corporation, discussing how the region between Philadelphia and New York can build stronger connections and increase its attractiveness as a hub for biomedical data science.

"The societal issues we face are so overwhelming and the technology we're talking about today, bringing biology and information technology together, is one of the few areas where we have the potential for solutions," said Hugin. He noted particularly the costs of caring for age-associated diseases such as Alzheimer's, which he said, in the United States alone, will outstrip the current spending on national defense by 2050. "If we don't deal with Alzheimer's disease, metabolic disease, cancer — all diseases of the elderly, there will be no discretionary spending. We will undermine the economic stability and the fabric of all developed societies. This is a national imperative."

Panelists agreed that the region, with a large pharmaceutical and biotech presence as well as Princeton, Rutgers and other institutions, has a strong foundation, but noted a number of challenges.

William Welsh, professor of bioinformatics at Rutgers, said that partnerships between academic researchers or between academic labs and businesses, which lead to innovation and new companies, rely too much on serendipity. He cited a collaboration he has with Herschel Rabitz, the Charles Phelps Smyth '16 *17, Professor of Chemistry at Princeton, whom he met by chance and with whom he now works to commercialize pharmaceutical research.

"It shouldn't be serendipity," Welsh said. "Academicians don't know which doors to knock on, especially with big pharma. And big pharma doesn't know who to reach out to in academia in the whole realm of biomolecular information technology and clinical informatics. We need models and structures that bring people together." 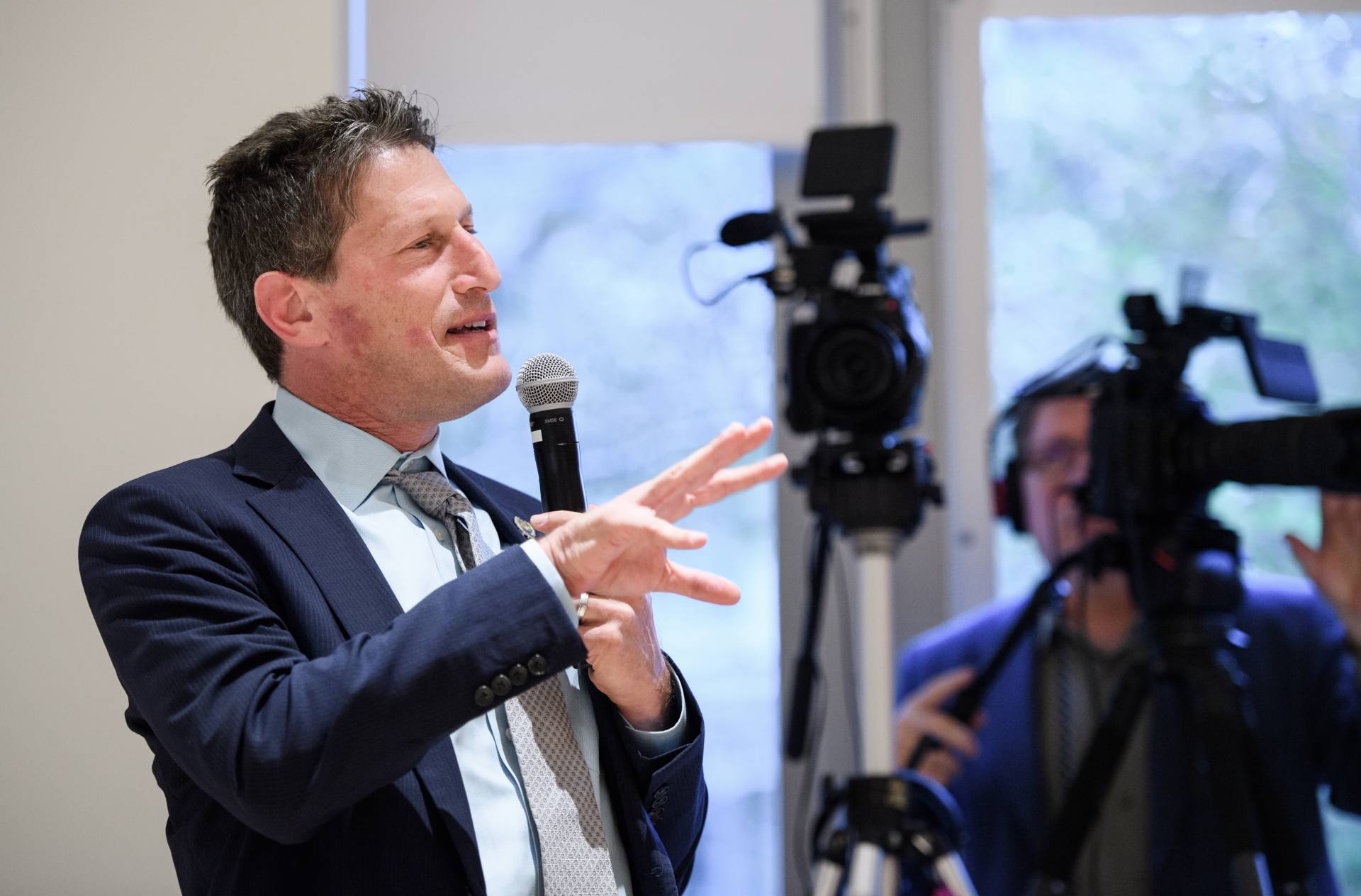 The event included active discussion between participants and speakers. Andrew Zwicker, a member of the New Jersey Assembly and head of communications and public outreach at the Princeton Plasma Physics Laboratory, was among the participants.

Jennifer Rexford, the Gordon Y.S. Wu Professor in Engineering and chair of Princeton's Department of Computer Science, said she sees an opportunity for academics to work with data sets from industry that are not usually available to them, and an opportunity for industry to mine their data in innovative ways using algorithms that academic researchers have developed.

Another strength of universities is convening various groups "on neutral ground," said Elizabeth Bruce, university lead in technology and corporate responsibility at Microsoft. "So events like this are really important." Bruce said a particular area that universities could help navigate is how to establish models for collaborative research that do not get bogged down in agreements about intellectual property. She said much work and data-sharing can be done at a "pre-competitive" level before specific commercially marketable technologies have been developed.

"Sharing data across companies and universities is hard but would be an amazing accelerator," Bruce said.

Prakash Balan, a program director at the National Science Foundation, agreed that identifying pre-competitive areas is critical. "This is an area where universities can really excel in building some strong university-industry partnerships," he said. He cited a 45-year-old program at the National Science Foundation, the University-Industry Cooperative Research Centers Program, which involves 75 sites and 876 paying members. "You're talking about battalions of lawyers who have agreed to this straightforward IP [intellectual property] framework."

Leslie Greengard, director of the Center for Computational Biology at the Flatiron Institute, also urged the assembled groups to create model agreements and documentation about a wide range of issues such as intellectual property, publishing, commercialization and timelines. "This could be laid down in template systems that all the New Jersey universities could abide by," he said.

"In this way, you could create long-lasting ecosystems that spin off a lot of value," Balan said.