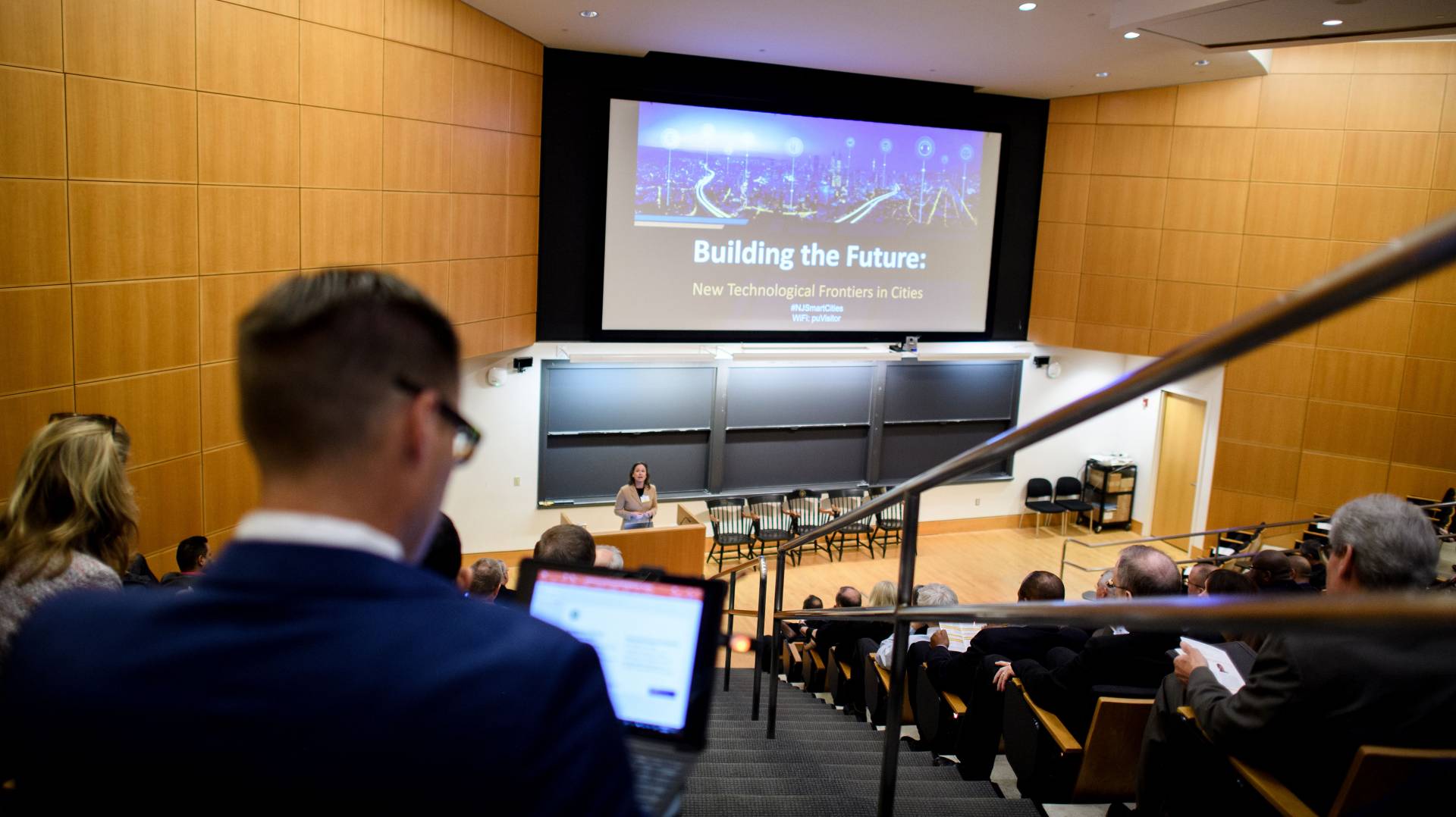 Emily Carter, dean of the School of Engineering and Applied Science, welcomes partners from industry, governments and other universities at the opening session of the "Building the Future: New Technological Frontiers in Cities" conference on May 6. Carter said such collaborations are an important part of the University's initiative to help make cities more resilient, sustainable, livable and equitable.

Any attempt to address challenges of the future, from clean energy to a sufficient food supply, must grapple with the issues raised by the planet’s rapidly growing cities, speakers said Monday during a conference at Princeton University.

“We believe that the future of cities is the future of the planet,” Emily Carter, the dean of engineering, said in her opening address May 6 in the Friend Center lecture hall. “What we decide to do in terms of how cities evolve in time is going to determine whether the planet survives climate change” and how society fares in many ways, including issues of inequity. 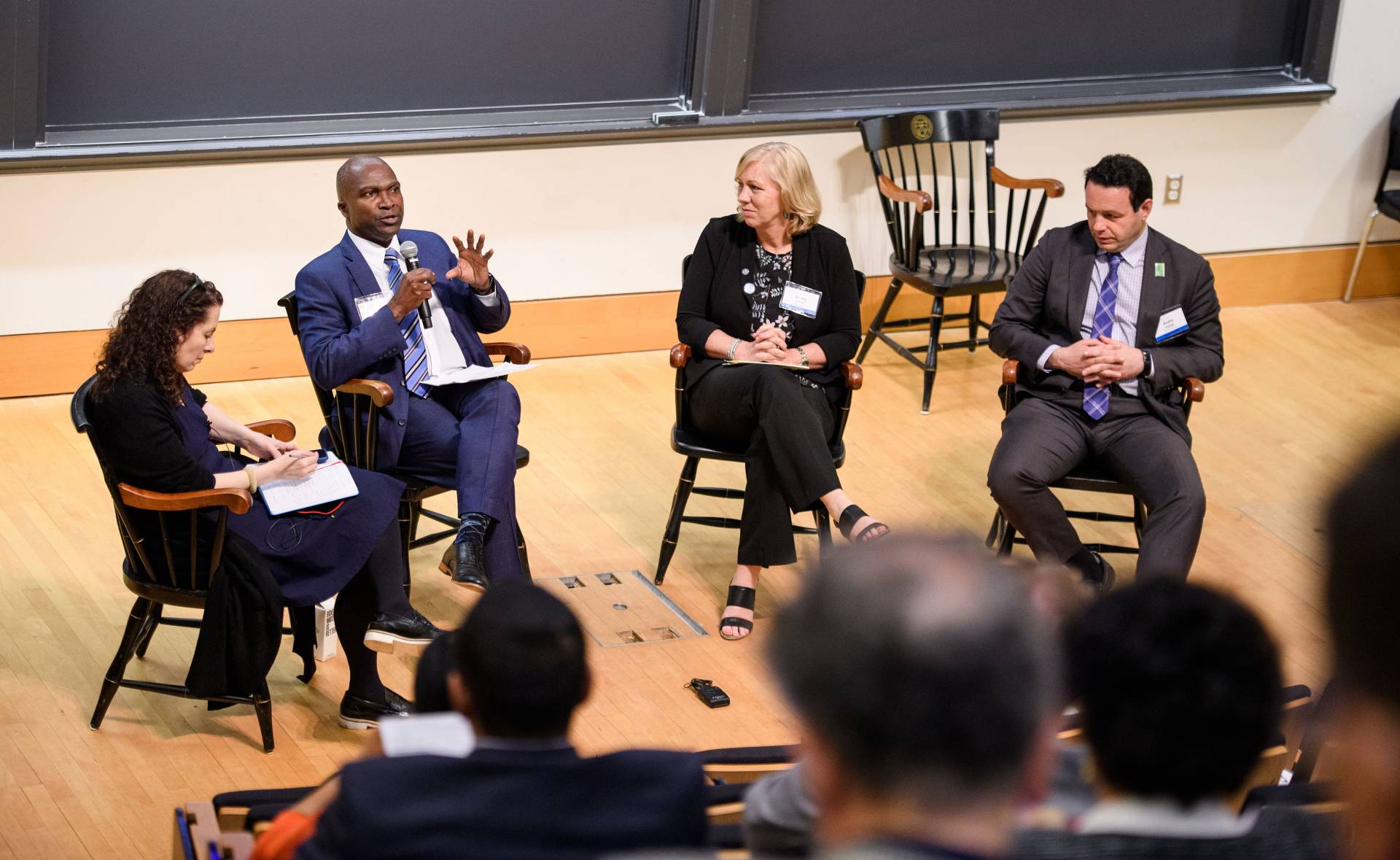 Adrian Mapp, mayor of Plainfield, speaks at the closing session of the symposium about the challenges currently facing his city, while (from left) New Jersey Chief Innovation Officer Beth Simone Novek moderates the panel discussion between Mapp and fellow mayors Shelley Brindle of Westfield and Andre Sayegh of Paterson.

“New Jersey state government is committed to innovation-based economic development,” said Carter, the Gerhard R. Andlinger Professor in Energy and the Environment. She said that New Jersey not only has the nation’s densest population, it also has the greatest proportion of Ph.D.’s. “The New York City-Philadelphia corridor’s density provides the best lab for urban technology in the U.S. not just because it is dense, but because it covers the full spectrum of density and town sizes.”

The conference highlighted Princeton’s new metropolis project, which supports research into systems and technologies that will shape cities that are more sustainable, resilient, livable and equitable. Speakers and panelists said that as the world population continues to urbanize, the ways in which cities cope with that growth will be among the most critical decisions facing global leaders. 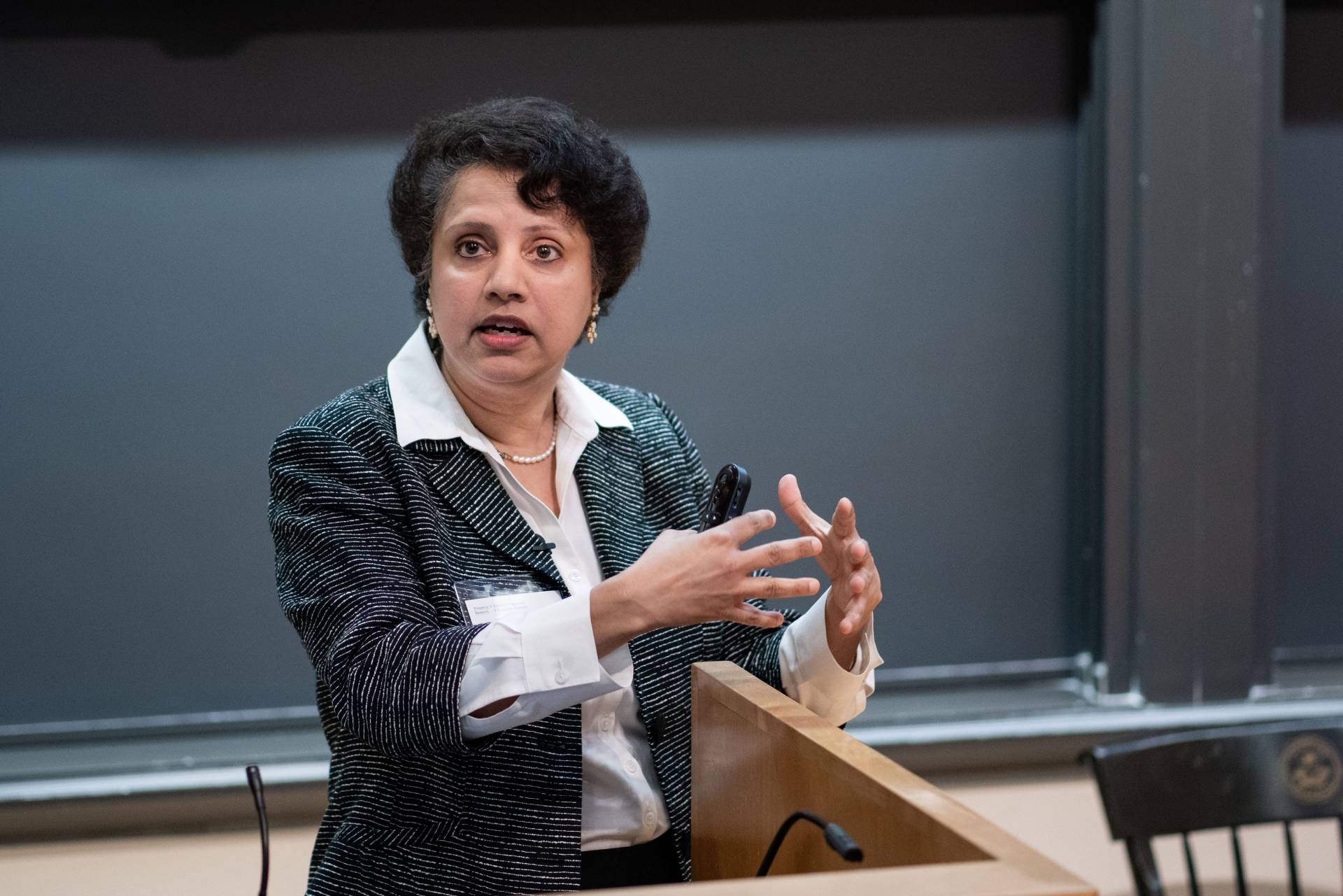 Anu Ramaswami, the Charles M. Denny, Jr., Chair of Science, Technology, and Public Policy at the University of Minnesota, gives the first keynote address of the conference.

“We are going to be, by and large, an urban species,” said Elie Bou-Zeid, a professor of civil and environmental engineering and one of the conference organizers.

Bou-Zeid, whose research frequently focuses on urban climate, said that over half the world’s population lived in cities by 2005, and that number is projected to grow to 68 % by 2050. Over the same time, urban areas are expected to approximately double in size by 2050. Although that poses challenges, he said, it also means that society has a chance to plan and build half of the infrastructure that will support future cities.

“This is a great opportunity,” he said. “We really have to try to build these new cities, and retrofit existing ones, better than we have in the past.”

Bou-Zeid said that solving these challenges will require cooperation among academia, industry and policymakers. It is not enough to make research breakthroughs if they are not workable economically or if they are unacceptable to city residents.

“We need to be broad in our thinking about what type of technologies we can use,” he said. “How can you take it from the academic lab all the way to making an impact at the planetary scale?”

Ramaswami, the chair of science, technology and public policy at the University of Minnesota’s Humphrey School of Public Affairs, spoke of the importance of understanding cities as part of a larger framework that includes regional and global effects. She said policies and technologies must take these wider pictures into account.

“Cities have large multiscale effects that have impacts outside their boundaries,” she said. “It is not about individual widgets and gadgets and gizmos. Those are important, but they sit in this larger frame.”

Carr, a 2003 Princeton graduate and the internet of things strategy and sales lead for Microsoft, spoke of the importance of coordinating the immense amount of information that cities need to function properly.

“The city cannot run on its own,” he said. “It has to be collective. That is the only way it can work.” 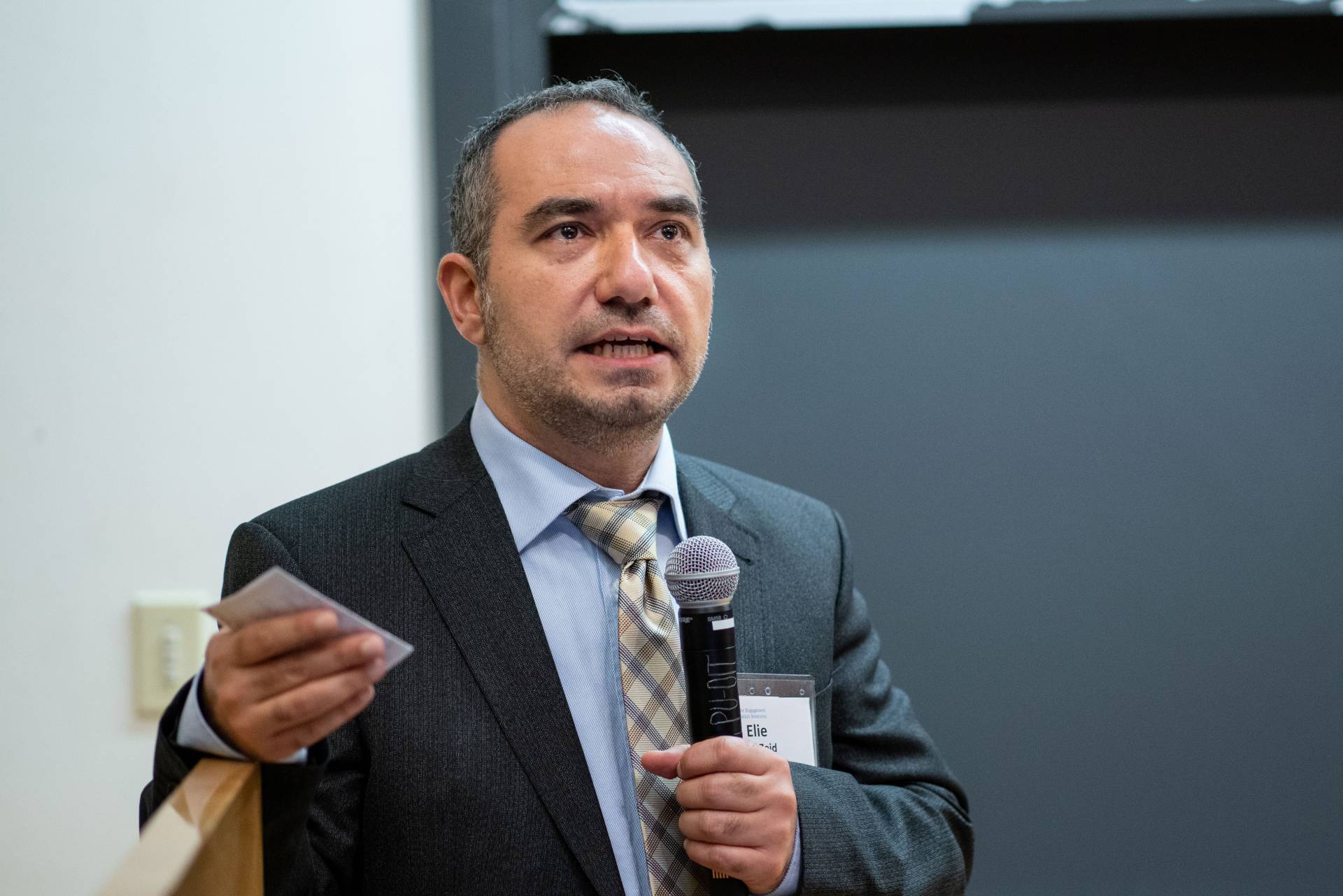 Elie Bou-Zeid, professor of civil and environmental engineering at Princeton and one of the event's organizers, speaks during his closing remarks at the symposium.

Much of the day was devoted to research presentations from participating schools. Among the speakers: Naveen Verma, of Princeton, on city-scale sensing; Thu Nguyen, of Rutgers, on edge computing in smart technology; Cristina Comaniciu, of Stevens, on models for smart grids; and Branislav Dimitrijevic, of NJIT, on shared mobility.

The symposium ended with a panel discussion of the mayors of Westfield, Plainfield, and Paterson, moderated by Beth Simone Noveck, New Jersey’s chief innovation officer. Noveck asked the panelists to consider what data they could provide to researchers to help develop solutions to their municipalities’ problems. The mayors underscored the importance of using engineering research to solve current problems — in effect, that building the cities of the future starts with today’s real-world issues. New Jersey cities are facing challenges related to education, infrastructure, traffic, parking, quality of life, and budgetary constraints. Often those needs vary greatly from town to town.

Shelley Brindle, the mayor of Westfield, said her town is working to broaden its economic base. The municipality is transforming its historic downtown but facing real difficulties with mobility and transportation, particularly for commuters.

“We have a major parking problem,” she said. “We have a four-year waitlist to park in our train lot.”

Andre Sayegh, the Paterson mayor, said his city is pursuing economic growth and trying to get homeowners and businesses more involved in the city. One immediate issue is dealing with abandoned properties as part of the process.

“We have to get a better handle on [this] so that developers can come in,” he said, adding that the city was seeking ways to “expedite the process as far as getting these properties back on the tax roll.”

Adrian Mapp, mayor of Plainfield, said the town is seeking to improve schools. “I’m sitting here in the halls of academia,” he said, “and I know solutions lie right here in this room.”

The conference was organized by Princeton’s Office of Corporate Engagement and Foundation Relations and the Metropolis Project, with support from Lyft.

SmartDriving Car Summit focuses on mobility for all