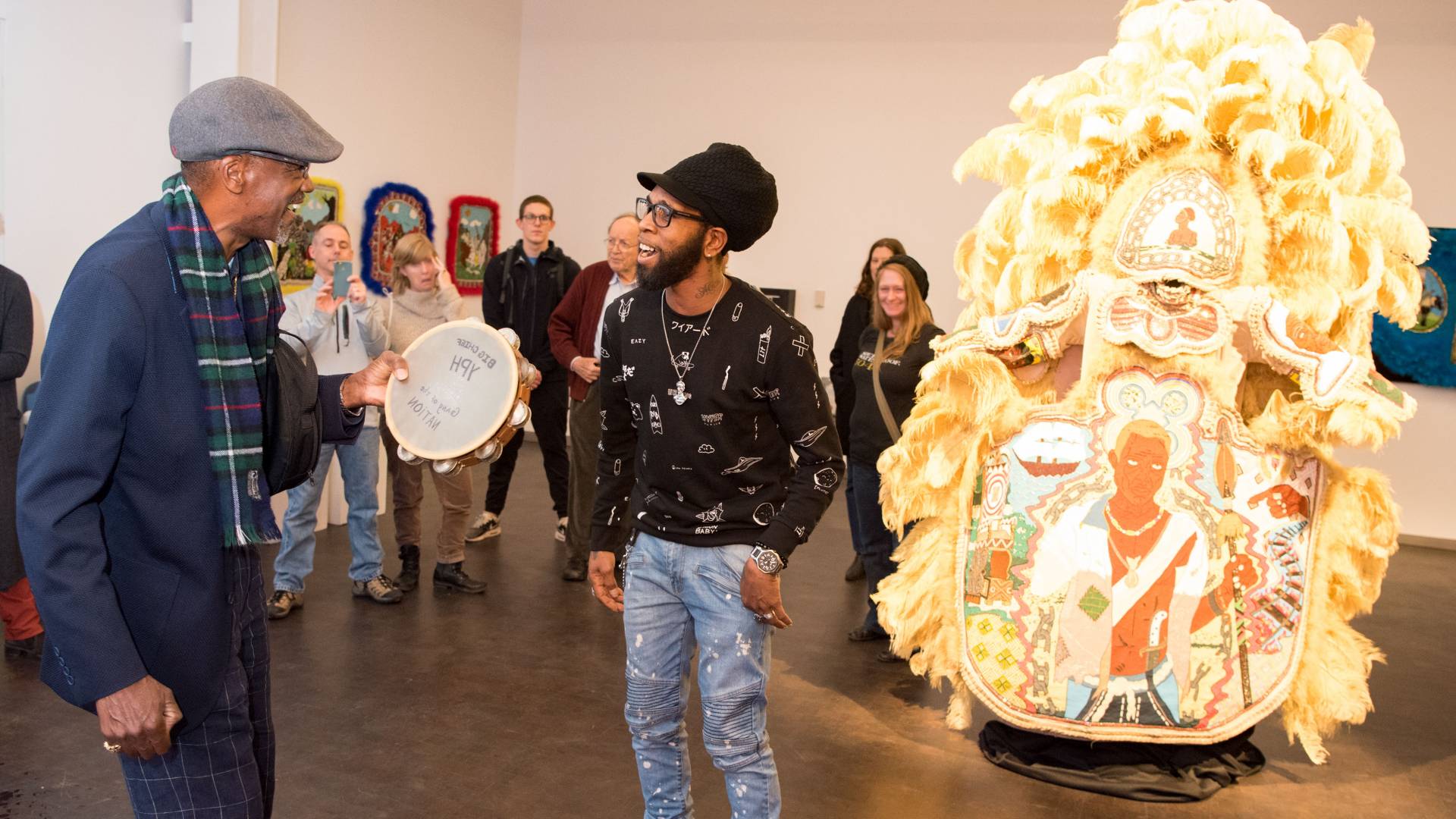 Big Chief Darryl Montana of the Yellow Pocahontas Hunters (left) and Big Chief Demond Melancon of the Young Seminole Hunters — two leaders of New Orleans' indigenous Black Indian groups — break into spontaneous song at an April 3 reception in the CoLab gallery space in the new Lewis Arts complex. The chiefs' visit to Princeton, in conjunction with an exhibition of the groups' elaborate ceremonial suits and other artwork, included a panel discussion and classroom visit. 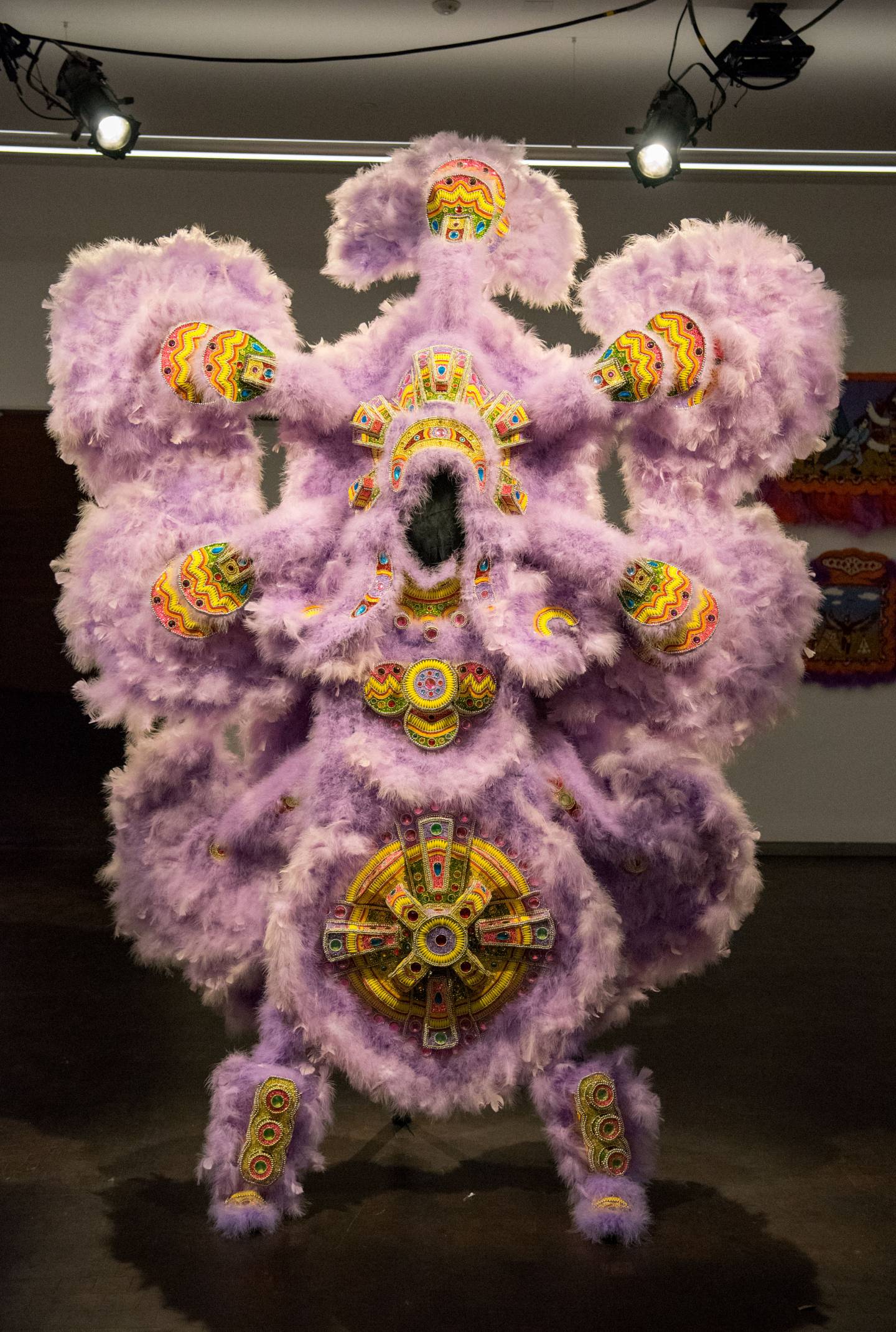 This purple feathered and beaded suit is one of more than 100 suits created by Big Chief Darryl Montana and his father, who taught his son to bead at age 6. A new suit is designed and constructed each year and is worn during Mardi Gras and other celebratory occasions.

Big Chief Demond Melancon of the Young Seminole Hunters and Big Chief Darryl Montana of the Yellow Pocahontas Hunters are leaders of two of these groups of Indians. Referred to as "tribes," the groups organize by neighborhood and perform, wearing these intricately beaded and decorated suits, during Mardi Gras and other celebratory occasions.

The discussion, facilitated by Joshua Guild, associate professor of history and African American studies, took place in the Forum of the new Lewis Arts complex, in conjunction with the exhibition "Big Chief Wears a Golden Crown: Art of the New Orleans Black Masking Indians," on view through April 7 in the CoLab gallery space adjacent to the Forum. The exhibition features two of the ceremonial suits created by the chiefs and other artwork.

During a reception preceding the panel discussion, the chiefs detailed the craftsmanship that goes into the suits, which weigh over 100 pounds and can take up to 5,000 hours to construct.

Standing in front of a bright yellow suit he created in 2016, Melancon explained that he and his wife, Alicia Winding, who was also at the reception, work for an entire year on each suit, which is only used for one year. The 2016 suit — made of intricate beadwork, rhinestones, feathers, marabou, fabric ruffles and other materials — tells the narrative of "Bras Coupé," or “one-armed bandit," a nickname drawn from the literal French translation “arm that is cut.” Bras Coupé was a famous cult hero to slaves of the South and lost an arm in 1834, when he was shot in a swamp by whites, who thought he was a runaway slave.

"Each year, we create a suit with a different narrative of African indigenous peoples and slavery," Melancon said. The suits depict actual and imagined events from African and American history and are worn on Mardi Gras, the "Super Sunday" Uptown and Downtown parades, and St. Joseph's Day on March 19.

In the gallery space, Montana and Melancon led the crowd in chanting — clapping, dancing and banging on a tambourine — to demonstrate the traditional song that is performed at the beginning and end of each parade. Several onlookers recorded the joyful dancing on their cellphones.

Montana said he learned beading at age of 6 at the side of his father, the late Allison "Tootie" Montana, also known as the Mardi Gras Chief of Chiefs. Together, they made more than 100 suits.

Putting his arm around Melancon's shoulder, Montana lauded the younger chief's artistry. "I've been watching Demond for 22 years," Montana told the crowd. "I call him the 'bead master' — I say that with love. I am so proud of him."

Montana explained that the tradition of "masking Indian" began generations ago in the late 1800s by the Montana family to change the culture during Carnival, or Mardi Gras. He said the competition among tribes used to be manifested in physical fighting but now, with dressing, "it is like fighting with a needle and thread, a real competition."

Montana announced to the crowd that he has invited Melancon to collaborate with him on a new suit, a melding of their artistry. "I want him to bead my sleeves," Montana said. "Then the city is his!" 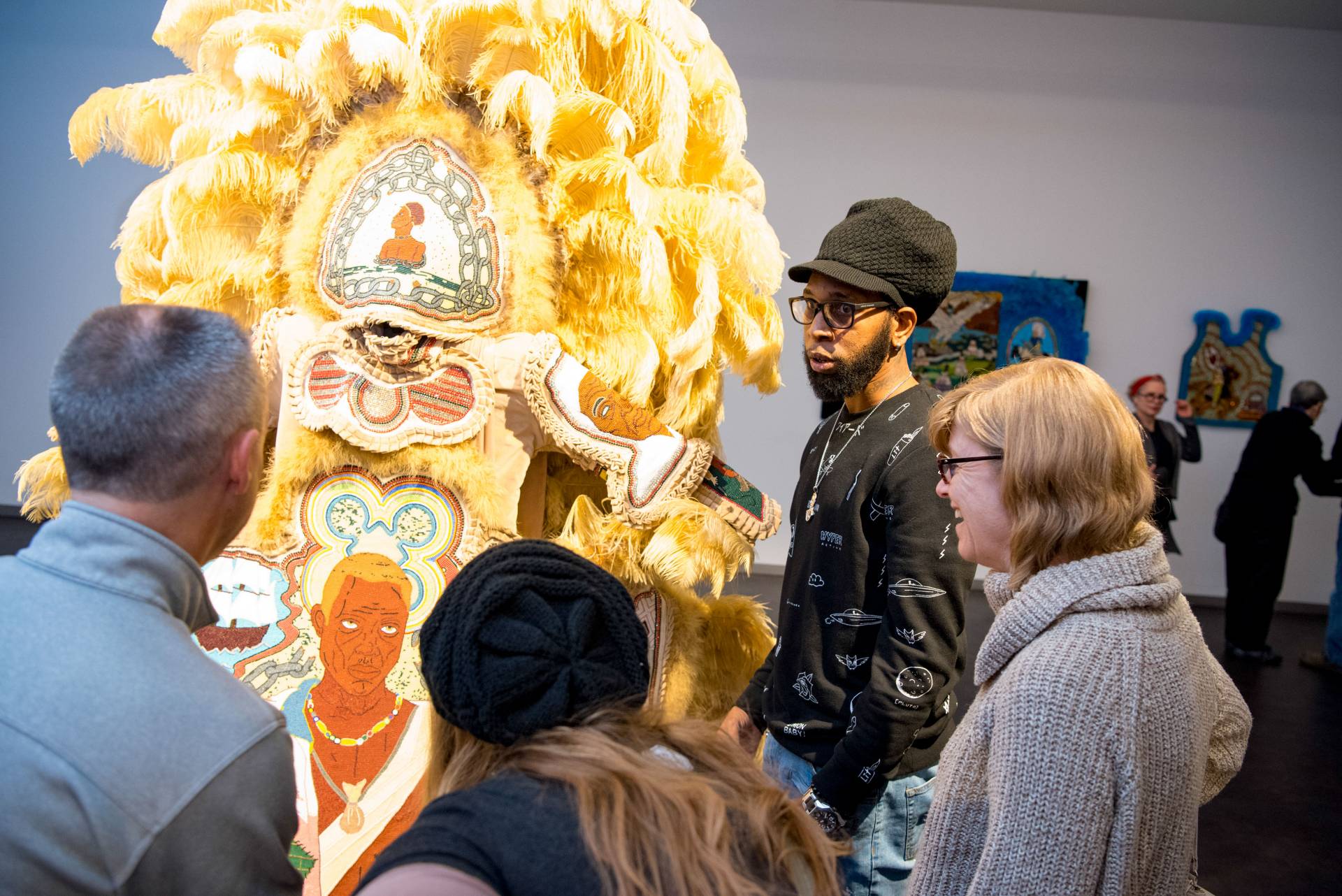 Big Chief Demond Melancon explains that each year the suit he creates focuses on a different narrative of African indigenous peoples and slavery. This 2016 suit explores the story of "Bras Coupé," or "one-armed bandit" — a nickname drawn from the literal French translation "arm that is cut" — a famous cult hero to slaves of the South.

The panel and exhibition — organized by Jeff Whetstone, professor of visual arts in the Lewis Center for the Arts, and co-sponsored by the Princeton Environmental Institute (PEI) — are connected to Whetstone’s spring course, “The Port of New Orleans: Culture and Climate Change.”

The class spent spring break in New Orleans visiting sites of artistic and scientific intervention, and students are creating models, media and other creative works in response to research data. In the classroom, visiting scholars and artists present examples of how cooperation between cultural and scientific communities can provide valuable, sustainable strategies. Montana and Melancon are visiting the class April 4. 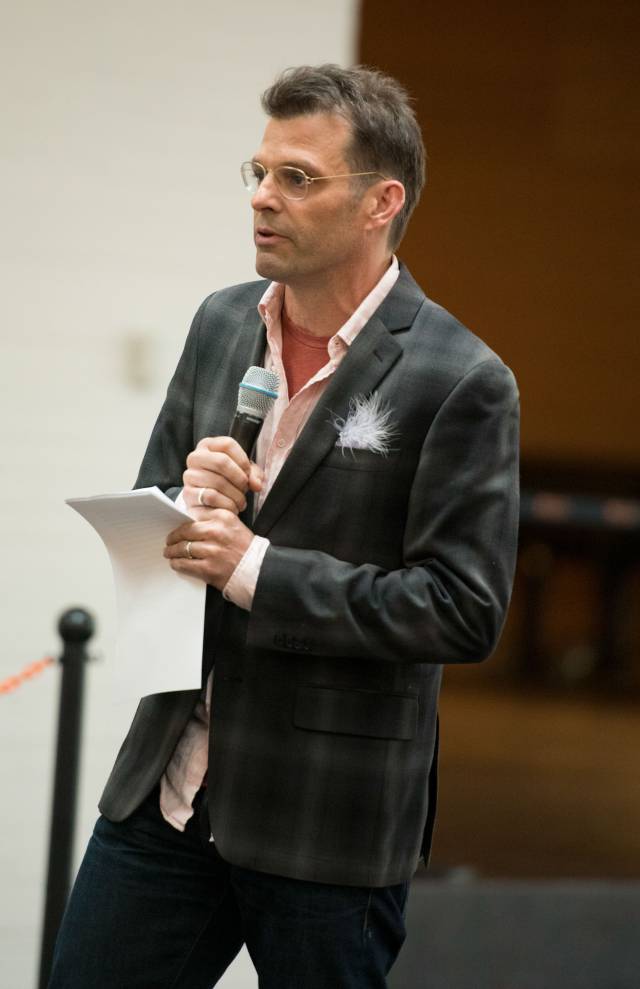 Jeff Whetstone, professor of visual arts in the Lewis Center for the Arts, introduces the panelists. Whetstone organized the panel and exhibition in conjunction with his spring course "The Port of New Orleans: Culture and Climate Change," which featured a spring break trip to New Orleans.

After the crowd moved into the Forum, Whetstone introduced the panelists, noting that New Orleans is decades ahead of any other U.S. city with respect to climate change.

"In this regard, it is a prophetic city. ... From the catastrophe of colonialism and slavery to the havoc wreaked by broken levees during Katrina, and the BP oil spill, the city still remains vibrant and resilient through it all — largely due to the strength and values fostered by the black communities of the city. Masking Indians have been reminding their neighborhoods for over 150 years that in the face of crisis, power and strength, resistance and resilience can be distilled from beauty."

He said the beauty of the art and performance of the Black Masking Indians of New Orleans "is the driving force that forms communities of strength."

Noting the unique artistic talents of Montana and Melancon, Guild said, "Princeton regularly hosts Pulitzer Prize winners and others. But there are no artists greater than these two."

Montana smiled at the compliment but then solemnly pointed to the sky: "There has to be a spiritual connection," he said.

Guild said that Montana has taught over 3,000 students and, as he nears retirement, is mentoring Melancon, a multidisciplinary contemporary artist and performer. "I don't want to take my art to the grave, that's why I want to teach Demond," Montana said.

Melancon said Montana "showed me the discipline of the culture, my coming into the Indian culture. When I do this, I channel Montana. My inspiration is always Montana."

Montana told the audience that the dressing tradition "is like an addiction, you can't stop. It's a beautiful thing, it brings community, family and friends together."

Melancon acknowledged the threads of community and spirituality woven into the tradition. "My wife and I have been together 14 years. I taught her how to sew. And now I've taught my 13-year-old nephew. I teach them the culture, about Rastafarians, about indigenous peoples. When we make a suit, it becomes a study.

“Without the togetherness of family, you just can't do it. I don't even feel right sewing by myself. This is a blessing, to have my wife and family, my support runs deep. This is a spiritual thing. When I look at the years, looking back from Katrina to now, the love from everywhere, it makes you work harder." 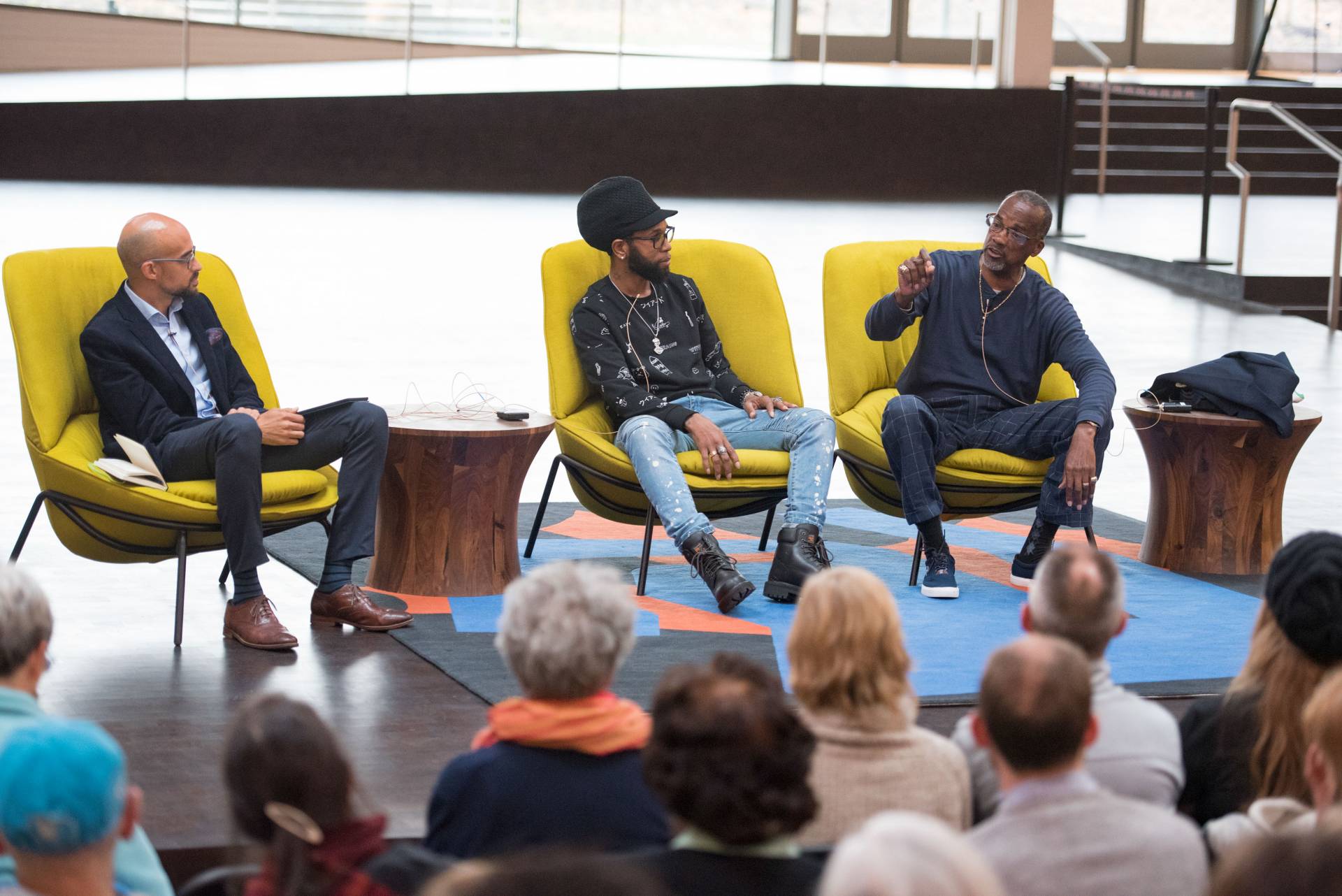 Joshua Guild, associate professor of history and African American studies (left), moderates the panel discussion with Big Chief Demond Melancon (center) and Big Chief Darryl Montana. Topics ranged from community and spirituality in the "dressing" tradition, to the passing down of artistry techniques from generation to generation.