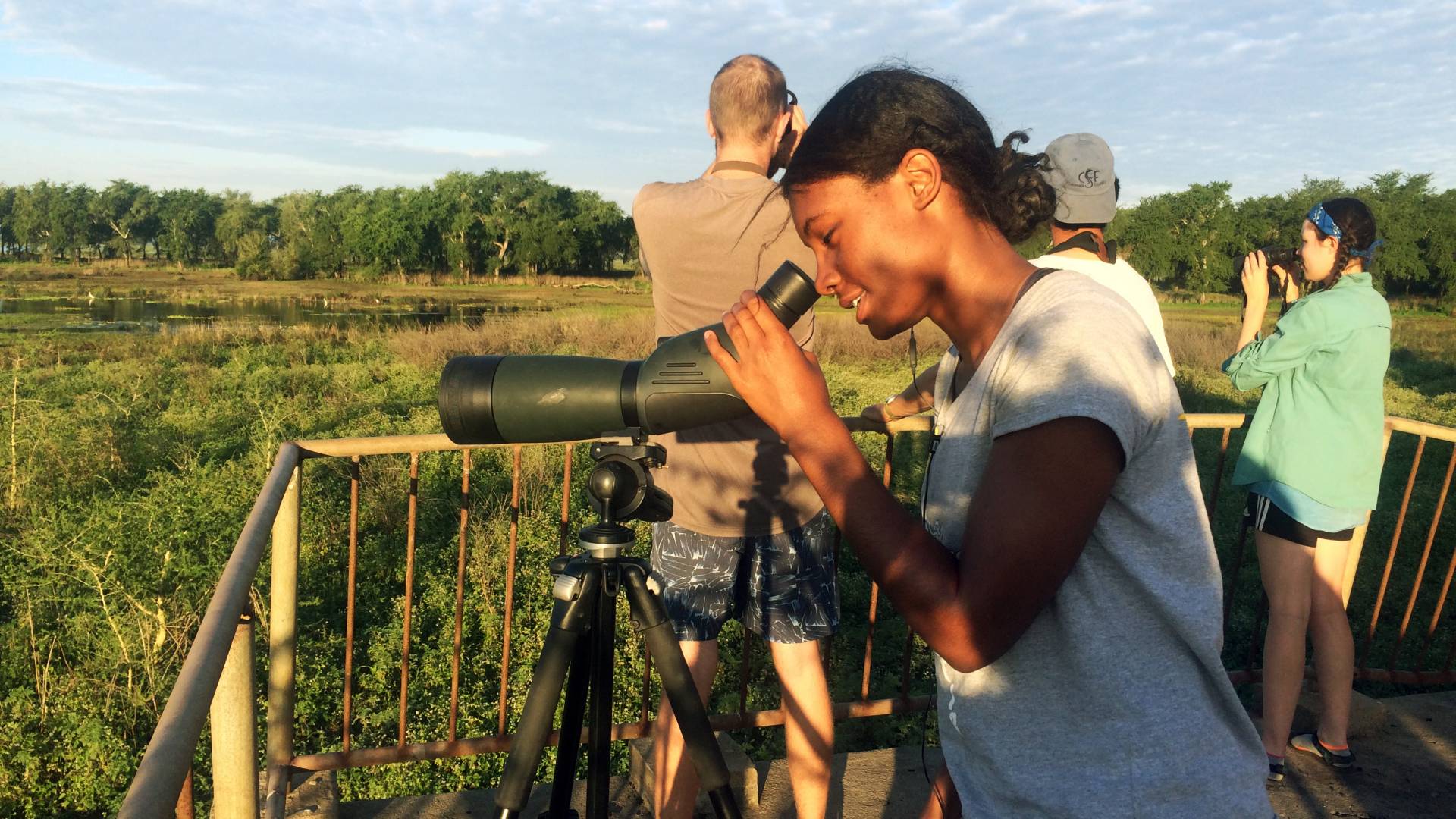 Princeton University senior Alana Reynolds, who will graduate on June 5 with a degree in ecology and evolutionary biology and a certificate in environmental studies, seeks to help the environment by resolving human-wildlife conflict. With support from the Princeton Environmental Institute, Reynolds traveled to Mozambique's Gorongosa National Park, shown here, in 2017 for her senior thesis research, which tested the effectiveness of various types of fences at preventing elephants in the park from raiding nearby farm crops.

When Princeton University senior Alana Reynolds arrived in Mozambique last June to conduct fieldwork for her thesis, she realized that she had to see elephants differently if she wanted to help protect them.

She had traveled to the southeast African country with support from the Becky Colvin Memorial Award presented annually by the Princeton Environmental Institute (PEI) and the Department of Ecology and Evolutionary Biology to construct and test the effectiveness of various types of fences that subsistence farmers on the border of the 1,500-square mile Gorongosa National Park could use to protect their crops from elephants.

Reynolds knew the project would be complicated. The materials for the fences had to be lightweight and low-maintenance, something that people in remote villages accessible only by river could transport and operate. She would have to use GPS data and local reports to position the fences at the specific points along the Pungwe River — often choked with towering thickets of razor-sharp grass — where elephants crossed out of the park. Yet, the fences still had to be sturdy or ingenious enough to stop elephants, animals that "just push trees over for fun," Reynolds said. 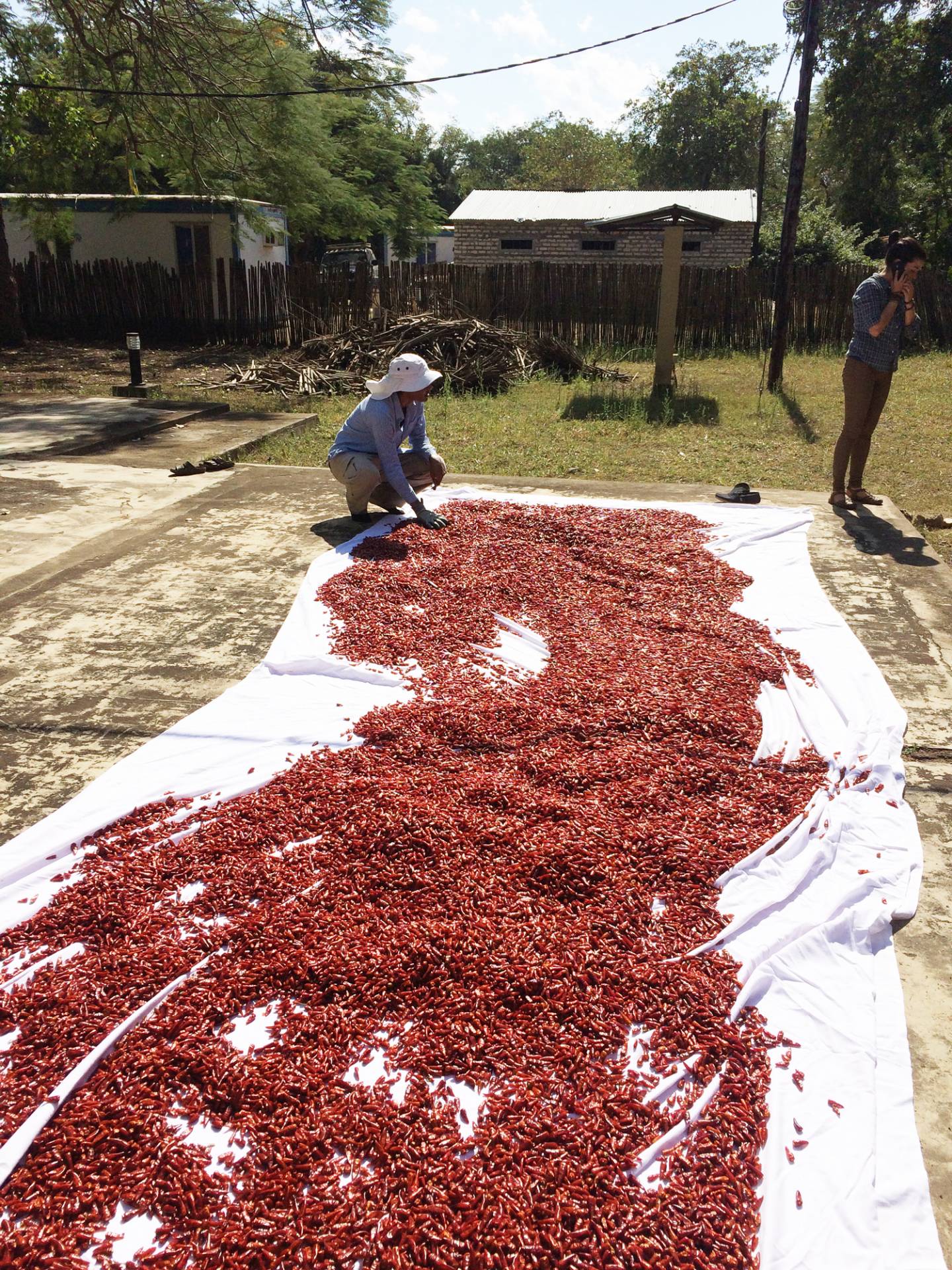 Reynolds tested fences that people living in remote communities along the Pungwe River that marks the border of Gorongosa could easily construct and maintain. Here, she is drying chili peppers that will then be ground and mixed with engine oil to construct a locally popular barrier known as a chili-grease fence. Elephants, which raid farms around Gorongosa around 1,000 times per year, can destroy an entire crop in a single night.

She had been prepared for the trials of fieldwork by experienced researchers such as her adviser Rob Pringle, assistant professor of ecology and evolutionary biology. But for her project to truly be successful, Reynolds also needed to approach it from the mindset of the farmers around Gorongosa whose crops are raided by elephants roughly 1,000 times per year.

"These animals, while beautiful to us, can be a real source of pain and loss to other people," said Reynolds, who will graduate June 5 with a degree in ecology and evolutionary biology and a certificate in environmental studies.

"For me as a researcher whose livelihood has not ever been threatened by a lion or an elephant, it's difficult to understand the animosity or the desire to poison or shoot them," she said. "In the United States, rarely are the outcomes of human-wildlife conflict death or devastation. In Africa, that can very much be the outcome."

Like her thesis project, Reynolds' lifelong passion for the environment is rooted in the desire to help resolve human-wildlife conflict. "If you take all the environmental issues I've ever worked on and strip them down to their foundations, they're all about perceived human conflict and preserving ecosystems in their natural state," she said.

Reynolds believes that defending nature means helping people improve their interactions with it, she said. "These situations are a human issue more than an environmental issue," she said. "You have to think of it from the perspective of the person you're trying to help. If you want to advance conservation, it needs to come from a place of understanding where people's anger comes from, which isn't from hating nature. It comes from a human desire to have lives free from pain and loss."

"When you start talking about ranching or farming, it's not seen as reasonable that you should have to deal with wild animals whose environments you are very much a part of," she said. "We have these concepts of acceptable risk, but for some reason we do not include wildlife in that concept. The thinking is that it's not reasonable to have to deal with wolves when raising cattle in and around natural environments. "

Gorongosa was the ideal place for Reynolds to put her ethic into action, said Pringle, whose lab regularly works in and around the park. Conflicts between elephants and the communities surrounding Gorongosa are increasing as the animals' population rebounds after decades of poaching, he said.

"A single herd can eat all of a farmer's corn, and next year's seed corn, in one night — that's the agrarian-smallholder equivalent of losing one's job and having one's bank account deleted," Pringle said. "Alana really threw herself into this problem. She read all the existing literature and thinking about potential solutions. There were a lot of challenges and delays — sticky negotiations, logistical hurdles. I was really impressed with her perseverance and adaptability."

Reynolds tested the performance of three kinds of barriers placed at elephant-crossing points: ropes coated in chili paste and engine grease (currently the most common method); rows of beehives suspended with ropes between fence posts; and a combination of beehives and chili-coated ropes.

She found that due to elephants' natural fear of bees, the beehive fences were the most effective. (Gorongosa supports a local beekeeping program that would make maintenance of the hives — as well as extraction of the valuable honey — feasible, Reynolds said.) 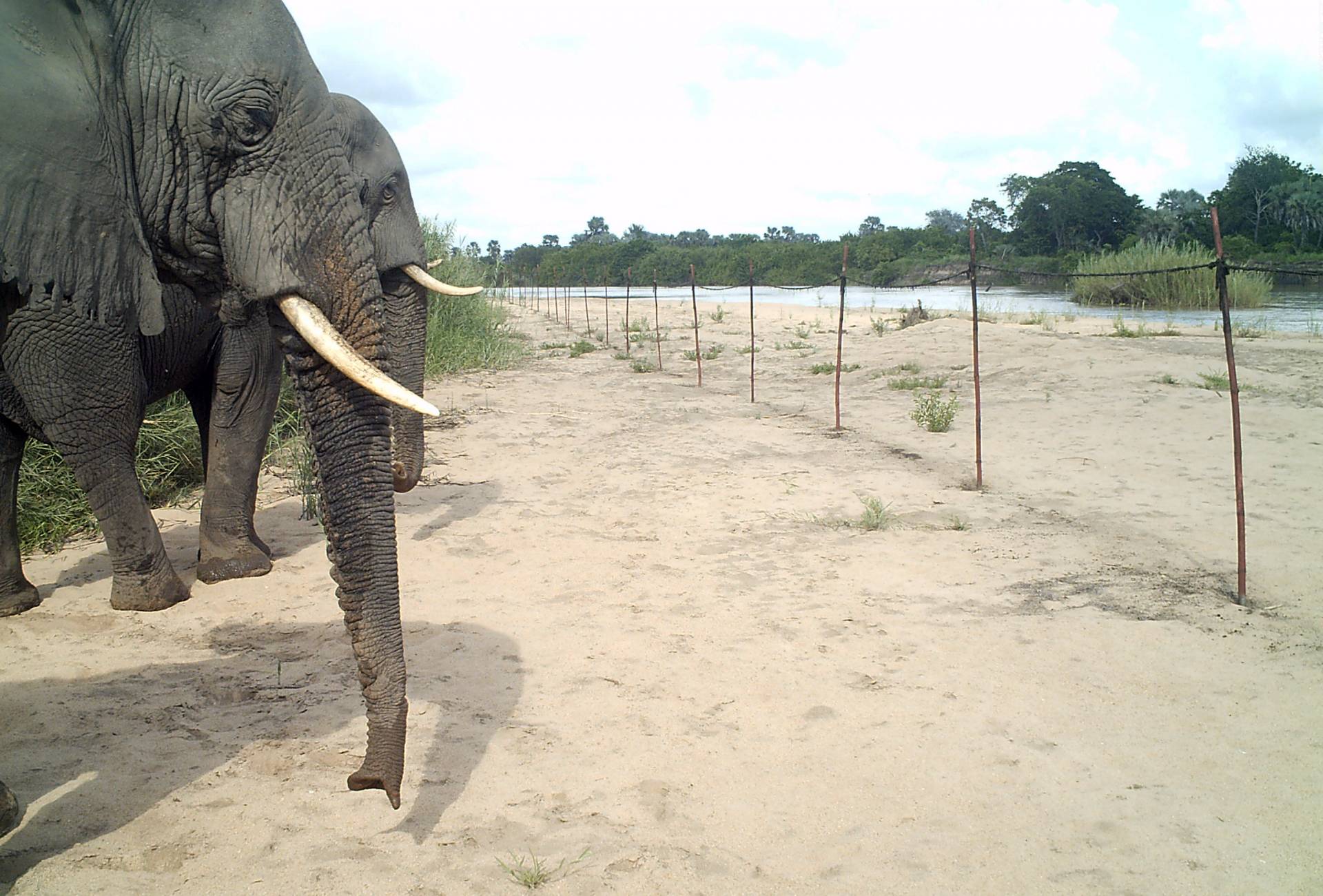 This camera log shows elephants approaching a chili-grease fence at a crossing point along the Pungwe River. Reynolds found that the most effective fence consists of beehives suspended with ropes between posts because of elephants' natural fear of bees. Through Gorongosa's beekeeping program, locals also can use the hives to produce and sell honey.

Reynolds also looked for predictive patterns of crop raids using reports taken from August 2016 through December 2017 by trained, paid locals known as enumerators. After witnessing or being alerted to a raid, the enumerators would record numerous details, including the GPS location, date and time of the raid, and the sex of the elephant responsible. Reynolds was able to determine the most common time of day (night), time of year (dry season), and sex of the raiding elephant (male).

"Resolving human-wildlife conflicts is emerging as one of the most important components of securing a positive relationship between national parks and surrounding communities, and in that respect, Alana's research was a great contribution," Pringle said.

Reynolds also helped collect elephant fecal samples for a project in the Pringle lab to identify why elephants raid crops by identifying the concentration of specific plants in their droppings, Pringle said. With the data Reynolds helped compile, the lab discovered that, much like candy to a child, corn provides elephants with little protein but a huge energy boost.

Reynolds did not live the naturalist’s life growing up outside of Chicago in Carol Stream, Illinois. Yet, she felt drawn to studying and protecting the environment. "I've never wanted to do anything else other than work in environmental science or on environmental issues for as long as I can remember," she said. "I think the environment is intrinsically beautiful and when people think something is beautiful they want to protect it."

Although not environmentalists, her parents were "fair-minded people" who taught her the power of reason, facts and understanding, Reynolds said: "Sometimes it's not that people don't care, it's that they don't know." As an intern at Chicago's Shedd Aquarium in high school, she traveled with researchers to the Bahamas to study the effect of resort development on mangroves. Even then, she could see that people would put their own interests above the environment unless they could be convinced that both could benefit.

After graduation, Reynolds will head to San Francisco where she'll work as a legal assistant for two years. Her plan is to explore environmental law where she can translate her scientific background and experiences at Princeton into laws and regulations that actively protect the environment.

"Princeton didn't give me these ideals because I came here with them," Reynolds said. "But Princeton gave me the tools and put me in contact with people who were taking on these issues long before I even knew what they were — and doing it well."