Princeton graduate student Xiyue Wang, shown here with his wife and their young son before he was detained in Iran in 2016.

The United Nations Working Group on Arbitrary Detention has concluded that the government of Iran had “no legal basis for the arrest and detention” of imprisoned Princeton University graduate student Xiyue Wang, that Iran committed “multiple violations” of his right to a fair trial, that his “deprivation of liberty is arbitrary,” and that he should be released “immediately.”

The Working Group made these findings in an opinion (Number 52/2018) adopted on August 23, in response to a petition filed earlier this year by Wang’s wife, Hua Qu, and his mother.

“The Working Group requests the Government of the Islamic Republic of Iran to take the steps necessary to remedy the situation of Mr. Wang without delay and bring it into conformity with the relevant international norms…. [T]he appropriate remedy would be to release Mr. Wang immediately,” the report said.

Wang is a graduate student in the Department of History at Princeton University. A naturalized U.S. citizen, he was in Iran in 2016 to study Farsi and conduct scholarly research for his doctoral dissertation. He had been reviewing documents dating from the late 19th and early 20th centuries in Iran’s National Archives.  He was arrested in August 2016 and confined to Evin Prison in Tehran. He was convicted in a non-public trial on two counts of espionage and sentenced to 10 years in prison.

“Xiyue Wang has been unjustly imprisoned and separated from his wife and young child for more than two years,” said Princeton Vice President and Secretary Robert K. Durkee. “The Working Group makes it clear that Wang was in Iran solely to do scholarly work, and that the charges against him were entirely without merit.  We hope these findings by the Working Group and its call for his immediate release will, in fact, expedite his release so he can return to his family and come back to campus to complete his Ph.D.”

The Working Group found that Wang was peacefully exercising his right to seek and receive information for academic purposes in the form of historical records held by a public body; that Iran’s espionage laws are vague and overly broad; that no trial of Wang should have taken place; that the Revolutionary Courts that tried Wang and heard his appeal “do not meet the standards of an impartial and independent tribunal;” and that Wang’s case is part of a practice of Iran targeting foreign nationals for detention.

The Working Group obtained a response to the petition from the government of Iran. In that response, “the government did not explain … how Mr. Wang had cooperated with a foreign state … against the Islamic Republic of Iran, nor how accessing historical archives relating to a period of governance over 100 years ago could amount to an attempt to overthrow the Iranian Government,” the Working Group said in its opinion.  The Working Group also said that Iran “did not explain how Mr. Wang’s trial on espionage charges posed a national security threat so serious that it warranted a closed hearing.” 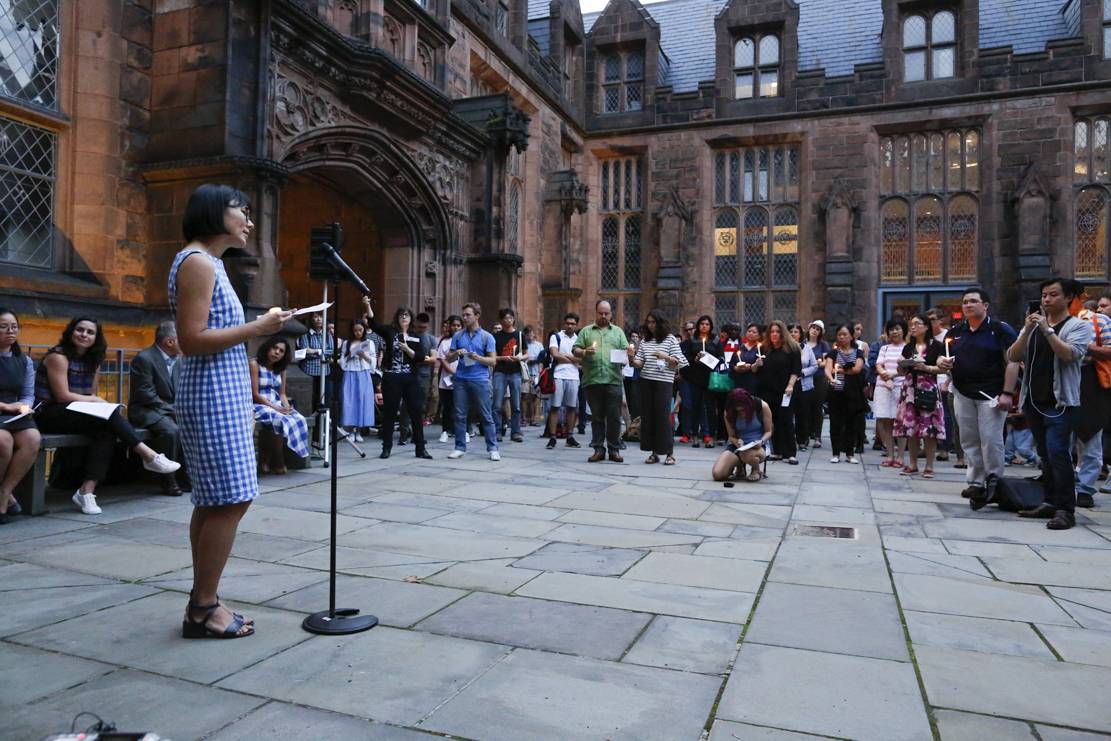 Hua Qu, the wife of graduate student Xiyue Wang, speaks at a vigil on the Princeton campus, Sept. 15, 2017, on behalf of her husband, who is imprisoned in Iran.

The Working Group said “there are several facts that lead the Working Group to conclude that Mr. Wang’s detention was motivated by the fact that he is a United States citizen. First, there is no evidence that Mr. Wang was present in Iran for any reason other than to pursue his dissertation research. Indeed, prior to his arrest, he had visited Iran … without incident, and had informed the authorities of the purpose of his research.” It added, “Mr. Wang’s sentence of 10 years’ imprisonment appears to be disproportionately heavy, as there is no evidence that … he was intending to, or did in fact, conduct espionage or cause ethnic crisis in Iran.”

The Working Group expressed grave concerns about the conditions in which Wang has been held and about his health.  In calling for his release, the Working Group recommends that he be “urgently transferred to a hospital” and that he be accorded a right of “compensation and other reparations, in accordance with international law.”

The Working Group on Arbitrary Detention was established in 1991 by the former Commission on Human Rights to investigate cases of deprivation of liberty imposed arbitrarily or otherwise inconsistently with international standards and rights. It receives petitions from or on behalf of prisoners around the world and issues opinions as to whether they have been imprisoned in violation of national or international law.

Hua Qu, the wife of Xiyue Wang, also issued a statement in response to the UN Working Group's report.