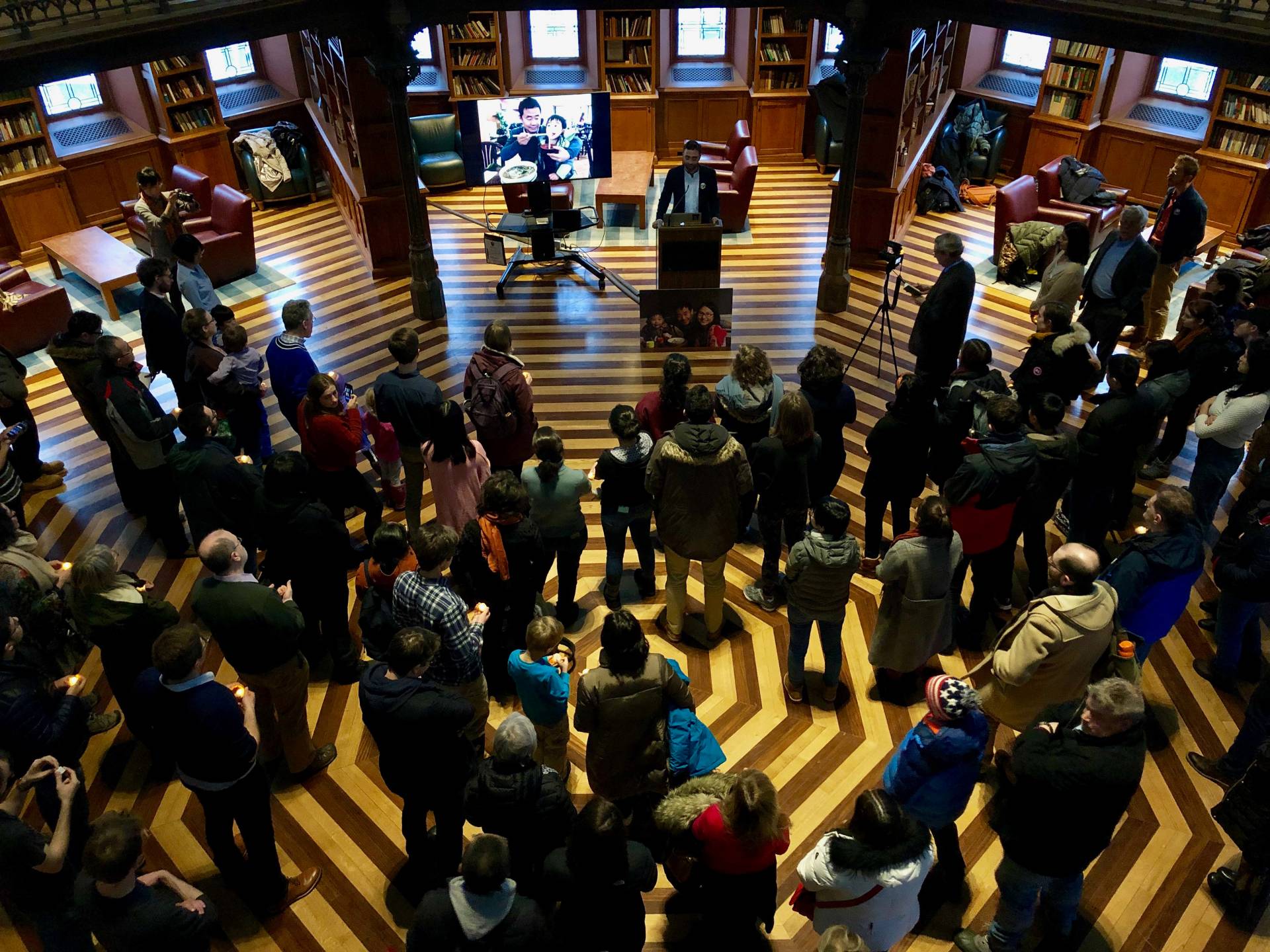 About 150 people gathered at Chancellor Green for a rally in support of Xiyue Wang, a Princeton graduate student in history who was detained in Iran in 2016 while doing dissertation research and is serving a 10-year sentence at Evin Prison in Tehran. Speakers proclaimed his innocence and decried his imprisonment.

A call-a-thon and a campus rally organized by graduate students brought renewed attention Wednesday, Feb. 20, to the plight of Xiyue Wang, a Princeton University graduate student imprisoned in Iran for nearly three years.

“On this Day of Action, every phone call made, every message emailed on Wang’s behalf, every person present in this room reaffirms the resolute spirit of this community to continue to work for his safe release,” said Sarah-Jane Leslie, dean of the Graduate School. 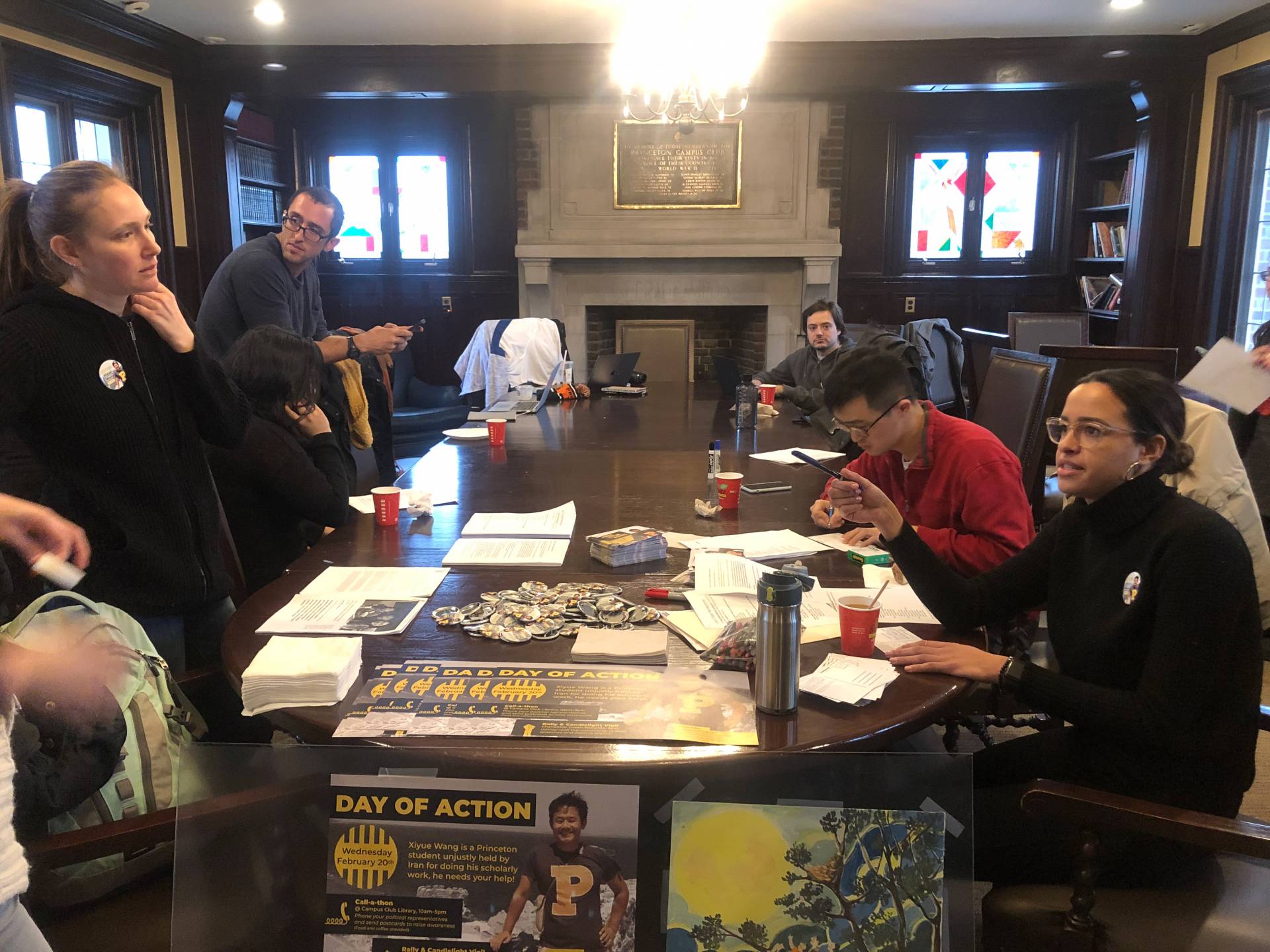 In the Campus Club library, graduate students and others spent the "Day of Action" making phone calls, writing postcards and discussing strategy on how to support Wang and bring him home.

Earlier, students, faculty and staff gathered at Campus Club to send emails and postcards and to call the offices of members of Congress, urging them to work to secure Wang’s freedom.

The day’s events were directed by a new organization of graduate students, the Free Xiyue Wang Working Group. In solidarity with the Princeton group, graduate students at Yale University on Wednesday set up information stations on the case and encouraged people to contact members of Congress on Wang’s behalf. A similar effort is planned at the University of Washington.

Wang was detained by Iranian authorities in the summer of 2016 while studying the Farsi language and doing dissertation research on the history of the Qajar dynasty, which ruled from the late 18th to the early 20th century. Wang was charged with espionage, convicted and sentenced to 10 years in prison. 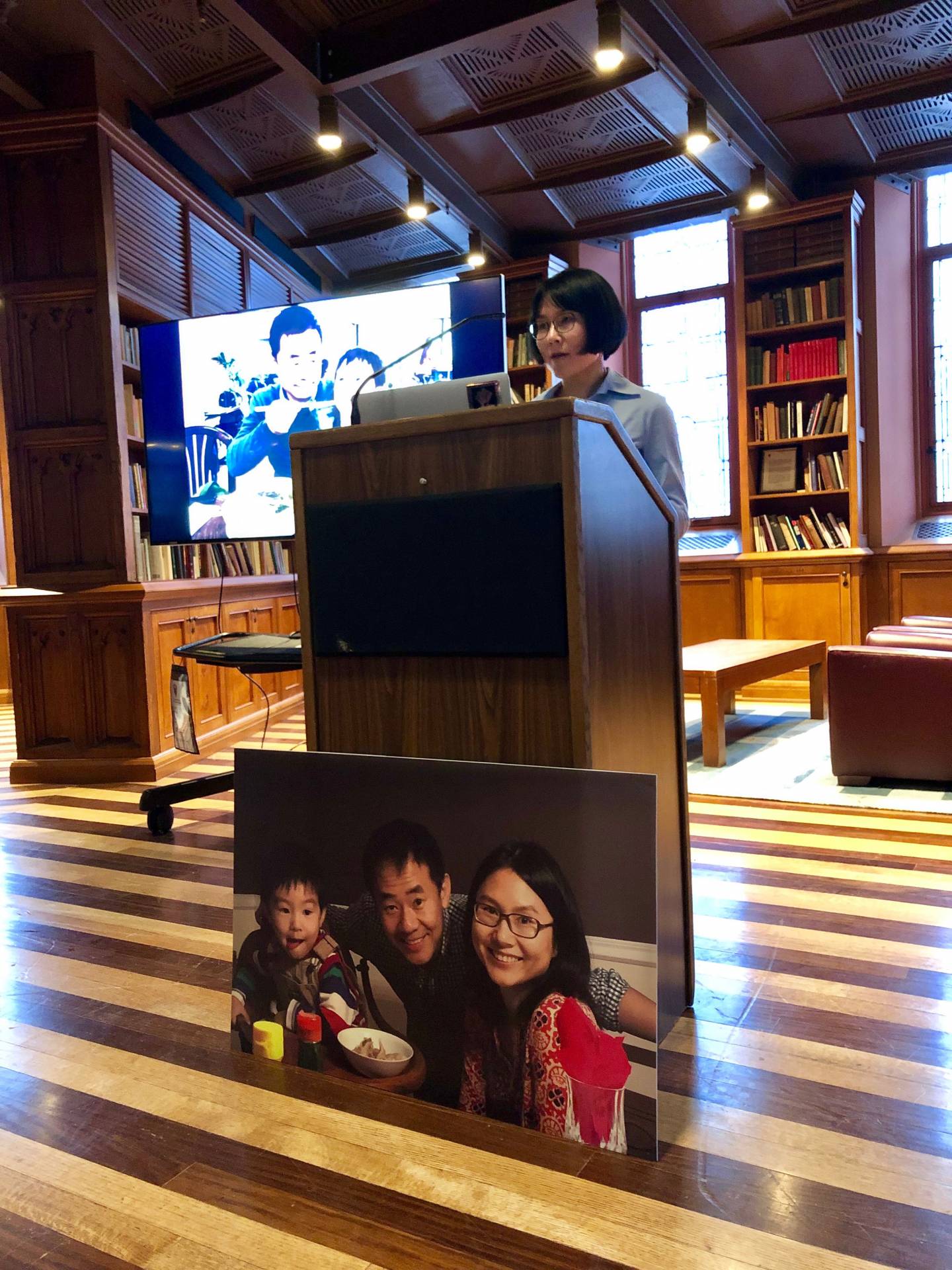 Hua Qu, the wife of Xiyue Wang, was one of several speakers at a campus rally for him Feb. 20, 2019. She discussed how difficult life has been since her husband was detained and appealed for his release from prison.

The University has protested the arbitrary and unjust arrest and conviction, including on Wang’s 38th birthday on Dec. 31. Academic and scholarly organizations around the world have also protested, and the United Nations Working Group on Arbitrary Detention last fall called for Wang’s immediate release after determining the case against him was without legal basis.

“We have to do our best to keep his spirit alive on this campus, and in the hearts and minds of Americans, as one of us: a student and an American citizen,” McGovern said.

Wang’s wife, Hua Qu, said her daily life has been like a roller coaster since her husband was detained. She noted that their son has now spent half his life without the presence of his father.

“I plead for the gates of mercy to be open,” she said.

“Every flicker of every candle in this room,” Leslie said, “represents another moment in which Wang is deprived ofhis rightful presence among his family, his colleagues and his friends here at Princeton, and in which we are deprived of his presence in our lives.

“May the light and warmth we generate this evening remind the world of his unjust plight. And may this Day of Action lead to his swift release from prison and, upon his safe return home, a Day — indeed many days — of Rejoicing.”