The experts’ statement follows a call last summer by the UN Working Group on Arbitrary Detention that Wang be immediately released because the government of Iran had no legal basis for his arrest in 2016. Iran committed “multiple violations” of his right to a fair trial and arbitrarily deprived him of his freedom, the Working Group report said.

“Iranian authorities’ use of espionage charges against Mr. Wang simply for having sought access to century-old historical documents reaches the level of absurdity,” said the UN experts. They are David Kaye, special rapporteur on the promotion and protection of the right to freedom of opinion and expression; Javaid Rehman, special rapporteur on the situation of human rights in the Islamic Republic of Iran; and José Antonio Guevara Bermúdez, chair-rapporteur of the Working Group on Arbitrary Detention.

That Wang was tried behind closed doors “only exacerbates our concerns around this case,” the experts said in a statement released May 7. 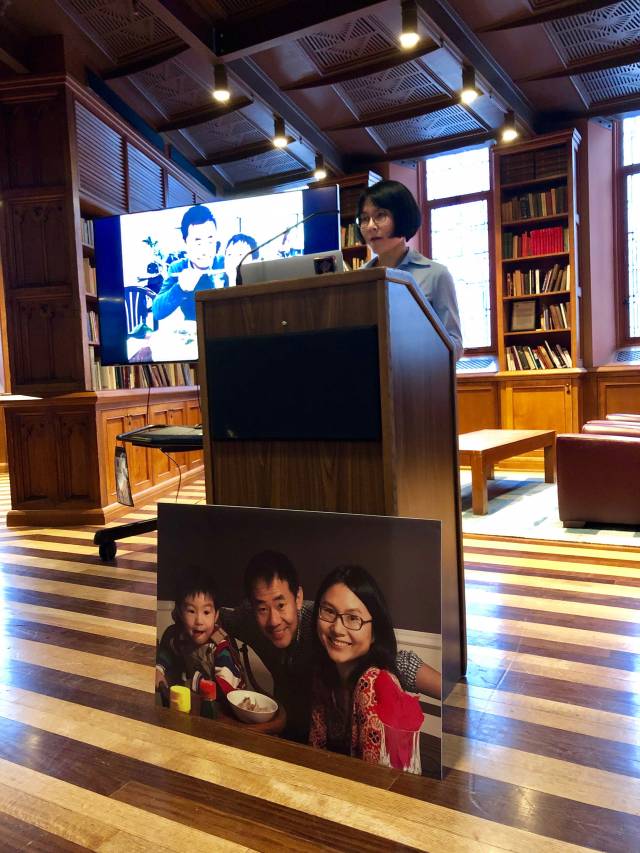 Hua Qu, the wife of Xiyue Wang, was one of several speakers at a campus rally for him Feb. 20, 2019. She discussed how difficult life has been since her husband was detained and appealed for his release from prison.

Wang is a graduate student in the Department of History at Princeton. A naturalized U.S. citizen who was born in China, he went to Iran to study the Farsi language and conduct scholarly research for his doctoral dissertation. He was reviewing documents on the Qajar dynasty dating from the late 19th and early 20th centuries when he was detained. He was sentenced to 10 years in prison.

Last week, after Iran freed Nizar Zakka, a Lebanese citizen and permanent U.S. resident who had also been sentenced to a decade in prison for alleged espionage, the dean of Princeton’s Graduate School issued a renewed call for Wang’s release. “That Xiyue remains imprisoned is a continuing heartache for him, for his wife and their young son, and for all of us in the Princeton community,” Sarah-Jane Leslie said.

The UN experts said they are “deeply concerned about Mr. Wang’s deteriorated health situation and at the allegations of ill-treatment and placement in overcrowded and unhygienic cells.” Wang has been denied access to specialized medical treatment outside the prison despite multiple requests, they said, noting that many other dual or foreign nationals arbitrarily detained in Iran have also been denied appropriate health care.

“We deeply regret that individuals, such as Mr. Wang, who choose to pursue research and academic work are punished for their contribution to society. We urge the authorities to ensure his immediate release and to take serious steps towards protecting and recognizing these rights,” Kaye, Rehman and Guevara Bermúdez said.