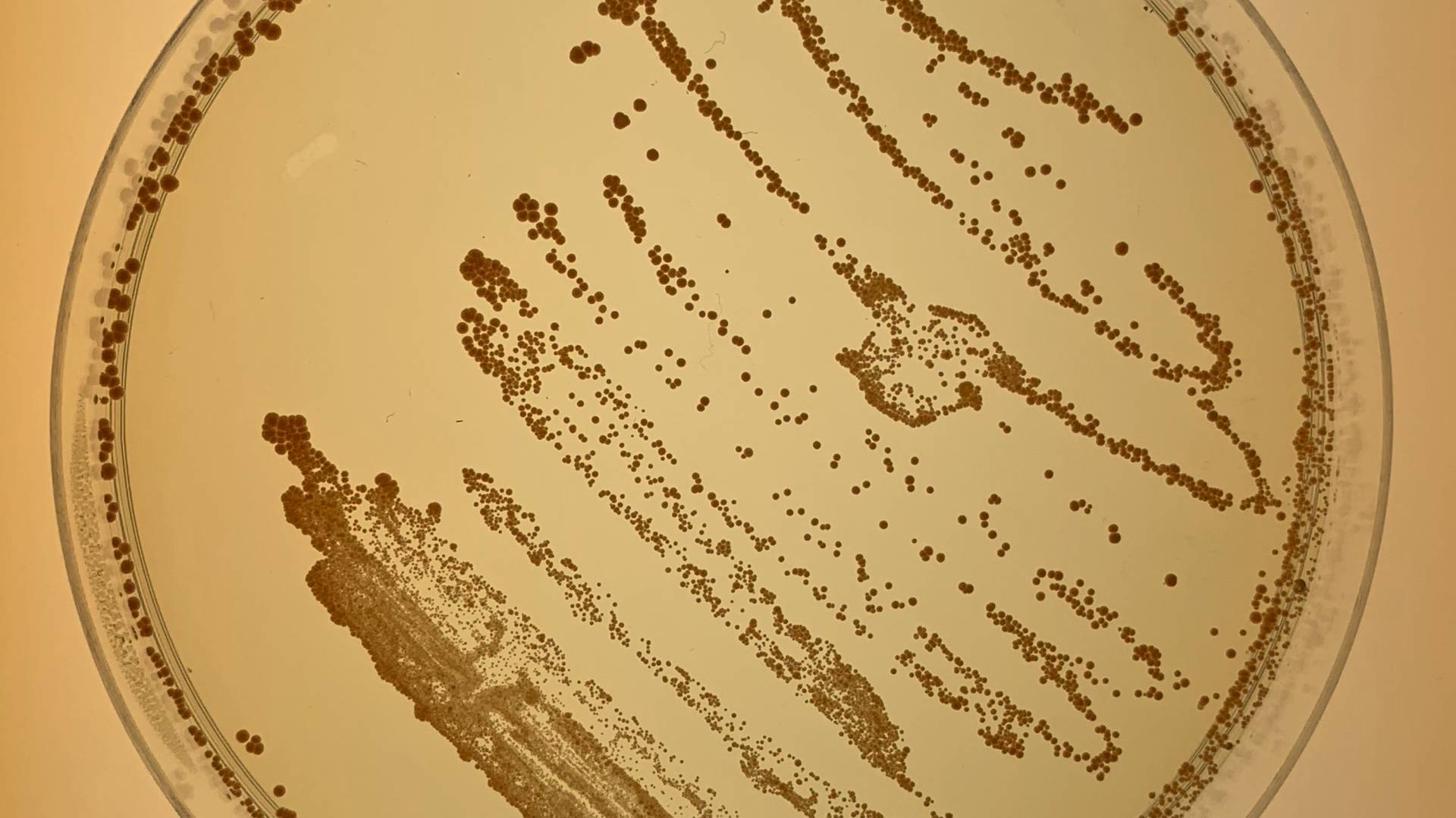 The School of Engineering and Applied Science has created a program to fund small, cross-disciplinary groups of researchers called Focused Research Teams. One of those faculty teams will look for new generations of antibiotics, in part by studying protective chemicals that populations of helpful bacteria, such as the ones pictured here, produce to ward of harmful invaders.

Image courtesy of the Link Lab

In an initiative to boost collaborations on subjects too new to fit into existing departments and centers, the School of Engineering and Applied Science has created a program to fund small, cross-disciplinary groups of researchers called Focused Research Teams.

The school has named three initial teams, two in emerging areas of biotechnology and one in robotics and "cyber-physical" systems. Each will receive $250,000 per year for three years, after which they will be evaluated to determine whether the initiative should continue, evolve into a larger effort or conclude.

"The pace of discovery and level of creativity among our faculty is astonishing," said Emily Carter, dean of engineering. "And much of this work happens when people from different disciplines begin working together and inspiring each other. In our recent strategic planning process, we identified the need to incubate and accelerate the most exciting new areas so we can more quickly bring their benefits to society.

"I was very impressed with the quality of proposals we received and am thrilled to establish these first three teams," said Carter, the Gerhard Andlinger Professor of Energy and the Environment.

The inaugural Focused Research Teams are:

In their proposal, this team notes that antibiotics are a pillar of modern medicine but face two major problems: the increasing ability of dangerous bacteria to resist even the most powerful antibiotics and the tendency for most antibiotics to wipe out helpful as well as harmful bacteria. The team of three faculty members seeks to combat both problems by developing a new generation of antibiotics that target specific bacteria much more precisely than conventional antibiotics.

The principal researchers of the team are A. James Link, professor of chemical and biological engineering; Mark Brynildsen, associate professor of chemical and biological engineering; and Mohamed Donia, assistant professor of molecular biology. The group proposes two main approaches to identifying precision-targeted antibiotic compounds. First, they will look at chemical compounds already produced by the human microbiome — the array of beneficial bacteria that inhabit the body and aid with digestion and other functions. These helpful bacteria produce chemicals that fend off unwelcome additions to the bacterial community. The team would look to these defensive chemicals as candidates for targeting harmful invaders while leaving beneficial bacteria alone.

A second approach will be to focus on processes that harmful bacteria use to cause their toxic effects, but which are not necessary for the bacteria to live. For example, the bacteria that cause common staph infections produce a pigment that neutralizes chemicals produced by human immune cells, thus helping the staph bacteria evade destruction. A drug that attacked this protective pigment might weaken staph bacteria enough to render it harmless but not enough to force it to develop resistance to antibiotics. The researchers also will combine the two approaches, looking for antivirulence compounds in the natural biome.

"The increase in antibiotic resistance in bacteria is one of the major health challenges in the 21st century," said Link. "At the same time, there is an increased appreciation that nearly all of the bacteria that live on us, our microbiome, are harmless or even beneficial. Each of us on this focused research team has different but overlapping approaches to addressing this challenge. With this generous award from the School of Engineering, we can consolidate our efforts and collaborate to make a major impact in the antibiotics field."

The work of this team will be supported by a fund established by Helen Shipley Hunt, who earned a master's degree in mathematics from Princeton in 1971.

Just as organs are parts of the body that perform special-purpose roles, organelles are units within cells that also perform essential functions — and in both cases, problems with these components are responsible for major diseases. A team of Princeton researchers from three departments is working to understand how sub-cellular organelles develop and how to engineer them to correct problems or create new functions. Doing so could have uses from treating disease to producing biofuels.

The team plans to build on a tide of recent discoveries and new tools at Princeton that are revealing surprising insights into how organelles form and how they might be manipulated. For example, the team has pioneered a new understanding of membrane-less organelles — structures that are not bound by a wall but rather are self-assembled clusters of molecules floating freely in the liquid inside of cells. Faults with such structures are thought to be associated with various disorders, including amyotrophic lateral sclerosis or Lou Gehrig's disease. Brangwynne was recently recognized for his work in this area with two major honors: selection as a 2018 MacArthur Fellow, and a seven-year appointment as a Howard Hughes Medical Investigator, one of the highest honors in the life sciences.

Along with these fundamental insights, the team seeks to apply the emerging field of optogenetics, the ability to control the behavior of genes using light. Several of the team members recently introduced a series of laboratory and computational methods for using light to control the formation of membrane-less organelles. In another example, Avalos and colleagues recently used light to control the metabolism of yeast cells, rewiring cells to produce a valuable fuel that normally would kill the cells.

Moving forward requires a combination of cell biology, engineering techniques, physics and materials science, said Brangwynne. "I am quite convinced this is a field we should create, and we should set up Princeton as the premier place where this can happen," he said.

The work of this team will be supported by a fund established by Lydia and William Addy. William Addy earned a bachelor's degree in chemical engineering from Princeton in 1982.

Robotic systems have advanced dramatically in recent years, including the budding use of self-driving cars. However, large gaps remain in efforts to make widespread use of robots that work alongside humans or in distributed, interconnected groups. The team of four faculty members in three departments is seeking to fill those gaps by bringing an array of expertise to bear on a particular challenge: creating a collaborative team of robots that collect trash. The team said this task embodies many of the challenges faced by robotic systems today, including the need for each robot to sense, manipulate and navigate its environment, and for the group as a whole to coordinate and allocate its resources to achieve the task as efficiently as possible.

By focusing on the trash collection project, the team expects to establish a hub for further research and collaboration. "These capabilities and associated challenges are very broadly relevant across robotics — and not tied to the specifics of the trash collection task," said Majumdar.

The work goes beyond conventional robotics to the emerging field of cyber-physical systems, which refers to distributed arrays of automated devices or systems, often connected or coordinated over a network, such as the internet.

"For example, teams of small mobile robots could provide critical support for search-and-rescue operations after an earthquake or flood; they could deliver critical medicines to people in remote or dangerous regions of the world; they could monitor changes to our environment by tracking plant and animal populations over time," the researchers wrote.

In addition to technological advances, the team wants the effort to help address societal questions surrounding deployment of robots in social environments and their impacts within underserved communities.

“Overall, we feel that this project has the potential to have real impact on some of the grand challenges in robotics by bringing together a diverse range of expertise, initiating new collaborations across campus, strengthening existing ones, and engaging students and postdocs,” said Majumdar.

The work of this team will by supported by the Addy Fund.