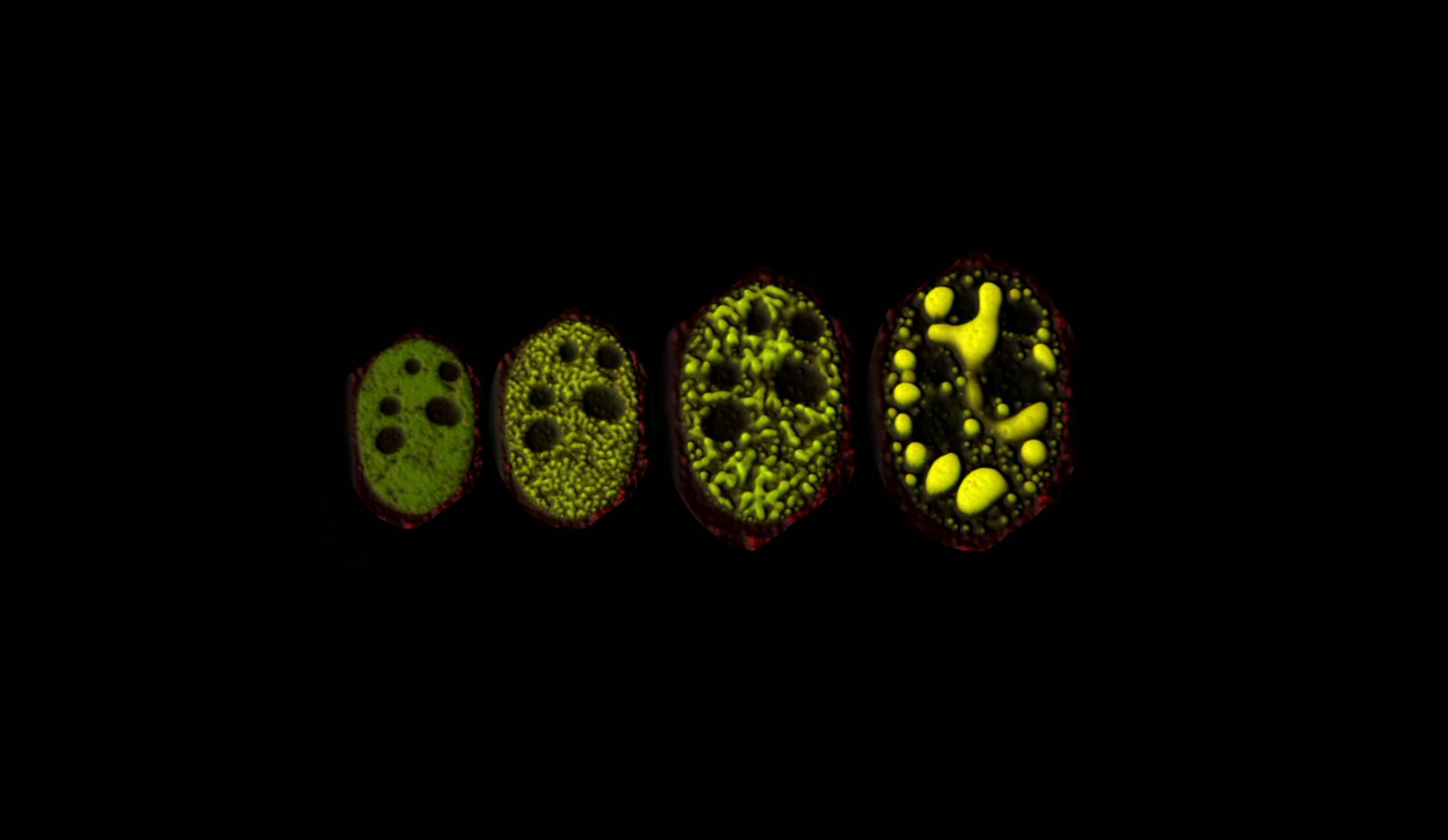 Creating new tools that harness light to probe the mysteries of cellular behavior, Princeton researchers have made discoveries about the formation of cellular components called membraneless organelles and the key role these organelles play in cells.

In two papers published Nov. 29 in the journal Cell, researchers from multiple Princeton departments report on the conditions that lead to the formation of membraneless organelles and the impact that the formation has on cellular DNA.

Clifford Brangwynne, associate professor of chemical and biological engineering and leader of the research teams, said the development of the two light-harnessing systems used in the research may prove at least as significant in the long run as the findings of the papers. The tools the researchers developed allow scientists to accurately probe intracellular phase separation — the process by which the chaotic liquid matter inside cells transforms into functioning cellular compartments called membraneless organelles.

Long overlooked, these organelles have been shown to play critical roles in human health. The loss of their fluid-like consistency, for instance, is implicated in diseases including cancer, Alzheimer’s and amyotrophic lateral sclerosis (ALS). Previous work in Brangwynne’s lab has shown the membraneless organelles play an important role in cell growth. And one of the two recent Cell papers demonstrates they also influence the genes controlling cellular behavior.

"These technology systems we've recently developed to control intracellular phase transitions should prove to be powerful tools for basic research and have many applications, particularly with regard to human health," said Brangwynne, who is also a Howard Hughes Medical Institute Investigator.

In the first project, the researchers developed a tool called Corelets and used it to create a quantitative description of the concentration of proteins driving phase separation in cells. Because protein concentrations help regulate the assembly of membraneless organelles, the description, called a phase diagram, will help researchers investigate the mechanisms that create the organelles at some local regions of the cell, but not in others. That, in turn, could point to ways to treat protein assemblies that go wrong.

The Corelet system uses genetically engineered, photosensitive proteins that shapeshift and change their behavior when exposed to light. The proteins, in this case human blood proteins called ferritin, crowd together into a tiny sphere. Exposure to a blue light causes other proteins to stick to the ferritin sphere. By altering certain parameters, the researchers can use the technique to trigger phase separation in different areas of cells.

"With these light-activated tools, we have gained unprecedented insight into controlling the phase transitions inside cells," said Dan Bracha, a postdoctoral researcher and the lead author of the Corelets paper.

In the second paper, the researchers examine how the formation of membraneless organelles affects the cell’s nucleus. Using a second tool, named CasDrop, the researchers looked at chromatin, the mixture of DNA, RNA and protein inside the nucleus. They found that as membraneless organelles form within the nucleus, they deform the chromatin in unexpected ways. They showed that the droplets push out unwanted genes, but can simultaneously pull together specifically targeted genes. The droplets can thus function like little mechanically active machines to restructure the genome.

The CasDrop system builds on the revolutionary gene-editing technology called CRISPR. It utilizes a protein machine called Cas9 to address particular genes in the cell. Brangwynne and colleagues engineered Cas9 to function as a platform, which upon light activation causes other proteins to bind to the gene, and locally phase separate, forming little dew droplets on the field of chromatin.

The co-lead authors of the CasDrop paper are Yongdae Shin, a postdoctoral researcher, and Yi-Che Chang, a doctoral student in chemistry.

Phillip Sharp, a Nobel laureate and professor at the Koch Institute for Integrative Cancer Research at the Massachusetts Institute of Technology who was not involved in the studies, commented that the findings are advancing our understanding of membraneless organelles.

"Brangwynne and colleagues have invented a novel method to investigate how interactions between proteins dynamically form condensates with phase transition properties in living cells," Sharp said. "The two papers highlight exciting discoveries at the interface of physics and cell biology that will lead to new treatments for diseases ranging from cancer to Alzheimer's."

See a video from the Brangwynne lab.

Other co-authors of the CasDrop study are Mikko Haataja, professor of mechanical and aerospace engineering; graduate student Daniel Lee of the Lewis-Sigler Institute for Integrative Genomics; Pierre Ronceray of the Princeton Center for Theoretical Science; Ned Wingreen, the Howard A. Prior Professor in the Life Sciences; postdoctoral fellow David Sanders; and Joel Berry of the Department of Materials Science and Engineering at the University of Pennsylvania.