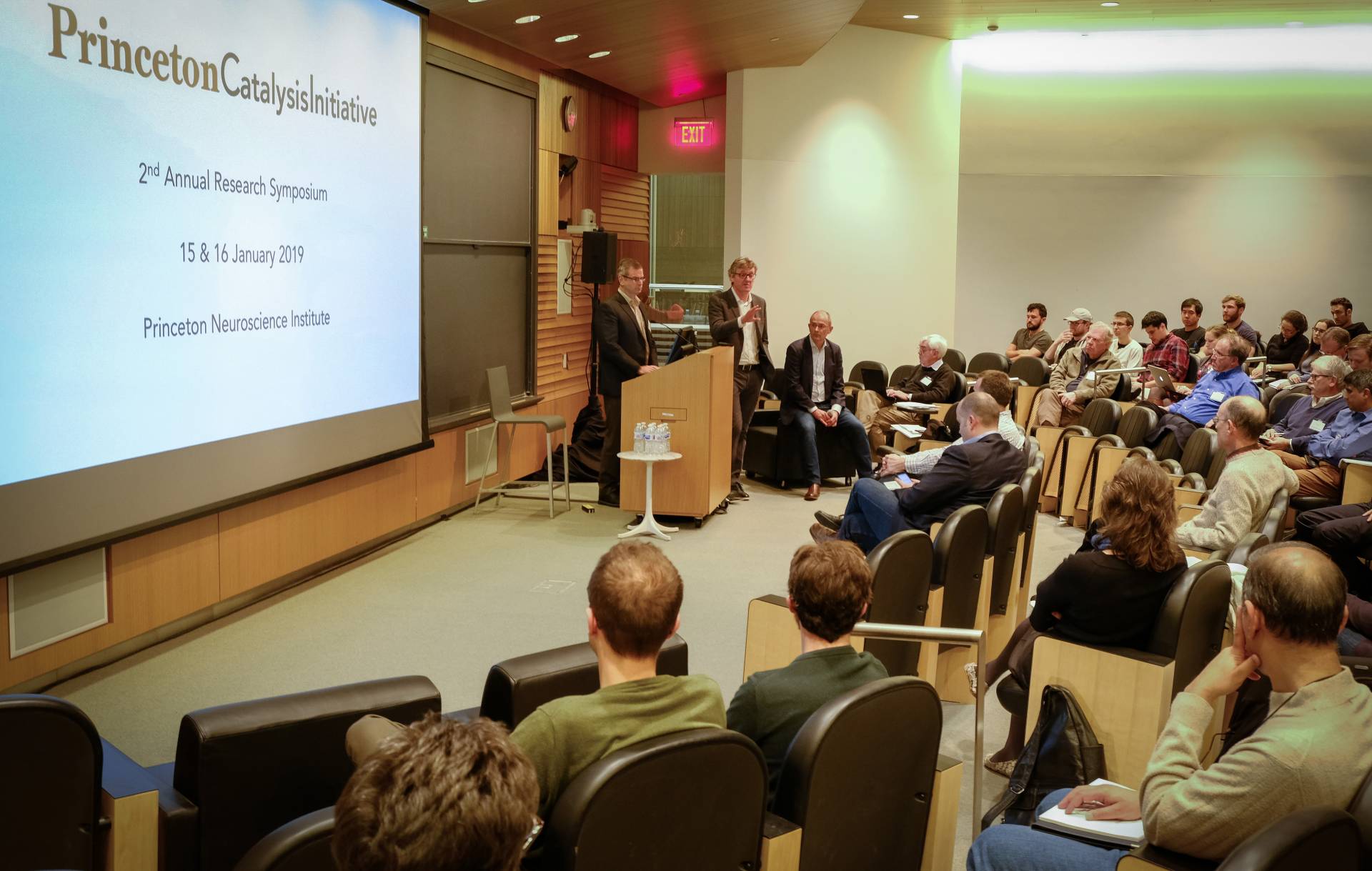 At a symposium Jan. 15-16, the Princeton Catalysis Initiative brought together dozens of scientists and engineers from across the University and the local innovation ecosystem to propose new research collaborations. Here, chemists Paul Chirik and David MacMillan (from left at podium), two of the four members of the PCI faculty committee, field questions from the researchers.

Through the Princeton Catalysis Initiative (PCI), scientists, engineers and scholars are reaching across disciplinary boundaries to create and explore new research areas at the intersection of what were once separate fields. PCI held its second annual symposium on campus Jan. 15-16, bringing researchers together to help fan the sparks of innovation and collaboration. 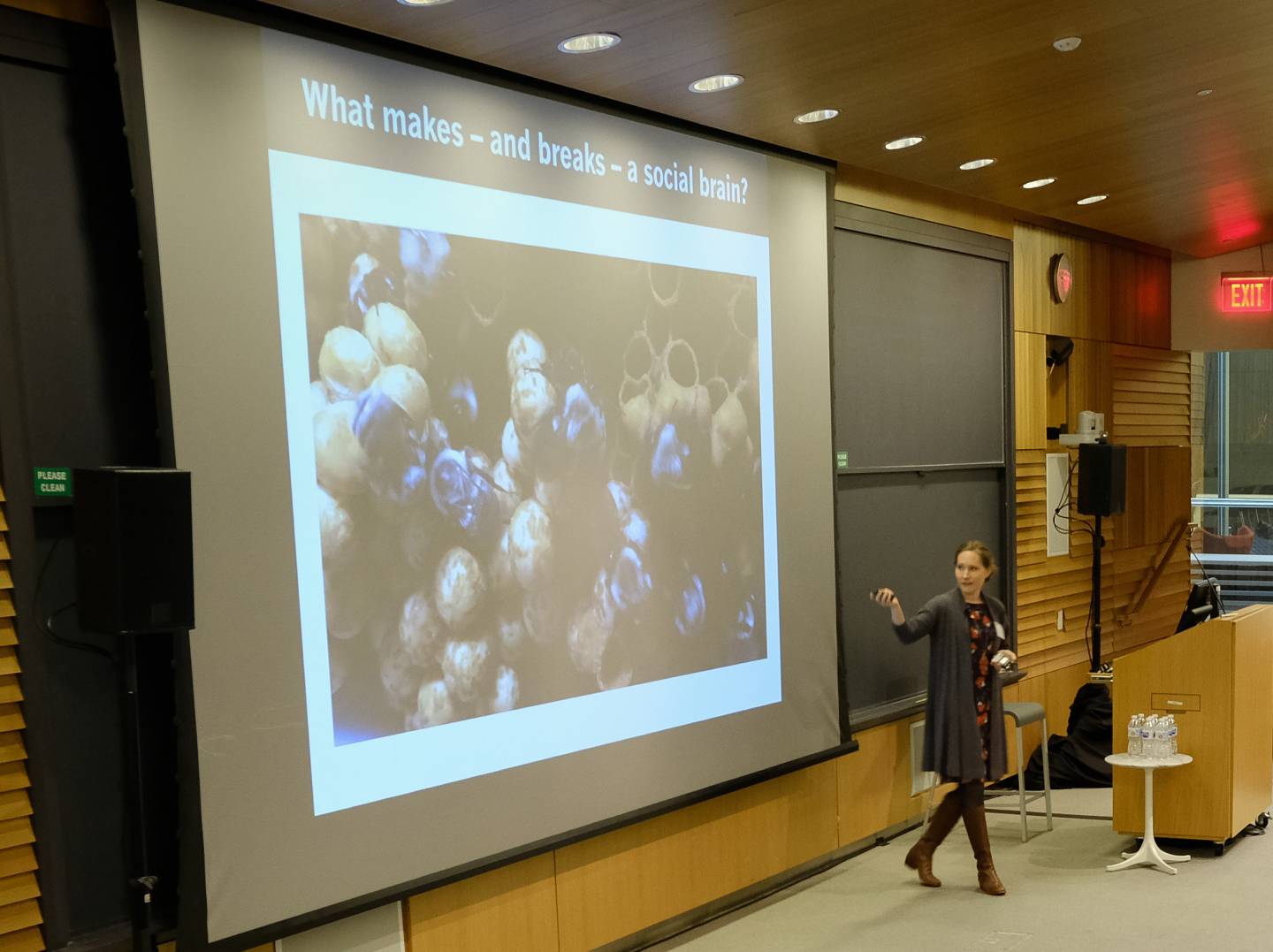 Sarah Kocher, an assistant professor of ecology and evolutionary biology and the Lewis-Siegler Institute for Integrative Genomics, was one of 40 researchers who presented their work to a room of potential collaborators in eight-minute talks spread over two days.

David MacMillan, the James S. McDonnell Distinguished University Professor of Chemistry, told attendees that the initiative has secured more than $51 million in commitments for research, which should fund some 500 collaborations over the next 10 years. In most cases, the funds will support two, two-year postdoctoral researchers per research project.

What would it take to accelerate research collaboration? This was the simple question MacMillan asked that led to the creation of PCI.

“This is a totally new mechanism — for any university, anywhere in the world — to incubate completely new fields of research,” said MacMillan. “Once it gets up and running, we expect it will inspire many others, because success breeds success.”

PCI is bringing together collaborators from across the University — from molecular biology to physics to electrical engineering and the Woodrow Wilson School of Public and International Affairs — and from several companies around the unifying concept of catalysis, chemical or biological reactions that are accelerated with a catalyst.

“We’re going to crosspollinate through departments,” said MacMillan. “Different areas coming together, going into completely new territories of research that haven’t been addressed before.”

Many non-scientists are amazed to discover the countless impacts of catalysis on everyday life, from manufacturing the fibers in furniture and clothing to more than 2,000 processes within the human body. “All the carbon in your body went through the enzyme Rubisco,” said Martin Jonikas, an assistant professor of molecular biology who was one of the first presenters at the symposium. He is looking for ways to encourage Rubisco to operate more quickly and efficiently, and he closed his talk by outlining several opportunities for research collaborations. “If any of this sounds interesting to you, send me an email and I’d love to grab coffee,” he concluded with a smile.

Bringing together researchers is the driving purpose behind PCI. It launched quietly a year ago with an intimate gathering of 28 faculty members, who shared brief research talks and began discussing possible collaborations. After that first symposium, PCI received “a remarkable number” of research proposals, said Ian Davies, the director of PCI. The brief applications — consisting of a short questionnaire and one written page or two PowerPoint slides — were then reviewed by peer reviewers and the four members of the PCI organizing committee: MacMillan; Abigail Doyle, the A. Barton Hepburn Professor of Chemistry; Paul Chirik, the Edwards S. Sanford Professor of Chemistry; and Robert Knowles, a professor of chemistry.

In 2018, PCI awarded $3.2 million to seed 21 projects from 42 faculty members. The fundamental requirements are that the scientists come from two different fields and that they propose moving into an area that is different from their existing work.

One of the funded researchers is Leslie Schoop, an assistant professor of chemistry who started at Princeton in 2017. “Because of PCI, we started thinking about catalysis and how we can connect our expertise in quantum materials to this field,” said Schoop, who is collaborating with Ali Yazdani, the Class of 1909 Professor of Physics, to investigate whether novel quantum materials and their exotic electronic properties can serve as heterogenous catalysts.

PCI “stimulated us to think in new directions,” she said.

The initial funding for PCI came from Princeton University and several private donors. PCI founders had hoped to develop three corporate partnerships within the first few years, but “we’ve been blown away by the enthusiasm from the industrial community,” MacMillan said. Within PCI’s first year they inked partnerships with major biopharma companies — including Bristol-Myers Squibb and Celgene — and MacMillan said that more will be ready to announce soon, likely within six months. Each industrial partner will fund multiple collaborations each year.

This initiative is “unleashing the power of interdisciplinary and cross-disciplinary basic research … to find solutions for tough societal issues,” said Bob Hugin, a Princeton trustee and former CEO of Celgene. “It’s incredibly valuable for our whole community to be able to bring these kinds of people together in an integrated way.”

Research teams are encouraged to apply for funding from the Princeton Catalysis Initiative, whether or not they attended the symposium, by contacting Ian Davies, director of PCI, at idavies@princeton.edu or 609-258-4465. Applications for new research collaborations are due by April 15, awards will be announced May 31 and funding will start July 1.