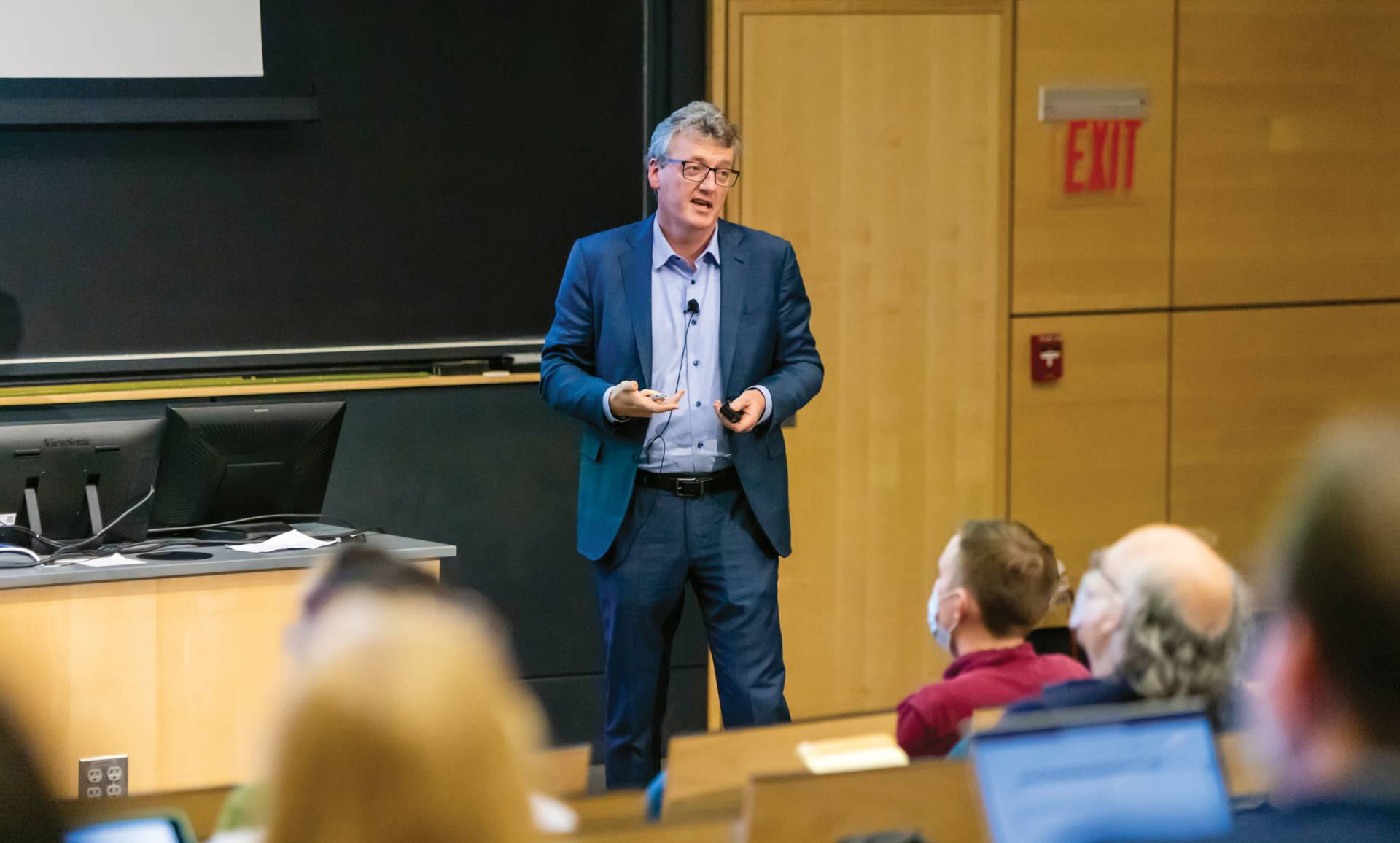 David MacMillan, the James S. McDonnell Distinguished University Professor in Chemistry and recipient earlier this month of the Nobel Prize in chemistry, was one of four original faculty founders of the Princeton Catalysis Initiative. He has frequently characterized the symposium as “speed-dating for scientists” for its ability to introduce, package, and accelerate ideas for new collaborations.

Held at the Department of Chemistry before an audience of more than 200 faculty, corporate leaders, and students, the symposium generated an exciting new vibe among potential collaborators in the Princeton Catalysis Initiative (PCI), said MacMillan, the James S. McDonnell Distinguished University Professor in Chemistry and recipient earlier this month of the Nobel Prize in chemistry.

MacMillan has often characterized the symposium as “speed-dating for scientists,” because it gathers faculty from diverse fields together with corporate leaders for a day-long showcase of the pioneering research taking place here for the purpose of creating new synergies and projects.

“There was something different about this year. I thought the first three years we held this symposium were strong, but this one blew them away,” said MacMillan. “The number of participants, the range of talks, the accessibility of the presentations for those in the audience – every 10 minutes offered something that was just so compelling in an area that you probably wouldn’t have known about.

“And you quickly understood the societal impact of the work being done here. It left me in awe at the end of the day. It was just extraordinary.”

Academic researchers often work in siloed departments, unaware of experts in other fields perhaps just across the street who might inform and participate in their work. Through PCI, they reach across these disciplinary boundaries to catalyze new collaborations. Faculty generate project proposals for corporate partners already in place with PCI who are eager to fund research offering solutions to some of society’s greatest problems.

In between symposium flash talks, faculty and corporate partners mingle and discuss opportunities. This pairing of minds accelerates projects that might otherwise take years to get off the ground.

Since its inception, PCI has grown to include 80 affiliated researchers across 15 departments and centers at Princeton, with over $75M in seed money committed. 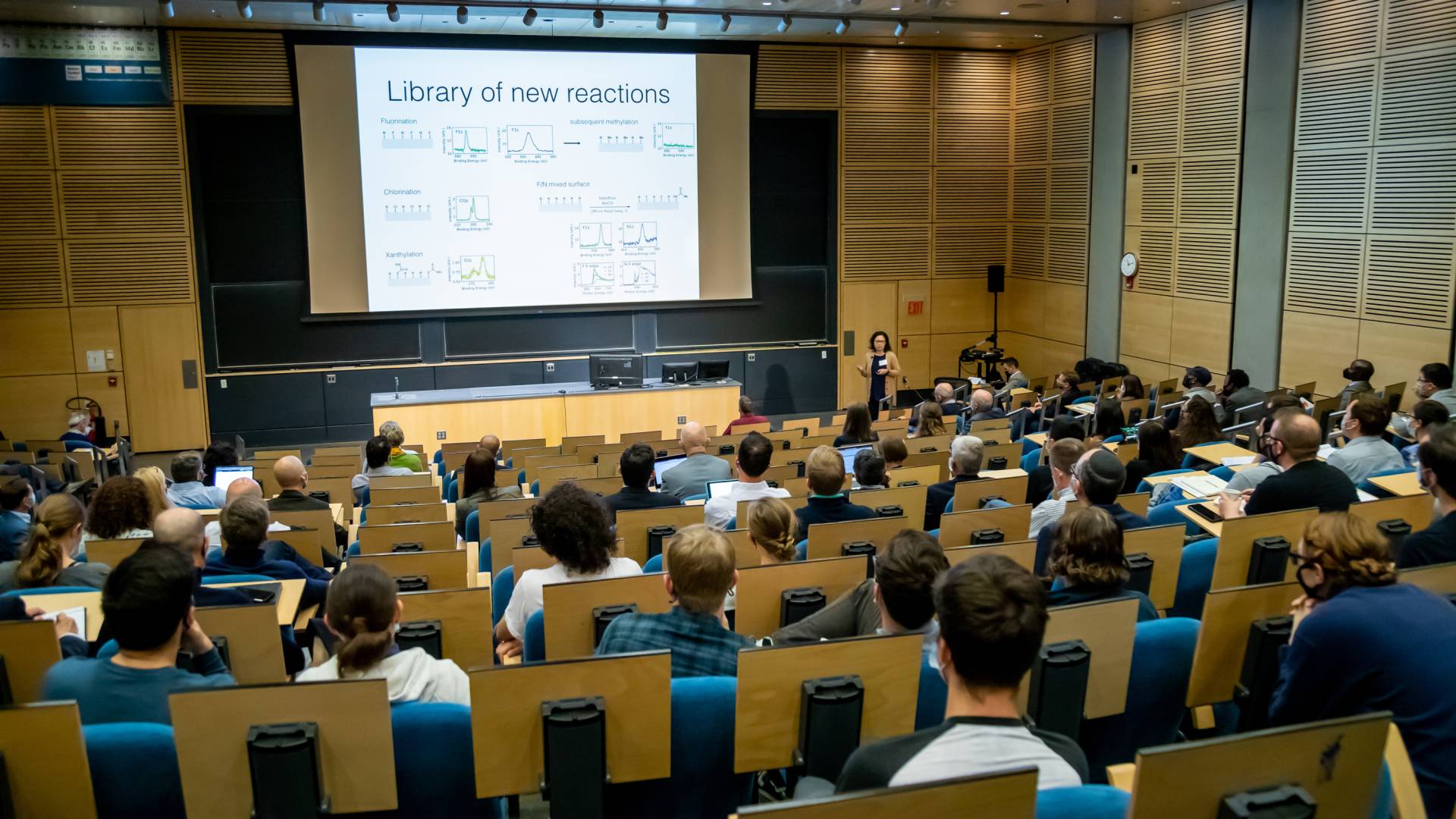 This fall’s Princeton Catalysis Initiative symposium was held at the Department of Chemistry before an audience of more than 200 faculty, corporate leaders and students.

Zemer Gitai, the Edwin Grant Conklin Professor of Biology and professor of Molecular Biology, put it succinctly during his own presentation on bacteria and its interaction with the world when he said: “PCI has really helped turn a lot of our gee-whiz ideas into reality.”

Rodney Priestley, the Pomeroy and Betty Perry Smith Professor of Chemical and Biological Engineering, and Princeton’s Vice Dean for Innovation, detailed promising results for his lab’s new technology, a solar-powered method for purifying drinking water, work that has been supported by PCI. 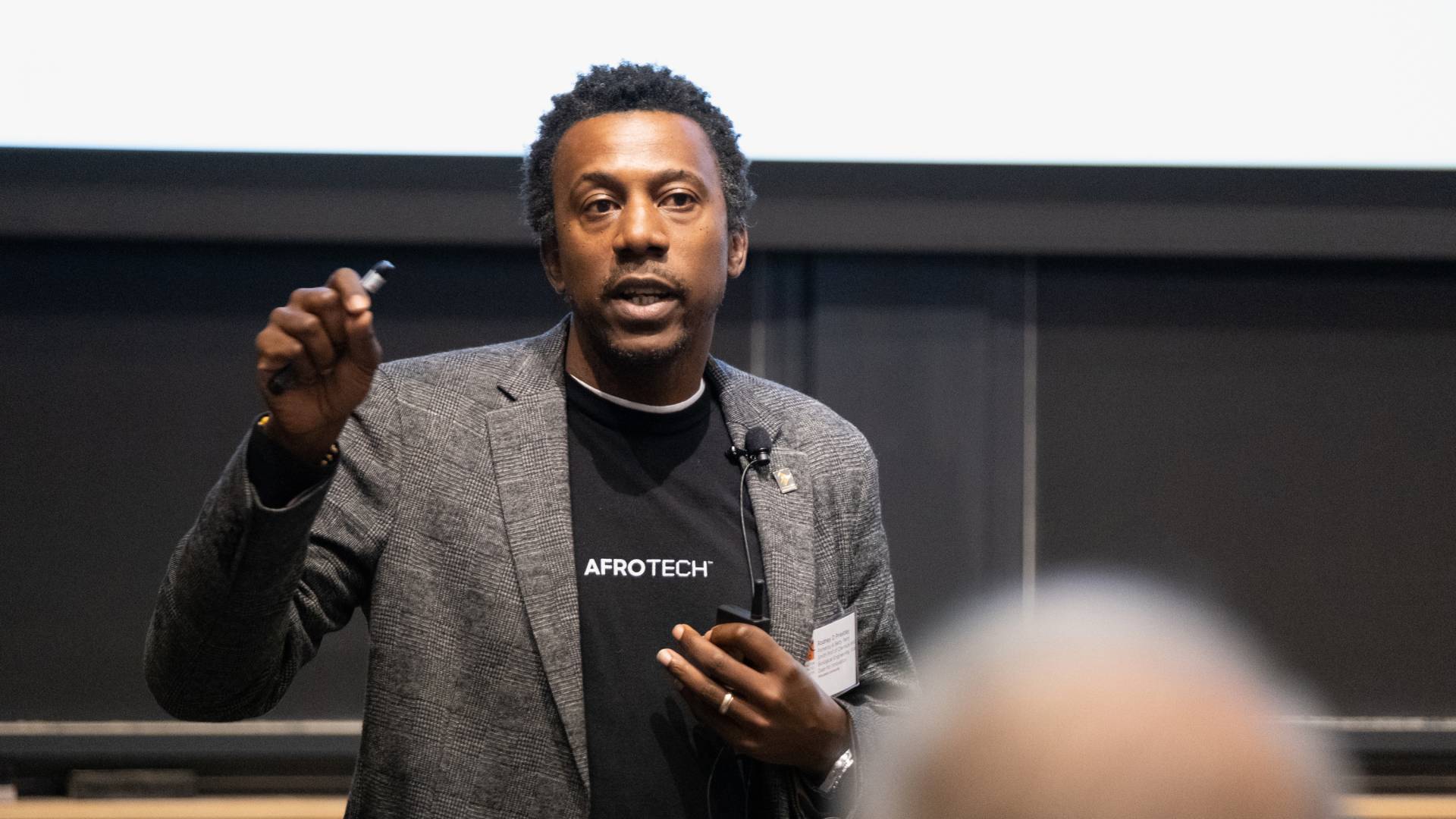 Rodney Priestley, the Pomeroy and Betty Perry Smith Professor of Chemical and Biological Engineering, and Princeton’s Vice Dean for Innovation, spoke about a solar-powered method for purifying drinking water, work that has been supported by PCI. “This is certainly a ‘Grand Challenge’ that we should be thinking about,” he said.

“Can we utilize soft-matter phase transformations for water purification? This is really an engineering problem, but there is some really interesting science behind it,” said Priestley. “This is certainly a ‘Grand Challenge’ we should be thinking about, and no surprise to people in the room here that with regard to the 17 Sustainable Development Goals that have been identified by the United Nations, water plays an extremely important role in all 17 of them.”

Symposium attendees are accustomed to hearing lectures about STEM-related topics like qubits, enzymes, and combinatorial math. But it took this fourth gathering to transport the audience to the Chernobyl Exclusion Zone, a grim regional relic of the 1986 nuclear accident that humans have largely abandoned but that animals – especially wolves – have usurped.

Shane Campbell-Staton, assistant professor in the Department of Ecology and Evolutionary Biology (EEB), described his research on anti-tumor immunity and whether it propagates through natural selection. His data compare wolves living in Yellowstone National Park and wolves whose entire lives are lived out in the Exclusion Zone.

“My group studies how evolution plays out over the course of single years or decades or months, and this link between evolution and anthropogenic change,” said Campbell-Staton. “We’re trying to understand how complex systems can be modified by micro-evolutionary changes to increase performance in the face of novel and extreme environments.”

Among those intrigued by the research was Bruce Ellsworth, senior director and head of Fibrotic Diseases/Discovery Chemistry at Bristol-Myers Squibb.

“This type of basic research and bringing together people of disparate backgrounds really gets the creativity flowing. I was talking with Shane at the break – what a great talk he gave. What’s really interesting is what else he might find and reveal as potential new targets as his research progresses,” Ellsworth said before wading through the crowd at break to seek out yet another researcher.

Sarah Kocher, an assistant professor in EEB and the Lewis-Sigler Institute for Integrative Genomics, discussed her work studying mechanisms that shape social behavior and the emergence and breakdown of social traits. Her studies focus on the sweat bee, because disparate groups within this one species exhibit either solitary or social behaviors.

“I really appreciated the time that everyone took to explain their boundary-pushing work in a way that people outside of their fields could access,” said Kocher. “It was wonderful talking with everyone throughout the event, and I walked away with a newfound admiration of all the amazing science happening here at Princeton. I think PCI has helped to seed some exciting, new collaborations for our research group.”

Presentations were also given by faculty from the departments of Computer Science, Chemistry, Physics, Electrical and Computer Engineering, Sociology, and the School of Public and International Affairs. 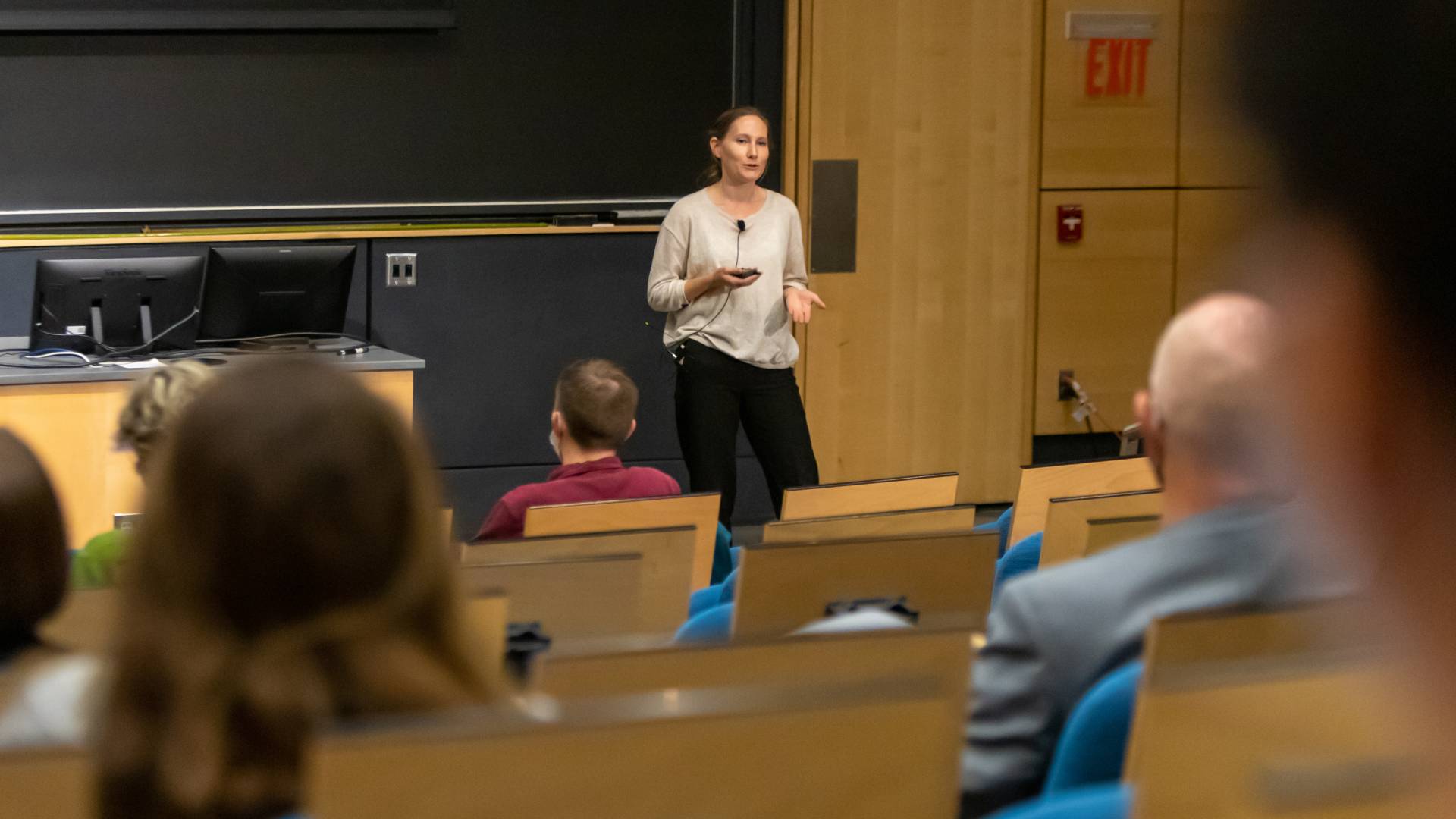 Presenting her research on mechanisms that shape social behavior and the emergence and breakdown of social traits, Sarah Kocher, assistant professor in the Department of Ecology and Evolutionary Biology, said she appreciated the range and accessibility of the lectures at the day-long symposium. She added, “I think PCI has helped to seed some exciting, new collaborations for our research group.”

'Something every institution can benefit from'

Underscoring the uniqueness of PCI in catalyzing cross-disciplinary research, MacMillan said he feels the time is right for other universities to adopt similar initiatives.

“As far as we know, we think we’re the original version, but it’s something every institution can benefit from,” said MacMillan. “What PCI has done – and this is becoming so evident now – is to massively expand the conversations across campus. Faculty get to know each other socially and scientifically. It’s so obvious after the fact, but it’s something we all want to do.

“It would be great if other universities consider creating this kind of initiative. It’s remarkable what it has accomplished for Princeton in just four years. The chat-up is just so good.”

Research teams are encouraged to apply for funding from the Princeton Catalysis Initiative, whether or not they attended the symposium, by contacting Ian Davies, director of PCI, at idavies@princeton.edu. Applications are due by Feb 15, 2022, awards will be announced May 31, and funding begins on July 1.

The Princeton Catalysis Initiative acknowledges generous support from Anthony Evnin ’62, and Eric ’76 and Wendy Schmidt through the Schmidt DataX Fund.