Jack Lohmann, a Princeton English major and environmental studies certificate student, spent a month on the Pacific island of Nauru for his senior thesis documenting life and politics in a destroyed environment. Strip mining for phosphate during the 20th century reduced the 8-square-mile nation to a narrow ring of coastal plain surrounding a moonscape of towering limestone spires and deep chasms (shown). Today, roughly 80% of the island is uninhabitable. With few economic opportunities, Nauru is now home to a controversial immigrant detention center funded by Australia.

When planning his stay on the remote Pacific island of Nauru last year, Princeton senior Jack Lohmann had expected that a place often portrayed as a post-environmental dystopia would present challenges. Being besieged by feral dogs the moment he left the airport was not one he had anticipated.

"Packs of wild dogs roam the island and a lot of people are terrified," Lohmann said. "They come snarling and barking wherever you walk. The ones by the airport are particularly bad."

For Lohmann, that moment came to symbolize the dichotomy of everyday life as he saw it on the 8-square-mile island nation. “It’s a mixture of the very normal and the extremely sad and disturbing,” said Lohmann, who will receive his bachelor’s degree in English and certificates in environmental studies and journalism from Princeton on June 4. “When people talk about climate change and environmental destruction, they ask, ‘What happens next?’ I think Nauru is what happens next.”

For his senior thesis, Lohmann traveled to Nauru in June 2018 on a PEI Environmental Scholarship to spend a month as a PEI intern documenting life in an environment that has been exploited to the point of erasure. Nauru is located roughly 2,800 miles southwest of Hawaii in the Pacific region of Micronesia and is separated from the nearest country by 190 miles of ocean. The world’s third-smallest nation, Nauru is, however, one of the world’s largest phosphate-rock islands, which, beginning in 1907, made it among the richest sources of phosphorus for making agricultural fertilizer.

When the deposits largely ran out 90 years later, the island had been reduced to a narrow ring of sand and coastal plain surrounding a strip-mined moonscape of towering limestone spires and deep chasms. Today, roughly 80% of the island is uninhabitable and most endemic wildlife has vanished. The lack of arable land has resulted in a dependence on processed food imported mostly from Australia, contributing to the world’s highest obesity rate.

“When you read about this place online, outsiders who have visited describe it as weird or sad, or both,” Lohmann said. “I went with an open mind to see what it’s like to actually live in Nauru. I learned a lot, not just as a journalist, but as a person.”

Lohmann was first drawn to the subject of Nauru by the country’s new industry — serving as a detention center for refugees stopped en route to Australia by boat. “The phosphorous moneymaking scheme that allowed for millions and millions of dollars to be made has been replaced by a refugee scheme,” he said. “People are the new resource.”

Open since 2001 (with a hiatus from 2008 to 2011), the Nauru Regional Processing Centre has been a holding place for migrants who tried to reach Australia by boat, which is in violation of the country's policies.

In return, Nauru has received hundreds of millions of Australian dollars (A$), which is the island’s official currency.

The center now houses fewer than 300 people, but held a peak of 1,233 people in 2014 — equal to more than 10% of Nauru’s population. Reports have described detainees as being held in spartan conditions for years without due process and being subjected to mental, physical and sexual abuse. The presence of the center and the cashflow it provides has reportedly fostered deep political corruption and authoritarian leanings in Nauru.

While in Nauru, Lohmann interviewed many of the remaining detainees. He heard the stories of overcrowding, hopelessness, mental deterioration and abuse that have been reported by journalists from around the world. Those reports resulted in the government of Nauru effectively closing the country off to journalists in 2014. (That same year, the country’s judiciary was deported.)

Lohmann was able to connect a regional controversy in Australasia to larger issues of how a society can be shaped by its environmental practices, said his primary adviser, Rob Nixon, the Thomas A. and Currie C. Barron Family Professor in Humanities and the Environment and professor in English and the Princeton Environmental Institute. Lohmann also worked closely with Tamsen Wolff, associate professor of English, when writing his thesis.

Natural resource wealth often coincides with inequality and human rights abuses, Nixon said. “Nauru is emblematic of changes in the relationship between environmental futures and the futures of human rights and democracy,” Nixon said.

“When you have an environmental bottleneck created by unregulated and extreme extraction, you’re left with an environment that allows for few economic options,” he said. “In Nauru, the leaders ultimately decided to sell the national soul to the Australian government to create this human rights black hole.”

In the United States, the regions where mountaintop removal has permanently degraded the environment could be seen as an analog to Nauru, Nixon said. In West Virginia and Kentucky, the sites of flattened mountains have been used to construct prisons — often criticized as unnecessary — that are intended to fill the economic vacuum of coal mining.

“There’s a fascinating connection between Nauru and places in Appalachia in which you have a ravaged environment where the people who are stepping in are prison guards and that’s the new economic lifeline,” Nixon said.

“Regional ‘islands’ such as Appalachia seem to have a separate set of environmental rules and a very deep complicity between extractive overlords and the political class,” he continued. “Once the resource has been extracted and the long-term environmental fallout has happened, everything from job security and the ecology of the public space — the streams, the mountains, the hunting — has been degraded. You’ll have a nostalgia for a different time, but that time is not coming back. A time before the land was erased.”

Lohmann’s work also helps provide the voices of detainees and Nauruans that are missing from Australia’s debate on the detention center, an issue as contentious there as President Donald Trump’s border wall is in the United States, Nixon said.

“Nauru is hotly debated as a kind of tipping point in the moral identity of Australia,” Nixon said. “Jack created some very strong character profiles of people opposed to this regime of detention, from the detained to the Nauru politicians who have been driven into exile. Because of the blanket ban on journalists, that perspective is hard to find and tends to be elided by Australian self-interest. I think once his story is out, particularly in Australia, people will pay attention.”

Lohmann came across news coverage of the Nauru center in 2017 while looking for important stories he felt were underreported as a topic for his junior year project. Wolff recalled that in her first meeting with Lohmann about his project, he mentioned one word — “islands” — when she asked him what he was interested in writing about. “From that germ, he found his way to Nauru and, acting entirely independently, pursued the people, information and ideas that led to his astonishing thesis,” she said.

“He not only managed to spend 29 days doing investigative work in Nauru — which has banned journalists — and interview over 100 people in Nauru, Australia and the U.S., but he revealed a specific intersection of human rights abuses and environmental degradation in a remarkably imaginative and wholehearted way,” Wolff said. “You will not find a more resourceful, intrepid or tenacious researcher.”

Lohmann wanted to explore the connection between Nauru’s degraded environment and its controversial detention center, which he felt few articles had done, he said.

“So much that is written about refugees in Nauru and elsewhere blends into basic narratives of human suffering,” Lohmann said. “But in order to fully understand what’s happening in Nauru today, you have to talk about the history of mining. You have to have these conversations about countries and corporations exploiting smaller societies, and so often that takes an environmental form.”

In the 1970s, Nauruans — who gained independence from Australia in 1966 — were some of the richest people in the world thanks to phosphate. The national piggy bank known as the Nauru Phosphate Royalties Trust at one point took in A$80 million per year in a country with a population of roughly 10,000.

But when the phosphate ran out, opulent government spending and no means of replenishment reduced the trust by A$1 billion in little more than a decade. In the 1990s, Nauru became a hotbed for illegal money laundering to make ends meet, Lohmann said.

“If you read my thesis start to finish, you start to see that the human rights crisis and political corruption of today are connected to the environmental destruction of the past,” Lohmann said. “You see a culture that became reliant upon money and the cashflow of the phosphate export. That culture changed dramatically when that money ran out.” 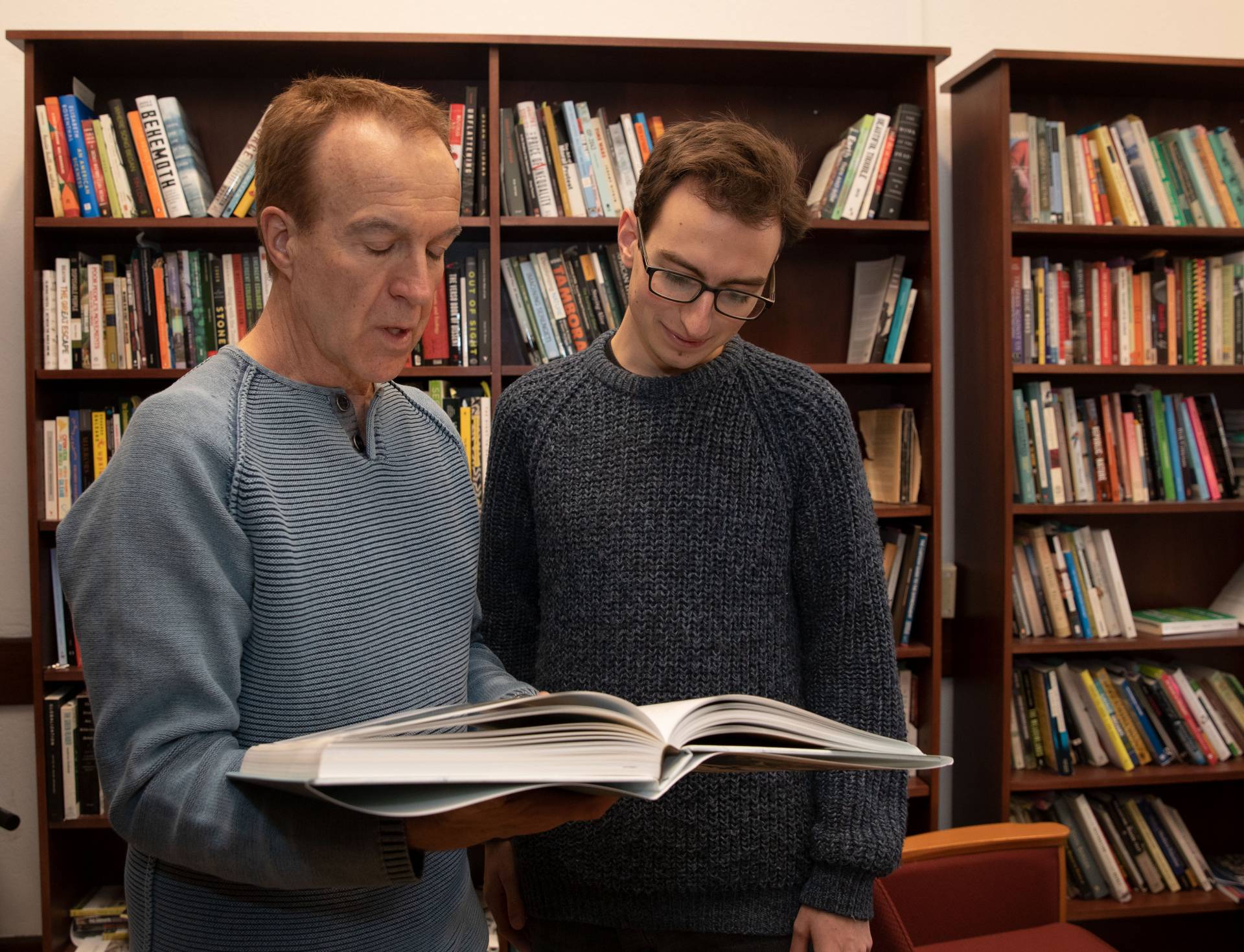 Rob Nixon (left), the Barron Family Professor in Humanities and the Environment and professor in English and the Princeton Environmental Institute, worked with Jack Lohmann (right) to develop his thesis. Lohmann’s work connects a hotly debated topic in Australia to themes of environmental exploitation and human-rights abuses that resonate globally, Nixon said, including in regions of the United States such as Appalachia.

In addition to doing investigative work, Lohmann also made friends and worked to document a happier side of Nauru that gets less attention, he said. “The island isn’t just refugees and phosphate — there’s an important distinction in the way the refugee money has influenced the government and how it’s affected people,” Lohmann said.

“If you live in Nauru, it’s possible to be happy,” he said. “While overshadowed by the mines and the refugee regime and the authoritarian government, my experiences, minute-to-minute, were characterized by people who were extraordinarily kind and interesting.”

Lohmann hitchhiked everywhere and got to know the people he met, interviewing some for his thesis (journalists caught in Nauru can be arrested and deported). People gave him rides and invited him into their homes. Across from the house where Lohmann rented a room was a trampoline that, at any time of the day or night, had eight to 10 kids jumping on it. And bingo is a major event — every phone in the entire country receives notifications via text of the next upcoming bingo game and prizes. (Lohmann never won anything.)

“To visit a place that’s been described as so strange and sad, and to see normal life happening, is surreal. Those two realities can coexist,” Lohmann said. “Nauru has bad elements, but it’s also a special place. I tried my best to write about the island with subtlety and care.”