You might have observed plants competing for sunlight — the way they stretch upwards and outwards to block each other’s access to the sun’s rays — but out of sight, another type of competition is happening underground. In the same way that you might change the way you forage for free snacks in the break room when your colleagues are present, plants change their use of underground resources when they’re planted alongside other plants.

In a paper published today in Science (and featured on the cover), an international team of researchers led by Princeton graduate student Ciro Cabal sheds light on the underground life of plants. Their research used a combination of modeling and a greenhouse experiment to discover whether plants invest differently in root structures when planted alone versus when planted alongside a neighbor. 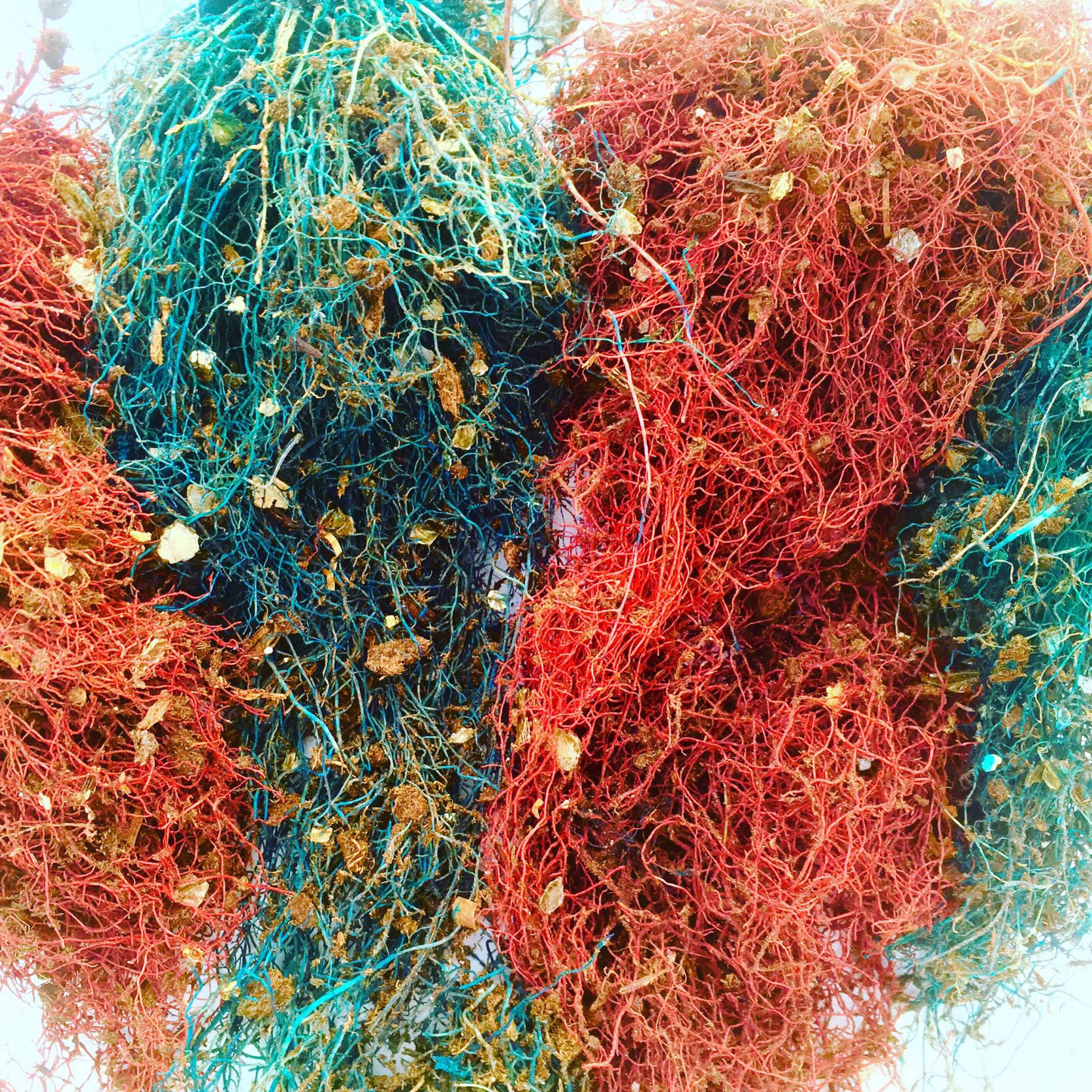 How do plant roots store carbon? To investigate, Princeton researchers grew pepper plants alone and with neighbors, and stained the roots of neighboring plants (by injection) to distinguish which roots belonged to which plant. They found that the energy a plant devotes to its roots depends on proximity to other plants: when close together, plants heavily invest in their root systems to compete for finite underground resources; if far apart, they invest less. As about a third of the world's vegetation biomass (and therefore carbon) is belowground, this model provides a valuable tool to predict root proliferation in global earth-system models.

“This study was a lot of fun because it combined several different kinds of mind candy to reconcile seemingly contradictory results in the literature: a clever experiment, a new method for observing root systems in intact soils and simple mathematical theory,” said Stephen Pacala, the Frederick D. Petrie Professor in Ecology and Evolutionary Biology (EEB) and the senior author on the paper.

“While the aboveground parts of plants have been extensively studied, including how much carbon they can store, we know much less about how belowground parts — that is, roots — store carbon,” said Cabal, a Ph.D. student in Pacala’s lab. “As about a third of the world's vegetation biomass, hence carbon, is belowground, our model provides a valuable tool to predict root proliferation in global earth-system models.”

Plants make two different types of roots: fine roots that absorb water and nutrients from the soil, and coarse transportation roots that transport these substances back to the plant’s center. Plant “investment” in roots involves both the total volume of roots produced and the way in which these roots are distributed throughout the soil. A plant could concentrate all of its roots directly beneath its shoots, or it could spread its roots out horizontally to forage in the adjacent soil — which risks competition with the roots of neighboring plants.

The team’s model predicted two potential outcomes for root investment when plants find themselves sharing soil. In the first outcome, the neighboring plants “cooperate” by segregating their root systems to reduce overlap, which leads to producing less roots overall than they would if they were solitary. In the second outcome, when a plant senses reduced resources on one side due to the presence of a neighbor, it shortens its root system on that side but invests more in roots directly below its stem.

Natural selection predicts this second scenario, because each plant acts to increase its own fitness, regardless of how those actions impact other individuals. If plants are very close together, this increased investment in root volume, despite segregation of those roots, could result in a tragedy of the commons, whereby the resources (in this case, soil moisture and nutrients) are depleted. 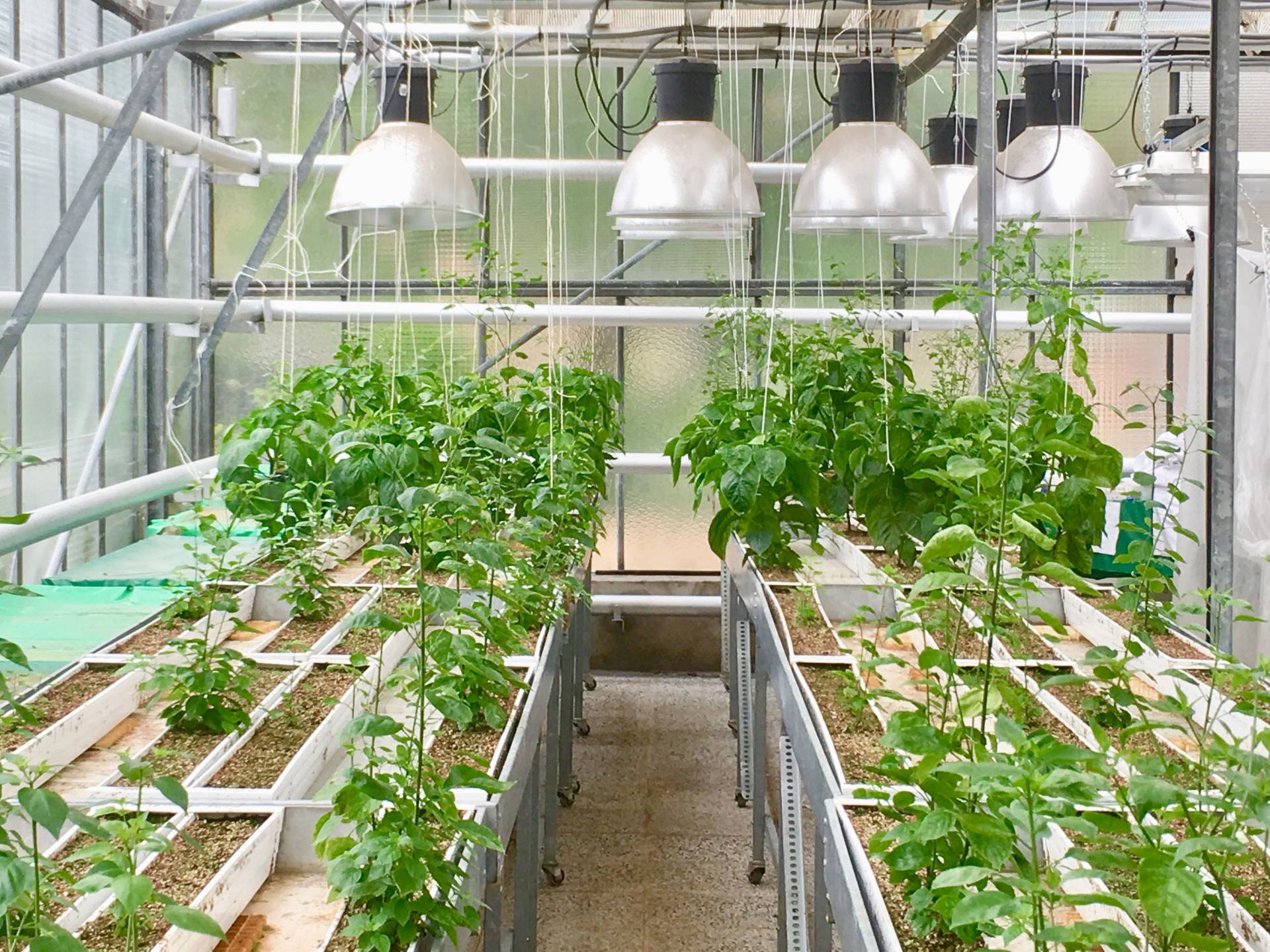 Pepper plants were grown in this greenhouse at the Museo Nacional de Ciencias Naturales (CSIC) in Madrid to investigate how their belowground behavior differed when planted alone or alongside a neighbor.

To test the model’s predictions, the researchers grew pepper plants in a greenhouse both individually and in pairs. At the end of the experiment, they dyed the roots of the plants different colors so that they could easily see which roots belonged to which plant. Then, they calculated the total biomass of each plant’s root system and the ratio of roots to shoots, to see whether plants changed how much energy and carbon they deposited into belowground and aboveground structures when planted alongside neighbors, and counted the number of seeds produced by each plant as a measure of relative fitness.

The team discovered that the outcome depends on how close a pair of plants are to each other. If planted very close together, plants will be more likely to heavily invest in their root systems to try to outcompete each other for finite underground resources; if they are planted further apart, they will likely invest less in their root systems than a solitary plant would.

Specifically, they found that when planted near others, pepper plants increased investment in roots locally and reduced how far they stretched their roots horizontally, to reduce overlap with neighbors. There was no evidence for a “tragedy of the commons” scenario, since there was no difference in the total root biomass or relative investment in roots compared to aboveground structures (including the number of seeds produced per plant) for solitary versus co-habiting plants.

Plants remove carbon dioxide from the atmosphere and deposit it in their structures — and a third of this vegetative carbon is stored in roots. Understanding how carbon deposition changes in different scenarios could help us more accurately predict carbon uptake, which in turn could help design strategies to mitigate climate change. This research could also help optimize food production, because in order to maximize crop yield, it’s helpful to understand how to optimally use belowground (and aboveground) resources.