Naoum Fares Marayati, a 2019 graduate of Princeton University, has been named a George J. Mitchell Scholar. Twelve Mitchell Scholarships were awarded to students nationwide by the nonprofit U.S.-Ireland Alliance. 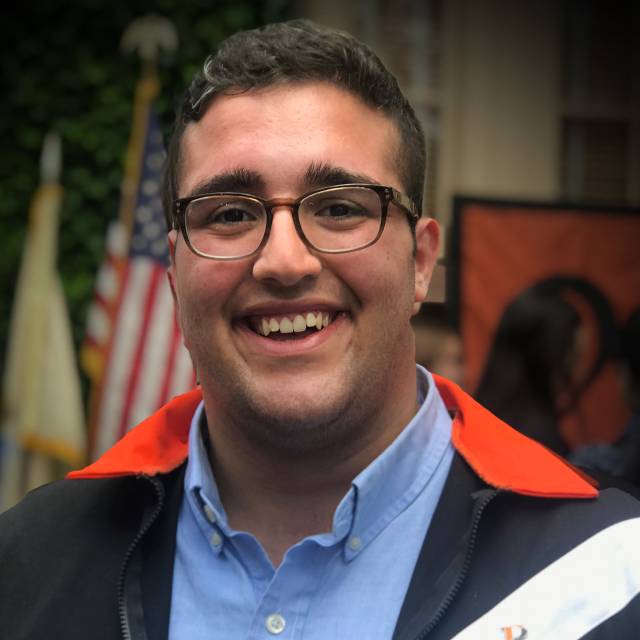 Marayati, a resident of Kernerville, North Carolina, will study global health at Trinity College Dublin. He graduated from Princeton with an A.B. in psychology and certificates in cognitive science, linguistics, and translation and intercultural communication.

Marayati is currently a medical student at the Icahn School of Medicine at Mount Sinai in New York City. Born in Aleppo, Syria, Fares immigrated with his family to the U.S. when he was in the 10th grade as the war there was beginning. He is interested in pediatric healthcare, global health and refugee resettlement, particularly early interventions that shift the ways displaced children and families navigate new geographies.

“It is an absolute honor and privilege to be able to pursue this scholarship to study the interaction of migration and healthcare, especially as I navigate how my future career as a physician can contribute to understanding disparities in early childhood healthcare access and interventions for children impacted by displacement,” Marayati said. “I dedicate this work to my family, community, the mentors who have believed in me, and to all the families who continue to navigate the diaspora and carry home everywhere they go.”

Fares is vice president of the student body at Mount Sinai and a clinic manager at the East Harlem Health Outreach Partnership, Mount Sinai’s student-run free clinic for East Harlem residents without health insurance. In this capacity, he was a student organizer for Mount Sinai’s COVID-19 Student Task Force where he led initiatives to support the Mount Sinai and East Harlem communities during the peak months of the COVID-19 pandemic in New York City, and the continuity of remote care and daily necessities for members of the community. His research interests at Mount Sinai have included pediatric traumatic brain injury, stroke care interventions and social determinants of health.

While at Princeton, Marayati participated in three summer-long immersive internships through Princeton Internships in Civic Service (PICS) that were instrumental in developing his research interests. In 2016, he interned at Wake Forest Baptist Medical Center in Winston-Salem, North Carolina, where he analyzed outcomes of vacuum-assisted wound closure with trauma surgery. The following summer he interned at Children’s National Medical Center in Washington, D.C., studying cerebellar mutism syndrome with pediatric neurosurgery. Finally, in 2018, he traveled to Dublin, Ireland, to work alongside a pediatric surgeon conducting molecular diagnostics on Hirschsprung’s Disease.

Also formative in his Princeton experience was a trip to Sarajevo, Bosnia, with a journalism class studying post-conflict memorialization and another to Mexico City with a Latin American studies class studying collective post-colonial memory, geography, politics and everyday life, he said.

Further exploring his interest in immigration and diaspora, and specifically of the impacts on young bilingual children, Marayati worked for four years as a research assistant in the Princeton Baby Lab, led by Casey Lew-Williams, professor of psychology.

Lew-Williams vividly recalls meeting Marayati at a first-year Academic Expo. “From that moment forward — in classes, in the Princeton Baby Lab, and during a celebratory phone call a few days ago — I’ve formed an ever-increasing belief in what Fares can bring to the world,” Lew-Williams said. “His work on healthcare for immigrants and refugees is needed, now.”

“Fares’ capacity for learning is only matched by his enthusiasm for learning,” Lew-Williams added. “He has this astoundingly positive effect on those around him, and he made Princeton a better intellectual and social community for so many.”

As an undergraduate, Marayati was a teaching assistant and tutor in the McGraw Center for Teaching and Learning. He also served as a tour guide at the Princeton University Art Museum. He continues to work with Princeton’s Annual Giving program on its national committee.

During his years at Princeton, Marayati lived at Forbes College, where he served as a residential college adviser (RCA) during his junior and senior years. Chemistry Professor Michael Hecht, who was Head of Forbes College, said Marayati was “an exceptional student, both academically and interpersonally.”

“Fares’ connection to his homeland was severed when his family escaped Syria and settled in the U.S.,” Hecht said. “In response, Fares developed a remarkable ability to forge new connections with people, places and cultures. These connections are motivated by Fares’ deep desire to care for others: as an RCA mentoring his Zees, as a future physician caring for children, and now as a Mitchell Scholar focusing on migration and healthcare.”