Princeton senior Julia Chaffers has been named a 2022 Marshall Scholar to pursue two years of graduate study in the United Kingdom. The Marshall Scholarship offers intellectually distinguished young Americans the opportunity to develop their abilities as future leaders by studying at a U.K. university of the recipient’s choice.

Chaffers, of Wellesley, Massachusetts, is concentrating in history and pursuing a certificate in African American studies. She is among the 41 winners of the 2022 Marshall Scholarship, selected from nearly 1,000 applicants from public and private colleges and universities across the United States. 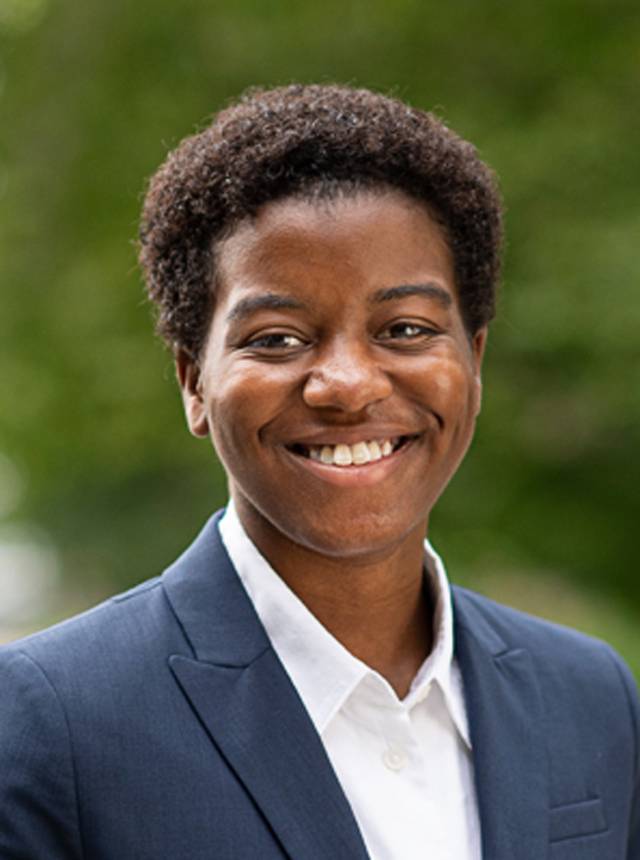 For her first year of graduate study, Chaffers will pursue a master’s degree in United States history and politics at University College London. For her second year, she plans to study British history with a focus on public history at the University of Manchester.

“History allows me to answer the questions that keep me up at night, the questions that others share but cannot answer,” Chaffers said. “I want to continue studying history to tell more undiscovered stories, and bring communities together around a more complex shared understanding of our past and present.”

At Princeton, she is president of the American Whig-Cliosophic Society, the nation’s oldest collegiate political, literary and debate society. She is also a senior columnist for the Daily Princetonian student newspaper and was a communications assistant for the Department of African American Studies.

Chaffers said her studies as a Marshall Scholar will build on her research related to the legacies of slavery and racism in the United States, allowing her to examine these subjects within a more global context.

“Through these two master’s programs, I hope to explore the connections between how the U.S. and U.K. create and maintain collective memory around slavery and race,” she said. “In 2020, protest movements in both countries targeted statues of enslavers and other oppressors and opened conversations about the stories we tell through our built environment. I look forward to digging more deeply into these questions and learning from how British scholars and activists approach these issues. I'm also especially excited to learn about and engage in public history and consider how we use history in the public sphere, whether that be through monuments, museums or media.”

Joshua Guild, associate professor of history and African American studies, said Chaffers has “all the makings of a gifted historian.”

“Julia stands out for her determination, her integrity and her commitment to engaging difficult histories and equal measures of care and critical authority,” Guild wrote in his letter of recommendation. “With her experiences as a student columnist and debater, Julia Chaffers is already well-versed in public intellectual engagement. She is a skilled writer and insightful thinker whose commitments to interrogating our shared historical inheritances make her the kind of twenty-first century leader we desperately need.”

Chaffers’ senior thesis explores Confederate mascots in the United States, building on her junior year paper “Rebels With a (Lost) Cause: Tracing Confederate Memory in Walpole, Massachusetts, 1965-2020.” The paper focused on a high school near her hometown that had a Rebels mascot until 2020 and had a history of using Confederate imagery for decades.

“My thesis expands on this research to study other schools outside the South that until recently had Confederate mascots. I’ll explore their histories of Confederate imagery and the community movements to change those mascots, which have succeeded in recent years. I want to understand why and how these ‘Lost Cause’ narratives took hold in these communities and how people have pushed for more accurate and inclusive narratives,” she said.

Chaffers hopes to eventually become an academic historian in a way that incorporates her interests in public commentary and community engagement.

In the summer of 2019, she spent a month in France with the Plato in Paris program led by Professor of Philosophy Benjamin Morison. The class explored Paris to better understand the arguments that Plato made about designing the ideal city and the role of art in society.

“It set me on the academic path I’m on now by focusing my attention on the stories we tell and who is included and excluded in dominant narratives,” Chaffers said.

Chaffers is also a member of First College and has been involved in faculty, staff and student groups examining iconography and art around the residential college.

“Julia is an absolutely brilliant student, and undoubtedly one of the best and most insightful thinkers and writers on campus,” said AnneMarie Luijendijk, professor of religion and head of First College.

In addition, Chaffers is co-chair of the 2022 Class Day Committee and last summer worked for The Century Foundation to conduct policy research on diversity and equity programs in K-12 education for the foundation’s start-up think tank Next 100.