In a new Nature Astronomy study, an international team of astrophysicists report how, when tiny galaxies collide with bigger ones, the bigger galaxies can strip the smaller galaxies of their dark matter — matter that we can’t see directly, but which astrophysicists think must exist because, without its gravitational effects, they couldn’t explain things like the motions of a galaxy’s stars.

It’s a mechanism that has the potential to explain how galaxies might be able to exist without dark matter — something once thought impossible. 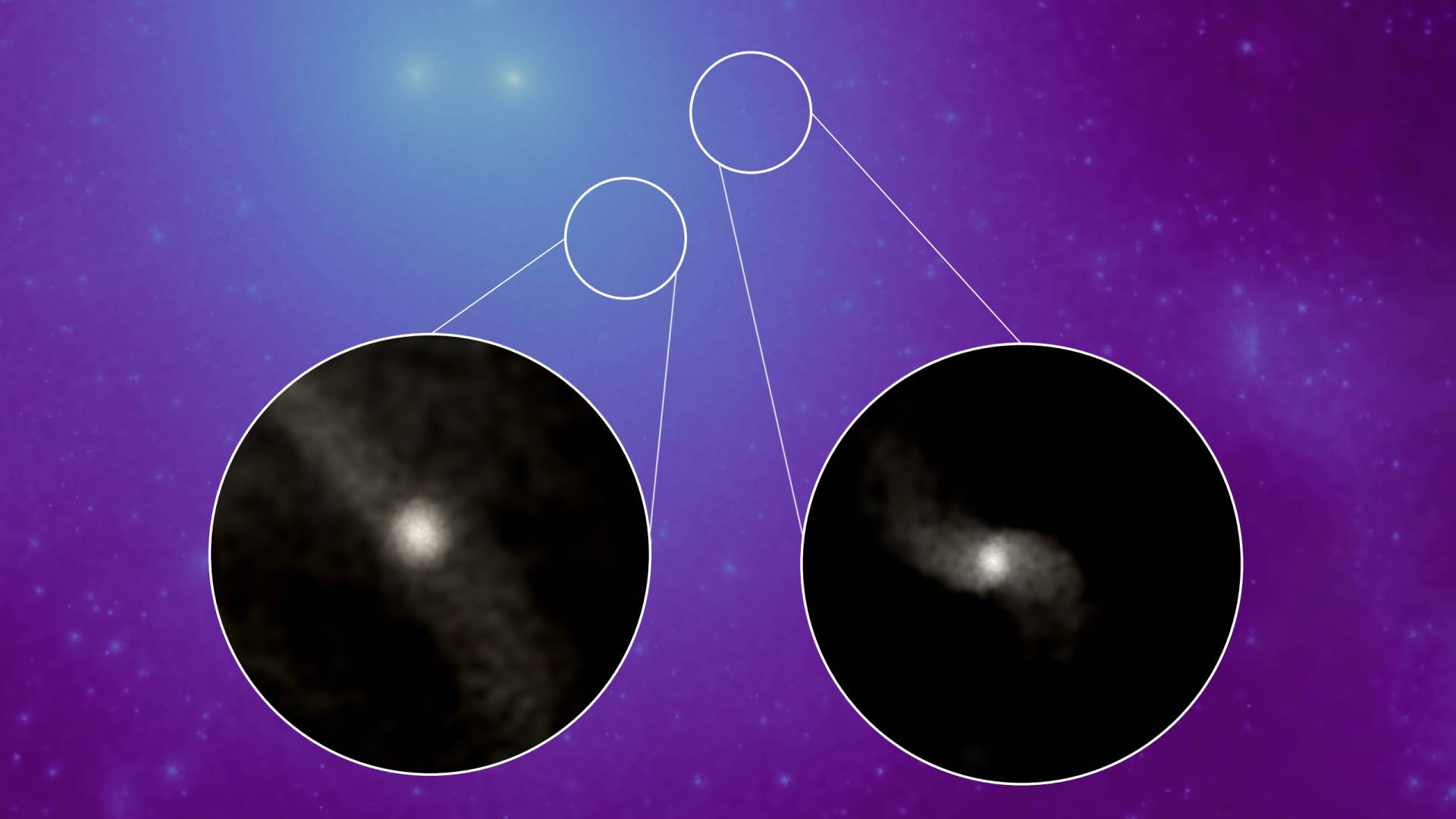 This image from a new computer simulation shows the dark matter distribution in a simulated galaxy group, with brighter areas showing higher concentrations of dark matter. The circles show close-up images of the stellar light associated with two galaxies lacking dark matter. If these galaxies had dark matter, they would appear as bright regions in the main image.

It started in 2018 when two astrophysicists — Shany Danieli, a NASA Hubble Fellow and Carnegie-Princeton Fellow in Princeton’s Department of Astrophysical Sciences, and Pieter van Dokkum, a professor of physics and astronomy at Yale University — observed two galaxies that seemed to exist without most of their dark matter.

“We were expecting large fractions of dark matter,” said Danieli, who’s a co-author on the latest study. “It was a complete surprise.”

That find, which Danieli and van Dokkum reported on in a Nature paper in 2018 and several followup articles, threw the galaxies-need-dark-matter paradigm into turmoil, potentially upending what astrophysicists had come to see as a standard model for how galaxies work.

“It’s been established for the last 40 years that galaxies have dark matter,” said Jorge Moreno, an astronomy professor at Pomona College who’s the lead author of the new paper. “In particular, low-mass galaxies tend to have significantly higher dark matter fractions, making Danieli’s finding quite surprising. For many of us, this meant that our current understanding of how dark matter helps galaxies grow needed an urgent revision.”

To that end, the team ran computer models that simulated the evolution of a chunk of the universe — one about 60 million light years across — starting soon after the Big Bang and running all the way to the present.

In their model, the team found seven galaxies devoid of dark matter. After several collisions with neighboring galaxies 1,000 times more massive, they were stripped of most of their material, leaving behind nothing but stars and some residual dark matter.

“It was pure serendipity,” said Moreno. “The moment I made the first images, I shared them immediately with Danieli, and invited her to collaborate.”

“It was mind-blowing,” said Danieli. “Not as mind-blowing as the real universe, but seeing the dark matter-free galaxies in the simulation surely brought up a lot of excitement. What’s really cool is that the simulation wasn’t designed in any way to generate these dark matter deficient galaxies, but when Jorge carefully searched through the simulation data, he found seven! Seven galaxies that seem to lack their dark matter. This is the first time that anyone saw it in this type of simulation. The findings also provide interesting predictions which we hope to further test observationally.”

Robert Feldmann, a professor at the University of Zurich who designed the new simulation, said that “this theoretical work shows that dark matter-deficient galaxies should be very common, especially in the vicinity of massive galaxies.”

James Bullock, an astrophysicist and professor at the University of California-Irvine who’s a world-renowned expert on low-mass galaxies, described how he and the team didn’t build their model just so they could create galaxies without dark matter — something he said makes the model stronger because it wasn’t designed in any way to create the collisions that they eventually found. “We don’t presuppose the interactions,” said Bullock.

Confirming that galaxies lacking dark matter can be explained in a universe where there’s lots of dark matter brought a sigh of relief for researchers like Bullock, whose career and everything he’s discovered therein hinges on dark matter being the thing that makes galaxies behave the way they do.

“The observation that there are dark matter-free galaxies has been a little bit worrying to me,” said Bullock. “We have a successful model, developed over decades of hard work, where most of the matter in the cosmos is dark. There is always the possibility that nature has been fooling us.”

But, Moreno said, this new model confirmed that “you don’t have to get rid of the standard dark matter paradigm.”

That standard cosmological model, including the importance of dark matter, was developed in large part by Jeremiah Ostriker, the Charles A. Young Professor of Astronomy on the Class of 1897 Foundation, Emeritus, with James Peebles, Princeton’s Albert Einstein Professor of Science, Emeritus and an emeritus professor of physics who won the 2019 Nobel Prize in physics for his foundational cosmology work.

Now that astrophysicists know how a galaxy might lose its dark matter, Moreno and his collaborators hope the findings inspire researchers who look at the night sky to look for real-world massive galaxies they might be in the process of stripping dark matter away from smaller ones.

“It still doesn’t mean this model is right,” Bullock said. “A real test will be to see if these things exist with the frequency and general characteristics that match our predictions.”

As part of this new work, Moreno, who has Indigenous roots, received permission from Cherokee leaders to name the seven dark matter-free galaxies found in their simulations in honor of the seven Cherokee clans: Bird, Blue, Deer, Long Hair, Paint, Wild Potato and Wolf.

“I feel a personal connection to these galaxies,” said Moreno, who added that, just as the more massive galaxies robbed the smaller galaxies of their dark matter, “many people of Indigenous ancestry were stripped of our culture. But our core remains, and we are still thriving.”

Finding the first galaxies lacking dark matter, and now finding a possible way to form them, brings scientists “one step closer to answering what is to me the most interesting and important question in astronomy and astrophysics today: What is dark matter?” said Danieli.