Christian Potter and Claire Wayner have been named co-winners of the 2022 Moses Taylor Pyne Honor Prize, the highest general distinction conferred on an undergraduate. They will be recognized at Alumni Day on campus Saturday, Feb. 19.

The Pyne Honor Prize, established in 1921, is awarded to the senior who has most clearly manifested excellent scholarship, strength of character and effective leadership. Previous recipients include U.S. Supreme Court Justice Sonia Sotomayor and the late Princeton President Emeritus Robert F. Goheen.

Potter, from McLean, Virginia, is concentrating in the School of Public and International Affairs (SPIA). He served as president of the Undergraduate Student Government (USG) from February 2021-22, working tirelessly to support students through the many challenges of the COVID-19 pandemic.

“The true honor of receiving the Pyne Prize is the reminder of the support I’ve received from professors, administrators, advisers, classmates, friends and family members throughout a tumultuous yet thrilling four years at Princeton,” Potter said. “One of the beautiful things about Princeton is that so many joyful moments here are inherently shared by many, and to me the Pyne Prize is no exception.”

Associate Professor of Psychology and Public Affairs Emily Pronin said Potter has been an exceptional leader on campus, and a thoughtful and diligent advocate for his peers.

“Christian is amazing — he is intellectually curious, humble, committed, internally motivated, outgoing, compassionate and mature,” Pronin said. “He is the type of student who one can imagine succeeding at whatever they choose to pursue.”

Potter said “empathetic but policy-driven leadership” was his mission as student body president. “At the beginning of my term, I promised the student body that we would address the most pressing issues of our current circumstances and work to effect long-term change, that it wasn’t one or the other. I believe we worked hard to deliver on that promise,” he said.

During the spring 2020 semester, when undergraduate instruction moved online, Potter worked with the Office of the Dean of the College in his prior capacity as USG academics chair to temporarily modify the grading policy for students dealing with disparate home learning situations.

“Christian served as the USG president during a particularly challenging time,” said Deputy Dean of Undergraduate Students Thomas Dunne. “He was a wonderful partner in navigating the shifting landscape of the pandemic, and was often able to equally hold both the wishes of the students and the needs of the institution in balance as we worked through issues.”

Before his role as president, Potter served as USG academics chair and in other student government capacities. He also was chair of the Whig Party for the American Whig-Cliosophic Society, the nation’s oldest collegiate debating society. He is a peer academic adviser in Mathey College, treasurer for the club tennis team, a fellow at the Center for International Security Studies and an Orange Key tour guide.

Potter has interned in Congress, including for the House Democratic Caucus and U.S. Rep. Steny Hoyer. He was also a research intern at The Brookings Institution, where he worked on studies examining how the pandemic affected operations in the House of Representatives and co-authored a paper on Federal Reserve independence.

Potter’s senior thesis examines the budget reconciliation procedure that fast-tracks legislation in the Senate. He is exploring how reconciliation has diverged from its originally established purposes and how that development impacts a wide array of policy issues today. He hopes this research will expand the collective understanding of how rules and procedures shape policy via institutional pathways.

His thesis adviser, Julian Zelizer, the Malcolm Stevenson Forbes, Class of 1941 Professor of History and Public Affairs, said: “Christian has the ability to bring the analytical tools of political science to help analyze public policy. He stands well above even the very best; he has the kind of intellectual skills and engagement that professors are always hoping to encounter.”

Potter has also worked as a research assistant for SPIA and Department of Politics faculty, conducting research at the National Archives in Washington D.C., and he spent a summer as a business analyst intern at McKinsey & Company.

After graduation, he plans to return to McKinsey’s Washington, D.C., office and work on projects that improve government operations at the federal and state levels. He hopes to eventually study law and work on legal and policy issues at the federal level. 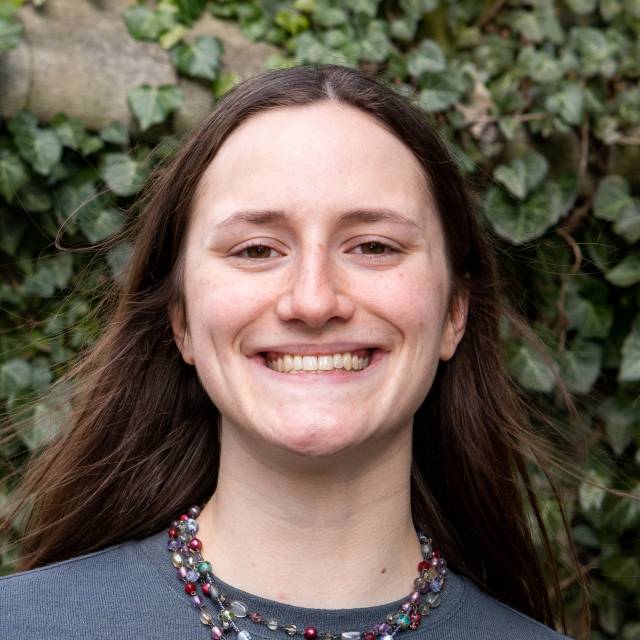 Wayner, from Baltimore, Maryland, is a civil and environmental engineering concentrator pursuing certificates in environmental studies and sustainable energy.

She is a member of Phi Beta Kappa and Tau Beta Pi, a two-time recipient of Princeton’s Shapiro Prize for Academic Excellence and a recipient of the George B. Wood Sophomore Legacy Prize. She has also received the Truman Scholarship for public service and the Udall Scholarship for environmental leadership.

“Through her academic work, public service and leadership activities, and by observing Claire in class, it is clear to me that she is the best of Princeton University,” said Gabriel Vecchi, professor of geosciences and director of the High Meadows Environmental Institute (HMEI).

Wayner’s time at Princeton has been dedicated to what she calls “solutions-oriented sustainability.”

“I apply this approach to both my academic and extracurricular work because humanity is in a dire position due to climate change, and I see my life’s work as trying to fix that,” she said. “This is why I chose to major in environmental engineering: because I love the solutions-based mindset that we engineers use to study and attempt to heal our planet. This is why for the past three years I’ve been doing research as part of Princeton’s Net-Zero America Project: because I want my research to be as focused as possible on what can be done.”

For her senior thesis, Wayner is conducting research related to the implementation of bioenergy as a sustainable, low-carbon energy resource as an extension of her work on the Net-Zero America project. Her research contributes to the goal of mapping out detailed routes for the United States’ transition to a carbon-neutral future.

Her senior thesis adviser, Jesse Jenkins, said Wayner is “brilliant, mature and dedicated to using her talents to accelerate the transition to a more sustainable energy system.” Jenkins is an assistant professor with a joint appointment in mechanical and aerospace engineering and the Andlinger Center for Energy and the Environment, and co-leads the ZERO Lab where Wayner has conducted research since 2020.

On campus, she has been a leader of many environmental organizations, having served as president of the Princeton Student Climate Initiative, worked as an EcoRep for the Office of Sustainability, and established the Undergraduate Student Government’s first sustainability committee. A keen outdoor enthusiast, she is the co-founder of the Princeton Birding Society, the captain of the Princeton Climbing Team and an Outdoor Action trip leader.

She has also volunteered in Peru through Engineers Without Borders, written for the Daily Princetonian as an opinion columnist, and is currently a dormitory assistant in Spelman Hall and a BSE interactor, providing support to undergraduates considering engineering majors. She is a member of Forbes College.

“In everything she has been involved with, she is a quiet force that has helped Princeton be better,” said Outdoor Action Director Rick Curtis. “It is people like Claire who give me confidence that we can take on the global challenges that we face.”

After graduating, Wayner will be working on clean energy policy development at RMI, an environmental nonprofit in Boulder, Colorado. She looks forward to continuing to be an advocate for sustainability and to “drawing on the lessons of collaboration and persistence that my time at Princeton has taught me.”

To learn more about Wayner and Potter, listen to their respective episodes on the Office of Admission's Meet Princeton! podcast.