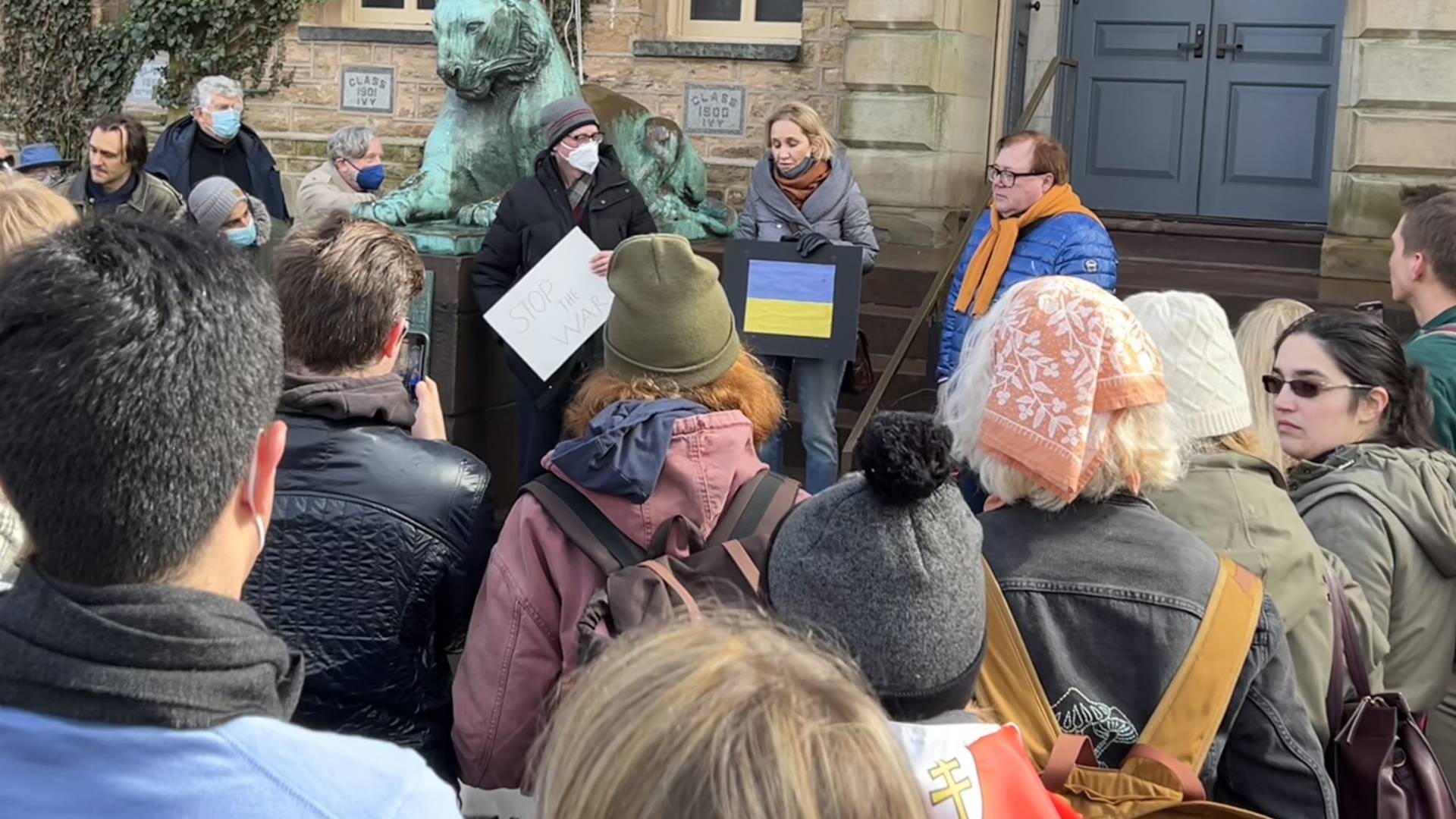 On Feb. 25, the day after Russia invaded Ukraine, a rally in solidarity with Ukraine was staged outside Nassau Hall and attended by faculty, staff and students.

As the Russian attack on Ukraine persists, Princetonians are showing their support for Ukraine, its citizens and those impacted by the conflict here and abroad. Through statements, rallies, fundraisers, direct aid, pledging acts of kindness and sponsoring displaced scholars, the Princeton community is finding myriad ways to be of service.

On Feb. 28, Princeton President Christopher L. Eisgruber issued a formal statement on the war in Ukraine on his blog.

“Like so many others in the Princeton community and throughout the world, I am deeply distressed by the unjust invasion of Ukraine for many reasons: because of the horrible suffering that it has unforgivably inflicted; because of its blatant, wrongful violation of Ukrainian sovereignty; and because of the damage it has done to international principles fundamental to peace and human rights throughout the world,” he wrote.

Eisgruber updated his post thanking the Department of Homeland Security for designating Ukraine for Temporary Protected Status for the next 18 months. “I am grateful for this step and hope the [Biden] Administration will consider additional flexibility for Ukrainian students and scholars currently in the United States,” he wrote.

In the weeks since the conflict began, Princetonians have taken actions that range from supporting displaced Ukrainians and cities under siege to lining up the emotional appearance of the Ukrainian Chorus Dumka of New York on Saturday Night Live, and much more. The John H. Pace Jr. ’39 Center for Civic Engagement also has offered its guidance for those organizing support efforts.

On Feb. 25, the day after Russia invaded Ukraine, a rally in solidarity with Ukraine was staged outside Nassau Hall. “We organized one of the first anti-war rallies on an American campus,” said Ekaterina Pravilova, the Rosengarten Chair of Modern and Contemporary History, professor of history and acting director of the Program in Russian, East European and Eurasian Studies.

Pravilova organized the event along with Igor Khristoforov, senior research scholar and lecturer in history; Ilya Vinitsky, professor and chair of Slavic languages and literatures; and Carole Dopp, manager of global initiatives for the Princeton Institute for International and Regional Studies.

“Now it’s time to work,” Pravilova said. “What else can we do? Educate our students and the public because not everything gets into the news.”

Faculty, staff, students and alumni have been lending their expertise, offering perspectives and insights in op-eds, on television and cable news programs, online and in print publications, on virtual panels and across social media. Livestream and recorded expert panel discussions on the global, economic, financial, cyber and humanitarian dimensions of the war are available on Princeton’s YouTube channel.

The University will offer support to departments that would like to sponsor a scholar from Ukraine or Russia, said Aly Kassam-Remtulla, associate provost for international affairs and operations. Many Russians are also suffering as a result of the war and are in need of assistance, especially if they are brave enough to speak out against the actions of their government, Kassam-Remtulla said.

Departments will be able to host and fund scholars. The Davis International Center will assist with visa procurement and work with the Office of the Dean of the Faculty to ensure requests are fast-tracked.

“We look forward to doing our part in helping Ukrainian scholars and others displaced by the war and any immediate family that make their way to the U.S.,” said Albert Rivera, director of the Davis International Center.

Céleste Pagniello, a Canadian first-year Ph.D. student in musicology at Princeton who has lived in Russia and Belarus and who has visited Ukraine many times, is putting her language skills to use. She and about 20 other Princeton students are offering translation services to displaced people through Respond Crisis Translation, which provides interpretation and translation services for migrants and refugees. 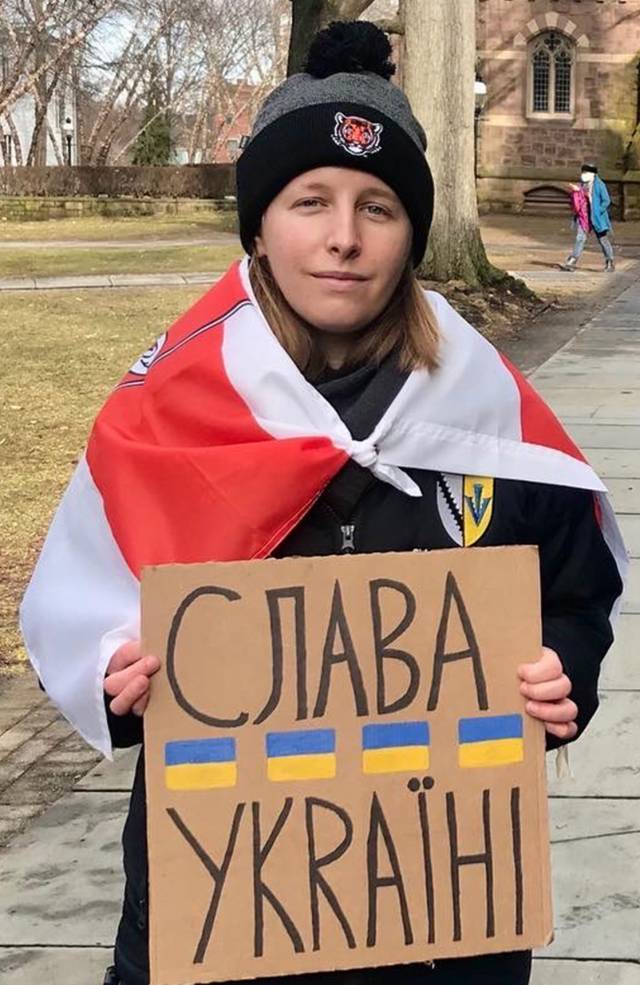 Céleste Pagniello, a Canadian first-year Ph.D. student in musicology who has lived in Russia and Belarus and who has visited Ukraine many times, has been active in several initiatives to support Ukraine. She attended the Feb. 25 rally at Princeton, holding a sign that reads “Glory to Ukraine,” a popular rallying cry, in Ukrainian.

Through the Center for Jewish Life and OU Jewish Learning Initiative on Campus at Princeton (OU-JLIC), Princetonians are supporting communities across Ukraine.

In Kyiv, the support was sent directly to a Jewish old age home that became a sanctuary from the violence and is providing services to those who are unable to leave, especially to those who are elderly and frail. In Lebov, the support was used to purchase generators which became a grave need. Assistance has been given to escort eight children with autism out of the country, and support also has been given to Polish families who took in children.

The effort has been organized by Rabbi Matityahu Kahn and Shira Kahn, co-directors and torah educators of OU-JLIC.

“Immediately when the war began, we sent out a message to our community to cultivate awareness, responsibility and empathy to the situation and a call to come together in a prayer for peace,” said Shira Kahn. “As the situation continued to deteriorate, and the depth of tragedy and need started to unfold, we knew we needed to do more. This is not the first scenario of crisis we are responding to as a community, so we quickly tapped into the existing OU-JLIC network to channel donations and efforts directly to where it was needed.”

“The value of human life and unity in Judaism play into action immediately in situations like this,” said Rabbi Kahn. “We sent out this call to our community and got immediate responses and contributions that continue to come in. Unfortunately, the need remains great, and so we will continue to collect and channel these efforts as needed. Our network works with organizations on the ground which allows us to respond to immediate needs quickly.”

Donations totaling more than $1,100 from the Princeton community alone joined a wider campaign which already has raised $35,000 to support the various and ongoing needs.

Princetonians looking for other opportunities to show support can sign a letter of solidarity, sponsored by the Program in Russian, East European and Eurasian Studies, and the Department of Slavic Languages and Literatures.

Supporting the arts and artists

When the Russian invasion began, the Ukrainian Contemporary Music Festival in New York City almost immediately lost its funding from its primary sponsor, the Ukrainian Institute in Kyiv, which redirected the money to the crisis.

Musicology Ph.D. student Pagniello, who is the social media manager for the festival, reached out to Simon Morrison, professor of music and Slavic languages and literatures and director of the Fund for Canadian Studies, to see if the University could help make up the difference.

Morrison, together with the Program in Canadian Studies and the Department of Music, stepped up. The festival will be held as scheduled from March 18-20 in New York. Morrison said there also will be a performance by the artists at Princeton this spring.

“We firmly believe that now is not the time to let Ukrainian culture disappear, especially in the wake of [Russian President Vladimir] Putin’s comments that Ukraine does not have its own culture and is not a real country,” Pagniello said. “What we’re doing is bringing visibility to this culture, this very rich musical tradition that most people simply do not know about.”

She added, “Even showing up to these concerts is an act of solidarity.”

Pagniello’s involvement with the Ukrainian Contemporary Music Festival brought another unexpected response to the crisis. She helped to coordinate the appearance of the Ukrainian Chorus Dumka of New York on Saturday Night Live on Feb. 26.

“It was a beautiful moment,” she said. “I’m very proud that UCMF was a part of that because, again, it’s these small things that we can do.”

Given the enormity of the crisis and its distance from Princeton, some might find it difficult to know exactly what to do, but there are many ways of being in service in times such as these, said Rabbi Eitan Webb, chaplain and director of the Scharf Family Chabad House at Princeton. 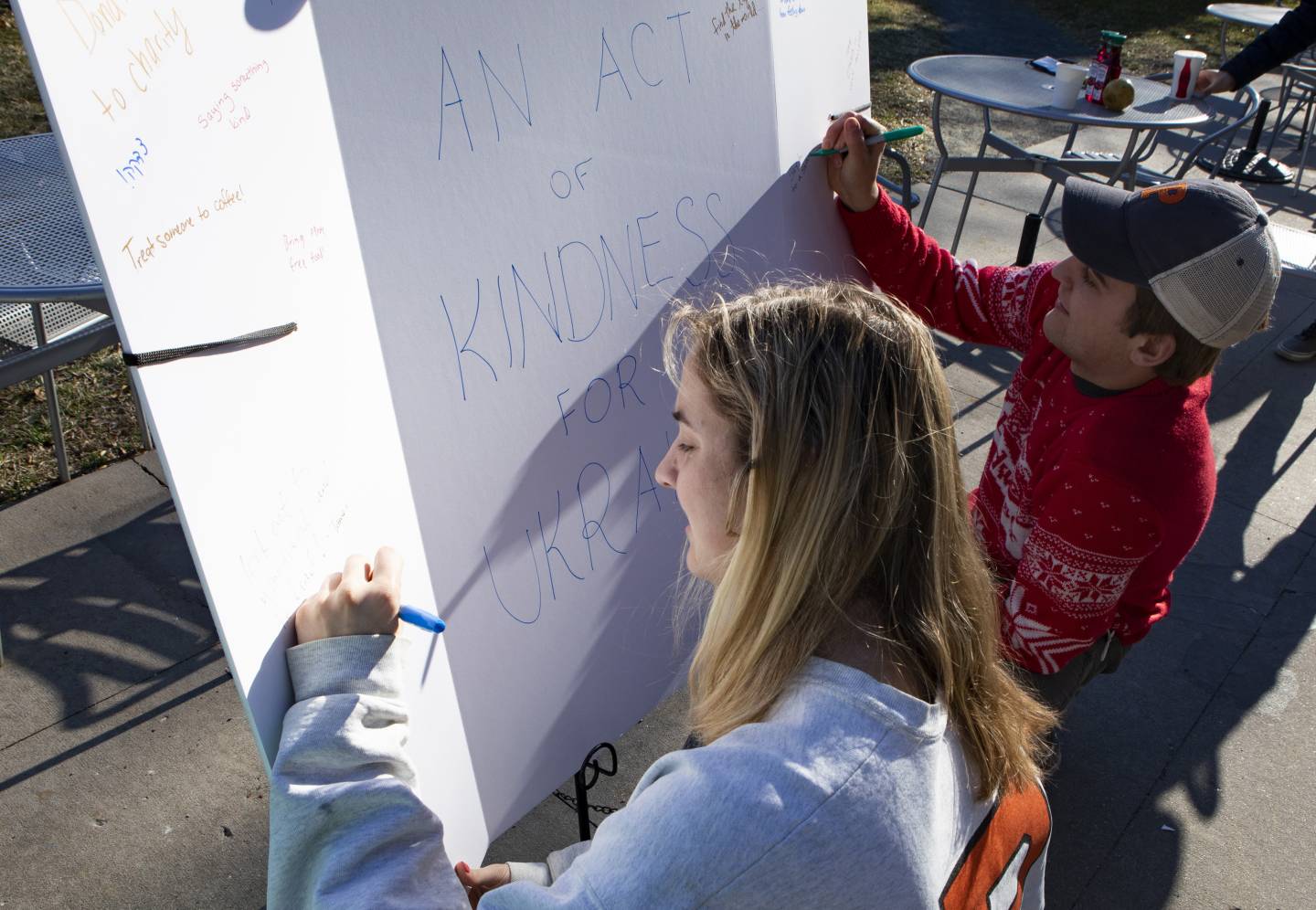 Chabad at Princeton set up a posterboard outside Frist Campus Center on March 2 and asked passersby to pledge an act of kindness in support of Ukraine. Connie Nelson (left) and Stephen Padlo (right), both Class of 2025, were among the dozens of Princetonians who made pledges.

To that end, Chabad set up a posterboard outside Frist Campus Center on March 2 and asked passersby to pledge an act of kindness in support of Ukraine. In return, they received a serving of soup prepared by Gitty Webb, co-director of the Scharf Family Chabad House, who made 75 containers for the event.

“We read the history books about the paralysis of nations, and you kind of get it – it’s not that there’s so much of a paralysis as you don’t know what to do, and so you don’t end up doing anything,” Rabbi Webb said. “But by saying, ‘OK, here’s a really tiny little corner where I can help, and it’s not going to solve the problem, but there are people who can be helped,’ it’s easier to process.”

Among the kind acts pledged by students were saying hello to strangers, donating to a charity, and checking in on friends and family.

“There’s so much negativity, in general, in the world,” said Jacob Katz, president of the Chabad Student Board. “A nice way to combat negativity is with positivity. It might do some good on a grander scale. With an initiative like this, you get the ball rolling.”

Chabad is also making a bulk purchase of handmade shmura matzo for Passover – matzo that is kept under supervision from the time the wheat is harvested – to support a Jewish bakery in Dnipro, Ukraine. The bakery produces over 100 tons of matzo each year and is preparing to reach that goal this year as well, even while under siege, Rabbi Webb said.

The matzo can be purchased for $25 per pound through a link on the Chabad website. Rabbi Webb noted that in the event that the matzo does not arrive in time, the funds will be distributed to the Dnipro community to be used for their Passover needs.

How to organize a response

For those wishing to respond to the Ukrainian situation as it unfolds, the John H. Pace Jr. ’39 Center for Civic Engagement offers resources for responding appropriately and most effectively.

Each event or action at the local, national or international level brings with it unique circumstances, pressures and opportunities, and impacts communities and individuals in different ways.

Pace Center staff members are available to advise individuals and groups about how to join existing response efforts, raise funds, choose a relief organization, hold a vigil or protest, and more. Visit the Pace Center’s How to Organize a Response resource page, for more details.

‘It’s about surviving. It’s about continuing our work.’