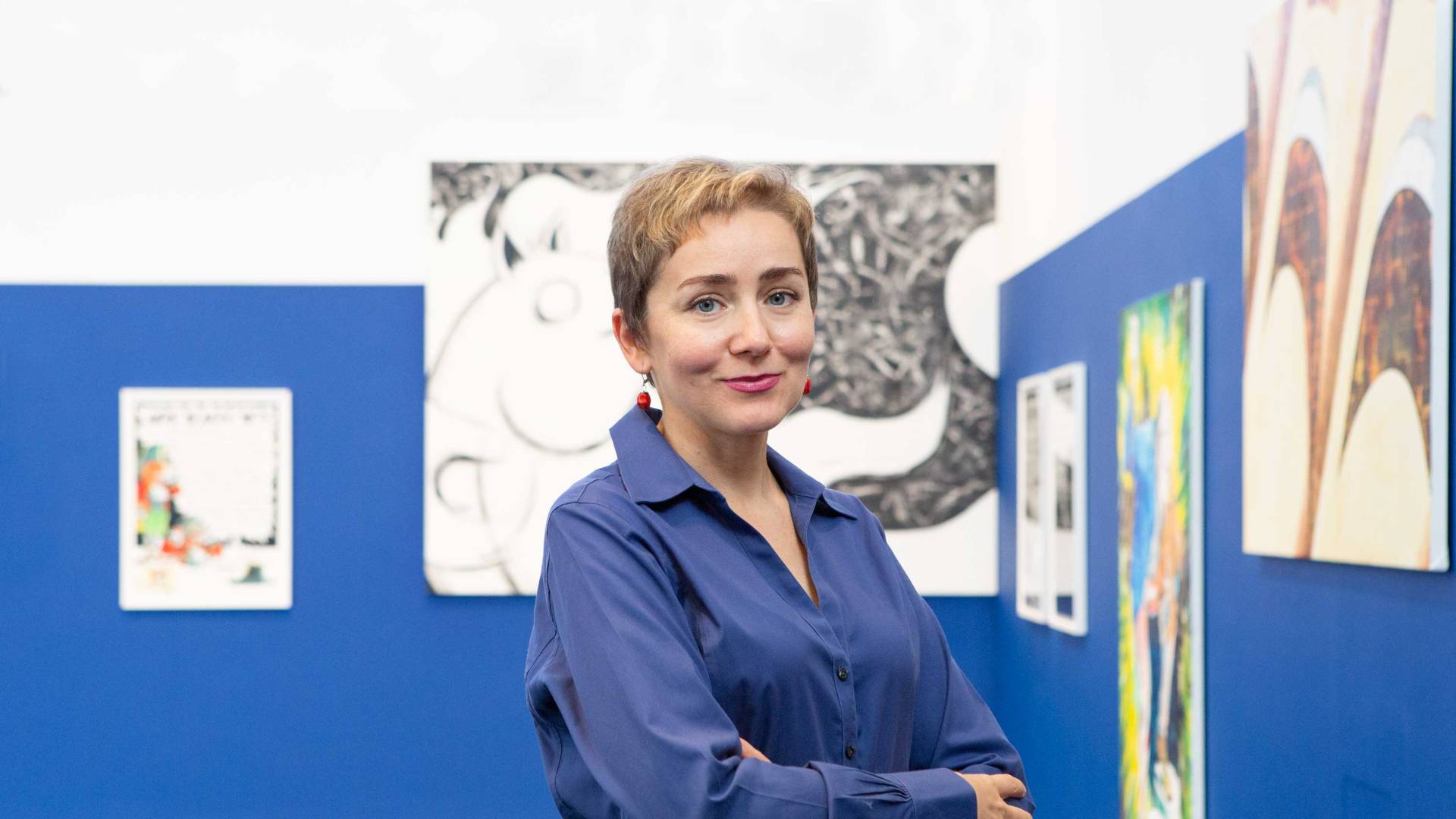 ‘It’s about surviving. It’s about continuing our work.’

Huddled with her mother beneath old blankets and broken furniture in a basement in Chernihiv in northern Ukraine, under siege by Russian troops and with bombs exploding on the residential streets outside, Yana Prymachenko felt the eerie resonance of her World War II scholarship.

Prymachenko is a Ukrainian historian of Eastern Europe, World War II and the Holocaust. “I have read a lot about this,” she said. “Now I also have this real experience. I’ve read the diaries of people who survived the war in World War II, and I knew exactly what was going on.”

After 10 days in Chernihiv — which was besieged by Russian troops almost immediately after Russia’s Feb. 24 invasion of Ukraine — and five harrowing days living in a neighbor’s basement to avoid Russian shelling, Prymachenko and her mother escaped, finding safety in Poland. Concerned primarily with her survival, Prymachenko did not know at the time how she would continue her scholarly pursuits as a senior researcher for the Institute of the History of Ukraine, part of the National Academy of Science of Ukraine.

Fortunately, Prymachenko had friends in Poland who helped her and her mother get settled. Then one told Prymachenko about Princeton University’s efforts to provide scholars like herself with safety, stability and an academic home amidst the war and persecution resulting from the invasion.

“I was suggested to this position in Princeton — it was incredible,” she said. “I said, ‘Wow, what do I need to do?’”

This fall, the University invited Prymachenko and 13 other at-risk scholars from Ukraine and Russia to Princeton, each for a one-year appointment.

“Princeton has a long history of supporting displaced scholars,” said Aly Kassam-Remtulla, vice provost for international affairs and operations. “As a university blessed with significant resources, it is an honor to be able to provide these opportunities and a safe harbor.”

The visiting scholars are being hosted by academic units and departments including Slavic languages and literatures, Princeton School of Public and International Affairs, Liechtenstein Institute on Self-Determination, and University Center for Human Values. Also offering support are the economics, philosophy, politics and history departments, Humanities Council, Judaic studies, Princeton University Library, and Seeger Center for Hellenic Studies, among others.

In addition to providing for their physical safety and comfort — including living arrangements for the scholars and their families — the University is supporting the scholars in their work, offering resources that will allow them to move forward in their lives and careers.

“In the short term, Princeton is a place to land amidst the chaos, confusion and unimaginable stresses these scholars face,” Kassam-Remtulla said. “In the longer term, we hope to help them think through what the next part of their journey looks like.”

The initial call for support for Ukrainian and Russian scholars originated with Princeton faculty in the Program in Russian, East European and Eurasian Studies, not long after the Russian invasion of Ukraine began.

Several faculty members, including Ekaterina Pravilova, Iryna Vushko, Ilya Vinitsky and Kim Scheppele, helped to identify scholars who were imperiled and who also would be a good fit to bring to Princeton.

The next step was to find departments that could take them on. In some cases, multiple departments or academic units came together to provide the necessary funds. The Davis International Center then aided with visa procurement, working with the Office of the Dean of the Faculty to fast-track the requests.

A steering committee chaired by Nadia Crisan, executive director of the Liechtenstein Institute on Self-Determination, with vice chair Regin Davis, assistant director of the University Center for Human Values, has been working through the practicalities of bringing the scholars to campus and ensuring that their day-to-day needs are met.

“We’ve been involved with everything from funding to visas to housing to integration to mentorship once they arrived,” Crisan said. “A year, which is the typical appointment for each scholar, will go very fast. We want to give them roots here at Princeton for as long as it’s possible, but also give them wings to move forward.”

A history of providing shelter for at-risk scholars

Princeton’s support for at-risk scholars can be traced back to the 1930s, when Oswald Veblen, a mathematics professor, lobbied the University administration to bring Jewish scholars persecuted by the Nazis to Princeton. Some joined the Princeton University faculty. Others, including Albert Einstein, were among the inaugural professors at the Institute for Advanced Study, which was initially housed in the University’s former Fine Hall.

Princeton has supported other academics fleeing war and violence in their home countries, or those considered “at risk,” including scholars recently arrived from Afghanistan and also from Puerto Rico following the devastation of Hurricane Maria.

The cohort of Ukrainian and Russian academics that arrived this fall is believed to be the largest at any Ivy League institution. Princeton has assisted these visitors with necessities, including housing. At least nine of the scholars arrived with families and have required help locating schools and childcare.

“We tried to think about everything from who is going to take them shopping after they moved into their place, to what churches they can attend, to what community services they could access,” Crisan said.

Getting settled has been a challenge for some. Obtaining a credit card when you have no credit score is no simple feat, for instance. “Those are annoying things that you have to deal with,” said Greg Yudin, a Russian national and an associate professor in economic sociology at the Higher School of Economics in Moscow.

Those irritations of adjusting to life in a new country, however, are mundane in comparison to Yudin’s experience as a scholar in his home country. 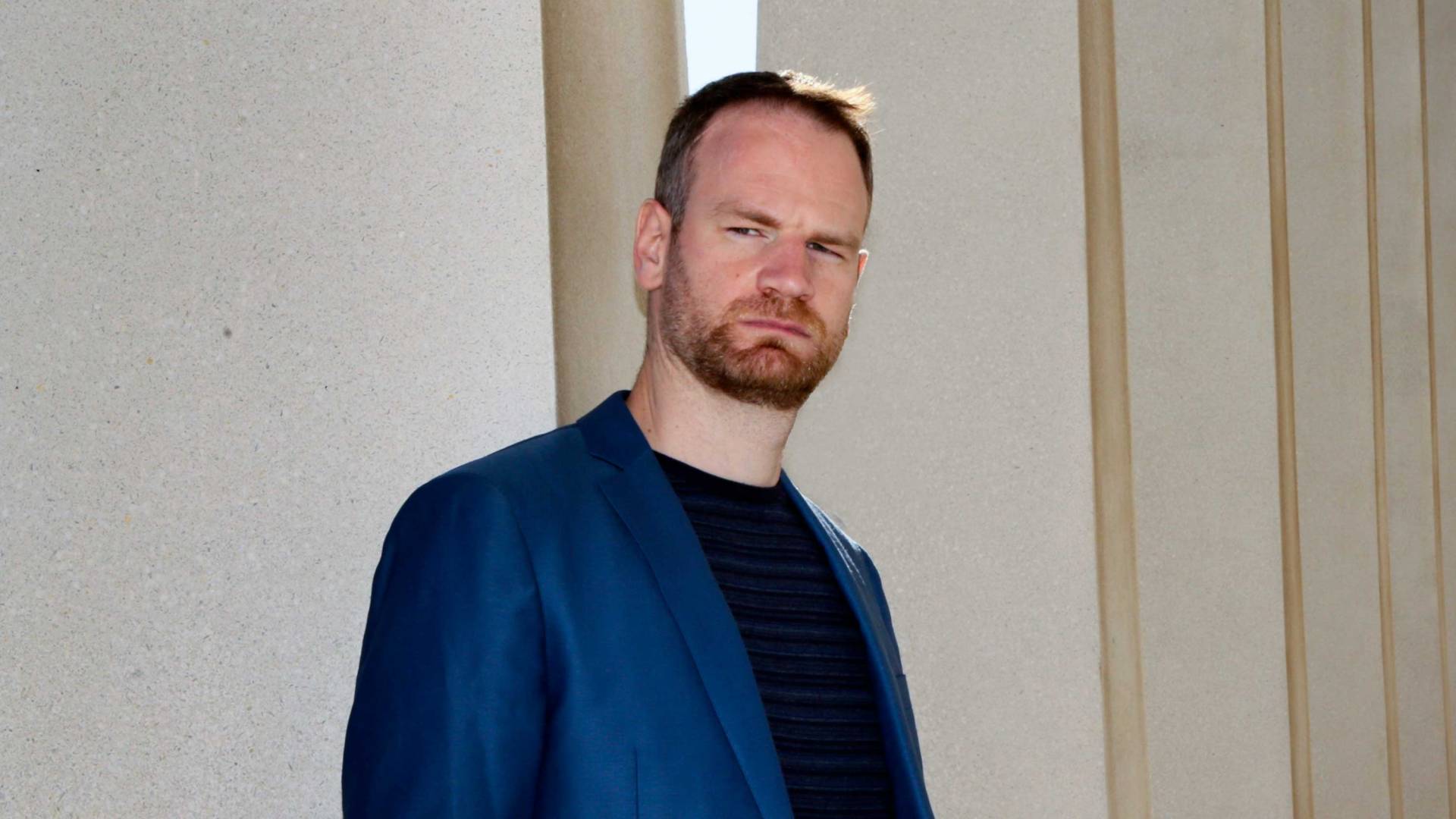 Greg Yudin, a Russian political scholar, is completing a second Ph.D. while visiting Princeton. Yudin said he is grateful to have the opportunity to work in "a very favorable academic environment."

Earlier this year, Yudin, who also is a professor and head of the master’s program in political philosophy at the Moscow School of Social and Economic Sciences, was injured by police at a protest opposing the war in Ukraine. In March, after the war began, he also learned Russian investigators sought information about him from his university simply for being a political scholar. Yudin said his local prosecutor’s office asked about financial transactions made by him and his colleagues and wanted to know the names of any guests they invited to the university.

“It’s incomprehensible to have to live like that constantly, or even sometimes,” Yudin said.

Yudin is using his time at Princeton to complete a thesis for a second Ph.D. in politics at The New School. He said he has been especially grateful for the attention and support he has received from Scheppele, the Laurance S. Rockefeller Professor of Sociology and International Affairs and the University Center for Human Values, who has taken time from her sabbatical to help him get settled on campus and to introduce him to her contacts.

“I really feel like my brain has started working again in this very favorable academic environment,” Yudin said. “That’s thanks to all those people, and to Kim specifically, so I’m incredibly grateful to her. She’s a wonderful person.”

“Ideally, of course, I would love to come back to Russia and do something to repair and restore the country, restore the damage that was inflicted by these people,” Yudin added.

Iuliia Skubytska, a Ukrainian historian who was director of the War Childhood Museum in Kyiv when the war broke out, said she too hopes to use her time at Princeton to understand how better to serve her country in the future.

“Every Ukrainian person, we have a lot of work to do in figuring out how we recover,” said Skubytska, who is being hosted by the Program in Judaic Studies with support from the Humanities Council. “I see myself as an ambassador of my country, to the world, as a public intellectual. I consider myself responsible for helping people who cannot raise their voices to be heard and seen.”

As someone who has supervised the creation of an archive highlighting Ukrainian children’s experiences of the ongoing war in the country’s eastern portions, Skubytska was familiar with the trauma of those fleeing war and oppression. But learning to manage her own emotions has been a challenge, she said.

“They stole from me the future that I envisaged for myself, and that’s the feeling that makes me especially angry because it makes you feel very helpless,” she said.

Having completed her Ph.D. at the University of Pennsylvania in 2018, she had experience living in the United States and was able to reconnect with colleagues and friends upon her return. She also has found creative and physical outlets to help her cope with her emotions, whether playing piano, dancing or running.

This spring, Skubytska will teach an undergraduate course at Princeton on oral history and trauma, hoping to share with Princeton students how to best collect testimonies and communicate them to the wider public. In addition to teaching, she and the other scholars also have participated in numerous talks and panels examining Russian politics and propaganda and the war being waged against Ukraine.

Prymachenko, who appeared in October on a panel about Russian propaganda sponsored by the Liechtenstein Institute and will also conduct a Global History Seminar in March, said she hopes to help others to understand the true nature of the war against Ukraine. “If we lose this war, we stop to exist as a nation,” she said. “Some people believe we need to negotiate with Russia, but we can’t because of Putin’s irrational desire to destroy Ukraine at any price.”

For the Ukrainian scholars, having an academic home in the midst of war is also about preserving Ukrainian culture, language and science, and maintaining their country’s human capital, Prymachenko said. “It’s about surviving, it’s about continuing our work,” she said. 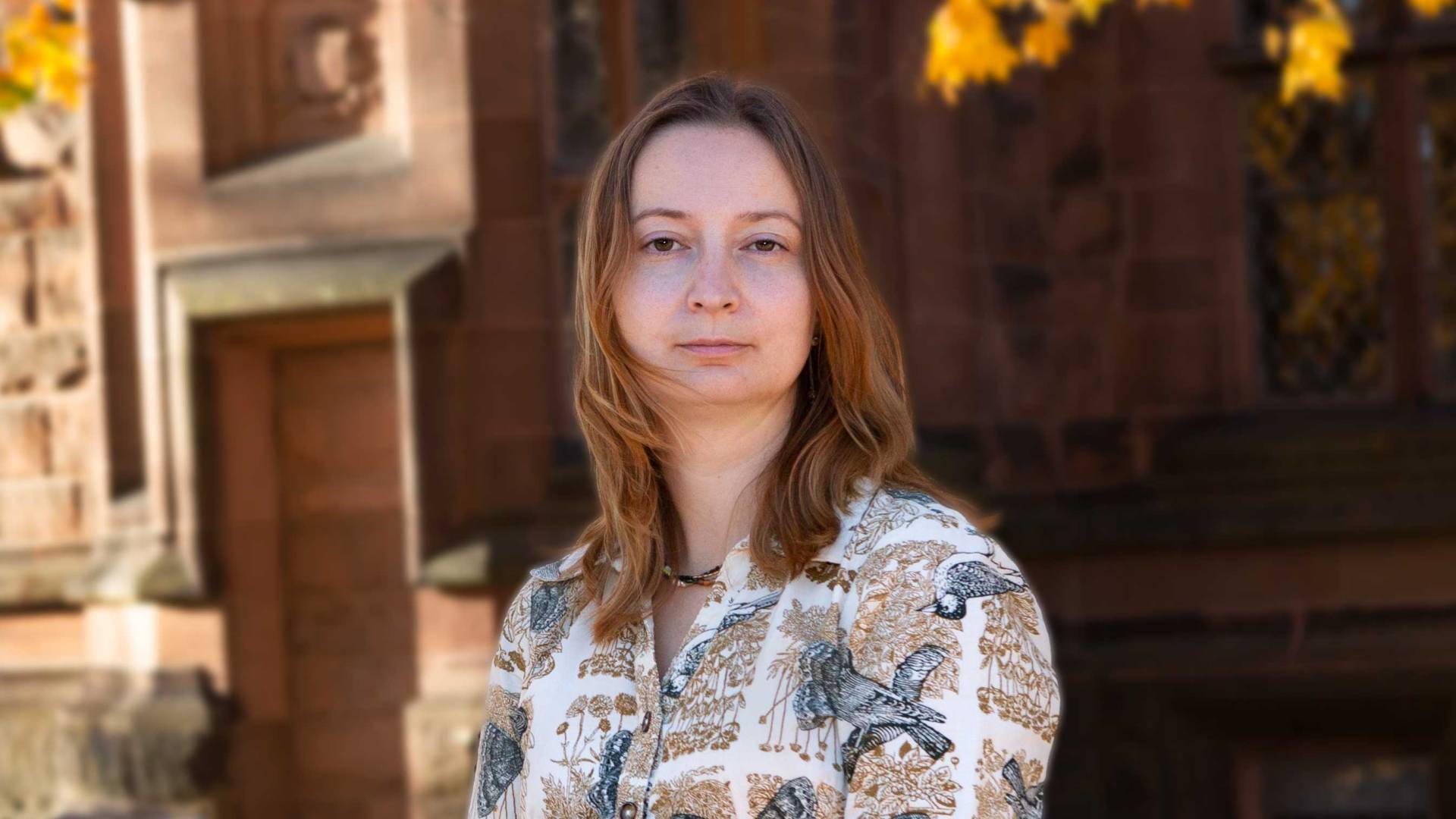 Iuliia Skubytska, a Ukrainian historian who was director of the War Childhood Museum in Kyiv when the war broke out, is teaching a spring undergraduate course at Princeton on oral history and trauma.

Moving past war and displacement

Each of the scholars is being mentored by a Princeton faculty member during their time on campus.

To assist the scholars in planning for their next steps, James M. Van Wyck, assistant dean for professional development at the Graduate School, is curating a mini curriculum based on the GradFUTURES professional development model and adapted from resources typically provided to Princeton graduate students entering the job market. Afghani scholars who arrived at Princeton since 2020, following the withdrawal of U.S. troops from their home country, also will participate.

They will learn how to adapt their CVs for American employment, write cover letters, prepare for campus visits and academic interviews, and adapt scholarly papers in English. They also will have one-on-one coaching as they seek their next academic appointment or careers beyond the academy.

For at least a year, they will have an opportunity to write, to publish, to teach and to take advantage of Princeton’s many resources, while contributing their rich knowledge to the scholarly community and academic experience at Princeton.

“Princeton is a place that attracts talent from around the world,” Kassam-Remtulla said. “This initiative is a version of that. There are incredibly gifted scholars being impacted by this war. It’s our responsibility to help them, and we also benefit greatly by having them as part of our intellectual community.”