Hildred Storey Geertz, professor of anthropology, emeritus, died peacefully at home in Princeton on Sept. 30. She was 95.

Geertz, who specialized in the study of social organization in relation to theory of culture and in the anthropology of art, joined Princeton’s faculty in 1971 and transferred to emeritus status in 1998. She was the University's first female department chair and third female tenured professor. 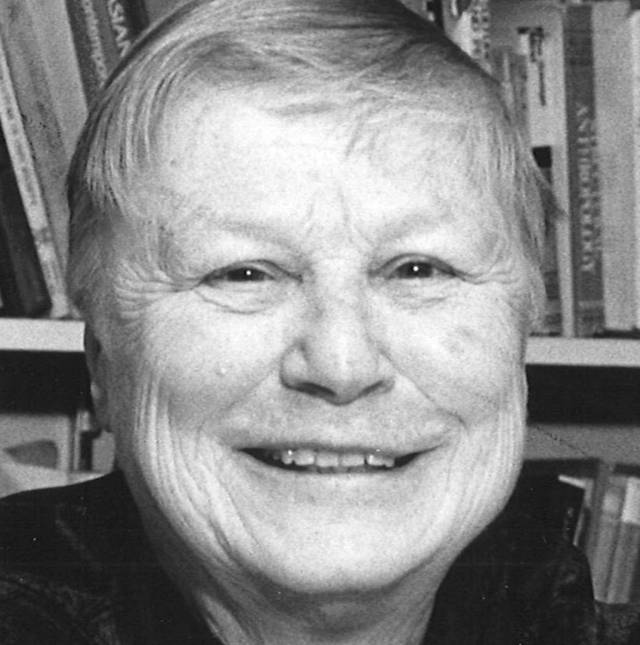 Photo courtesy of the Department of Anthropology

“‘Hilly,’ as she liked to be called, was a pathbreaking fieldworker and scholar of Balinese kinship, socialization and artistic imagination, and she was instrumental in building the Department of Anthropology at Princeton,” said João Biehl, the Susan Dod Brown Professor and department chair. “An incredibly accomplished scholar, Hilly was also an educator at heart. Even after becoming professor emerita, she remained very active in the department, engaging with colleagues and students — she was always generous with her time and ready to offer seasoned guidance on research design.”

Geertz spent her career steeped in the pursuit of understanding cultures in Java, Morocco and Bali. She focused her study on the interconnections between different Balinese art forms and how and why such forms have changed through time, as well as the effects of economic development and tourism on Balinese artistic endeavor.

Known for her exceptional scholarship and teaching, she also added a dash of humor to the administrative side of her time at Princeton. Serving as department chair from 1973 to 1978, and as acting chair from 1987 to 1988, she once compared the job to raising male ducks: "You get only squawks and no eggs."

Born in Queens, New York, on Feb. 12, 1927, Geertz grew up there and in Teaneck, New Jersey. She earned her bachelor’s at Antioch College in 1948 and her Ph.D. in social anthropology from Radcliffe College in 1956. She first became associated with Java — the first site of her pioneering ethnographic research — when offered a fellowship in her first year of graduate school.

Her field research there in 1952–54 resulted in the book “The Javanese Family” (1961, still in print and widely read in Indonesia). This research — which combined social observation, producing oral histories, studying documents and pursuing an exhaustive knowledge of the scholarly literature on the island of Bali — continued at intervals for several decades until 1995.

Biehl called Geertz’s trilogy on Balinese artistry “brilliant.” The culmination of years of study in the village of Batuan on Bali, which Margaret Mead and Gregory Bateson studied in the 1930s, the series includes “Images of Power: Balinese Paintings Made for Gregory Bateson and Margaret Mead” (1995); “The Life of a Balinese Temple: Artistry, Imagination, and History in a Peasant Village” (2004); and “Tales of a Charmed Life: A Balinese Painter Reminisces” (2005). Geertz’s fieldwork in Indonesia was also the basis for the book “Kinship in Bali” (1975, with her former husband Clifford Geertz), as well as scores of essays and papers.

In conjunction with the publishing of “Images of Power,” Geertz curated an exhibition of the same name, which traveled from the American Museum of Natural History in New York to museums in Australia and Japan, as well as to the James A. Michener Museum in Doylestown, Pennsylvania, and the Middlebury College Museum of Art in Middlebury, Vermont.

She also worked in Morocco in the 1960s and coauthored “Meaning and Order in Moroccan Society: Three Essays in Cultural Analysis” (1979), with Clifford Geertz and Lawrence Rosen, now the William Nelson Cromwell Professor of Anthropology, Emeritus, at Princeton.

Rosen, who taught at Princeton for 40 years until retiring in 2017, had been invited by Geertz to Morocco early in his academic career and remembers the meticulousness of her research process. “Hildred Geertz was a phenomenal fieldwork anthropologist,” he said. “Watching her interview people in Morocco, reading through her fieldnotes as she, Clifford Geertz and I prepared a book on our work in Morocco was to appreciate the care, insight and respect she displayed in all her contacts.”

Rosen continued: “Her books on Balinese art and life are among the most brilliant additions to our knowledge of her treasured island, and the devotion to her students and colleagues among the memories we who owe her so much will always cherish.”

In 2017, when Geertz was 90, her book “Storytelling in Bali” was published by the Dutch publishing house Brill.

Rena Lederman, professor of anthropology, remembers the generous support Geertz gave her when she joined the department at a time when the number of tenured women professors at the University was in the single digits. “I owe her an enormous debt for shepherding my tenure bid through to successful completion in 1989,” she said. “No small thing: as far as I know, no one had ever come up the ranks to achieve tenure in the Department of Anthropology before that. A tiny, tough-minded person, she was warm, welcoming and kind. She was also a deeply committed anthropological fieldworker who maintained longstanding relations of mutual respect with her key Balinese artist interlocutors.”

Jeffrey Himpele earned his Ph.D. in 1996 and returned to Princeton in 2007, first in leadership roles in the McGraw Center for Teaching and Learning and since 2016 as director of the VizE Lab for Ethnographic Data Visualization and a lecturer in Anthropology.

“For those of us who were anthropology graduate students in the 1990s, Hilly was our deepest connection to the best of our discipline’s heritage in cultural analysis. She had already produced her groundbreaking works on the broad significance of kinship and family by then, and you could see how they were influencing a number of doctoral dissertations and senior theses,” Himpele said. “At that time, Hilly was also pursuing new projects on visual culture in Bali. As a media anthropologist and filmmaker, I vividly recall her graduate seminar “The Anthropology of Art,” which took us inside the art worlds of Bali with remarkable nuance and theoretical potency.”

Only a month ago, Himpele and Carol Zanca, anthropology department manager, filmed an interview with Geertz at her home for a documentary on the history of the department, to celebrate the department’s 50th anniversary this year. “Hilly was as vibrant and engaged as always,” Himpele said. “Of course, we discussed her key role as the first female chair of the department, but she was beaming when we reminisced about all of her faculty colleagues and the students she had known.”

One of her earliest graduate advisees was Ruth Behar, who earned her Ph.D. in 1983 and is the James W. Fernandez Distinguished University Professor of Anthropology at the University of Michigan. Behar came to Princeton with a background in Spanish literature who at first struggled to find her direction as a graduate student.

“It was Hilly who constantly sought to show me that anthropology is a capacious discipline,” Behar said. “Through her passion for Balinese painting and storytelling, she convinced me that there was room in anthropology for those of us wanting to build bridges to the arts and write ethnographies poetically.”

Today, Behar teaches an ethnographic writing course, her version of a course Geertz taught at Princeton called “The Ethnographer’s Craft.” She added: “I too seek to show my students that anthropology is a capacious discipline, just as Hilly taught me. I urge them, most of all, to tap into their creativity and poetic selves, and not to be afraid to do so. I know Hilly will be looking over my shoulder as I teach and I will say thank you.”

Geertz is survived by her brother Warren Storey; her children, Erika Reading and Ben Geertz, and grandchildren Andrea and Elena Martinez. A celebration of her life will be announced at a future date.

Donations in her memory may be sent to the non-profit Princeton Senior Resource Center, 101 Poor Farm Rd., Building B, Princeton, NJ 08540.

View or share comments on a blog intended to honor Geertz’s life and legacy.