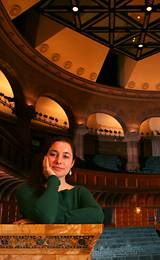 Senior Margaret Meyer is a professional-level opera singer who chose to major in comparative literature — a field in which she could combine her musical affinities, her aptitude for languages and her interest in literature.

“I love it because you aren’t confined to one department,” said Meyer, who came up with an unusual topic for her senior thesis that integrates music and literature. “The major is very much about what you want to do, so it’s hard to get bored.”

It’s difficult to imagine Meyer becoming bored. Since she was in high school, she has studied voice with Madame Thérèse Sevadjian, a member of the voice and opera faculty at McGill University in Montreal. She works with Sevadjian during school vacations, over the summer and during occasional visits home — she lives in Peru, N.Y., an hour south of the Canadian border — during the school year.

Meyer’s musical achievements at Princeton include singing the lead roles in the Chapel Choir’s production of Menotti’s “Amahl and the Night Visitors” and in the Princeton Opera Theater’s production of Cavalli’s “La Calisto.” She sings with the Chapel Choir and the Chamber Choir, and played cello in Sinfonia for two years. She is earning a certificate in vocal performance.

“Meg has a beautiful natural instrument, great pitch and a level of musicianship that would be expected in a more mature singer,” said Penna Rose, who conducts the Chapel Choir.

In her senior thesis, Meyer explores the interrelation between German composer Richard Wagner’s series of operas “Ring of the Nibelungen” and English author J.R.R. Tolkien’s trilogy of novels “The Lord of the Rings.”

“I was struck by my reaction to Wagner in light of knowing ‘The Lord of the Rings,’” she said. “I thought the two works could be illuminated by each other. They are very different, but they pull elements from the same mythic material.”

When Meyer first became interested in studying Wagner, she enrolled in an introductory German course during her sophomore year at Princeton. She had been struggling with the pronunciation of German in connection with her singing, and decided it would be better to undertake a formal study of the language.

She then began exploring the relationship between words and musical structure in opera in her junior independent work, which was supervised by John Fleming, the Louis Fairchild ’24 Professor of English and Comparative Literature. She examined the interaction between music and text in Jacques Offenbach’s “Les Contes d’Hoffmann” and Richard Strauss’ “Der Rosenkavalier.”

“Her subject was one that has been hotly debated since the 18th century, when it was taken up by such theorists as Rousseau,” Fleming said. “The finished paper was bold, witty, highly original and, to me, illuminating.”

Her senior thesis builds on that work, exploring the conflicts and ambiguities in Wagner’s opera over questions of ultimate salvation, said Leonard Barkan, the Arthur Marks ’19 Professor of Comparative Literature and one of Meyer’s thesis advisers. It also examines parallel questions about Christian faith, pagan worlds and the possibilities of salvation in “The Lord of the Rings,” according to Barkan.

“She has come to understand that there are ways of reading text and music both with and against each other so as to help illuminate the problematic ending of Wagner’s opera,” Barkan said. “The thesis is enormously promising, and its relation to Meg’s reading and performing experience make it an especially clear case of what comparative literature can offer.”

Meyer is hoping to enroll in a master’s degree program in vocal performance next year.