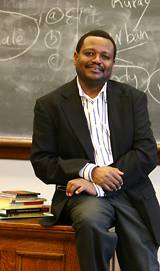 Simon Gikandi, a professor of English who joined the faculty last fall, thrives on crossing boundaries to make connections in literature between seemingly disparate topics.

From the April 18, 2005, Princeton Weekly Bulletin

Professor of English Simon Gikandi is a literary sleuth. His favorite academic pursuit is uncovering connections in literature between topics that appear to have nothing in common.

He applied his skills at unmasking relationships, for example, to the emergence of high cultural tastes in 18th-century England, a period when aristocrats and intellectuals were consumed with supporting and pursuing artistic endeavors, and discovered a strong, unseen link to slavery.

“The intellectuals behind that movement said that what made their culture unique was that it was disinterested, not connected to anything else,” said Gikandi, who joined the Princeton faculty last September. “I was surprised and delighted to discover that the ‘theory of taste’ as disinterested emerged precisely because intellectuals and writers were aware that most of the money enabling this new lifestyle was coming from the slave trade.”

Patron of the arts William Beckford, for example, who was considered the wealthiest man in England during this period, came into his fortune through his father’s sugar plantation in Jamaica. The Barrett family, which produced acclaimed British poet Elizabeth Barrett Browning, also hailed from Jamaica, where it owned lucrative plantations that used slave labor.

“I’m interested not only in how money from slavery enabled those cultures of taste, but also how the cultures of taste disconnected themselves from that money using a kind of intellectual laundering, similar to the way drug money is laundered,” he said.

Gikandi’s study of the links between slavery and European intellectuals is included in the book he currently is writing, “Slavery and the Culture of Taste.” An excerpt recently appeared in Michigan Quarterly Review.

Gikandi specializes in the history of the novel as a genre with a particular focus on the English-language literature of post-colonial areas such as Africa, India and the Caribbean. He also studies cultural and literary theory.

“Simon’s work is enormously engaging, erudite and nuanced,” said Claudia Johnson, chair of the English department. “Unlike many critics, who talk about English literature purely as a supposedly ‘civilizing’ tool of empire, Simon shows that African literatures also engaged with the traditions of English literature and in the process transformed it.”

Gikandi is the author of “Writing in Limbo: Modernism and Caribbean Literature,” “Reading Chinua Achebe” and “Reading the African Novel.” He served as co-editor of “The Cambridge History of African and Caribbean Literature,” published in 2004, a comprehensive survey of several centuries of writing in English, French, Arabic, Spanish, Portuguese and several major African languages.

His teaching at Princeton has focused on the novel and colonialism. In the seminar he is teaching this semester, “Writing Race and Nation: The South African Example,” Gikandi explores the notion that much of post-colonial literature is a rewriting of canonical texts.

“Writers are first and foremost readers, and they emulate each other, echo each other and rewrite each other,” he said. “We give this literary borrowing a fancy word — intertextuality — but it is through these intertextual relationships that literature is transformed.”

Gikandi emphasizes that the borrowing goes both ways. “Especially in the late 20th century, English writers in England began to borrow from writers in the colonial tradition,” he said.

Canonical texts spoke to those in the colonies in surprising ways. Eighteenth-century plantation workers in India put on productions of “Romeo and Juliet” because the British were trying to ban a Hindu practice called “sati,” which decrees that when a woman’s husband dies, she has to commit suicide. The British thought the practice was barbaric, but Indians saw Juliet’s suicide as a form of sati.

In his pursuit of unseen connections, Gikandi has explored the numerous ways that the literature of post-colonial areas is connected to English fiction. He found that despite the image England has traditionally held of itself as isolated and uncontaminated by the rest of the world, some of the central texts of English literature are embedded with colonial themes.

“The identity of England and its literature has always been shaped by what was happening in the colonies — on the margins, so to speak,” Gikandi said. “The English at one point occupied two-thirds of the globe, and yet they tried to sustain the image of a pure English identity and literature untouched by these other elements.”

In his book “Maps of Englishness: Writing Identity in the Culture of Colonialism,” published in 1996 by Columbia University Press, Gikandi writes about the colonial themes in the works of some of England’s most prominent authors. In the sequel he currently is writing, to be titled “The Novel and Social Reform,” Gikandi explores the colonial elements in the novels of Charles Dickens and Jane Austen.

Austen is viewed as a novelist of the domestic world, but Gikandi argues that some of her major works were consciously or subconsciously influenced by events in the colonies.

In “Mansfield Park,” the family patriarch has to travel to Antigua to deal with a crisis occurring among the slaves on the family’s plantation. It is during his absence that his children revolt and the household is in turmoil. When he returns, order is restored.

“The domestic crisis is instigated by the absence of the paternal figure, who has gone to control the slaves,” Gikandi said.

Past readings of the book viewed the upheaval in Antigua as tangential to the story, Gikandi said, but he believes that “what appear to be peripheral events were at the very center of what’s taking place in this novel.”

Most of the scholarship on Dickens’ “Great Expectations,” Gikandi said, has not paid adequate attention to the background of the character Magwitch, the benefactor who enables Pip to join the middle class. Magwitch is a convict who has been banished to Australia.

“Pip doesn’t want to make the connection between his new wealth and its source, so he convinces himself that Miss Havisham is his benefactor,” Gikandi said. “When the convict comes back and says to Pip, ‘I made you a gentleman,’ Pip is disgusted by that contamination. When you examine the text with this in mind, you see the whole novel is about self-deception.”

Those kinds of discoveries are exhilarating for Gikandi.

“My work thrives on the transgression of boundaries,” he said. “My happiest moments are when I can bring things together that people thought could not be brought together.”