Seniors celebrate a day of honors, memories and laughs 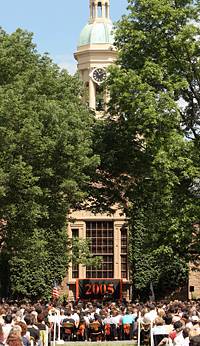 Seniors and their families gathered on Cannon Green behind Nassau Hall for the annual Class Day ceremony. 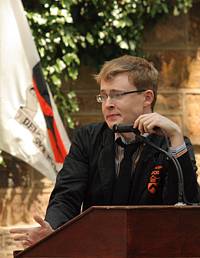 Senior Patrick Cunningham delivered his speech in an exaggerated theatrical tone, waxing poetic at times.  At left: Students reacted to a line in Cunningham's address. 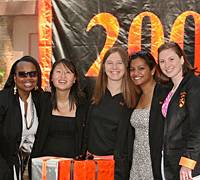 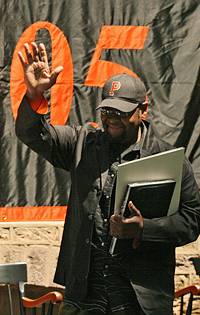 The seniors named five people as honorary members of the class of 2005, including Charles Jones, who works in dining services at the Butler Wilson dining hall. 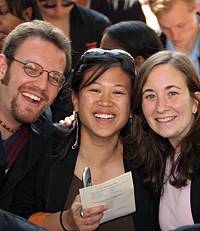 Seniors enjoyed some of their last moments together as a class during the ceremony, which took place the day before Commencement.

Below left: Comic actor Chevy Chase, who gave the keynote speech, made a joke while senior A. Shoum Chakravarti, Class Day co-chair, looked on.

Members of the class of 2005 honored the achievements of their classmates and evoked lessons from their four-year Princeton journey during the annual Class Day ceremony Monday, May 30, on Cannon Green.

"We have had four great years of being challenged in ways we never thought we could ever be challenged," said Azalea Kim, senior class president.

The Class Day ceremony included the presentation of awards for leadership, athletics and community service as well as humorous addresses from several students mixing their memories of Princeton with their hopes for the future.

"For me, I have had four great years of living out an opportunity that was not available to my parents, who were raised in post-war Korea," Kim said. "I've had four great years of realizing that I don't know what it really is like to be black, white, Hispanic or to have lived abroad, or to be anyone but who I really am. But I have lived vicariously through all of you, and the perspective I have gained will stay with me for the rest of my life." 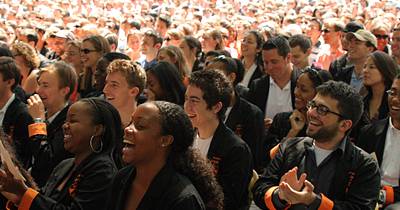 Senior Bradford Lyman said that he turned to Princeton students' profiles on www.thefacebook.com, a popular online directory, in trying to describe how the University had changed since his father graduated 35 years ago.

"My father may think that Princeton kids haven't had a reason to rebel since the 1960s," Lyman said. "But thefacebook.com will reassure him that modern Princetonians are still going to protest. In fact, we have 36 groups 'against' something."

Lyman said students from current and older generations share a bond through Princeton in "the diversity of our passions, our pleasures and our pursuits. We will truly never find another place quite like it."

Another senior speaker, Patrick Cunningham, added that "this place gave you everything it could, took from you all you could possibly give."

Delivering his speech in an exaggerated theatrical tone, Cunningham told his classmates that the experience of attending Princeton would be just the start a lifetime marked by unquenchable thirst for knowledge and exploration.

"Your desires will be sharpened until they stick in your gut like needles. Whew, that was poetic, guys."

Princeton President Shirley M. Tilghman told the graduating seniors: "You arrived as strangers in the fall of 2001 from 40 countries around the world and now you leave as a coherent whole -- the great class of 2005."

"Just when you're really getting to know each other, you must say farewell," Tilghman said. "For the most part, your daily contact will end and your lives will be filled with other faces and other concerns. New students will take your seats in the classrooms and the laboratories. Yet as the alumni who turned our campus into a festive sea of orange and black last week attest, you will forever be Princetonians -- and Princeton will always, always welcome you back with open arms." 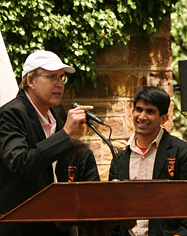 Chase, a member of the original "Saturday Night Live" cast and the star of movies such as "Caddyshack" and "Fletch," joked that he was not up to the task of offering sage advice to the graduating seniors. Recalling his own graduation from Bard College, Chase said his father counseled him that a sense of humor is a person's most important quality.

"A sense of humor is a sense of perspective. It's a way of gauging what's important in life and what's that much less important," Chase said. "If you don't have a sense of humor, you're going to … have a nervous breakdown by the age of 30."

Other honorary members of the class of 2005 include Tilghman; Don Betterton, director of undergraduate financial aid; Charles Jones, who works in dining services at the Butler Wilson dining hall; and actor/director Ben Stiller, who participated in a program on campus in April to kick off senior week.

Princeton's graduation activities culminate May 31 with Commencement ceremonies at 11 a.m. on the lawn in front of Nassau Hall.

Students honored for service and achievement at Class Day