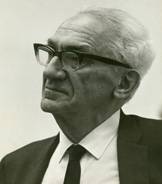 The papers donated to the Princeton University Library include a July 8, 1946, letter (below) that Albert Einstein wrote to Immanuel Velikovsky (above) after reading an early version of what became the book, "Worlds in Collision" (1950). 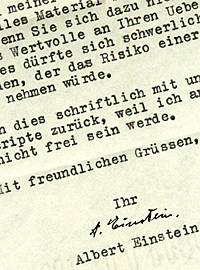 The papers of Russian-born American scientist and author Immanuel Velikovsky have a new home in the Princeton University Library. His daughter, Ruth Sharon of Princeton, has donated the papers for use by researchers.

Velikovsky, who lived from 1895 to 1979, is best known as the author of a number of controversial books, primarily arguing that ancient myths, legends and accounts of catastrophic events related in the Bible and other texts have a basis in fact.

Velikovsky earned his M.D. degree from the University of Moscow in 1921 and lived in the 1920s and '30s with his family in Palestine, where he pursued a specialization in psychoanalysis and psychotherapy. He moved to the United States in 1939 and began his research on the history of Egypt, Greece and the Jewish past. He lived first in New York City and later in Princeton.

"Decades of bitter debate resulted from his controversial theories about cosmological catastrophes, particularly in regard to the planet Venus, and his interpretation of historical, geological and paleontological evidence," said Don Skemer, curator of manuscripts in the library's Department of Rare Books and Special Collections.

Harlow Shapley, Cecilia Payne-Gaposchkin, Carl Sagan and other members of the American scientific establishment were among Velikovsky's critics. The controversies over Velikovsky and publication of his work have been the subject of several books, including Alfred De Grazia's "The Velikovsky Affair: The Warfare of Science and Scientism" (1966) and Donald Goldsmith's "Scientists Confront Velikovsky" (1977).

The Immanuel Velikovsky Papers comprise 156 boxes of published and unpublished manuscripts and drafts, subject files, lectures, personal and professional correspondence, and legal documents dating from the 1920s to the 1990s. The collection includes his extensive correspondence with Horace Kallen, Ted Thackrey and other friends, as well as selected letters from Albert Einstein, Helen Dukas, Sigmund Freud, Carl Jung, Eugen Bleuler, Chaim Weitzmann, Harold Urey and other scientists and academicians.

The Immanuel Velikovsky Papers are available for research use in the library's manuscripts division in the Department of Rare Books and Special Collections. An online description of the papers is available. For more information about the papers, contact Skemer.