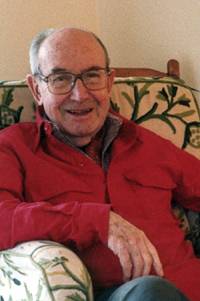 Jeremiah S. Finch, a professor emeritus of English at Princeton who made an indelible mark on the University through his service in two key administrative roles, died Thursday, Aug. 25, in Jamesburg, N.J. He was 95.

Thomas Wright, who succeeded him as secretary, said that Finch excelled at his work because of the way he inspired people and paid attention to details.

"He was one of the loveliest, sweetest, kindest people in the world," said Wright, secretary of the University from 1974 until 2004. "Jerry was an exceptional motivator because people were so fond of him. People worked very hard because he was so generous, thoughtful and kind."

Wright said that Finch was extremely meticulous in his efforts to maintain the minutes of the Board of Trustees and other official records of the University. "He was a wonderful stickler for precision and correct grammar and word usage," he said. "He considered that one of his responsibilities as secretary of the University -- to make sure that all official University documents and materials set a high standard."

As dean of the college, Finch was responsible for overseeing undergraduate studies and curriculum and for administering the various services and agencies to promote the academic development of undergraduates. Those who followed in his footsteps remember the wise counsel he provided.

"Jerry Finch was the first of the modern deans of the college," said Nancy Malkiel, who has served in that role since 1987. "While the office was first established in 1909, the portfolio of the dean changed markedly over the next 45 years. The fundamental responsibilities of the deanship as we recognize it today date to Jerry's incumbency.

"For this dean, as I am sure was the case for my predecessors, Jerry functioned as the wisest, most generous, most supportive mentor and friend," she said. "He will be greatly missed."

Finch, a native of Albany, N.Y., was born April 27, 1910. Before joining the Princeton faculty, he taught at Cornell University, where he received his bachelor's degree in 1931, master's degree in 1933 and doctoral degree in 1936.

At Princeton, he led classes in English literature until his retirement in 1975. He was the author of works on the life of Sir Thomas Browne (a 17th-century English doctor and writer) and of articles for scholarly journals on medical history, English literature, teacher preparation and liberal education.

"Jerry Finch was a wonderful gentleman with the kind of erudite academic training and breadth of reading characteristic of the great generations of literary scholarship," said John Fleming, the Louis Fairchild '24 Professor of English and Comparative Literature.

"As the person who in his role as secretary signed my letter of appointment he was the first Princeton administrator with whom I had memorable contact, and he always typified for me the quiet and graceful efficiency of the remarkable group of people who, year after year, make this place run so well," Fleming said. "Although he had already taken up full-time administration by the time I met him, he remained until his retirement an effective friend of the English department and a gentle mentor to a succession of junior faculty lucky enough to encounter him."

Finch also wrote several works on the history of Princeton University, and played a significant role in the publication in 1978 of "A Princeton Companion," a reference book by Alexander Leitch. He was made an honorary member of the Princeton classes of 1931 and 1942.

A. Scott Berg, a 1971 Princeton graduate and best-selling author, recalled working with Finch when he was chair of his Class Day arrangements. "I remember spending more time in his office in Nassau Hall than I had to, simply because he was such charming company, so full of vitality," Berg said. "I vividly remember his boyish enthusiasm for everything we were planning.

"Graduation that year, you see, followed the scaled-down, war-protest graduation of 1970 -- when most of the more light-hearted activities on the graduation agenda had been deleted and few seniors had even worn caps and gowns," Berg said. "So, as I was planning such things as the Senior Prom and the clay pipe-breaking ceremony, he reveled in recalling the traditions, so that we might reward seniors with some of the fun that had recently been lost."

Berg connected with Finch again in 2001 at a Friends of the Princeton University Library event. "… when we got together, he immediately broke into his big smile and started talking about our 'work' together in 1971," Berg said.

Finch served as a trustee of the Danforth Foundation and of Ripon College, from where he received an honorary degree in 1980. He also was president of the Middle States Association of Colleges and Secondary Schools and a member of the Council of the American Association of University Professors.

Finch was a board member of several local educational organizations and member of the Princeton Small Animal Veterinary Endowment (SAVE). During retirement, he read for the blind and contributed to the monthly newsletter at Monroe Village in Jamesburg, N.J., where he lived for the last 10 years.

Finch was a lover of nature and spent many summers in the Adirondack Mountains. He was married to the late Nancy Goheen of Princeton. Survivors include two daughters by a previous marriage: Anne Finch-Fakundiny of Rensselaer, N.Y.; and Abigail Finch of Round Hill, Va.

A private interment will take place in Fort Ann, N.Y. In lieu of flowers, the family has asked that donations be made to: the Jeremiah Thomas Finch (1940-1946) and Jeremiah Stanton Finch (1910-2005) Memorial Book Fund, c/o the Princeton University Library, 1 Washington Road, Princeton, NJ 08544; or the Small Animal Veterinary Endowment (SAVE), 900 Herrontown Road, Princeton, NJ 08540.