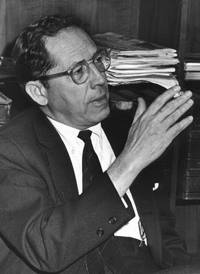 A memorial service for Edmund King, a noted teacher, scholar and translator of Spanish literature, is set for 11 a.m. Monday, Jan. 9, at All Saints' Church in Princeton.

King, the Walter S. Carpenter Jr. Professor in the Language, Literature and Civilization of Spain Emeritus, died Dec. 25 at his home in Laredo, Texas, at age 91. After more than a half-century in Princeton, he had moved to Texas a year ago following the death of his wife, Willard, in November 2004.

Recruited to join the Princeton faculty in 1946, King was one of several young scholars and students of Spanish drawn to the University by the charismatic Spanish historian Américo Castro, who was expelled from Spain by the Franco government. Castro's work and the writings of his students and colleagues sparked a revolution in Spanish thought, making Princeton a center of Spanish studies for most of the second half of the 20th century.

King was charged by Castro to translate into English his masterwork, "España en su historia." Published in King's translation as "The Structure of Spanish History" by Princeton University Press in 1954, the work was hailed as a major achievement. "King's translation put into clear prose even the most difficult passages of Castro's text," said Ray Keck, a former student of King's who is now president of Texas A&M International University.

Born in St. Louis, Mo., on Jan. 10, 1914, King grew up in Austin, Texas. He earned three degrees from the University of Texas-Austin, completing his Ph.D. in Spanish literature in 1948. He taught at Texas from 1934 to 1936 and then at Mississippi State College until called into the military service in 1941. He served in Europe through 1945, rising to the rank of major.

Following the end of World War II, King returned to Austin and began teaching at Texas until his call in 1946 to join the faculty of Princeton. He served as chair of the Department of Romance Languages and Literatures from 1966 to 1972 and was named the first incumbent of the Carpenter professorship in 1976. When he retired in 1982, his former student, Alban Forcione, was named to the professorship.

In addition to his work as the translator of Castro, King was a recognized authority on 19th-century Spanish literature. "His book on Spanish poet Gustavo Adolfo Bécquer, and his many short pieces on Spanish Romanticism remain among the most respected writings on these subjects," said Keck, who earned his bachelor's and doctoral degrees from Princeton in 1969 and 1978, respectively.

King was one of the first scholars outside Spain to recognize the unique talent of Gabriel Miró, perhaps the most challenging and rewarding stylist in 20th-century Spanish fiction. In the early 1950s, King traveled to Spain, befriended Miró's family and began a study of Miró's work that would occupy him for the rest of his life. At the time of his death, King was preparing for publication his translations into English of Miró's two greatest novels, "Our Father Saint Daniel" and "The Leper Bishop."

A longtime lover of music, King coached the Mississippi State Glee Club during his time there, and was a member of the Princeton Society of Musical Amateurs and the Princeton Madrigal Group. He also sang with the choir at All Saints' Church.

In 1951, he married Willard Fahrenkamp, who became a faculty member at Bryn Mawr College and published important studies of Golden Age Spanish literature. After retirement, the Kings lived several years in Spain, where they each served as resident director for the International Institute in Madrid and continued their research and writing.

"From their home in Princeton and their classrooms in this country and in Spain, the Kings educated and socialized an entire generation of young scholars, inspiring in them twin devotions to Spanish culture and to clear and elegant language," Keck said.

Edmund and Willard King had no children. He is survived by several generations of noted Hispanists who were his students, including Alban Forcione, James Maraniss, Inman Fox, Luis Fernández Cifuentes, Gordon McNeer, Antonio Prieto, Lee Fontanella, Lane Kaufmann and Ray Keck. He also is survived by his caregivers of recent years, especially William Potter, Elizabeth Piccard and Rodolfo Orozco in Princeton and Patricia and Ray Keck in Laredo.

Memorial contributions may be made to a fund in King's honor for the benefit of the choir at All Saints’ Church, 16 All Saints' Road, Princeton, NJ 08540.