Class of 2009 arrives at Princeton 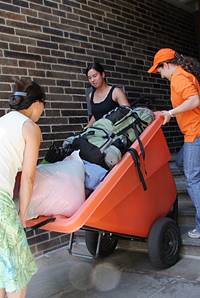 Freshman Erica Wojcik (center), who planned to go on an Outdoor Action trip, got some help moving into the dorm from her mom, Jane, and Princeton junior Julia Cain.

Below left: Members of a Community Action group made some new connections during a game before heading off to participate in community service projects.

With vehicles jammed full of suitcases, bookshelves, pillows and even couches, members of the Princeton class of 2009 began arriving on campus last weekend.

The first freshmen to move in were those involved in the Outdoor Action and Community Action programs, which this year attracted nearly 60 percent of the class. After dropping their belongings on campus, these students embarked on several days of experiential learning and getting to know their classmates during the two pre-orientation programs.

More than 580 freshmen are participating in Outdoor Action this year from Sept. 4-9. This is the 32nd year Princeton has provided students with an opportunity to transition into college life by spending time with their classmates on a wilderness camping trip. Students break up into small groups and hike, canoe and climb their way through picturesque settings in states ranging from Vermont to Virginia.

In Community Action, some 125 freshmen are spending the week involved in community service projects. This is the 19th year the Student Volunteers Council has offered the program. In groups of eight to 12, they are renovating houses, restoring city gardens, working with youth and serving meals to the homeless in Trenton, Princeton, Lawrenceville and Hightstown, N.J., and in Philadelphia from Sept. 4-10.

For both pre-orientation programs, upperclassmen provide guidance as leaders and mentors.

The full complement of the class of 2009 -- a total of 1,224 students from 49 states and 37 countries -- will be on campus to begin an orientation program on Saturday, Sept. 10. Among the first activities for the freshmen will be joining the rest of the University community at Opening Exercises at 3 p.m. Sunday, Sept. 11, in the University Chapel.