At left: Joseph Fowler (left), assistant professor of physics, and a group of graduate students have been testing components of the Atacama Cosmology Telescope on the roof of Jadwin Hall. Work with the telescope, which will be constructed in Chile, is part of a multi-institution, multinational project led by Princeton and funded by the National Science Foundation to provide students with opportunities to engage in leading edge investigation within an international research environment. 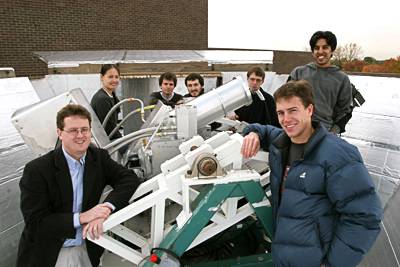 A major new grant will take Princeton researchers around the world in search of answers to some of cosmology’s most pressing questions.

The National Science Foundation has awarded a five-year, $2.35 million Partnership for International Research and Education grant to the Princeton-led Southern Optical Astronomical Survey. The multi-institution, multinational project’s goal is to provide students with opportunities to engage in leading-edge investigation within an international research environment.

“We’re hoping that this really establishes a program of international collaboration,” said co-principal director David Spergel. “Intellectually, we’re hoping to use this as a way to provide substantial research training for students — undergrads, grad students and postdocs — at Princeton, and in South Africa and Chile.”

Spergel, professor of astrophysical sciences, co-directs the project with Lyman Page and Suzanne Staggs, both professors of physics; Joseph Fowler, assistant professor of physics; and Robert Lupton, senior research scientist in astrophysical sciences. The Princeton scientists are teaming up with top physics and astronomy researchers from Rutgers University and the University of Pennsylvania and will work in collaboration with researchers at Universidad Católica in Chile and the University of KwaZulu-Natal in South Africa.

Building upon existing research efforts at Princeton, the project will provide insight into questions such as: What are the properties of dark energy? What is the mass of a neutrino? How do galaxies and their environments affect each other? What is the distribution of mass in the universe?

In search of answers, researchers will study a patch of the Southern sky that provides a snapshot of the universe shortly after the Big Bang, and integrate data from a number of different instruments.

Observations from the new Southern African Large Telescope, the largest optical telescope in the southern hemisphere, will allow participants to study clusters of galaxies to learn how they form and evolve. The telescope reported its first significant scientific results and images on Sept. 1 and will become fully operational within a few months.

Meanwhile, components of a new radio telescope, the Atacama Cosmology Telescope, currently are being tested on the roof of Princeton’s Jadwin Hall. The telescope will be constructed in the Atacama Desert in Chile — a high-altitude region known for dark skies and exceptional viewing weather. Its first scientific data is expected in late 2007. When completed, the Chilean telescope will provide the unprecedented sensitivity necessary to allow astronomers to gaze deep into space.

Researchers also will collect ultraviolet and X-ray data from satellites and incorporate existing data from NASA’s Wilkinson Microwave Anisotropy Probe, a satellite built in partnership with Princeton scientists that has captured a high-resolution snapshot of the universe in its infancy and produced dramatic insights into astronomy and physics.

Throughout the Southern Optical Astronomical Survey project, weekly video and Web conferences will enable Princeton students to interact regularly with their peers and develop the solid working relationships necessary for successful international collaboration.

With additional support from Princeton’s Institute for International and Regional Studies, Spergel also has planned a series of summer schools and workshops for face-to-face encounters. Because the participating institutions are in two hemispheres, summer school will take place every six months.

Spergel and Page, along with several graduate students, will travel to South Africa for the first school in January 2006. “There’s not really a tradition of extragalactic astronomy and cosmology in South Africa,” said Spergel. “So, for us to move into this new area is an exciting opportunity for them.”

Princeton will host the second summer school session in June 2006, a week-long meeting aimed at providing the common scientific background needed to begin the collaborative investigation. Researchers from all the participating institutions — along with Atacama Cosmology Telescope collaborators from Cardiff University in the United Kingdom, El Instituto Nacional de Astrofísica, Óptica y Electrónica in Mexico and the University of Toronto and the University of British Columbia in Canada — will be invited.

Spergel also expects to send undergraduate students to South Africa this summer, and to Chile in subsequent years, to begin observational work, which he hopes will evolve into topics for junior papers and senior theses. “I think this will be a really nice way to send some physics and astronomy students to do their junior year abroad,” said Spergel.