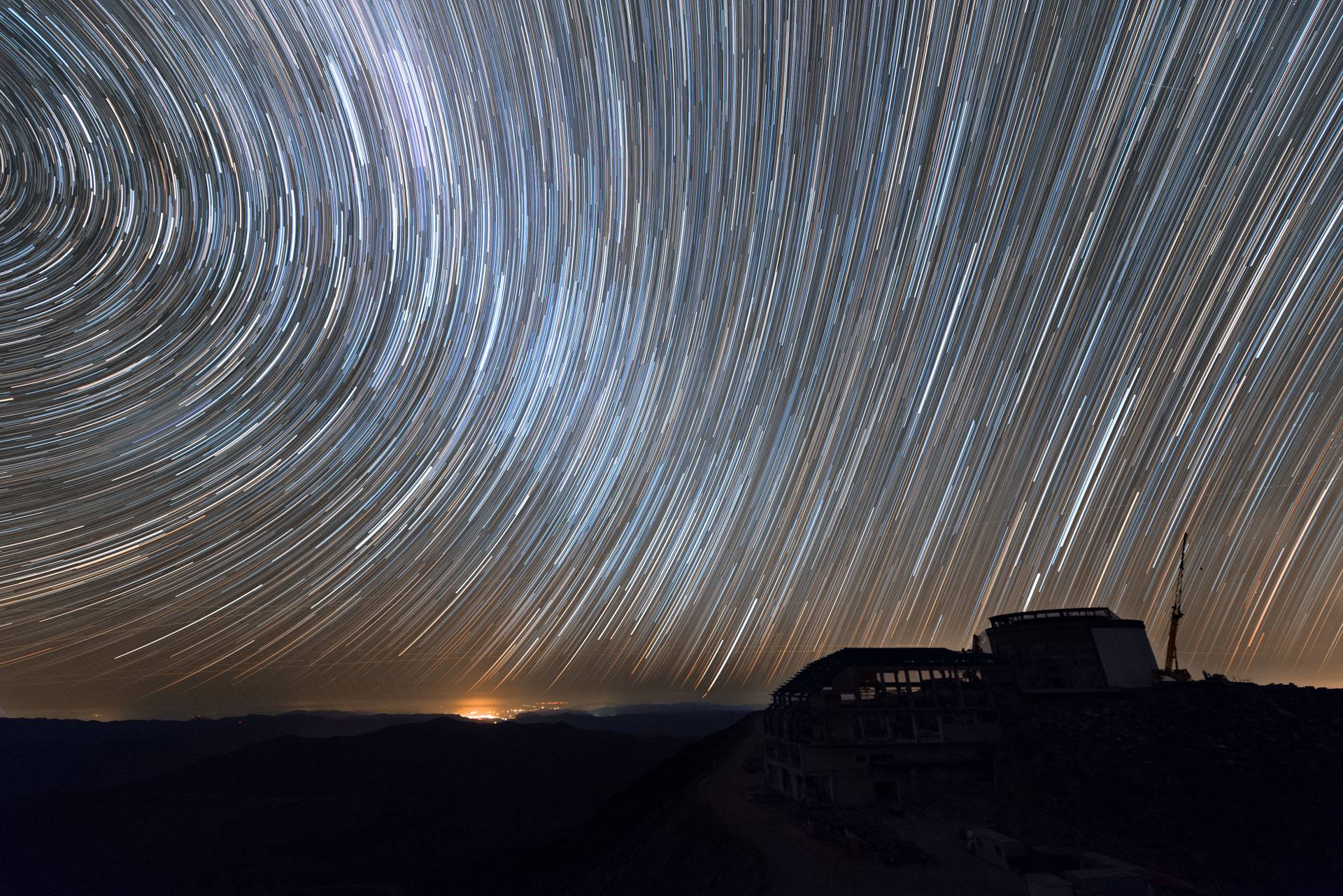 Researchers at Princeton University and the University of Washington have developed an automated scheduler for the Large Synoptic Survey Telescope, which is under construction on the remote Cerro Pachón ridge in the Chilean Andes.

Under construction on a remote ridge in the Chilean Andes, the Large Synoptic Survey Telescope (LSST) will boast the world’s largest digital camera, helping researchers detect objects at the solar system’s edge and gain insights into the structure of our galaxy and the nature of dark energy.

The telescope’s extraordinary power is attracting scores of researchers worldwide, each with their own observational needs and timescales and all contending with sporadic cloud cover and other variable conditions. In short, it’s a major scheduling challenge.

An automated telescope scheduler developed by researchers at Princeton University and the University of Washington aims to maximize the LSST’s efficiency over the span of its operation, which is currently planned for 10 years beginning in 2023. The scheduler was presented in an article in The Astronomical Journal.

The team includes Robert Vanderbei, a professor in Princeton’s Department of Operations Research and Financial Engineering, and Elahesadat Naghib, who graduated with a Ph.D. from the department on June 4.

The Large Synoptic Survey Telescope will boast the world’s largest digital camera, helping researchers detect objects at the solar system’s edge and gain insights into the structure of our galaxy and the nature of dark energy.

Because various groups of researchers will require images of different parts of the sky taken at specific intervals, said Naghib, some astronomers have joked that the objective of the project is “to keep everybody equally unhappy.” She and her colleagues strove for fairness in devising an algorithm for the automated scheduler, she said.

The demand for the LSST’s images in the international research community makes the need for a flexible, objective scheduler particularly acute.

“Building a telescope with a really wide field of view and high resolution, and putting it in a desert in Chile where the weather is good pretty much all the time, is amazing,” said Vanderbei. “In the world of astronomy, everybody’s excited about LSST. It’s the main thing.”

“We will scan as much of the sky as we can every night,” said co-author Peter Yoachim, a staff scientist for the LSST and a research scientist at the University of Washington. “We’ll be able to see all kinds of things that change, like supernovae that explode and asteroids that move.”

Vanderbei and Naghib began working on the scheduler after hearing about the problem from Robert Lupton, a senior research astronomer in Princeton’s Department of Astrophysical Sciences. Lupton is leading a group creating a pipeline for handling the vast amounts of data that the LSST will collect.

“The science depends critically on how we take the data,” said Lupton. A sophisticated scheduler allows the research community to “step back and look at problems globally,” allowing progress on competing scientific objectives.

The scheduler will collect real-time data on factors including cloud cover, sky brightness and astronomical “seeing” — the amount of star twinkling caused by Earth’s atmosphere, which can affect the resolution of telescope images. While cloud cover is relatively rare at the LSST site in the Atacama Desert, one of the driest places on Earth, clouds are still a concern for the telescope’s operation. 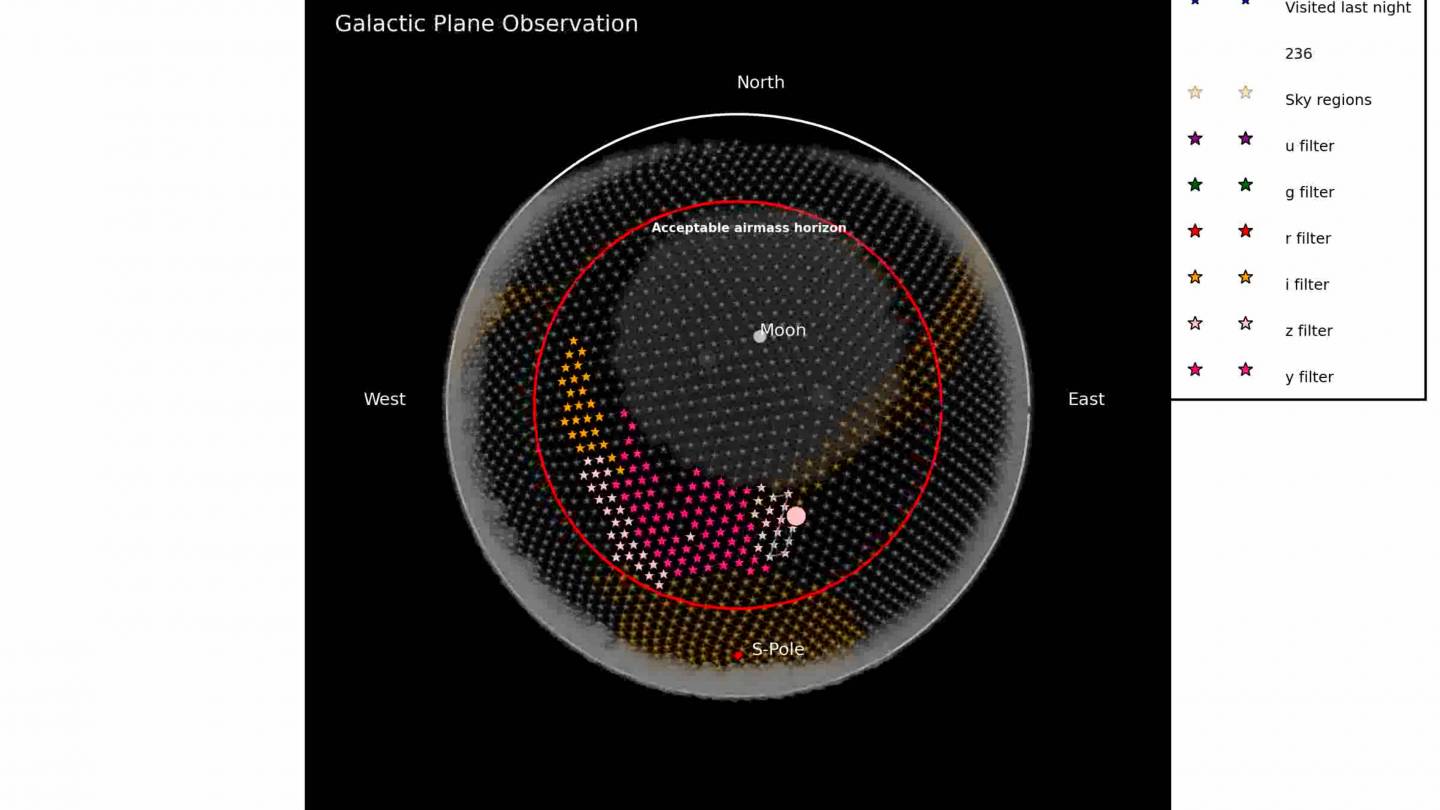 This video simulation shows how a scheduling algorithm developed by researchers at Princeton University and the University of Washington would enable the Large Synoptic Survey Telescope to survey the entire southern sky every three nights. The simulation shows which points in the sky the telescope would have observed over the course of six nights, using weather data recorded from June 28 to July 3, 2015. The algorithm gives lower priority to points observed during the previous night (dark blue), as well as points obscured by clouds, moonlight or the haze of the horizon. Observation points are marked in six different colors to represent the filters that allow the transmission of different wavelengths of light, including ultraviolet (u), visible (g and r), and near-infrared (i, z and y).

At each moment of the night, these measurements will help a decision-making algorithm determine where in the sky the telescope should point and which filter it should use to capture an image. The LSST will use six filters that allow the transmission of different wavelengths of light, ranging from ultraviolet to near-infrared. The light spectra emitted by astronomical features such as supernovae — exploding stars — can reveal key information about their origins and chemical composition.

Most existing schedulers for ground-based telescopes allocate set amounts of time to observing different regions of the sky based on proposals from teams of astronomers, and use algorithms that check only whether an area of interest is in acceptable conditions — for instance, it must be sufficiently visible above the horizon.

With such a predetermined sequence, the telescopes have no way to account for issues such as cloud cover, said Naghib, the study’s lead author. “But because we’re making a real-time decision, the LSST can actually evaluate the clouds and be able to keep observing, whereas previously they would have to shut down the whole observatory when the night was cloudy,” she said.

In addition to accounting for weather and other variable conditions, the scheduler incorporates information about the length of time required for the telescope to rotate from one field of view to another. Optimizing the efficiency of these movements is particularly important for the LSST because it will change positions faster than previous telescopes, and therefore make more observations in a given time.. Each night, the scheduler will prioritize points of the sky not observed during the previous night, enabling the telescope to observe the entire southern sky every three nights.

The algorithm will also aim to meet specific observation requirements for four defined large areas of the sky visible from the LSST’s location. For example, the region known as the North Ecliptic Spur includes objects in our solar system. Distinguishing the movements of asteroids and other solar system features from more distant phenomena in the same field of view requires the use of paired images taken 20 minutes apart.

“One of the challenges in this project is that different regions of the sky have different constraints and different objectives, and we have to respect all of those based on what they require,” explained Naghib, who spent a semester working with astronomers at the University of Washington to refine the scheduler’s functions.

Other features of the scheduler include the ability to recover from technical interruptions, both expected and unexpected, and built-in flexibility that allows researchers to adjust the algorithm as scientific objectives change. It provides a framework that can be applied to other telescopes in the future, said Naghib.

This work forms the basis for the LSST’s scheduler, which the project’s software engineers are working to implement in preparation for the telescope’s initial testing and verification in 2021.

"A Framework for Telescope Schedulers: With Applications to the Large Synoptic Survey Telescope" by Elahesadat Naghib, Peter Yoachim, Robert J. Vanderbei, Andrew J. Connolly and R. Lynne Jones was published March 22 in The Astronomical Journal, Volume 157, Number 4 (DOI: 10.3847/1538-3881/aafece). The research was supported in part by the National Science Foundation (1258333) and the U.S. Department of Energy (DE-AC02-76SF00515).