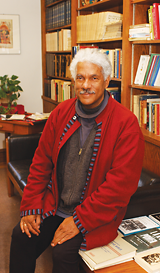 Princeton Professor Albert Raboteau, one of the nation's foremost authorities on African-American religious history, was honored Jan. 16 for his efforts to continue the journey to achieve Martin Luther King Jr.'s vision for America.

Raboteau, the Henry W. Putnam Professor of Religion, was presented with the MLK Day Journey Award for Lifetime Service during ceremonies commemorating King's legacy in Richardson Auditorium of Alexander Hall.

"Professor Raboteau is a source of inspiration for all who wish to build the kind of society that Dr. King envisioned, a society in which the life of the mind and spirit propel us toward each other rather than apart, where suffering, if it must occur, is redemptive rather than destructive," said Princeton President Shirley M. Tilghman in presenting him with the award.

Members of the University community nominated candidates based on their support for King's philosophy and teachings and their contributions to the improvement of civil rights and/or human rights. Preference was given to candidates who have positively affected the Princeton University campus and/or community. Members of the MLK Day Committee judged the nominations, and Tilghman selected the finalists. The annual award, which was first presented last year, includes a commemorative plaque and an engraved wristwatch.

Raboteau came to Princeton as a visiting professor in 1982 and joined the faculty a year later. He chaired the Department of Religion from 1987 to 1992 and served as dean of the Graduate School in 1992-93.

Raboteau is the author of several books, most notably "Slave Religion: The 'Invisible Institution' in the Antebellum South," which has become a classic in its field.

"Through this work and others, he has given generations of African Americans a voice that must be heard if our nation's future is to be more inclusive than its past," Tilghman said. "In his role as a teacher and an administrator, Professor Raboteau has also helped to make historically invisible members of American society as visible as possible, reminding us -- and here I use his own words -- 'that higher education needs the excluded and underrepresented for the perspectives, diversity and insight they will bring to the dialogue which is education.'"

Raboteau also has written an autobiography, "A Sorrowful Joy," in which he describes the death of his father in a racial incident three months before he was born as well as his own encounters with prejudice. "Like Dr. King, he has not allowed the prejudice of some to compromise his faith in the 'common humanity' of us all," Tilghman said.

She also credited him with fostering "a climate in which African-American scholars and scholarship can flourish." Cornel West, the acclaimed teacher and scholar who is the Class of 1943 University Professor of Religion at Princeton, called Raboteau "the godfather of us all."

"His affect and influence on students is immeasurable, yet those of us who are African-American alums, in particular, understand that our Princeton experiences would have been sorely lacking had it not been for Professor Raboteau and his legacy," wrote Kenneth Bruce, a 1983 Princeton graduate, in his nomination.

Eddie Glaude, who earned a Ph.D. in religion from Princeton in 1997 and has returned as a faculty member in the department, wrote: "Professor Raboteau has been so central to my development as a scholar and as a human being. His scholarship and his work in his church reveal the kind of character consistent with King's vision." Several years ago, Raboteau helped form a church in Rocky Hill, N.J.