The Princeton Katzenjammers will perform selections from their diverse repertoire during "KatzenJam 2006," which is scheduled for 7:30 p.m. Saturday, April 8, in Richardson Auditorium. Members of the a cappella group include, from left, junior Amy Coenen, senior Jackson Murley and junior Pam Testani.

At left: Members of the Katzenjammers, who perform regularly in arch sings around campus, prepare for "KatzenJam 2006" with a rehearsal in the East Pyne arch.

The Katzenjammers, founded in 1973, are the country's oldest coed collegiate a cappella group, with a repertoire spanning from their signature vocal jazz to pop to classical.

The group performs regularly in arch sings around campus and has toured extensively throughout the United States and abroad. Every four years, the Katzenjammers bring a "jamboree" concert to the Richardson stage, incorporating a wide variety of a cappella music from their domestic and international tours.

"KatzenJam 2006" will feature contributions from a student jazz trio and from the diSiac Dance Company, which will perform a ballet piece accompanying the Katzenjammers' rendition of "When I Fall in Love." The Katzenjammers also will perform a composition, "Folk Tropes," by Paul Lansky, the William Shubael Conant Professor of Music.

The Katzenjammers were founded by students who sought to establish a unique identity among existing single-sex a cappella groups. The group has produced several albums since its formation. 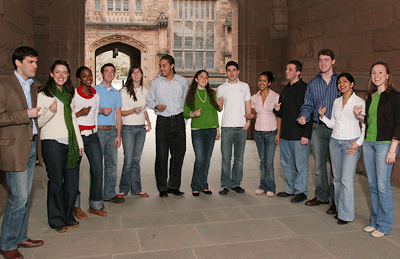 Tickets for "KatzenJam 2006" are $6 for students and senior citizens and $10 for others. They can be purchased online through University Ticketing or by calling the Richardson ticket office at (609) 258-5000.

Celebrating the heritage of Mexican dance