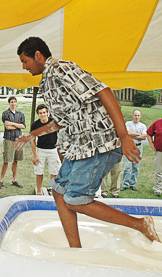 Allan Van Morter of Trenton Central High School and other students in the Princeton University Preparatory Program's physics course recently tested the properties of Oobleck -- a blend of cornstarch and water that can act as a fluid or a solid -- by trying to run across a kiddie pool full of the sticky mixture. The course was part of a range of academic challenges offered by the summer program, which helps area high school students from disadvantaged backgrounds prepare for college.

Below left: Jason Klugman (right), who coordinates the program, joined students in examining the Oobleck mixture.

Two dozen high school students who are spending the summer at Princeton University gathered on a warm July afternoon in front of a large kiddie pool filled with what looked like an immense batch of Elmer's Glue. The experiment they were about to undertake would invest them with a sense of wonder at the marvels of the physical world.

The project was part of a physics class in the Princeton University Preparatory Program, which brings 70 students from Princeton, Trenton and Ewing who are academically talented and from disadvantaged backgrounds to campus for three summers of intensive academic experiences.

The mixture in the 10-foot-long pool was a concentrated blend of cornstarch and water affectionately known as Oobleck. This cunning material sometimes acts like a fluid -- dripping over the edge of a table when spilled, for example -- but if you take a hammer to it, it will shatter into pieces. The students were going to treat the Oobleck as a solid by attempting to run across the length of the pool without falling in. 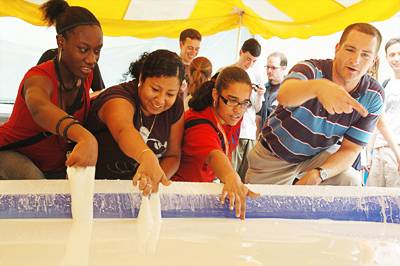 Eric Fountain, a graduate student in physics at Princeton and the mastermind of the Oobleck experiment, said he hoped the students would take away "a sense of astonishment about the world in which we live. They are learning to think like scientists and to generate hypothesis about phenomena they don't understand. For the Oobleck experiment, the goal was to teach the students that the world is not as simple as, 'this is a liquid, solid or gas,' and hopefully that will lead them to ask more questions about a world they thought they understood."

"Yeah, I'm getting in there," said Mikkyla McLean, who will be a senior at Trenton Central High School, as she checked out the pool. A few minutes later she took a leap off a platform and tried to run across the Oobleck. She made it halfway but when she slowed down, the Oobleck started to act like a liquid and she sunk, her legs covered with the white sticky mixture. The crowd cheered her efforts.

"It was fun, but it's hard to move," she said afterward as she hosed down her legs. "When you try to pull yourself up, it's pulling you down."

Kamryn Austin made it all the way across -- he's on the track team at Ewing High School.

"It's experimenting, having fun and testing the limits of your body," said Austin, who will be a senior next year. "If it was for track practice, it would be good."

Over the course of three years, the students in the program develop skills and experiences needed to successfully apply to selective colleges and universities. Graduates of the program, which is in its seventh year, are attending colleges and universities around the country, including Princeton, Brown, Colgate, the College of New Jersey, Cornell, George Washington, Lehigh, Middlebury, North Carolina-Chapel Hill, Rutgers and Vassar. The program, which is administered by the University's Program in Teacher Preparation, also includes year-round academic and cultural enrichment and provides intensive support throughout the college admissions and financial aid process. 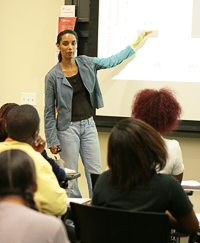 Students in the program's social science class are learning to question various issues, such as how public education is structured. Professor Cecilia Rouse, a Princeton economist, spoke to the students about school vouchers and asked them to think about what would happen to public schools in an area if vouchers to attend private schools were introduced.

"If given a choice, a lot of students would choose to go to private schools, and less and less students would attend public school," said Jerry Brioche, who will be a junior at Ewing High School in the fall. "It wouldn't shut them down, but they might deteriorate."

Rouse asked the students for ideas on how to assess school vouchers. "Suppose we wanted to understand if students who used vouchers did better. How would we design a study?" she said.

"You could give them a test," suggested Timothy Pagan, who will be a junior at Trenton Central High School.

Marquisa Blackstone, who is from the same school, pointed out that other factors were at play. "Different teachers teach different ways," she said.

The social science class is exploring issues of identity in the United States regarding race, ethnicity, social class, gender and sexuality, and the ways in which these identities can be used to include and exclude individuals. The students examine identity in the context of education, politics, health, wages and income, and immigration policy. They also participate in a group project in which they conduct empirical research.

Pagan said being in the program has benefited him in many ways. "It's helping me to be more independent," he said. "It's a lot of work, but it's helping me regulate my priorities."

Nora Abbis, too, has seen its benefits.

"It's given me a lot of time to be creative," said Abbis, who will be a junior at Princeton High School. "The environment really motivates you to talk in class and discuss things. We're exposed to so many things we wouldn't have been exposed to in school."