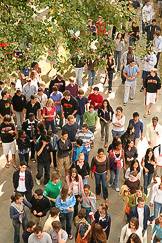 Students streamed into the University Chapel on Sunday, Sept. 16, for Opening Exercises, the interfaith service that traditionally marks the start of each academic year. Classes begin on Monday, Sept. 17.

At left: People flying colorful kites and a band of African drummers led the recession of faculty members and administrators in academic regalia. 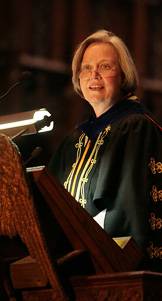 In her address, Princeton President Shirley M. Tilghman told the members of the class of 2011 they were about to embark on a "grand adventure," full of learning and discovery -- and surprises. 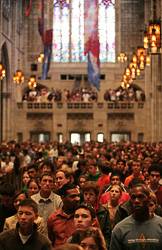 The new students and their families, as well as returning students and faculty and staff, filled the chapel.   Above left, below and bottom: Following the ceremony, freshmen participated in a "pre-rade" from the chapel through FitzRandolph Gate, giving them the opportunity to officially enter the campus to start their undergraduate experience and to be greeted by fellow Princetonians.   Photos: Denise Applewhite and John Jameson

Gazing out at the class of 2011 assembled before her in the University Chapel, Princeton President Shirley M. Tilghman described the "grand adventure" on which the freshmen are about to embark.

"Your next four years will be filled with exuberant engagement and exploration -- with ideas, with members of the faculty and with your fellow students," she said in her address at Opening Exercises on Sunday, Sept. 16.

The new students and their families, as well as returning students and faculty and staff, filled the chapel for the interfaith service that traditionally marks the start of each academic year. Classes begin on Monday, Sept. 17. 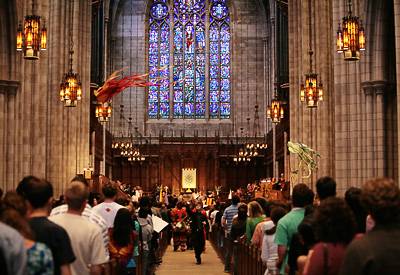 People flying colorful kites and a band of African drummers led the procession of faculty members and administrators in academic regalia into the chapel. As part of the event, undergraduate students were recognized for their academic achievements during the previous year.

For the students who are just beginning their academic work, Tilghman explained how Princeton's distinctive curriculum reflects the University's missions of educating the next generation of leaders and discovering new knowledge.

"This is a research university, after all, but what is unique about Princeton is that these two aspirations of education and scholarship are so intertwined that you truly cannot tell when one ends and the next begins," she said. "Starting with your freshman seminar and concluding with your senior thesis, you will be preparing not just to gain command of a body of knowledge, but to add to it as well." 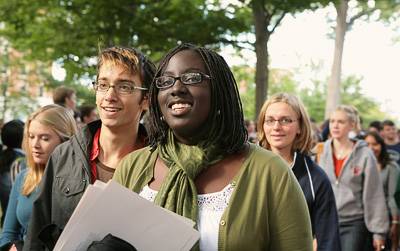 Tilghman gave her own evaluation of this "grand adventure": "The best part of an adventure of learning and discovery is that it often leads to surprises."

To illustrate her point, she began by drawing upon her experiences as a molecular biologist. During postdoctoral studies at the National Institutes of Health in the late 1970s, she made a number of groundbreaking discoveries while participating in cloning the first mammalian gene. She described her reaction the first time she isolated a particular gene as part of this research and examined its structure in an electron microscope. "I was thunderstruck…," she said. "It looked nothing like I expected."

Tilghman provided the students with several other examples from the work of Princeton faculty members:

• Katherine Newman, a professor of sociology and public affairs, who discovered in the course of writing a book about school shootings that these tragedies almost always take place in small communities and not big cities, which normally are associated with street violence and the prevalence of firearms. Newman further determined that "there is a dark underbelly to social capital that inhibits adults from circulating information about troubled kids" in these small towns, according to Tilghman.

• Simon Morrison, an associate professor of music, who learned while doing research on a biography of Sergei Prokofiev that the Russian composer originally had written a happy ending for his most famous ballet, "Romeo and Juliet." Morrison, who was granted access to Prokofiev's papers in the Russian State Archive of Literature and Art, discovered that the happy ending was censured in 1935 by Soviet cultural officials and never saw the light of day.

• Alan Krueger, a professor of economics and public affairs, who found that, contrary to widely held views, most terrorists are from reasonably well-off families and many are well-educated. According to his new book on economics and the roots of terrorism, terrorists also are not more likely to originate from low-income countries than from middle- or high-income countries. 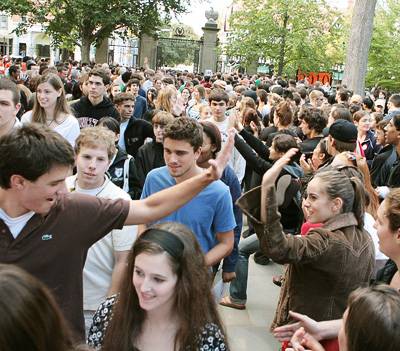 "For the next four years you will be encouraged -- and indeed sometimes even exhorted -- to develop the qualities of mind that allowed Katherine Newman, Simon Morrison and Alan Krueger to change what we know about the world," Tilghman told the freshmen.

"Those qualities are the willingness to ask an unorthodox question and pursue its solution relentlessly; to cultivate the suppleness of mind to see what lies between black and white; to reject knee-jerk reactions to ideas and ideologies; to recognize nuance and complexity in an argument; to differentiate between knowledge and belief; to be prepared to be surprised; and to appreciate that changing your mind is not a sign of weakness but of strength," she said. "We ask you to be open to new ideas, however surprising; to shun the superficial trends of popular culture in favor of careful analysis; and to recognize propaganda, ignorance and baseless revisionism when you see it. That is the essence of a Princeton education."

Tilghman concluded her address by telling the students she hoped such "adventures and surprises" would fill their years at the University.

"I hope that when you leave Princeton, you will leave saying, as so many have before you, 'This place changed my life.' Welcome to Princeton!"