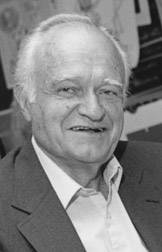 Interdisciplinary scholar and educator Steve Slaby, an expert in descriptive geometry, engineering graphics and the impact of technology on society, died July 5. He was 86.

A member of Princeton's School of Engineering and Applied Science faculty for almost 40 years before retiring in 1991, Slaby was committed to teaching his students to consider the political and social implications of technology. Keenly interested in engineering for the developing world, Slaby contributed to reconstruction efforts in Vietnam and solar energy projects throughout the Caribbean.

Slaby's academic interests extended far beyond engineering, and he took pride in serving as a member of the faculty committee for the then-Program in African American Studies.

"Steve was instrumental in developing and increasing the legitimacy of the field of African American studies," said sociology professor Howard Taylor, who chaired the Program in African American Studies from 1973 to 1987. "He developed a serious academic interest in race as an undergraduate and had an interest in righting racial wrongs. We owe a lot to him in that respect. He was also a faculty activist -- he'd speak quite openly at faculty meeting about his concerns and was one of the first to encourage the University to divest holdings in South Africa. He's going to be missed."

Cornel West, the Class of 1943 University Professor in the Center for African American Studies, said, "Steve Slaby was my dear brother. I have a great love and respect for him. He was a strong supporter of African American studies, and I was blessed to have him teach in the program when I was director. I loved his intelligence, his passion and his humor. He had quiet dignity."

Slaby was born May 22, 1922, in Detroit and received his bachelor's degree in mechanical engineering from the Lawrence Institute of Technology in 1943. After serving in the U.S. Air Force from 1943 to 1944, he went on to earn his master's degree in economics from Wayne State University in 1950.

After a year teaching engineering graphics at Lafayette College, Slaby studied labor relations as a Fulbright fellow at the University of Oslo from 1951 to 1952. He joined the Princeton faculty in 1952 as a member of the former Department of Graphics and Engineering Drawing. He chaired the department from 1961 to 1966, when it merged with the civil engineering and geological engineering departments. He was a professor of civil engineering and operations research when he transferred to emeritus status.

Slaby wrote 10 books and numerous articles on descriptive geometry, a mathematical system for visualizing the properties of three-dimensional objects used in engineering and manufacturing. He also created and led an engineering graphics seminar series in which the students wrote and published four volumes on the subject.

In his teaching, Slaby extended the boundaries of the engineering disciplines. He encouraged his students to use their knowledge of engineering to tackle societal problems in a series of interdisciplinary seminars on technology and society. To provide students with a diverse educational experience, he regularly invited professors from across the campus, including Taylor and West, to speak to his classes.

"Steve Slaby was just what a Princeton professor should be -- an inquiring and active person who challenged his students to think critically about their world and to make it into a better place," said U.S. District Judge Jerome Simandle, a 1971 alumnus who participated in Slaby's technology and society seminar.

Simandle described Slaby's cross-disciplinary approach as "unusual academic territory" in 1969. "I was fortunate to have encountered Professor Slaby, and so were several generations of Princeton students, whether engineering students or not," he said. "His pioneering efforts were at the cutting edge of what has, in recent years, become a hallmark of Princeton's interdisciplinary study of applied science and societal concerns."

Simandle's sentiments were echoed by fellow 1971 alumnus Richard Sobel, an associate in African American studies at Harvard University who was a student in Hubert Wilson's politics course in which Slaby also taught, a preceptor in Slaby's technology and society seminar, a former colleague on Princeton's faculty and a longtime friend of the Slaby family.

"Steve was one of a kind as a teacher, an innovator, a political figure, a mentor and an all-around nice guy," Sobel said. "His seminars were an absolutely unique attempt to begin to encourage engineering students to understand the social consequences of technology and to introduce liberal arts students to the intersection of technology and society through a fascinating mix of topics and people."

Slaby was a member of the American Society for Engineering Education, the scientific research society Sigma Xi and the U.S. Committee for Scientific Cooperation With Vietnam, among other organizations. In 1966, he received the Alumni Achievement Award from the Lawrence Institute of Technology.

Slaby was preceded in death by his wife of 62 years, Karin Slaby, who died in 2006. He is survived by a daughter, Kristin Slaby; a son and daughter-in-law, Stefan and Donna Slaby; and two grandsons, Justin and Jason Slaby.

An open house will be held in Slaby's honor at the Slaby residence at 469 Ewing St. in Princeton from noon to 4 p.m. on July 26. Memorial contributions may be sent to Heifer International.