Tod Williams Billie Tsien Architects, a New York firm known for its careful attention to context, creative use of materials and innovative modernist work, has been chosen to design Princeton University's new Andlinger Center for Energy and the Environment.

The firm is led by the eponymous husband and wife team, who have worked together since 1977 and been in partnership since 1986. Williams earned his bachelor's and master's degrees in architecture in 1965 and 1967, respectively, from Princeton. 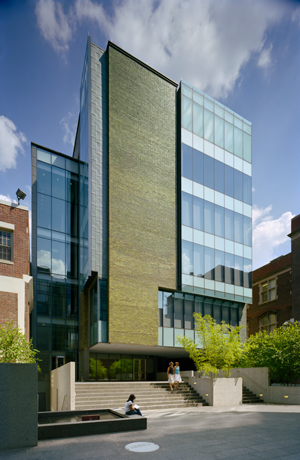 Tod Williams Billie Tsien Architects designed Skirkanich Hall at the University of Pennsylvania, which binds formerly disparate spaces by embracing the intimacy between the surrounding buildings of the School of Engineering and Applied Sciences. (Photo: Michael Moran)

Perhaps most noted for its 2001 award-winning American Folk Art Museum in New York, the firm also has designed a number of academic buildings, including Skirkanich Hall, an advanced bioengineering laboratory that opened in 2006 at the University of Pennsylvania. Inga Saffron, architecture critic for the Philadelphia Inquirer, wrote that the "meticulously designed structure" was "Philadelphia's best new building in years."

Pablo Debenedetti, vice dean of Princeton's School of Engineering and Applied Science, is pleased that the selection committee chose Williams and Tsien.

"Tod Williams and Billie Tsien have a superb track record of working closely with their clients to create spaces that combine beauty, harmonious integration with the surroundings, natural light, warmth and functionality," he said. "We are excited that they will be bringing their unique talents to the design of a building that will be a welcoming space, a state-of-the-art laboratory and a model of sustainable design."

The creation of the center was announced last summer in connection with a $100 million gift from Gerhard R. (Gerry) Andlinger, a 1952 alumnus and noted international business executive, to accelerate research on effective and sustainable solutions to problems of energy and the environment. The plan is to create a neighborhood of new and renovated facilities at the School of Engineering and Applied Science that will support research initiatives addressing a broad range of sustainable energy and environmental challenges.

The center will include a new, 110,000-square-foot Andlinger Laboratory to be located between the Engineering Quadrangle and Bowen Hall, as proposed in the University's Campus Plan. It also will incorporate 86 Olden St., which will be vacated this summer when the Fields Center moves to new quarters at 58 Prospect Ave. There will be enhanced connections to Bowen, the location of the Princeton Institute for the Science and Technology of Materials. In addition, the E-wing of the Engineering Quadrangle, the home of the Department of Civil and Environmental Engineering, will become a vital part of the center's neighborhood.

The center will provide shared laboratory facilities, including nanofabrication and clean room space, an imaging center, and labs for research involving, among other areas, photonics for combustion diagnostics, energy storage, remote sensing for environmental applications, and solar cell technology. It will include flexible lab and teaching spaces that foster collaborations across disciplines and with researchers from industry.

Research at the Andlinger Center will focus on making fundamental discoveries in engineering and applied science and moving those findings rapidly into the marketplace. Major areas of research will include improving energy efficiency and conservation; developing sustainable energy sources; and advancing carbon dioxide storage and sensing techniques that will improve the ability to reduce the amount of this substance emitted to the atmosphere.

The building will be designed as a model of sustainability both to reduce its impact on the environment and to teach students and the community about energy and environmental issues.

"The structure itself will be a pedagogical and research laboratory that incorporates sophisticated instrumentation to monitor the interaction between the built environment and its surroundings," said Debenedetti, who chairs a steering committee and director search committee for the center. "We are very much looking forward to working with Tod and Billie on the design of a building that will enable major research advances to occur in what is arguably the most important challenge of our time: meeting the world's energy needs in ways that preserve natural resources and protect the quality of the environment for future generations." 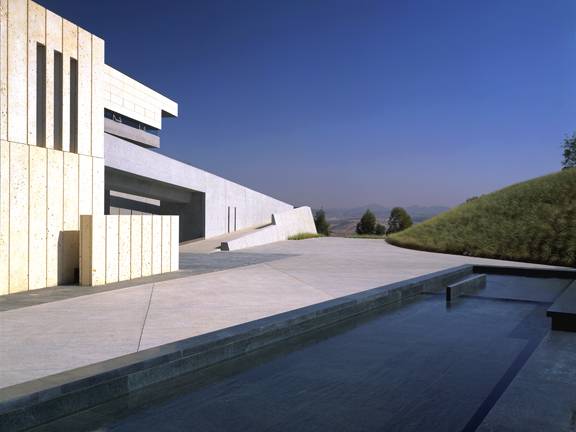 A sense of place

With Princeton announcing both a Campus Plan and a Sustainability Plan in the last year, the ability to produce sustainable design was a key factor in the selection process, according to University Architect Ron McCoy.

He pointed to the Neurosciences Institute in La Jolla, Calif., designed by Williams and Tsien and completed in 1995. The facility nestles into a three-acre sloped site near the ocean. "It received awards for energy and innovation by the way it was sited and settled into the Earth and saved energy," McCoy said. "These architects have a lot of common-sense approaches to sustainable design."

Experience and excellence in laboratory design were other criteria. At Skirkanich Hall, the architects were said to have devoted as much attention to the social spaces as they did to the laboratories, understanding how important chance gatherings are to the lively exchange of ideas.

In both of these areas, McCoy said, the firm has strengthened its repertoire by adding two teams of consultants: Arup, a global engineering firm based in London with particular expertise in energy solutions; and Transsolar, a German climate engineering firm.

A final consideration during the selection process was the firm's ability to envision the transformation of the neighborhood surrounding the Engineering Quadrangle.

"This firm is extraordinary in that regard," he added. "They've done numerous projects that are very subtle at working within existing context. These architects have a really profound appreciation for aspects of the Princeton campus that are so unique. The challenge will be to translate that understanding into the design of a new building. I'm looking forward to this work being a great example of how contemporary architects can capture the essence of the Princeton campus."

Dean of Engineering H. Vincent Poor said the selection fits extremely well with the engineering school's vision of connecting more closely with the broader University to solve complex societal problems, such as the need for sustainable energy. "Tod Williams and Billie Tsien are able to integrate buildings into eclectic groups of existing structures because of their deep sense of aesthetics," he said. "The visual connections they create among our physical spaces will promote the kind of intellectual connections that are crucial for innovative teaching and research."

Williams and Tsien have designed another building at the University -- Feinberg Hall, a dormitory completed in 1986 that is part of Wilson College. It received an American Institute of Architects honor award in 1988. 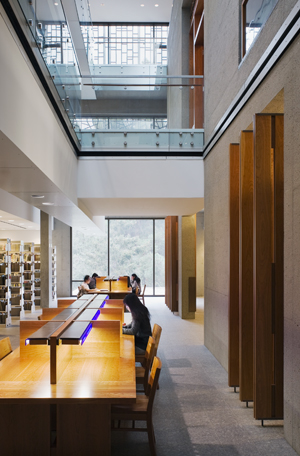 He described the neighborhood as "not at all like the main campus where buildings and their functions are united by landscape that is open and generous."

Developing a sense of place through careful siting and selection of materials is a hallmark of Williams and Tsien. The firm recently completed the C.V. Starr East Asian Library at the University of California-Berkeley. Large bronze screens on the library's main facades unify it with its neighboring buildings and allude to traditional Asian elements. The architects also used local materials, such as an aggregate concrete for the interior walls, but broke up the heaviness with tall cherrywood slats. No detail is overlooked -- even a mechanical fixture visible outside through large windows is covered by a rock garden.

"As we work with our consultants to make this state-of-the-art laboratory, we will also be working to make a place where students from all over the campus will want to gather," Tsien said. "We believe in the importance of making place. That means that our interests lie not only in the actual building itself but in all the areas around it. The Andlinger Center will be the catalyst for the making of a new garden-quad where students and faculty will find interest and respite both inside and outside of the buildings, both inside and outside of their disciplines."

A team from the University will work with the architects on the design phase of the project for at least the next two years. The start of construction will depend on additional funding and on approvals from local officials.